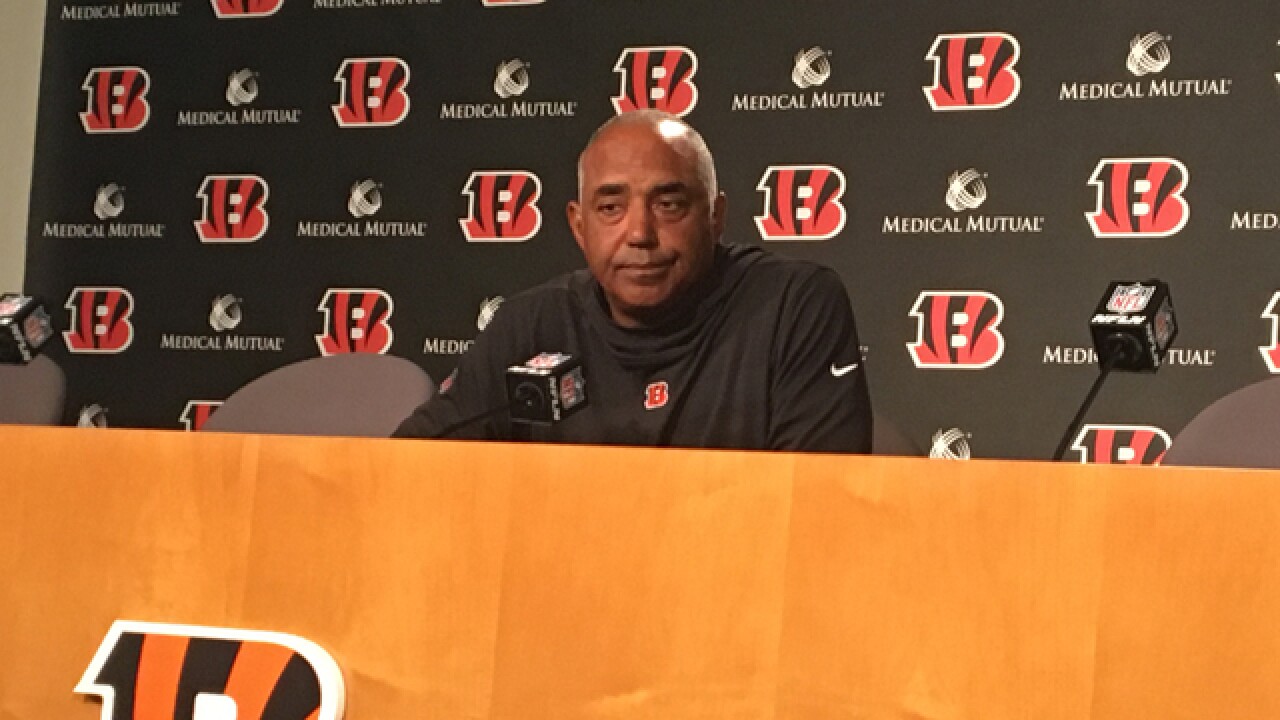 CINCINNATI -- Botched snaps, a carousel at right tackle – the Cincinnati Bengals’ offensive line continues to garner attention for all the wrong reasons.

First-round draft pick Billy Price has struggled so far at center, and no one seems ready to take control on the right side. But until Thursday, none of what has happened on the practice field through training camp really matters.

The Bengals will get their first real look at their retooled offensive line in the preseason opener Thursday against the Chicago Bears, and head coach Marvin Lewis can really begin to make some decisions after that.

“We haven't played anybody yet,” Lewis said. “You get your evaluation done (before deciding), and what we've done up to date is not a true evaluation.”

However, Lewis said in his weekly press conference Tuesday that there “is not a first (team) offensive line” at this point. The group that starts Thursday is just the first look at a set of players that could end up playing together.

The Bengals are looking especially hard at the right side, where 2015 first-round draft pick Cedric Ogbuehi also has been getting first-team reps at tackle. Jake Fisher is listed as the second-team left tackle, but saw most of his snaps last year at right tackle before a heart condition ended his season. Alex Redmond is another candidate at right guard, and Christian Westerman is listed as the backup left guard.

Lewis said some of the starters on the line Thursday could end up staying in after quarterback Andy Dalton is replaced.

“The fact that they are trying and learning somewhat new techniques is part of it right now,” Lewis said. “The opportunity is (Thursday) for them each to go out, show where they are and show their progress in where they are in the competition.”

Bengals director of player personnel Duke Tobin said before the start of training camp that the team has not given up on Ogbuehi and Fisher, who was the team’s second-round pick after Ogbuehi in 2015. Neither one has been able to get a firm grip on a job through three seasons.

However, with Glenn and Hart coming in this offseason through trade and free agency, respectively, it might be time to move in another direction. Glenn, a mainstay with the Buffalo Bills, pretty much has the left tackle job locked up, barring injury, and Lewis seems optimistic about Hart, who previously played for the New York Giants.

“He's got the experience, he's got the chip on his shoulder, and he's a guy battling for the job, battling to be a starter,” Lewis said of Hart. “He kind of checks all the boxes. He's still a very young player, a good athlete, a big man, but he still has development ahead of him, so that was the attraction to Bobby.”

Hart, a 6-foot-4, 314-pound fourth-year player, appeared in a total of 34 games with 21 starts for the Giants over the past three seasons, including 10 games with seven starts last season. He originally was a seventh-round draft pick out of Florida State in 2015, the same year Fisher and Ogbuehi were drafted.

Glenn, a seventh-year player, spent all of his past six NFL seasons with Buffalo after the Bills took him in the second round of the 2012 draft (41st overall) out of Georgia. He has played in 78 career games with 77 starts, including playing six of Buffalo’s first eight games in 2017 before injuries limited his playing time and eventually ended his season Dec. 15.

“For a big man, he can move his feet,” Bengals offensive coordinator Bill Lazor said of Glenn. “It shows up when he pulls, he can run. When he goes to reach a defensive end, he looks like he can run and get guys reached or apply techniques outside of them, and when he's in pass protection, even if a player makes a good second move on him, he can turn. For a big man, I think it's exceptional how he can redirect and get back in front of him. It's showed up over a number of years against all kinds of pass rushers.”

Glenn and Boling are the only two proven veterans of the group.

Hopkins, signed as a college free agent in 2014, is entering his third year after splitting time on the roster and the practice squad in 2016 before appearing in 13 games with 12 starts at right guard last year.

Price, despite his struggles so far in camp, will continue to get the benefit of the doubt over T.J. Johnson at center after being limited this spring while recovering from surgery to repair a torn pectoral muscle.

Even with all the uncertainty on the offensive line, it’s clear the Bengals have been emphasizing improvement there since the offseason, also bringing in new line coach Frank Pollack to replace Paul Alexander. Pollack brings a lot of energy to the practice field, and the players believe the line will improve under his tutelage.

“He wants high effort and that’s gonna bring high results, so it’s definitely something everybody in the room is looking forward to and just working hard, getting better every day,” Glenn said. “Building blocks — we’re adding a block every day and hopefully we’re where we need to be when the season starts.”

Though the results haven’t come yet in practices, the rest of the offense has taken notice of the effort and seen some changes in ways that might not be so obvious.

Perhaps it will show Thursday.

“I think one of the words that's really been flowing around is urgency,” running back Giovani Bernard said. “There's been a lot of urgency within the offensive line to get things moving, and it shows. It shows on film each and every single day. How we watch film now is a little different than how we used to watch film. So it's really fun seeing that change and just that chemistry they're building over there.”