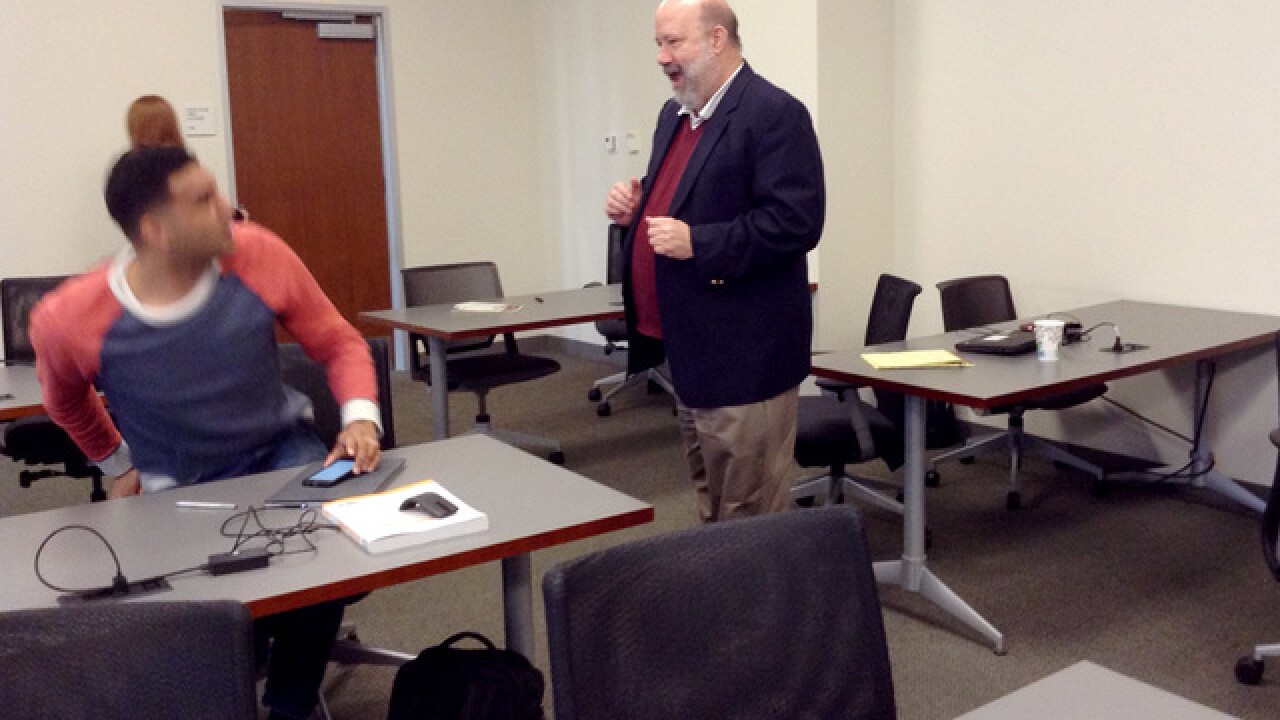 <p>Paul Fiorelli, right, talks April 29 to a student in the Viewing Business Through a Legal Lens class he teaches as part of the Executive MBA program at Xavier University. (Thomas Consolo for WCPO)</p> 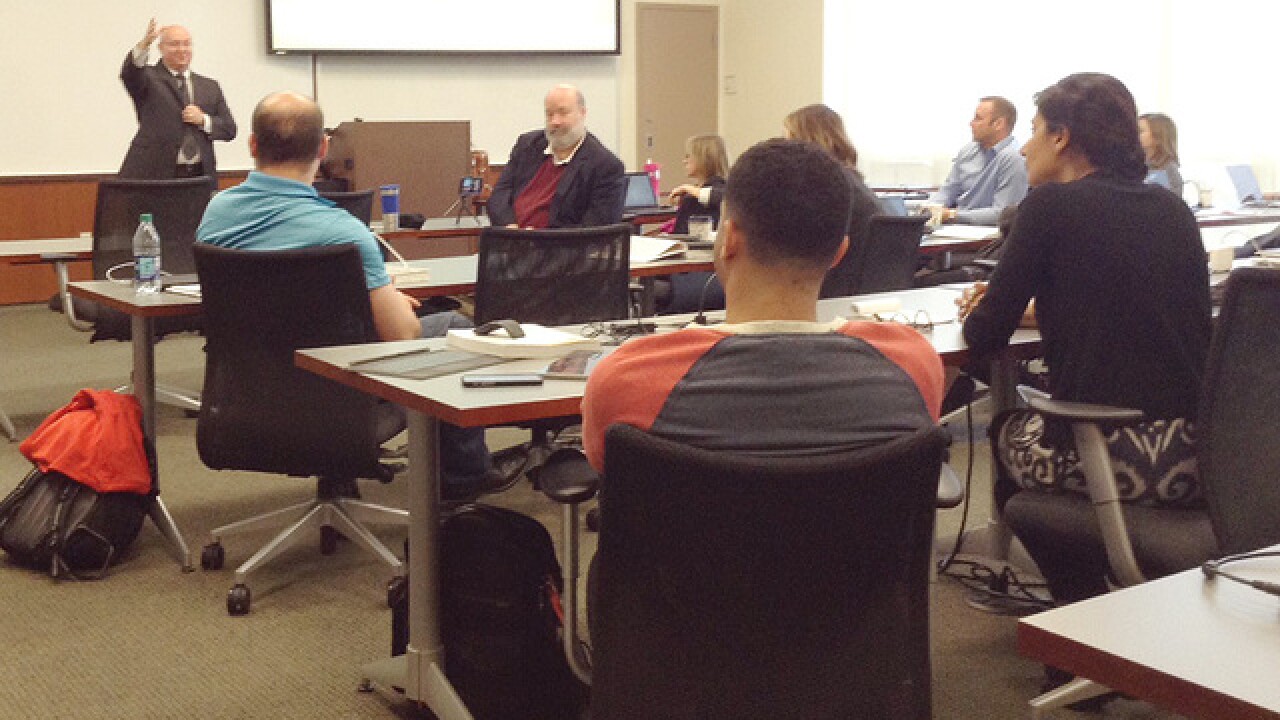 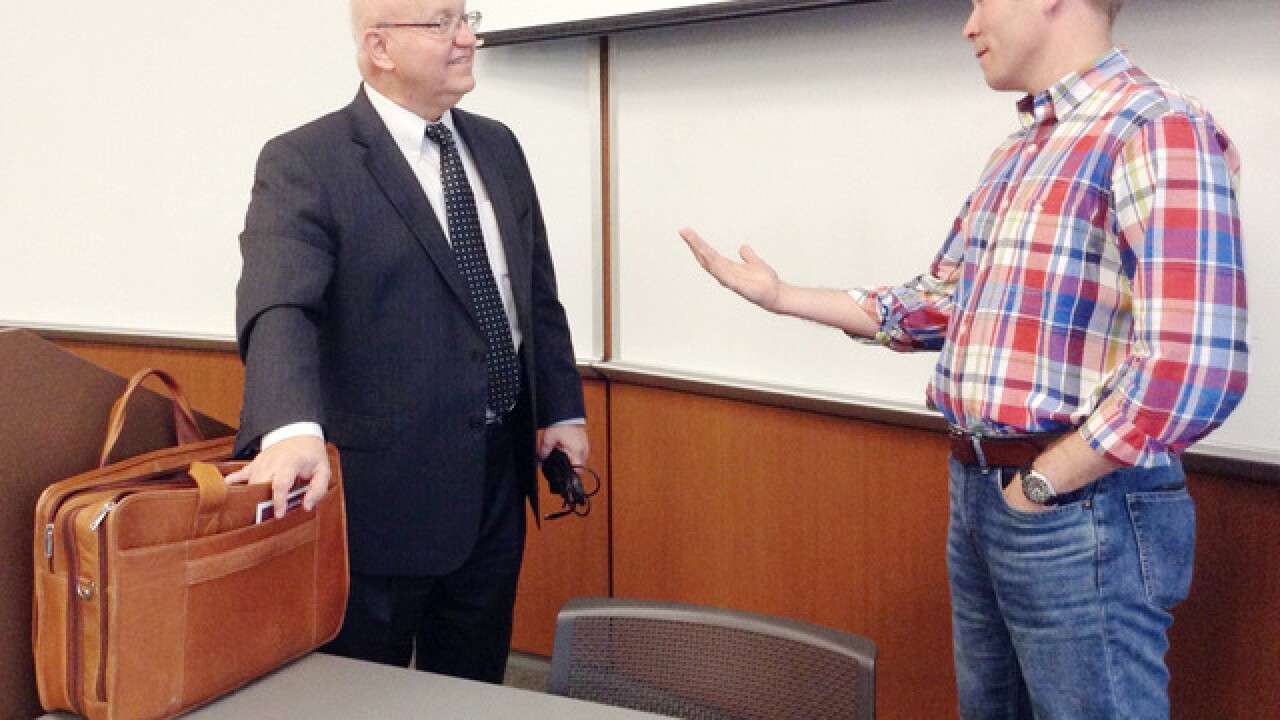 It just isn’t worth it.

Whitacre has become a regular visitor to Xavier, making annual presentations to Paul Fiorelli’s Business Through a Legal Lens class and speaking in April 2014 as part of the Heroes of Ethics series, presented by the Cintas Institute for Business Ethics at the Williams College of Business. What he offers is the warning of his own story, a tale of meteoric rise, catastrophic fall and inner redemption that’s worthy of a Greek play.

At 32, Whitacre had come a long way from his hometown of Morrow, Ohio. He had a doctorate in biochemistry from Cornell and was already a corporate vice president when the agri-business goliath Archer Daniels Midland recruited him in 1989 to head the company’s BioProducts Division. When in 1992 he was given the additional title of corporate vice president, he became the No. 4 executive at a corporation whose $9.3 billion in revenues and $503 million in profits that year ranked it No. 50 on the Fortune 500.

It was that year that he arrived at the ethical and legal crossroads that would shape the rest of his life. After working at ADM for a couple of years, he told the class, he had earned the trust of his fellow senior executives. In April, his boss walked into his office and dropped off a check for $100,000 and stock options worth $800,000. Then the price: He’d be paired with a mentor to teach him how ADM “does business.”

At the time, that meant colluding with its chief competitors to fix prices on lysine, a key amino acid used widely in food production, and citric acid, also used widely in foods but particularly in beverages. “What the company said was, the customer is our enemy, our competitor is our friend,” he said.

Those customers, including companies like Coca-Cola and PepsiCo, were being bilked out of about $1 billion over the scheme's 12 years. Whitacre’s mentoring at fraud continued for about seven months until he let word of the operation slip to his wife.

Ginger Whitacre had known Mark since junior high and, like him, had graduated from Little Miami High School. They had three children. Her response was quick: Either he went to the FBI or she would. He did.

The story of Mark Whitacre’s experiences as an FBI informant and what followed are the subject of three books:

What followed was the longest undercover informant case in U.S. history. For three years, Whitacre wore a wire every work day and checked in with his FBI handlers every week. He traveled around the world to cartel meetings, where territory and clients were divvied and prices set. There were close calls, like when the reel-to-reel tape recorder in his briefcase got tangled and he had to fix it — with his cartel accomplices in the room. Those same colleagues also failed to notice that the same, green table lamp, altered by the FBI to conceal video equipment, was in every hotel room where there was a cartel meeting.

His understanding came years later but is today one of his guiding principles: “Greed blinds you.”

As the months wore on, the stress exacerbated what would eventually be diagnosed as bipolar disorder. A low point came early one morning before a meeting with his FBI contact. At 3 a.m., in a driving rain, he was blowing leaves from the driveway of his 13,000-square-foot home. That was when it sank in that, when the FBI finally closed their snare, he wouldn’t be seen as a hero at ADM; he’d be out of a job.

He decided to create his own golden parachute by embezzling more than $9 million — about three years’ income, he calculated — from the company. “It was a 3 a.m. decision,” he said, and it proved disastrous.

That crime went beyond his immunity deal with the FBI, and so, when the snare did close on ADM, Whitacre’s embezzlement was uncovered. The FBI negotiated a plea deal: serve just six months. He rejected it, burned through all his assets in legal fees and then was sentenced to 10 years.

Facing likely professional and personal ruin, he twice tried to kill himself. It was all part of what he now calls his addiction — to work, to material success, to his own hubris.

“I deserved what I got,” he told the class. “I maybe deserved more.”

Because of Xavier University's Jesuit background, values and ethics are a built-in component of the business school curriculum. A week before Whitacre's presentation, Paul Fiorelli's class traveled to central Kentucky to tour Federal Medical Center Lexington, part of the federal prison system.

"It's one thing to read about the consequences of illegal acts, but seeing it in person is different," said Fiorelli, who is also a lawyer. "When the door in front of you doesn't open until the door behind you is sealed, when they warn you that you'd better keep the yellow stamp on your wrist or you'll have a problem, it makes the experience real."

There’s no parole in federal prisons, but he did get a 15 percent discount for good behavior, reducing his total time served to eight-and-a-half years. Fortunately, “I was able to find myself.”

Without hesitation he gives credit for surviving the experience to his wife and the faith he found in prison. “I was a churchgoer (before), but I didn’t know God,” he said. “I only knew about God.” Among those who helped his religious journey was former Watergate conspirator Chuck Colson.

He considers it a miracle that, instead of losing his family, he found it. “It took going to prison for me to learn what grade my kids were in.”

Among prisoners, he said, “there’s a 99 percent divorce rate if you’re in more than five years.” His wife moved the family three times to stay close as he moved from facility to facility.

Whitacre was released about nine years ago. Today, the Florence, Ky., resident is enthusiastic about second chances. He wouldn’t be where he is without them, he said. Consider:

— The corporate customers he once helped rip off were so grateful to his wife for making him report the cartel to the authorities that they set up a trust to cover her living expenses while he was in prison. (The companies did recover $400 million in damages in court.)

— His Cornell colleagues and mentors kept in contact and acted as his agent, championing him to potential employers. “The day I was released, I had four job offers,” he said. He’s stuck with the one he took and is now chief operating officer and chief science officer of Cypress Systems Inc., a California-based biotechnology company. Whitacre says he’s now part of a corporate culture of serving rather than taking, of purpose rather than greed.

— The FBI agents he feels he let down by embezzling from ADM while acting as an informant have not only forgiven him, they’ve spearheaded efforts to secure him a presidential pardon. In recognition of the mental-health effects of his time undercover, the bureau now limits how long a witness can be asked to act under cover. Whitacre has even spoken at the bureau’s academy at Quantico, Va.

Whitacre doesn’t expect the future business leaders he addressed to face the kind of moral quandary he faced, but he hopes his story will be a cautionary tale for when they reach their ethical crossroads. “The only choice is the right choice,” he told them. “What I gained from illegal activity paled compared to what it cost me and my family.