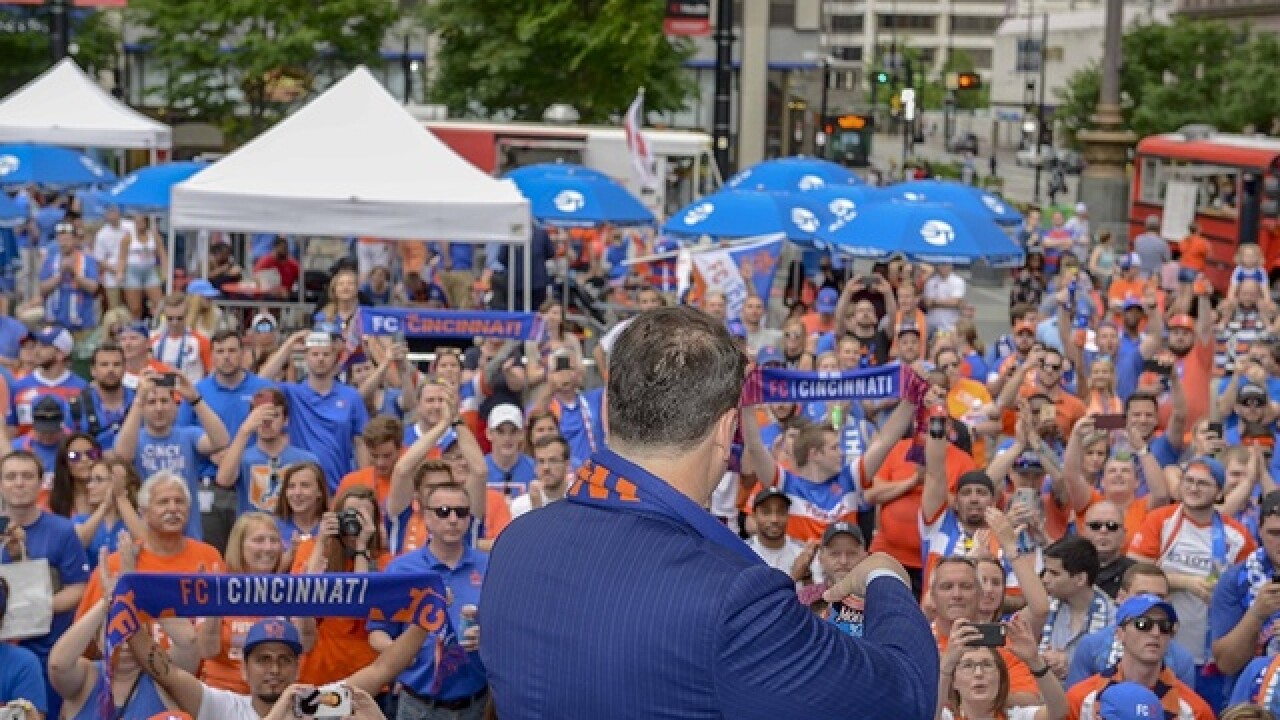 Copyright 2018 Scripps Media, Inc. All rights reserved. This material may not be published, broadcast, rewritten, or redistributed.
Joe Simon
<p>Cincinnati soccer fans celebrate on Fountain Square with the announcement from MLS that FC Cincinnati will become a major league franchise. FC Head Coach Alan Koch greets the fans from the stage at Fountain Square.</p>

FC Cincinnati coach Alan Koch sat down with his players Tuesday morning to discuss the thing no one was supposed to be talking about yet: The worst-kept secret in the city since last week's team release informing media of a major announcement regarding the future of soccer in Cincinnati.

Koch left that meeting feeling like everyone was more at ease. Finally, a cloud of uncertainty was lifted.

Hours later, Major League Soccer made it official that FC Cincinnati would be joining its ranks and beginning play in 2019.

"In many respects it became a lot easier today," Koch said. "I think the cloud that has hovered over our players every day for the last six months now is finally gone. There is no uncertainty. We know this club is in MLS; we know this club is in MLS in 2019. Now, it gives the players a carrot to show what they can do to earn a spot on that roster."

Koch came to FC Cincinnati in December 2016 to be a part of building a club for MLS. He joined the staff as an assistant and scouting director, then was thrust into the head coaching position early in the preseason last year to replace John Harkes. It was a position he was glad to assume, and he received a contract extension last summer.

FCC's rise to national and global notice with its stunning attendance figures and Cinderella run to the 2017 U.S. Open Cup semifinals helped Koch recruit a roster featuring some of the best talent in the USL.

As center back Forrest Lasso said earlier this season, every lower-division player in the U.S. wants to sign with FC Cincinnati for the chance to play in front of the best crowds in the country. Now, they get to enjoy witnessing firsthand the club's rise to MLS while continuing to work to bring a USL trophy to the Queen City.

Going into this weekend's game at New York Red Bulls II, FCC sits in second place in the Eastern Conference, moving down from first place after Saturday's loss to Louisville City.

"Special day in this special city," Lasso wrote Tuesday on Twitter. "But it's also a new week and time to get back to work. Can't be the best if you aren't willing to outwork the rest."

Players were not available to speak to media Tuesday but were in attendance at the announcement and after-party at Fountain Square.

Midfielder Nazmi Albadawi had tweeted out, "Hey @fccincinnati fans anyone want to hang out this afternoon? Should be pretty fun I think."

Captain Dekel Keinan wrote on his Twitter account: "What a great day for the city of Cincinnati, our club and our amazing fans! Proud to be part of it."

Praise for the fans is nothing new from FCC players and coaches, who regularly thank the crowds in interviews and post-game press conferences. Although the promotion to MLS provides the team with opportunities to potentially play and coach at the highest level, FCC kept Tuesday's announcement focused on what it means for the city that supports it.

"This club and this city truly deserve this," Koch said. "We've all witnessed what's been happening in the city, we've all witnessed the fans that are showing up for every single game, and it's truly remarkable, and obviously Major League Soccer made a great decision today."

Broadcaster Tommy Gelehrter, the "Voice of FC Cincinnati," was still digesting the reality of the club's invitation less than three years after the USL announced Cincinnati was joining the then-third division league on Aug. 12, 2015.

It's hard to believe the team will be playing at the MLS level this time next year.

"Honestly it's a little hard to digest it all," Gelehrter said. "So much time and effort has been put into it. I joked with (FCC president and general mananger) Jeff Berding over the last year, 'How do you do sleep? How do you eat? How do you remember everything you have to deal with?'

"It kind of hit me today when I showed up at Rhinegeist this morning and saw the MLS logos all over. It's a testament to this city and this community, the way the fans and supporters have come together and shown their love for the sport and their club and their city. When you put those things together, something really magical happens. Three years removed from having meetings at Jeff Berding's kitchen table because there were no offices at that point, there was no structure, there were three or four employees, and we were getting ready for our USL announcement and now three years later, here we are. It's incredible."