MadTree Brewing's founder on five years in business: 'It's been insane' 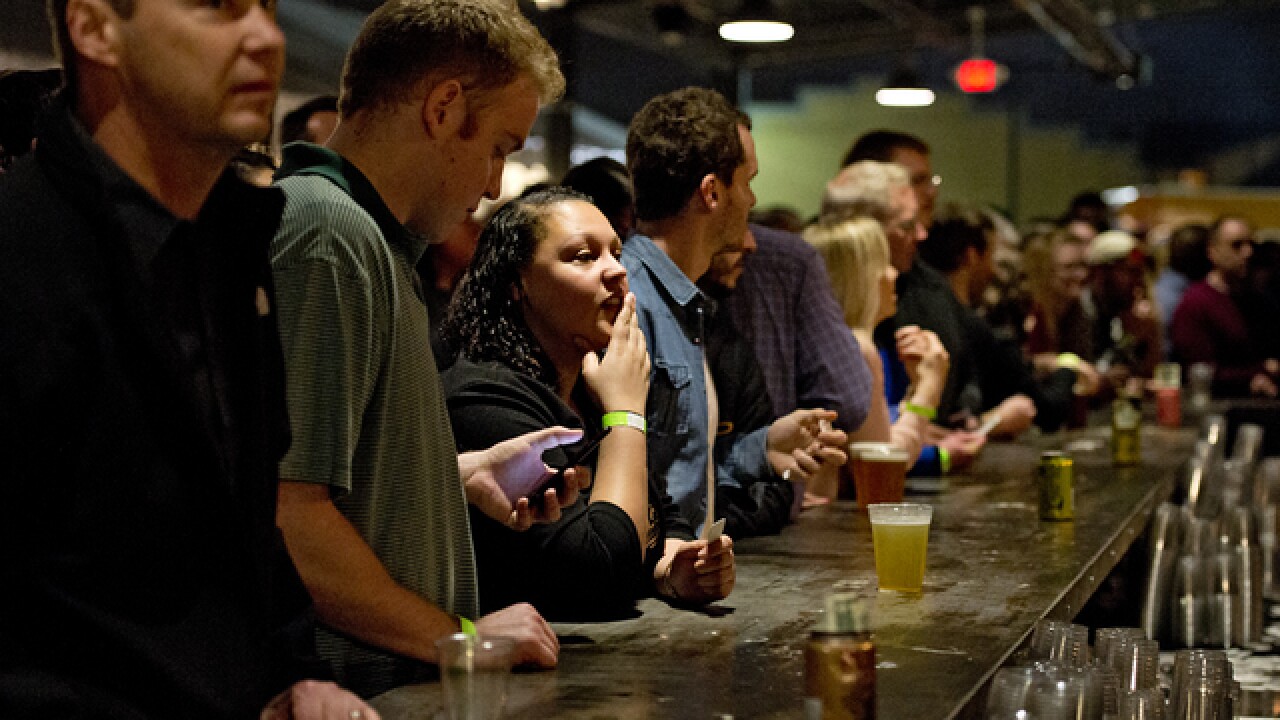 Copyright 2018 Scripps Media, Inc. All rights reserved. This material may not be published, broadcast, rewritten, or redistributed.
David Sorcher
MadTree Brewing officially opened its new "2.0" brewery and taproom in Oakley on Feb. 11, 2017, with a party featuring more than 70 beers, music and bites from local food trucks and restaurants. Customers crowd the bar in the taproom. Photo: David Sorcher

This week MadTree Brewing Co. is celebrating its first year in its Oakley facility at 3301 Madison Road -- and fifth year in business -- with a weeklong celebration.

Festivities include tappings of beers from other local breweries on Monday and Tuesday; Ohio craft beer tappings on Wednesday; tappings of beers from around the country that aren't distributed in Cincinnati on Thursday; a charity fundraising event on Friday; a MadTree night with DJs and specialty MadTree beers on Saturday; and a "hangover day" with brunch and beer specials on Sunday.

MadTree co-founder Brady Duncan spoke with WCPO.com about the celebration, MadTree's growth and what he sees for the future of craft brewing in Cincinnati.

Why did you decide to go with a weeklong celebration instead of the single-day Winter Bonanza?

This year we wanted to spread the love. We love inviting local friends in, breweries across the state and breweries that don't see distribution here. It's kind of cool to offer to Cincinnati beer drinkers, who have pretty sophisticated palates, different beers. So, we just thought we could better accomplish this with a weeklong celebration still culminating on Saturday with bands and DJs and specialty tappings from MadTree, but spread the love during the week and keep it a bit more manageable.

What has the first year been like at MadTree 2.0?

It's been insane. We've not been able to properly predict what this business will do. We expected this space to see an increase in volume and in the different type of stuff we do in the taproom, but we didn't expect to see this type of increase. It's been very cool to see how people are using this space as a community gathering place. And we're kind of right on track in terms of production. We are quickly ramping up in terms of what we are producing here and at the same time, we are very close to installing our pilot system over here, which is great. We want to get our whole team back together in terms of we're all working at one location. It's really important for culture. It's really hard for the guys over there brewing and packaging at MadTree 1.0 (located at 5140 Kennedy Ave., Columbia Township) when you know you have this shiny toy over here at 2.0. The original goal was to add that 15-barrel (pilot) system maybe mid-year, and we saw the need from a cultural standpoint to get everyone together. We're very close to now getting that system in, and we're really excited about that.

When you first opened in January 2013 at the Kennedy Road location, did you imagine MadTree being where it is in terms of size, popularity and distribution today?

We never thought it would be where it is now. Our five-year plan had us doing just 9,000 barrels. The taproom was a little bit of an afterthought in our business plan. I think a lot of breweries are in similar positions as we are in terms of the way the city -- and not just Cincinnati, I mean across the country, but maybe Cincinnati especially -- has embraced local beer. And I think the quality of beer coming out of Cincinnati rivals any city in the country, and we've got some great breweries in the town. People have reacted positively to it. Our retail partners and accounts have reacted positively to it. And I think we are delivering a cool experience for the consumers. We talk about how we are still small. Craft beer is 11 percent of what people are drinking, but we are chipping away every year and we are getting more and more beer drinkers.

What has been the most challenging part of the craft brewery business so far?

We're not at an oversaturation point, I don't think, yet, but it is getting more saturated, more competitive. I think as we've grown one of the hardest things is maintaining that culture. That's a big thing. It's very important to us.

Why did you open MadTree in the first place?

Honestly, we got into this industry for really two reasons. A. We love beer. B. We just wanted to surround ourselves with people who love beer and who were somewhat like-minded and didn't want to work the typical 9-5 every day. And making sure we keep that going strong is critically important to us. You know, running the business is obviously very, very important, but the foundation of making great beer and building our community and creating an awesome culture is the core of what this thing is about. So, the mission has always been the same; it's just a little bit bigger, I guess.

What's been most rewarding?

When we got together this year for our holiday party. We have 95 employees, 95 families that this business is supporting, 95 jobs that we brought into the city. That's pretty special. That means a lot to us. And then looking at the partnerships we have with the toss-a-buck charities and our core charities and the charities we support as we move into other cities.

We first served our beer at Arthur's in Hyde Park. It was a local brewers night, not just a MadTree night. The place was absolutely packed. I think we went through three-and-a-half kegs of "batch one," which was a hoppier version of Happy Amber. And the fun thing was the beer was having issues pouring, so my partner Kenny (McNutt) and I went back down to his house to grab a little home-brew tap. He and I pretty much used that and a cooler to pour beer from the keg into pitchers for two-and-a-half hours so we could continue serving beer that night. Looking back on those days, things have changed, but the foundation is the same.

What's your take on the explosion of craft breweries opening in Cincinnati?

I think there is always room for new breweries who want to do things the right way and have very good plans about why they got into it. I do hate when I see a brewery get into it when it's guys with money who see the success of the industry and want to get into it. And on the flip side, I also hate when I see homebrewers with a real passion want to get into it but haven't thought through the business side. I think the breweries that you will see succeed have the passion for their product, the authenticity behind why they are doing it and they have a solid plan. They also have the business sense on one side. It is important. In order to accomplish the goal of serving great beer to people, you have to understand how you're making money and doing it the right way.

Can you share any plans for MadTree's immediate future?

It's a bit of an exhale. A bit of a quick one. We've been running so fast. For four years it's been not being able to keep up with demand. We are at a point right about now where we can basically keep up on demand. Now we can reflect on, do we have the right structure to keep up with the business? It's simple things like forecasting. We're not in a huge rush to expand; we want to sell more beer. We want to be relevant. We've got some ideas, but we want to make sure everyone is cool with those ideas.