Lumenocity 2016: Here's how the CSO has upped the ante for light show's swan song 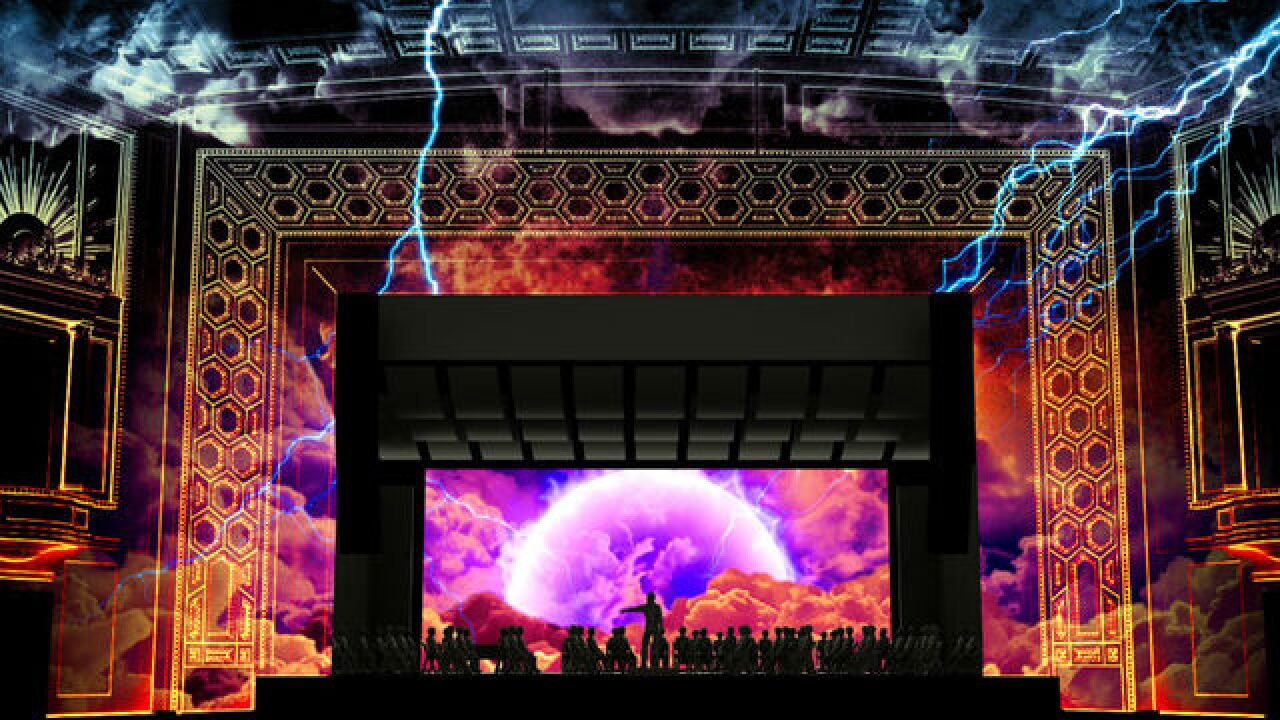 After three years of steadily increasing crowds, praise and artistic triumphs, Lumenocity, the visual and musical spectacular that transformed Music Hall's facade into a psychedelic canvas, is going out with a bang.

Not only is it moving inside the Taft Theatre, but "Lumenocity: Re-Imagine" has been rebranded to mark its makeover, which also will include a huge, interactive free block party for all to enjoy. The number of shows has more than doubled to 10 due to the Taft’s 2,250-capacity for each performance.

What started in 2013 as a modest welcoming event for the Cincinnati Symphony Orchestra's then-new music director, Louis Langrée, rapidly morphed into a summer staple that drew thousands to Washington Park for a high-tech light show. With visuals from creative design and production company Brave Berlin and a soundtrack by Langrée and the CSO, Lumenocity instantly exceeded the wildest expectations of everyone involved.

"We thought we could draw 5,000 people to this event with a projection-mapping element, and we ended up getting 15,000 the first night and 20,000 the second," said Chris Pinelo, the CSO’s vice president of communications, of the success in Lumenocity’s first year.

With 42,000 patrons for the second year's free event and 30,000 paid attendees for last year's four shows and a dress rehearsal, Pinelo said organizers knew they had to raise the bar even higher for 2016's $1.5 million swan song.

"The subtitle this year says it all: It required us to re-imagine the event, and by bringing it inside, we made it a more immersive experience," he said. "It's almost like an Omnimax movie, except it's not a flat screen that curves but a proscenium of this theater, where the first few rows will literally be surrounded by this animation."

Expect A Different Kind of Show

"What we're asking the audience to do is to give up their expectations of what the show is going to be," he said. "It's still about the emotional connection between the visuals and music, but this time, the audience will be up close and personal with the orchestra [and the projections]. Everything is much more compact and intimate."

Using 18 high-powered digital projectors, Bryant's team will beam their designs across every inch of the Taft's interior, with dancing images above, in front and on either side of patrons, for an immersive experience that he likened to a roller coaster ride.

After creating a detailed three-dimensional model of the Taft's interior earlier this year, the Lightborne team set out to re-imagine the Art Deco theater's architecture, creating moments in the show when it feels as if "the whole interior seems to deconstruct and fall apart and turn into something else."

Lightborne’s goal is to bypass the obvious "special effects" factor and create a moment where viewers will have a true emotional connection to the music, such as a section where the Lightborne team dreamed up their utopian vision of what Cincinnati might look like in 2116.

"We want a show that will have the audience leaving and being really proud of the city and their orchestra after having a really unique and hopefully memorable experience," Bryant said.

What’s On the Musical Program?

The musical program will feature six pieces in a collaboration between Langrée and Cincinnati Pops conductor John Morris Russell. The dynamic duo will begin with Russell conducting John Williams' "Planet Krypton" from “Superman,” followed by Williams' 1984 "Olympic Fanfare," which will move into Leonard Bernstein's “Symphonic Dances” from “West Side Story.” The mood will then transition between the lighter Pops fare to Langrée and the CSO, who will kick off with Bernstein's "Candide Overture," before moving into the adagio from Brahms' "Symphony No. 3" and the big finish, the final movement of Shostakovich's "Symphony No. 5."

Organizers have taken the show out onto the street outside the Taft as well: A free block party will unfold Friday through Sunday on Fifth Street between Sycamore and Broadway and in the P&G pavilion.

The centerpiece of the outdoor event will be the massive VR Dome, a free interactive experience sponsored by Lightborne and FotoFocus 2016 that will incorporate Google Tilt Brush technology, allowing patrons to make their own virtual 3-D works of art. Local artists also will be on hand using the technology to make original pieces that will be displayed on an LED screen outside the dome, which is open to visitors age 14 and up.

Another new event is "Instrument 112," an interactive digital installation created by students and faculty from the University of Cincinnati‘s College of Design, Architecture, Art and Planning that will transform P&G Pavilion into a giant musical playground.

With Lumenocity moving indoors and fewer tickets available, Matthew Wizinsky, an assistant professor in DAAP's communications design program, said the CSO wanted more free programming outdoors. After convening a two-day workshop with professors and students in different design disciplines, the DAAP collective came up with the idea of rigging the gardens across the street from the Taft with 3-D tracking cameras and two high-powered projectors that would react to attendees' movements.

"We divided it into two zones, and in one you get immediate audio and video feedback projected down onto your body," said Wizinsky. "We measured out every brick in the plaza and decided to use them in the same way Lightborne is reacting to the design of the theater."

In one zone, visitors will activate visual cues and musical notes by stepping on paving stones, allowing them to "play" the space. In the other, geometric shapes will follow visitors around as they move through the plaza.

The block party also will feature:

Food and drinks: Food trucks and beverage stations will be on site throughout the weekend, with wine and beer, including the signature Glow Lumenocity Pale Ale. A collaboration brew between the CSO and Rhinegeist, Glow is a single hop Hüell Melon Pale Ale with notes of summer melon and strawberry and an ABV of 5.2 percent.

Lantern Parade (presented by ArtsWave): 9 p.m. Aug. 5. Open to families and featuring dancers from Pones Inc. and the Cincy Brass wearing lighted costumes and waving glow sticks to help kick off the weekend. Visitors can make their own glowing lanterns in the Family Fun Zone, which will be open all weekend and feature art projects, face painting, lantern-making, bubble-making and glowing jump-ropes.

The Lumenocity Watch Party: Lumenocity will be projected on a huge LED screen outside the Taft during the performances at 9:40 p.m. Friday, and 3:40 and 9:40 p.m. Saturday and Sunday.

Art of Parts (Sunday only): Local artist Jonathan Gibson will create a piece of crowd-sourced art, assemble it on site and then offer pieces for auction. Bids will be open from 8:30-9:30 p.m., with proceeds supporting the CSO.