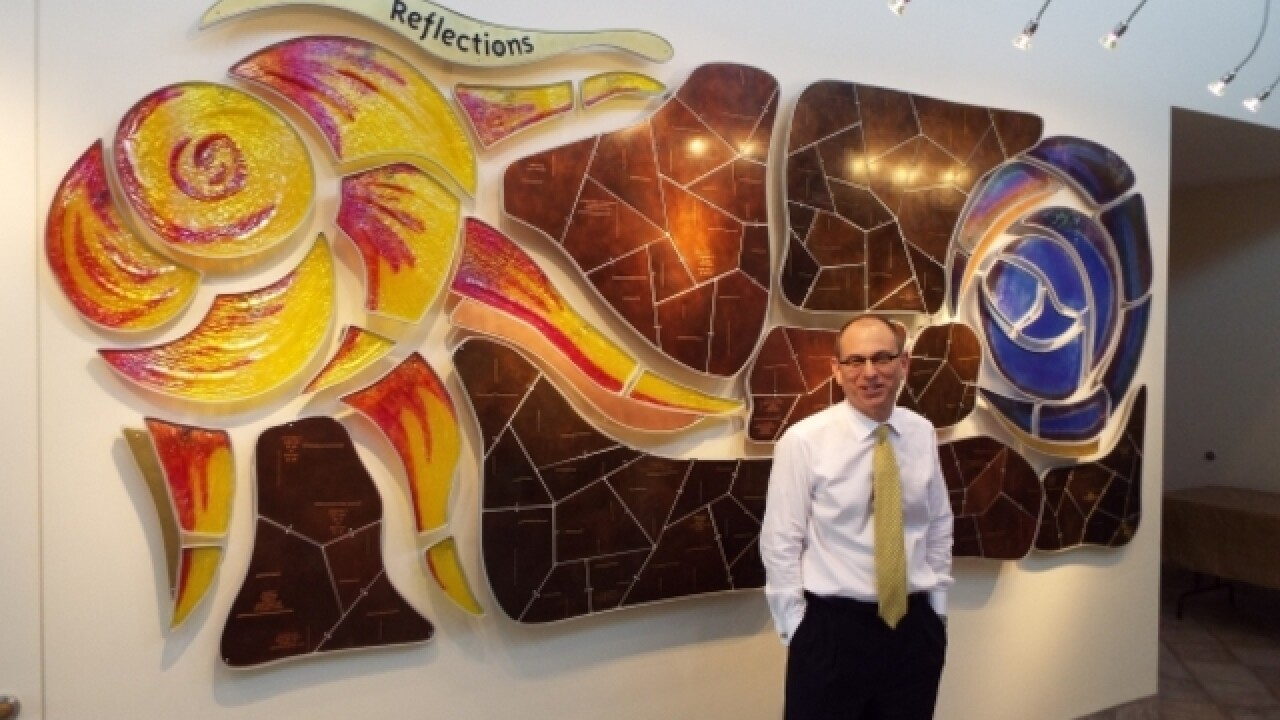 Kevin Eigelbach/WCPO contributor
<p>Rabbi Rob Barr stands in front of a mural that shows the sun and moon and the cycle of days inside Beth Adam synagogue in Loveland.</p>

LOVELAND, Ohio -- Beth Adam, a synagogue in Loveland, is one of the few local houses of worship where the congregation has more reverence for science than tradition.

That much is evident from the layout of the sanctuary, where worshipers face stained-glass windows that depict the Big Bang. To their right, more windows depict the evolution of life on earth, and to their left, windows depict humans’ attempts to understand the creation.

The traditional ark where the Torah is kept is on the wall that faces the congregation, but it’s not in the center of the wall, offset deliberately to show it’s not the center of things. The stand for the light that shines on the ark takes the shape of a DNA molecule, and the light is powered by a solar panel posted in a prominent place near the building entrance.

“This is a place for people who say, ‘I value the scientific endeavor,’” said Rabbi Rob Barr, 60, the only rabbi the congregation has ever had. “The pictures from the Hubble Telescope take your breath away. We are stardust … we are made of the exact same matter that came into existence at the Big Bang … If that’s not enough to send chills down your spine …”

Beth Adam is also one of the few houses of worship where you don’t have to believe in God to be a member. There’s an entire section on its website about the kind of god that’s compatible with the congregation’s humanistic beliefs, the basic criteria being that God doesn’t interfere with our actions or with the laws of nature.

For that reason, you won’t hear people asking God for healing, or wisdom, or anything else during the Friday evening Shabbat service, a staple of worship services at other houses of worship.

“Traditional prayer presumes that nature can change,” Barr said. “We don’t ask the universe to be different than it is … We don’t ask gravity not to be gravity.”

A typical service might include words of remembrance for the dead, a candle lighting and a call to question and explore: “Our ancestors’ words, ideas and beliefs cannot always bring us comfort,” the congregation would read. “For our ancestors never could have imagined the world in which we live.”

Unlike some other houses of worship, Beth Adam has a robust online presence, including 36,000 friends on its Facebook page, and thousands of people all over the world who watch the Shabbat services that Barr videotapes every week at ourJewishcommunity.org. Those typically involve him interviewing another person in the Jewish community or the broader religious community.

A frequent guest is Sharon Dittmar, pastor of First Unitarian Church of Cincinnati and Barr’s friend for more than 15 years.

“I kind of figure that Bob would have been a great older brother for me,” she said. “We’re either laughing or bickering.”

Although they come from different religious traditions, she said, their congregations are both very humanist-oriented and hold very modern interpretations of God and scripture. She called Barr a brilliant thinker whose teaching speaks to those who want a more nuanced interpretation of scripture than they get from orthodox thinkers.

As an example, she cited his videos about Purim, a Jewish holiday that’s based on the Bible’s Book of Esther. In one of them, Barr gives the children’s version of the tale, in which Esther is made queen because she wins a beauty pageant, and she saves all the Jews from genocide. But student rabbi Iah Pillsbury tells what the Bible really says: that the king rounded up all the virgins in the kingdom, that Esther was chosen because she was the best in bed, and that the story ends with the Jews killing thousands of people.

Beth Adam began in 1981, upon Barr’s graduation from Hebrew Union College, with just six people meeting in one-another’s living rooms. For the next 20 years it slowly grew, meeting in rented office space, school buildings and churches, Barr said, until the congregation raised about $2 million and built its own synagogue in 2001.

There are 290 members, he said, and they live as far north as Oxford and as far south as Northern Kentucky. Some attend the bricks-and-mortar Shabat service at 8:15 on Fridays, while others just view the web-streaming service at 6 p.m. Still others listen to Bob’s Banter, a weekly podcast that Barr has done for several years.

It's all about moving from “old Judaism to bold Judaism,” as the congregation’s website says.