Looking for a special piece of old, unusual wood? Marcus Grooms is the go-to guy for that 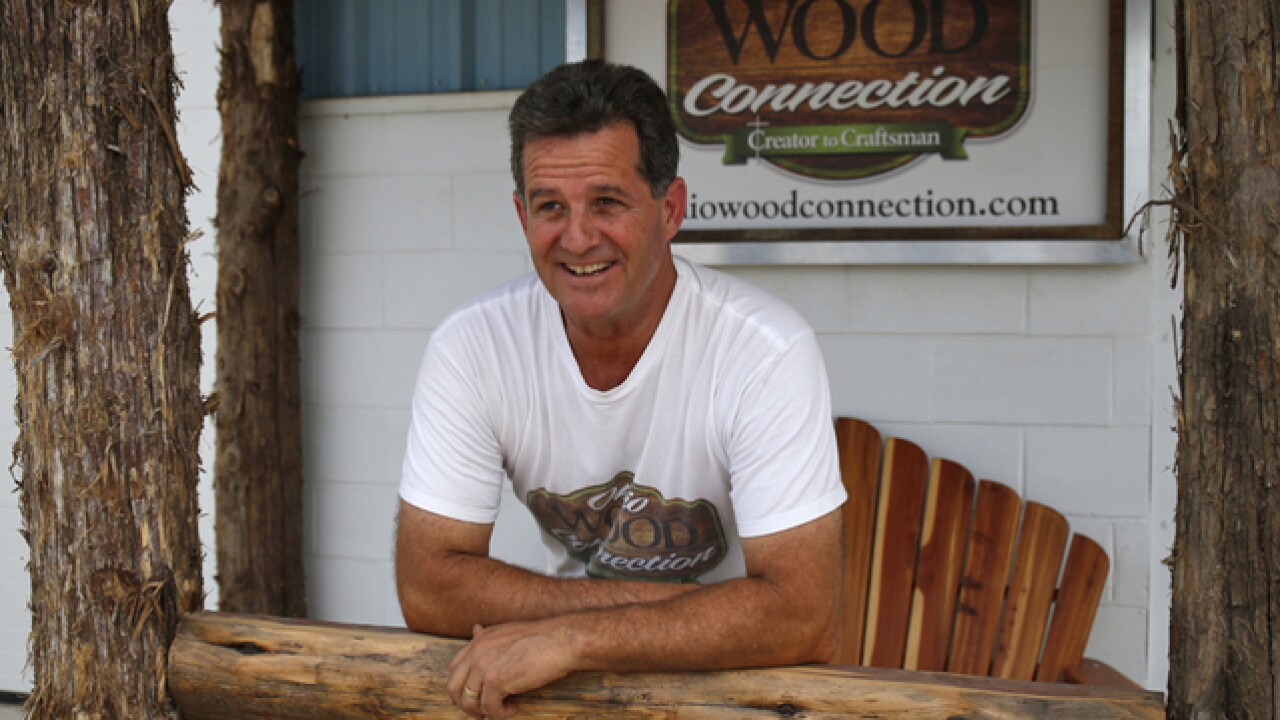 Reclaimed and rough- or live-edge wood is a big trend among American homeowners — you already knew that if you watch HGTV — and Grooms has become, in just over two years, the metro's local go-to guy for old and unusual wood.

His shop, located just off Interstate 75 in Monroe, is stacked with planed and kiln-dried hardwood — red and white oak, cherry, walnut, poplar, pine, hackberry, ash, red cedar, maple, hickory, elm, locust, and more — that is destined to be turned into mantelpieces, flooring, interior wall and ceiling paneling, coffee and conference tables, and even wedding registry tablets that become displayable keepsakes.

The former financial-services professional takes in trees and stumps from developers, cities, private forests, tree services and homeowners. He collects old barn doors for resale, and he disassembles and harvests wood from structures built in the 1800s, such as a 4,800-square-foot dairy barn in Mason, whose rough-hewn beams and chestnut siding Ohio Wood Connection is salvaging while a developer prepares to replace it with a new home.

Business is booming, and Grooms is looking to expand his three-man operation to meet the demand and stay ahead of competition from lumberyards in Southwestern Ohio and Northern Kentucky.

“The demand?” Grooms said. “I get two to three calls a day about reclaiming.

“We are fortunate in Ohio to have such a bounty of structures that have to come down,” he said.

There’s work to be done in Kentucky, as well, including taking down tobacco barns on farms being converted to new uses.

As land use shifts, homes get in the way, too. And when their owners realize the effort and money it takes to tear down an old timber home, tag its parts and reassemble it elsewhere, they sometimes throw in the towel. Those homes become another lumber source for Ohio Wood Connection.

Having easy access to thousands of board feet of uniquely grained wood has been great for Heather Curless, a former architect who has been supplying sustainable and energy-saving products to homeowners and builders through her Greener Stock store in Columbia Tusculum for more than six years.

“If you want the more unusual stuff, (Grooms) is probably the guy to go for it,” said Curless, who recently took some of her customers on a field trip to Ohio Wood Connection because “people really need to go see his place in order to make their selections.”

“I think it keeps getting bigger and bigger,” Curless said of the reclaimed and live-edge wood trend. “People had an interest in it but couldn’t get their hands on it. Now they have a resource, and it’s just going to grow.”

She said she has gone to Grooms for wooden mantels with 4-inch live edges, rough and square cut shelving, table and bar tops and barn wood for interior walls.

“It’s amazing,” she said of how Grooms turns out uniquely grained woods. “When it’s raw, you don’t always see the beauty of the grain until it’s fully sanded and sealed. And the color changes, too.

Grooms grew up in a Navy family that landed in Ohio when he was a teenager. He attended Sycamore High School for two years before moving to Columbus for the last two years of school. He served the next six years with the Seabees, the Navy’s construction battalion, which taught him about tools, machinery and wood.

Back in Columbus, Grooms worked as a shopping mall construction superintendent for two years before launching a long career in financial services. When his wife died several years ago, he stepped back and re-evaluated his future. He quit working long hours and increased the time he spent working with wood.

“I kept getting asked for reclaimed wood," Grooms said. "People would ask if I’d take down a barn, that sort of thing.”

Soon he found himself investing his time and money — more or less his life — into a small business that became Ohio Wood Connection.

Grooms’ business outlook is bright. He is anticipating the arrival of a $75,000, super high-efficiency kiln from Japan that he said will be the first of its kind in the United States. He said it will shorten the 56-84 days it takes his current kiln to dry wood to just 10 days and reduce board loss due to warping and cracking from 20 percent to less than 1 percent. And he said he has contracted with a national demolition company to transport salvage to him instead of paying the higher cost of taking it to a landfill.

By the middle of July, Grooms expects that his crew of full-time carpenter and forklift operator/mechanic Jason Albright and summer intern Jordan Smith will have salvaged what they can from the Mason barn. Because what they take is their payment, the crew is intent on saving anything and everything. That means that an apparent pile of trash will be picked over a second or third time.

Grooms said it was thrilling to discover that beneath the old cow barn’s metal and vinyl siding were original shingles made of chestnut, a tree that was devastated by blight in the first half of the 20th century and has rarely been used in construction since.

He has many favorite woods. One is known as tiger, curly or ambrosia maple. When Grooms runs it through his saw, a random pattern of smear marks created by the saliva of beetles that once infested it appears. The marks radiate from tiny black holes where the beetles made their home.

Among the most popular pieces Grooms stocks in his warehouse are hand-hewn floor joists and beams.

“People want these things for mantels, and they sell just as quick as we can get them in here," he said. "They just love having that character at the edge.”

He said his inventory of 15 barn doors won’t last long either.

“As soon as people know that we’ve got them, they sell.”

Virtually nothing is wasted at Ohio Wood Connection. Still a woodworker, Grooms takes “cut offs,” the small pieces lost in the board shaping process, and crafts them into small utilitarian pieces such as butcher clocks, cheese boards and holders for single wine bottles, cell phones and iPads.

Gnarly stumps become one-off coffee table bases. Insect-damaged logs lend themselves to creative projects, such as mirror frames. Grooms created a towering honey locust log that had been hollowed out over the years by red ants, leaving irregular openings that inspired a unique floor lamp.

Boards are everywhere in the warehouse. A triple-stump of a black walnut tree that grew to 95 feet will yield 4,000 square feet of boards. Two large stacks of honey pine floorboards and interior walls from the Mason barn are awaiting pickup, already having been designated for a new home in the area.

Salvaged logs and stumps that line one exterior wall of the warehouse will be cut into boards and stacked between stickers outside to air dry for 6-8 months before moving into the kiln. Grooms anticipates some will reveal surprises, but others he knows will be unique.

One 200-year-old oak stump is several feet wide and had been preserved in clay soil for about 75 years. Some of the clay had seeped into the buried log’s grain, giving it a band of gray several inches deep that will give special character to the boards Grooms gets out of it.

“It’s like a candy shop,” Grooms said while examining his collection. “You don’t know what you’ll find inside these logs until you slice them open and see the grains.”

Not every salvaged piece of wood will be cut open. A 17,000-pound black walnut stump Grooms took in about a year ago had such striking roots and curly grain that Grooms decided it would make a great base for a glass table top.

Ohio Wood Connection will have put 200 hours of labor — picking, chiseling, wire brushing and sanding by hand — into transforming the muddied, 8½-feet-long by 7½-feet-wide stump, which will lose 13,000 pounds, mostly in moisture.

“It will become a conference table or put in an atrium or be for somebody with a big house who needs to fill some space,” Grooms said.