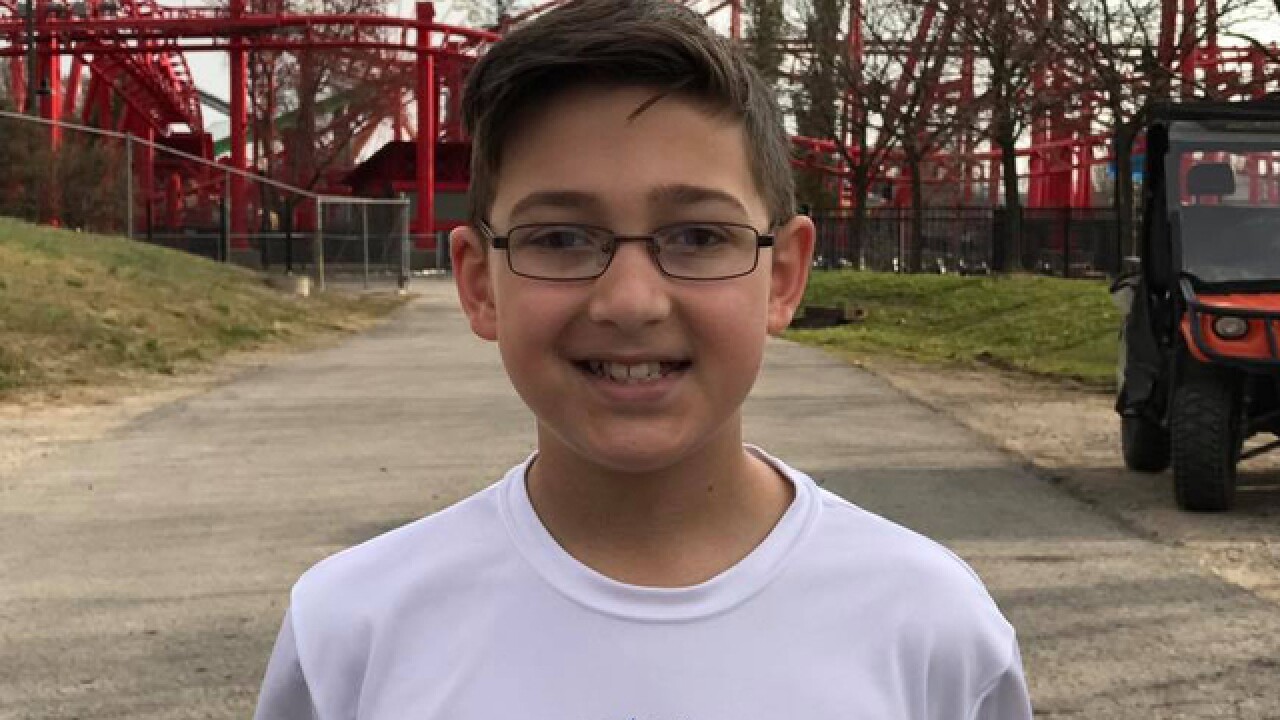 Copyright 2017 Scripps Media, Inc. All rights reserved. This material may not be published, broadcast, rewritten, or redistributed.
Contributed
<p>Logan Joiner is using his passion for roller coasters to overcome symptoms of autism spectrum disorder and to help others.</p>

CINCINNATI -- Riding roller coasters is more than a summer pastime for Logan Joiner. It's an opportunity to overcome challenges and help others.

Joiner first took an interest in roller coasters about three years ago. Since then, he's gone from an enthusiast enjoying his passion vicariously through a computer screen to an 11-year-old roller coaster reviewer with a YouTube following.

Overcoming his fear of roller coasters was the first hurdle. Logan has autism spectrum disorder and has difficulty with loud sounds and surprises -- two things that seem to go hand-in-hand with roller coasters. However, roller coasters follow the same route and pace every time. That repetition appealed to Logan.

"I'm not a big fan of unexpected surprises," he said. "But if you think about it, roller coasters aren't really like that … so they're not scary because they're predictable."

Individuals with autism often develop a strong interest in one particular thing, said Steven Crites, an associate professor of teacher education at Northern Kentucky University. Trains are one such interest he's often heard about.

"Roller coasters are sort of train-like," Crites said. "They run on tracks, they're repetitive, they make noise. All of those things are attractive to somebody with autism."

The ability to memorize facts related to an interest is another common characteristic of individuals with autism spectrum disorders. From speed to height and length, roller coasters have plenty of associated statistics for Logan to learn.

These statistics helped give Logan the idea to combine his love of roller coasters with his interest in video. Soon after gaining the confidence to ride roller coasters, he began co-hosting YouTube videos reviewing the rides with his sister, Natalie. They named their channel Koaster Kids.

He eventually developed enough comfort in front of the camera to host the videos solo.

Logan wasn't the only person benefiting from the experience. YouTube followers began sharing feedback about how his videos inspired them to face their fears of roller coasters. Logan in turn created the Be Brave Challenge, encouraging more people to face their fears.

"Of all the lessons he's learning, the lesson that doing this in a way that helps other people is the most beneficial part of it," said Logan's dad, Jeff Joiner.

"Basically, if you're doing something you love and you're helping people, you're basically winning life," Logan said.

"What I'm hoping is that this grows into something he can do for a living one day," Jeff Joiner said.

With each challenge he's conquered, Logan has willingly faced new ones.

"He's been continually pushed out of his comfort zone," Jeff Joiner said.

He and his wife, Kathy Joiner, initially noticed improvements in Logan's anxiety and sensitivity to loud noises when he first started riding roller coasters. His videos helped him with confidence and articulating his ideas.

Logan has now ridden 219 roller coasters and made numerous videos reviewing them. He knows that he prefers tall, fast and smooth roller coasters, and he's quick to say that his favorite ride is Fury 325, at Carowinds in North Carolina.

He still faces challenges, though. One of the most recent is interacting with fans. It's not unusual for another youth to recognize him at theme parks. He doesn't always know what to say when strangers approach him, but he recognizes that he has a responsibility to be friendly.

"They came out of the way to meet me," he said.

The fact that Logan's passion is something that appeals to many typically developing peers could be a good thing when it comes to further developing his social skills, too.

"As long as those interactions are positive … they're likely to improve and go on and develop new skills," Crites said.

The same could apply to other individuals with autism spectrum disorders as well.

"If you do have an interest that might be enjoyed by other people, that really can be a great bridge to social interactions," said Jennifer Green, a clinical psychology professor at Miami University.

As long as they see Logan growing and using his passion to help others, his parents are happy to continue encouraging it.

"This isn't just about him, it's about helping other people," Jeff Joiner said. "He's very down to earth, he's very thankful, and he considers himself very blessed to have the opportunity to do this."