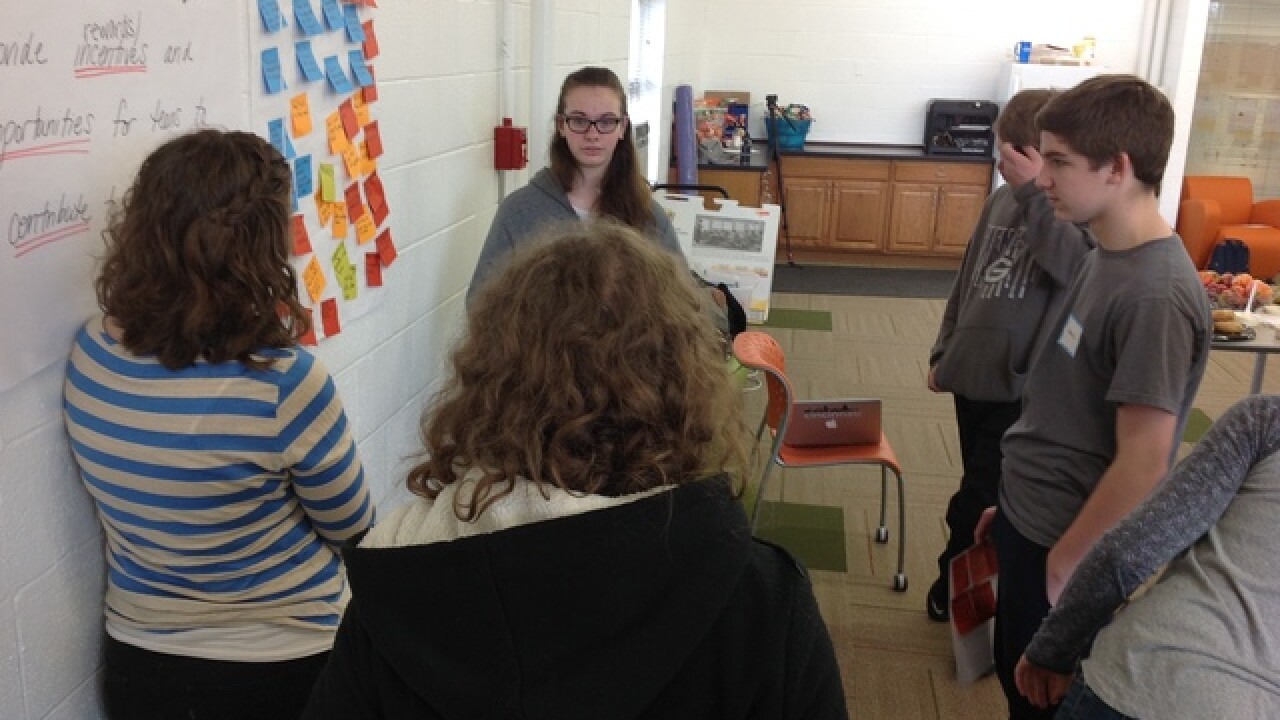 Lucy May | WCPO
<p>Students at Glen Este Middle School took part in a problem-solving session March 11 to figure out how to get more teens to participate in summer feeding programs so they don't go hungry when school is out. Here they are discussing which ideas they liked best.</p> 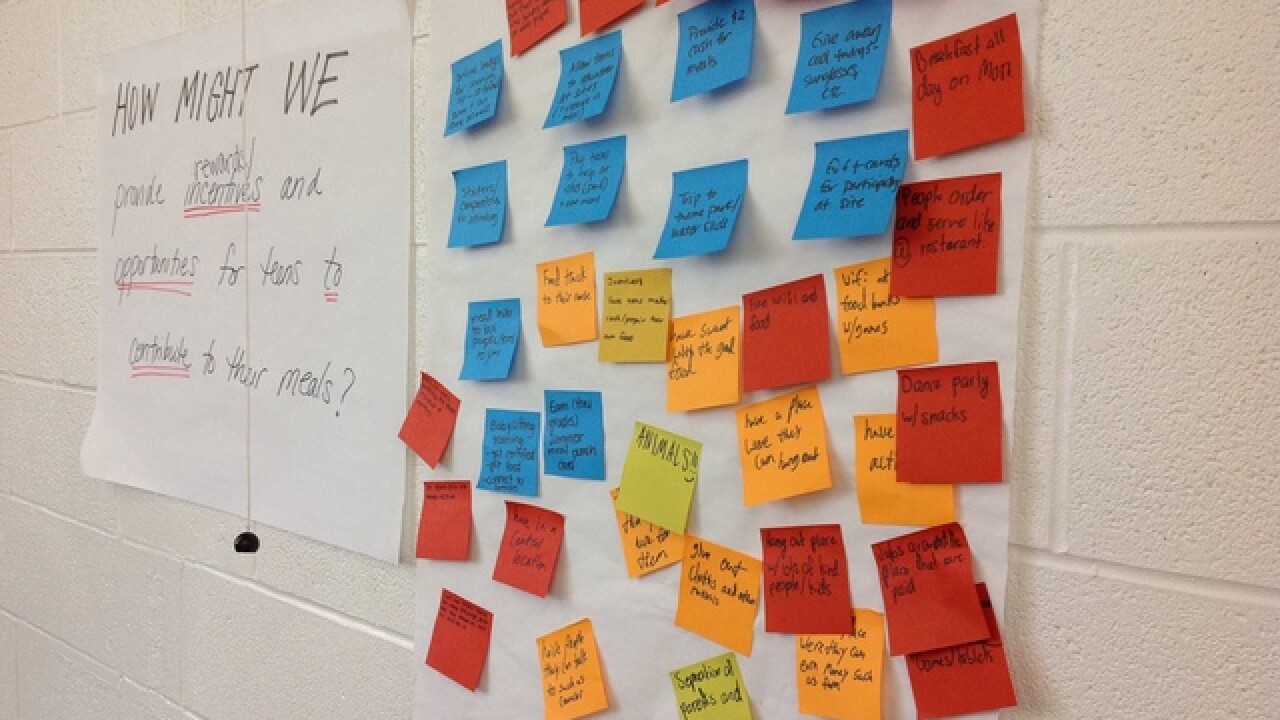 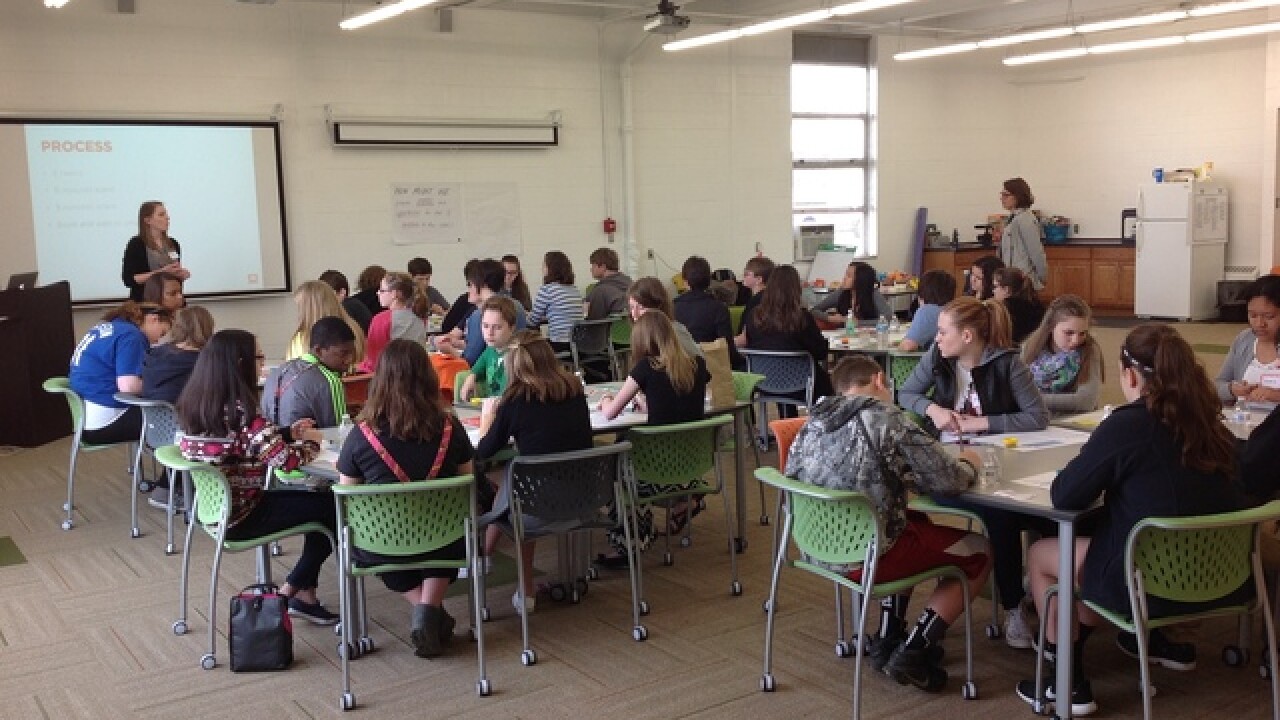 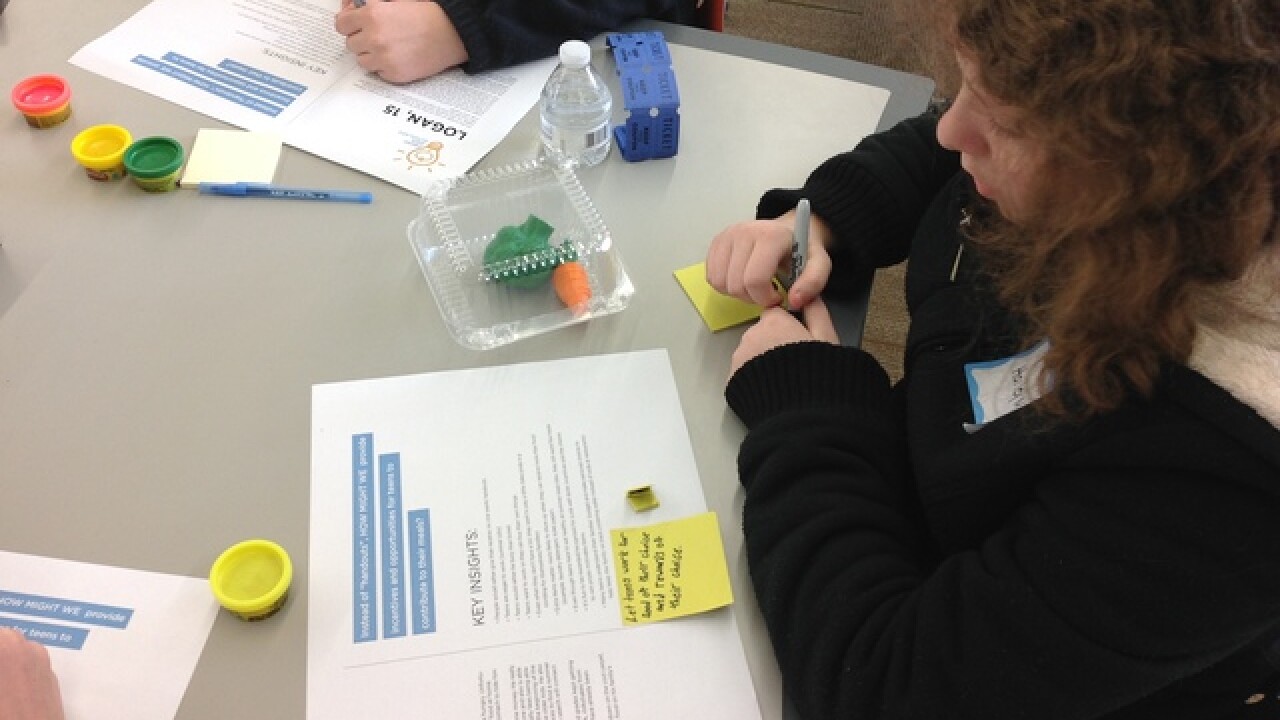 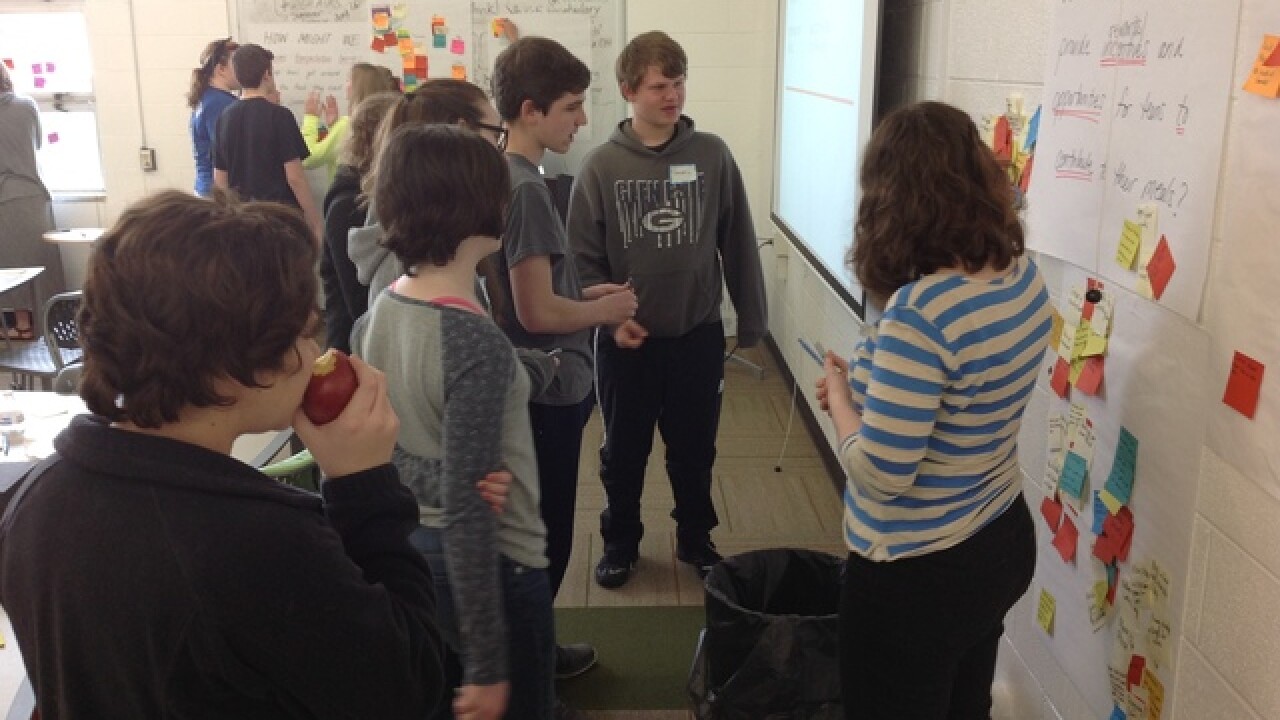 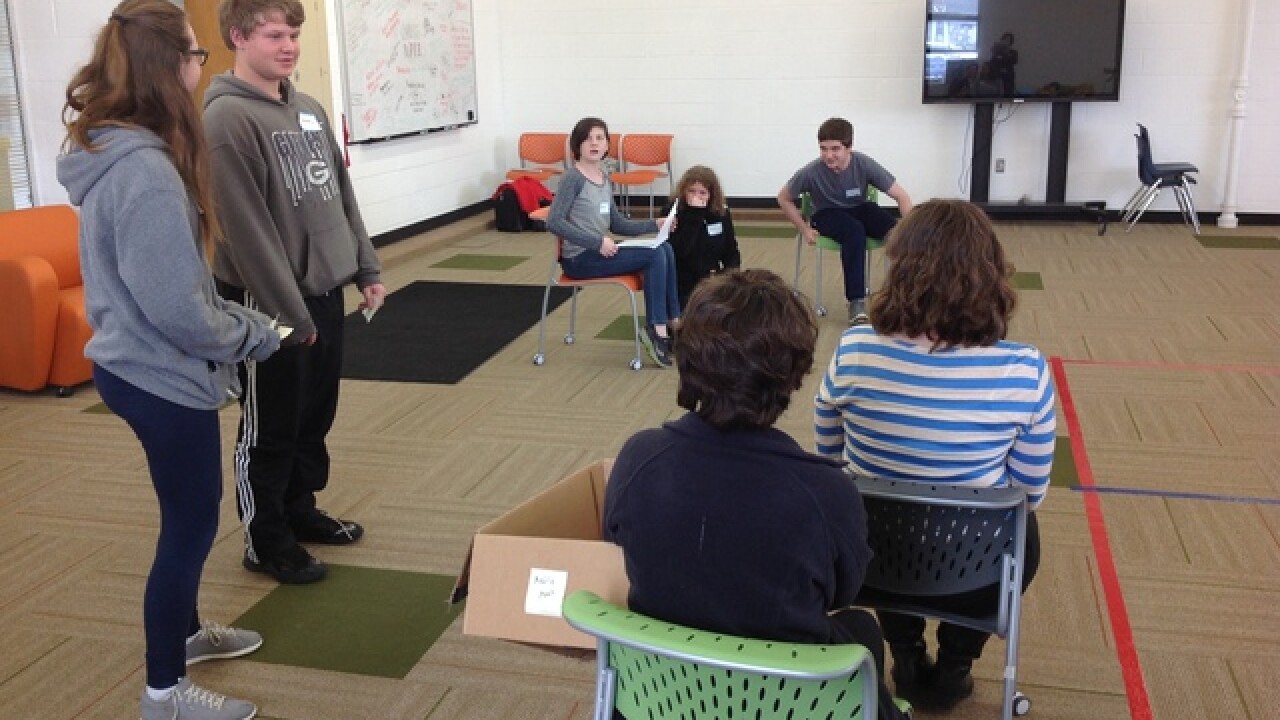 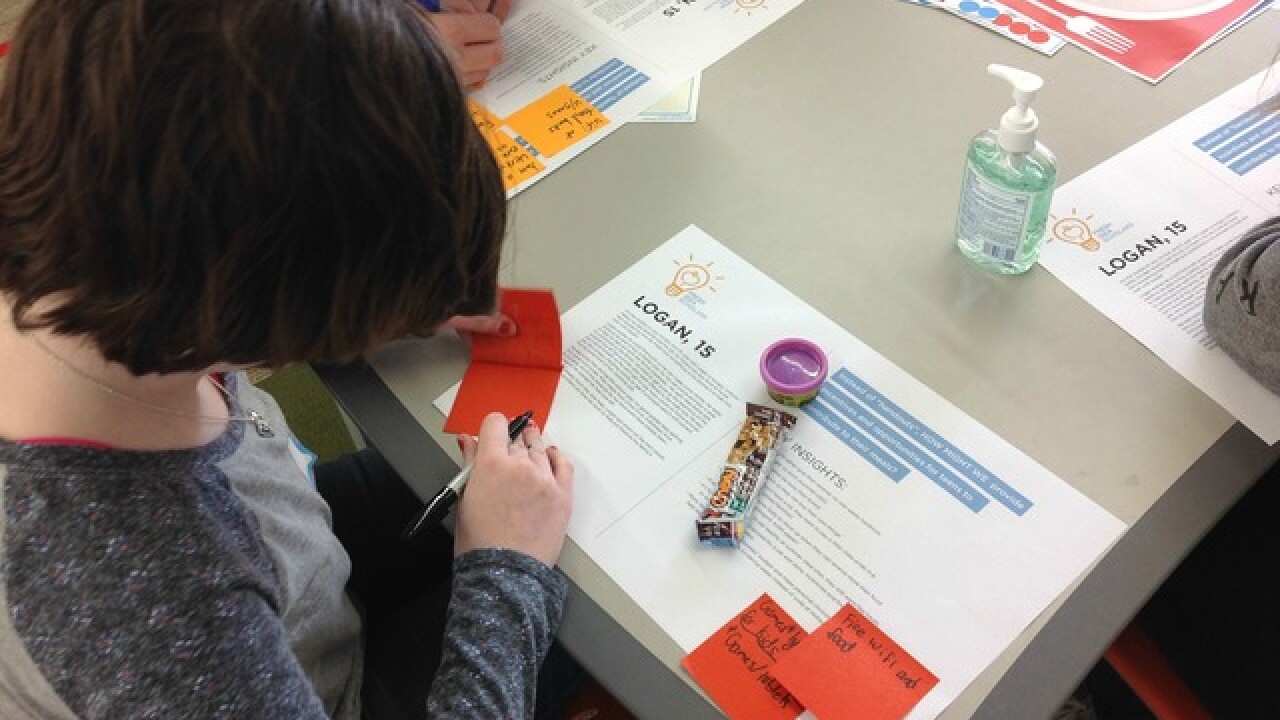 UNION TOWNSHIP — For thousands of students across Greater Cincinnati — and millions more around the country — hunger is the price they pay for summer break.

In Hamilton County alone, 63,000 students don't get the food they need each summer. And educators and people working to reduce hunger know from experience that a lot of the students who go without are teenagers.

So the adults working to solve the problem sought help from the people who know teens best: Other teenagers.

The point was to get ideas from students that adults might not think of, said Wendy Bolger, director of program innovation strategy at No Kid Hungry, a Washington, D.C.-area nonprofit.

"There's stuff they come up with that we never would have thought of," Bolger said.

One West High student, for example, said kids would go to summer feeding programs if they were rewarded with "likes" on YouTube, Instagram or other social media accounts.

"He didn't want money, but the currency that teenagers are interested in is their social media profile," Bolger said. "A million likes — that would get him what he wants."

Another student suggested a "lock in," where teens could hang out together in a safe place, enjoy meals with their friends and be forced to put away their cell phones and interact in person.

At Glen Este Middle School, 34 students spent the morning of March 11 working in groups to develop their own ideas for how to make summer feeding programs more attractive for kids their age.

"It's a lot of fun because you get to meet a whole bunch of people who are great and obviously make new friends and then you actually get to use your smarts and be creative during school," said Julie Casavant, an 11-year-old sixth-grader.

Julie was part of a group of students who were challenged with this problem:

How might we provide rewards/incentives and opportunities for teens to contribute to their meals?

"A lot of teens don't want to accept handouts," said Rachel French, a 13-year-old seventh-grader who was part of the same group. "So we thought it would be easier for them to work for what they want."

Other student groups addressed questions such as:

• How might we overcome transportation barriers to help teens get around and get the food they need in the summertime?

• How might we design eating experiences that teens love and expose them to new kinds of food?

• How might we get teens the food they need in ways that are specifically designed around their unique teen lifestyles?

"The part that's most exciting and powerful for us is empowering the people who are affected by the problem with the ability to solve it," said Kate Hanisian, executive director of Design Impact.

"We have a lot of adults trying to work on it. But the whole point is, how do you empower the voice of teens?"

They came from every grade in the school — sixth through eighth — and were a mix of some students who qualified for free or reduced-price lunch and others who didn't. There were boys and girls and students of different races and ethnic backgrounds.

"We had teachers nominate students who think outside the box and are creative problem-solvers," Crowe said. "From the moment that I talked to the students about this, they were all in with both feet."

The morning represented a commitment for the kids. Sure, they got out of class for half the school day, got to eat Chick-Fil-A wraps for lunch and apples and granola bar snacks whenever they wanted. But they also had classwork to make up later.

"I just kind of wanted to go because I would get out of class, but now I kind of like it," said Chase Courtney, a 14-year-old eighth-grader. "I like the problem-solving, I guess."

'This is a Solvable Problem'

The approach that No Kid Hungry and Design Impact used was an example of "design thinking." The students started out writing every idea they could think of on Post-It notes, no matter how crazy or outlandish it seemed.

After several rounds of generating more ideas, discussing and refining them, each group came up with their two favorite ideas.

One was supposed to be for "congregate feeding," which is what the federal government requires now. That's where children who need the meals must all go to a specific place, and adults in charge must watch them eat the food they receive, Hanisian said.

The teams also were asked to develop "non-congregate" ideas, where teens would not have to be all in the same place at the same time to get the food.

After discussing each of their top two ideas, the teens picked which they liked the most and then created skits that were supposed to describe the ideas in summer movie trailer style.

The no-handouts group picked its non-congregate idea, which the students decided to name Mobile Meals.

Jacob Lawson, a 14-year-old eighth-grader, came up with the idea.

"I think it would help if they would use food trucks going to the people's houses instead of people having to go to other places," he said. "And bring like a month's supply."

The food would be delivered to families in need as a reward for how hard the kids had worked during the school year.

Other student groups suggested a food truck idea for deliveries as their non-congregate idea, too. But most of the others picked a congregate idea as their favorite. They suggested places where teens could go to be together, play basketball, dance or learn to cook.

It could take a year or more to launch any of the ideas that students developed at West High, Owen County High and Glen Este Middle.

The adults involved will test some of them in small ways instead of trying to get a $100,000 grant for a project that they aren't sure will work, Hanisian said.

But here locally, some of the proposals could be tried as early as this summer, said Lauren Flowers, the senior manager of programs at Freestore Foodbank.

"It all depends on funding," Flowers said. "It would be great to be able to see something in practice."

However long it takes, though, the idea is to find better ways to get kids the food they need each summer when school is out.

"Our organization's view is this is a solvable problem," Bolger said. "This is certainly something we can fix in this country if we have the will."

And if the adults in charge are willing to listen to the young voices of the people they're trying to help.