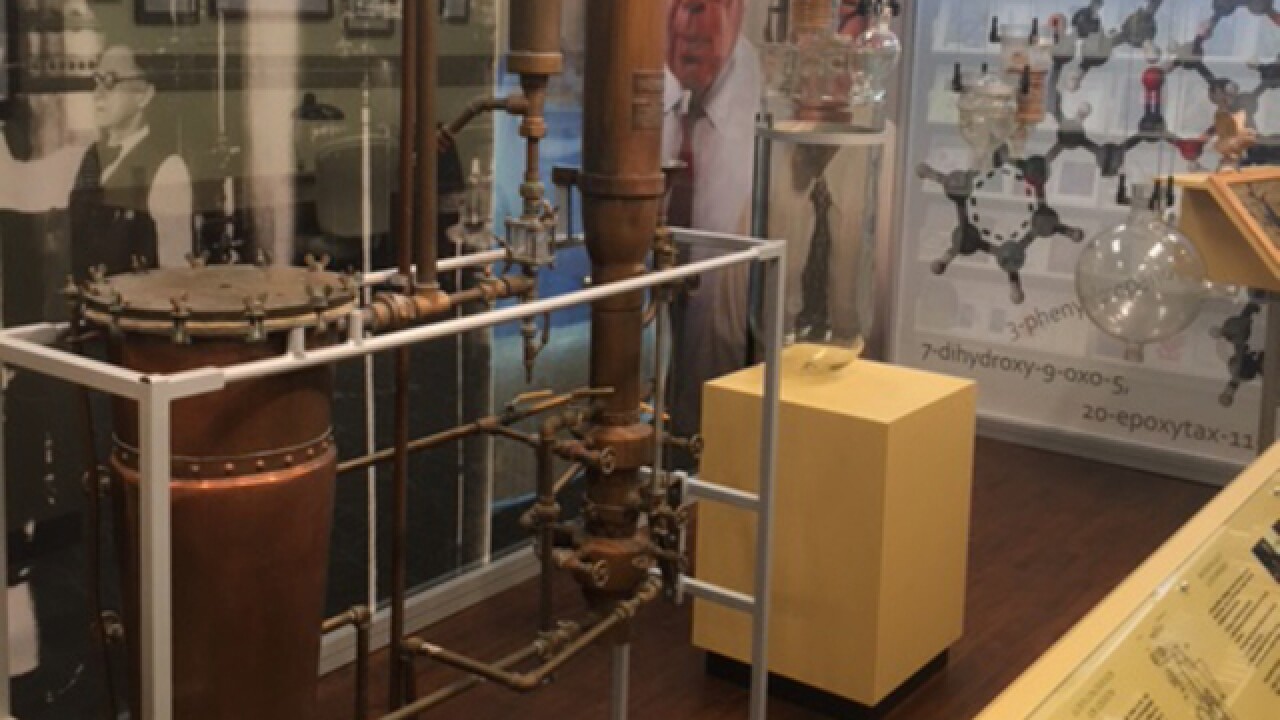 Copyright 2018 Scripps Media, Inc. All rights reserved. This material may not be published, broadcast, rewritten, or redistributed.
Contributed
The Lloyd Library is at the corner of Court and Plum streets in Cincinnati.

CINCINNATI -- Looking at the Lloyd Library, there aren't many clues as to what might be inside. It's a nondescript brick building on the corner of Plum and Court streets, not far from City Hall. Although the exterior might be plain, the inside is filled with artifacts from a peculiar chapter in Cincinnati history.

In the library's lobby, you might think you've walked into a steampunk convention. A brass contraption known as "Lloyd's Concentrator for Solutions" stands beside suspended several large glass spheres. Pinned butterflies fly frozen next to a stuffed alligator, forever wrestling a stuffed snake. Little lockets festooned with beetles hang for sale in the gift shop.

So who is Lloyd and why is his library so strange?

Cincinnati is home to some of pharmacology's greatest accomplishments. Benadryl got its start in this city, as well as the polio vaccine.

Cincinnati is also home to another interesting, if somewhat controversial, kind of medicine -- pharmacognocy, or plant-based medicine. John Uri Lloyd, along with his brothers Nelson Ashley Lloyd and Curtis Gates Lloyd, started the Lloyd Brothers Pharmacy in Cincinnati in 1885.

"They were on the edges," Patricia Van Skaik, executive director of the Lloyd Library, said. "They were never traditional medicine."

The Lloyd brothers were obsessed with botanical medicine and traveled all over the world in search of medicinal-plant life. Although the brothers were quite worldly, Cincinnati was a perfect place to ply their trade with the Ohio River serving as a convenient way to distribute their medicine.

"They traveled the world but they were very connected to Cincinnati," Van Skaik said. "Nelson Ashley Lloyd was actually a founding member and owner of the Cincinnati Reds."

The pharmacy was famous for its herbal remedies, especially their "Specific Medicines" or plant tinctures. John Lloyd's patented Concentrator for Solutions was a cold still, meant to create those tinctures in a way that prevented plant materials from coming into contact with heat.

"One of the things the Lloyd brothers did was look to home remedies," Van Skaik said. "They looked at Native Americans, Chinese and even Appalachian cures or remedies for something. You see all of those things highlighted in their work."

At the height of the Lloyd brothers' success, medicine wasn't the science we would recognize today.

"The medical field was more crowded than it is today," Alex Herrlein, one of the librarians at Lloyd, said.

Looking through an old medical directory, an ailing Cincinnatian could find doctors specializing in not just conventional medicine but also homeopathy or eclectic medicine.

"Traditional medicine said you poisoned sickness out of your body, so you would use lead or mercury or leeching," Van Skaik said. "The eclectic medical movement said no, we want to look to plants and things that will strengthen the body."

In 1908, the Lloyd brothers constructed a separate building to house the books they used to research their medicine. Across the street was the Eclectic Medicine Institute (EMI), an eclectic medical college. The EMI had a close relationship with the Lloyd brothers, their pharmacy and their library. In fact, John Lloyd was a member of the faculty at the EMI.

"It was the largest, most significant and long-lasting eclectic medical college in the United States," Herrlein said. "The library here would have been a resource for the EMI."

Although the pharmacy was sold in the late 1930s, the Lloyd brothers' legacy lives on at the Lloyd Library.

"We have scientists and researchers come in not just to see our historical collection but to use our current collections -- it's one of the few places you can find it all accumulated in one place," Van Skaik said.

"It's hard to put an easy label on us," Herrlein said. "We're one of a kind. We're definitely the biggest one of our kind."

The library houses many rare books in its collection and also continues to add new books to their stacks. Everyone from artists to gardeners to university professors come to visit the library's resources and curiosities.

"True to our mission of focusing on medicinal plant use, we collect on a variety of topics," Herrlein said. "It is not simply limited to Western traditions, but things like Ayurvedic medicine, Chinese medicine, traditional and indigenous medicinal perspectives from around the world."

The Lloyd Library also continues its namesakes' legacy through one- to three-month fellowships. One of the fellows this year is recent University of Cincinnati graduate Alyncia Mason. Mason is making a comparison between plant specimens from the Samoan Islands collected by Curtis Gates Lloyd as well as recently collected specimens.

"I find medical botany really interesting," Mason said. "I found the people of Samoa moved away from the medicinal uses to more of a ritual use."

Mason has plans to become a physician's assistant and said her study of herbal medicine will enhance her medical practice.

"I just really wanted to expand my knowledge of eastern medicine because I'll learn about western medicine when I go to school," Mason said.

Mason is smart to incorporate alternative medicines in her practice since those traditional medicinal perspectives continue to be sought after in Cincinnati.

Dr. Peter Sheng has been practicing Chinese herbal medicine in conjunction with traditional Western medicine for almost 30 years. Traditional Chinese medicine often addresses problems with a person's qi, or energy. If qi becomes stagnant in the body, certain herbs may stimulate or correct the flow of energy.

"I think there's always great interest," Sheng said. "A lot of [conventional] treatments have marginal value but cost a lot."

Sheng said that the therapies he offers have been around for thousands of years.

"We did not start on lab animals -- we started with human bodies," Sheng said. "If you know what you're doing, it's safe."

Sheng said he hoped Cincinnatians would continue to explore other options.

"People need to keep an open mind. Unfortunately most doctors are not on board although I'm getting more referrals from my colleagues," he said.

Dr. Maria Hoeffer also believes that more people are starting to seek out herbal remedies. Hoeffer is a naturopathic doctor based in Pleasant Ridge who has been practicing since 2008.

"When they see results in another person, they can jump on board," Hoeffer said.

Hoeffer said that one of the biggest differences in naturopathic medicine is the holistic approach she takes with her clients.

"One approach doesn't fit everyone," Hoeffer said. "Some people are well served by conventional medicine and some people feel like it doesn't meet their needs."

However, Hoeffer believes there's room for Western medicine to work alongside an alternative approach.

"It's not an either/or, it's a both/and. It's really about what is going to meet that individual person's need," Hoeffer said.