Lechon, a Filipino version of spit-roasted suckling pig, is catching on quickly in Porkopolis

Crispy on outside; tender fall-off-the-bone meat 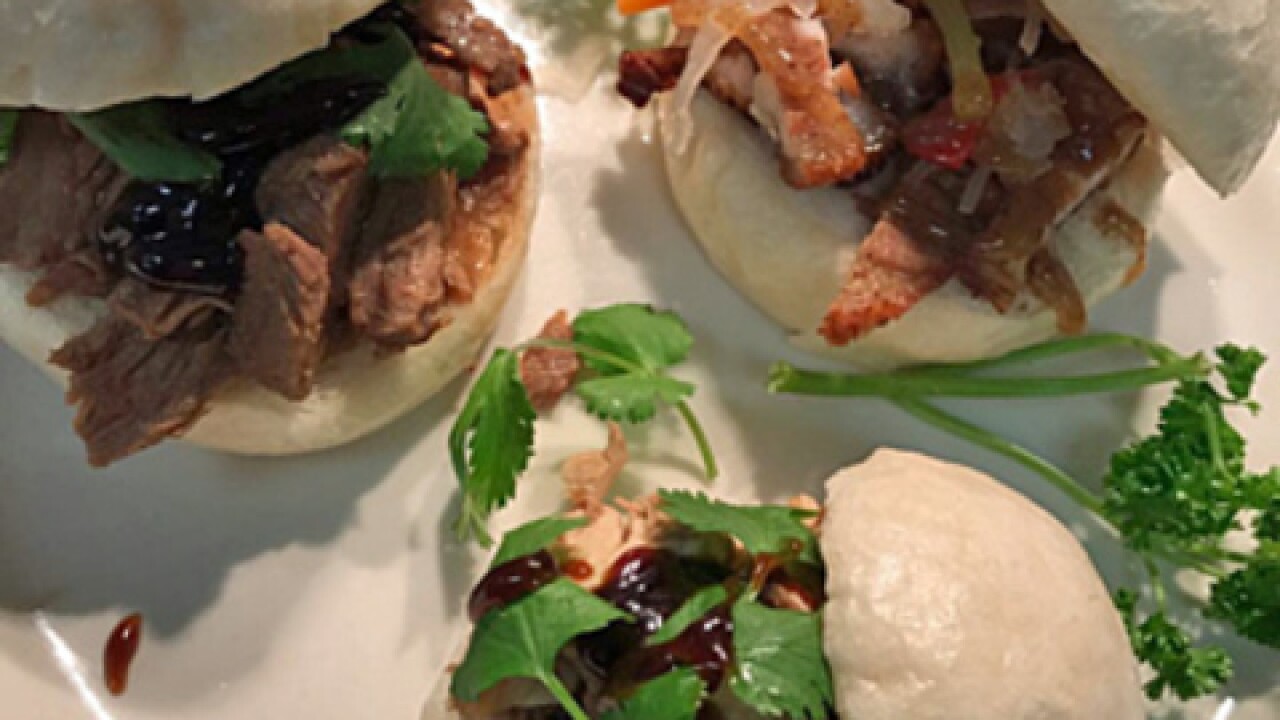 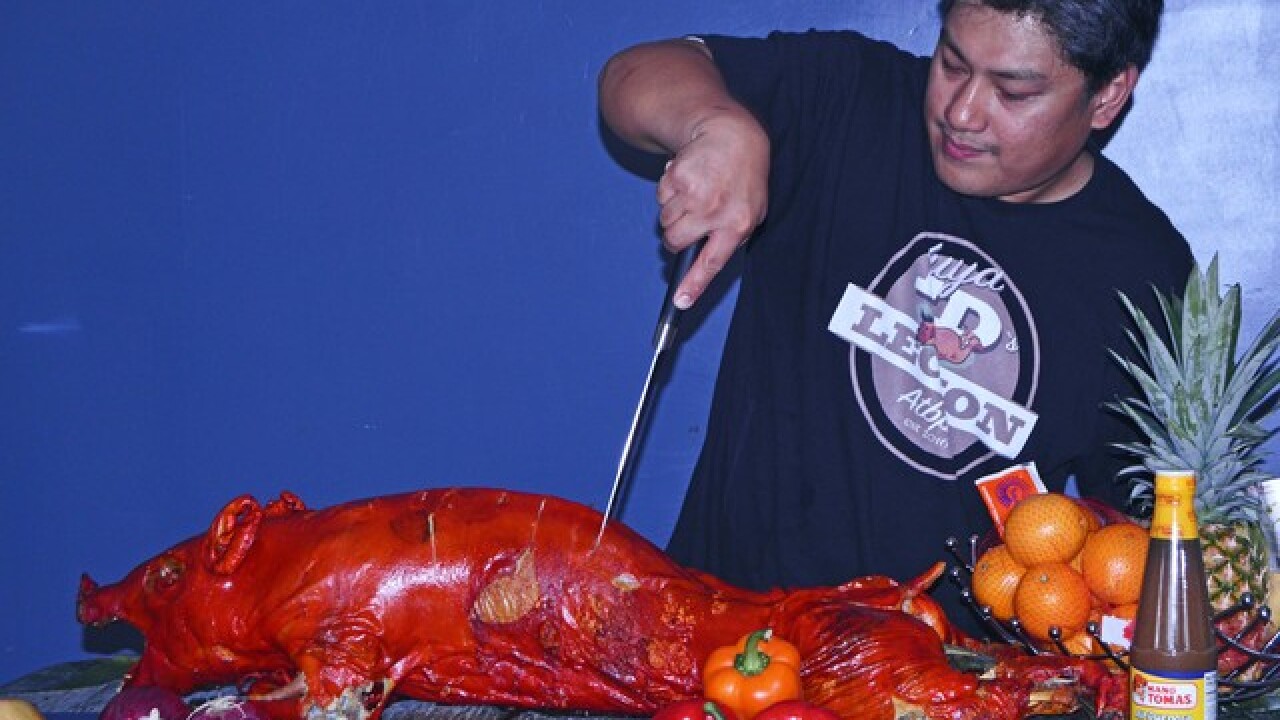 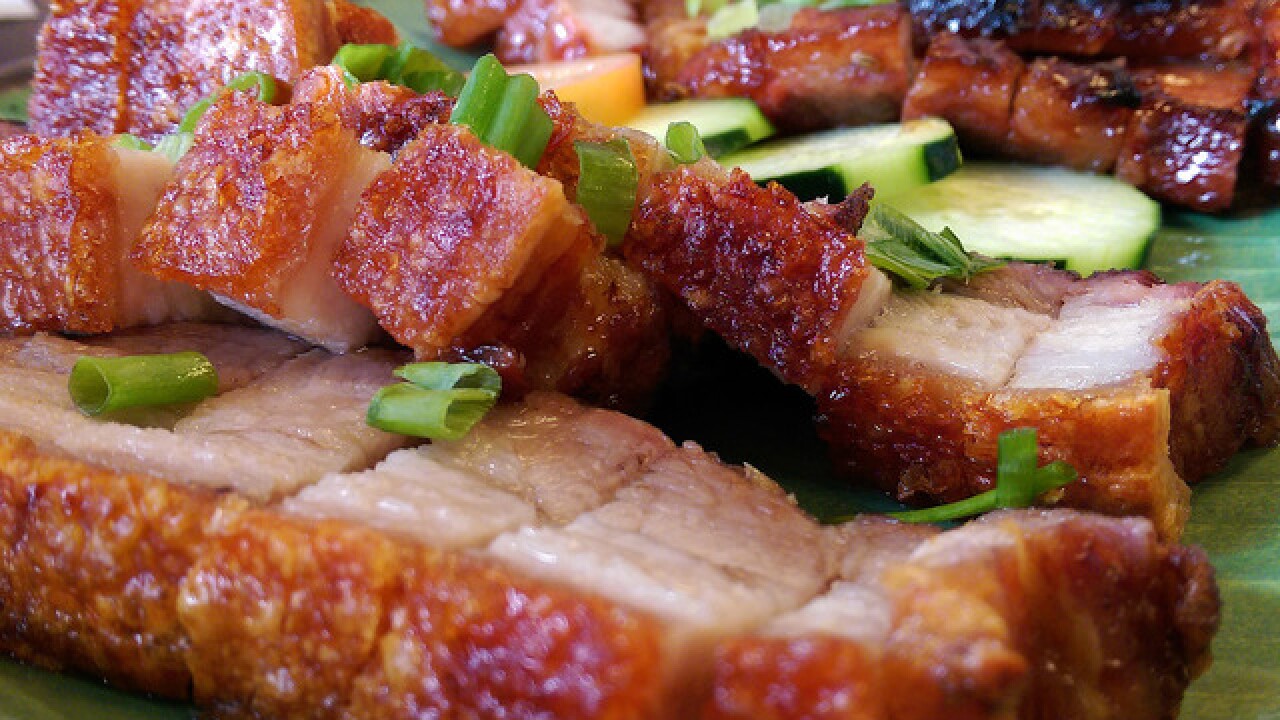 Lechon, the national pork dish of the Philippines, is poised to pick up a serious fan base in pork-loving Cincinnati.

This roast pork wonder, crispy on the outside with tender fall-off-the-bone meat, is not yet widely available in local restaurants, but it has gained traction at food festivals such as the Asian Food Fest and Taste of Cincinnati and at Findlay Market, where Kuya Ed's Lechon Atbpa sets up shop on select weekends.

Eduardo Deza, one of the owners of Kuya Ed's, said he sold out in four hours during a recent Findlay Market gig. Perhaps the time has come to make room at the table for this centerpiece.

"It's a whole pig cooked for hours over charcoal," said Mapi De Veyra, executive chef and general manager at Quan Hapa in Over-the-Rhine.

De Veyra was born and raised in Tacloban City in the Philippines, and prior to joining Quan Hapa, he roasted his share of lechon for his pop-up Filipino restaurant Mapi's Barbecuehan.

In the Philippines, lechon is synonymous with celebrations and festivals, said Deza, who is from the province of Iloilo, in the central Philippines.

Lechon is the perfect food for a crowd -- there's a lot to go around. Besides, there's something communal about breaking down an entire pig in a large gathering.

However, roasting a whole pig is time-consuming and can be cost-prohibitive. Enter lechon kawali. Lechon kawali is an abbreviated version of lechon, using only the belly. The pork belly is first braised and then deep-fried, traditionally in a wok. Incidentally, "kawali" means "wok" in Tagalog, the Filipino language.

"Lechon is the whole spread," De Veyra said. "Lechon kawali is more of a restaurant food. It's a solo dish, and you get your own plate."

What makes a good lechon?

Hands down, it's the crispy skin. The quality of the lechon, and the cook's worth, for that matter, ride on this crusty fact.

The secret to crispy skin lies squarely in the technique.

"It's all in the roasting," De Veyra said, adding that cooks in the Philippines even learn to listen to the sizzle of the skin as an indicator of heat. "The heat has to be even and not too hot."

Lechon that's cooked over excessively high heat can transform into something entirely different, he said.

"You don't want the skin to turn into chicaron," he said. Chicaron is crispy, bubbled-up pork skin that's eaten as a snack.

The seasonings for lechon are relatively simple: salt, pepper and sometimes a little chili pepper.

"We also use lemongrass and green onion," Deza added, which locks in its decidedly Asian flavor.

What goes with lechon?

In a word, rice. Plain, steamed white rice is a staple in the Philippines and, not surprisingly, accompanies lechon in generous amounts. Pancit (noodles) also makes for a tasty accomplice.

"Pickled papaya is to lechon what pickled ginger is to sushi," De Veyra explained.

In more elaborate spreads, it's not uncommon to also serve greens and even kinilaw (Filipino seviche), he said. Another typical condiment is liver sauce -- a gravy made of pork liver and other ingredients like vinegar, sugar, onion and garlic. Mang Tomas bottled sauce is a convenient and popular substitute for made-from-scratch liver sauce.

If you can't stomach the thought of liver anything, a simple sprinkle of vinegar on your lechon would work just as well.

Chefs continue to innovate with lechon, coming up with items like lechon "pillow puffs." These lechon sliders, built on bao (a steamed bun), are available at Dai Trang Bistro in West Chester.

De Veyra hopes to bring a wider selection of Filipino barbecue meats, including lechon, to Quan Hapa. There's no doubt in his mind that there's a growing market for this specialty.

"I was getting calls as far away as Columbus for it," he said.

Deza said Kuya Ed's plans not only to return to Findlay Market next year, they intend to be there every weekend.

While Cincinnati may not yet have fully experienced the rise of Filipino cuisine as in bigger cities like Los Angeles, lechon may well pave the way.

What could be more natural than digging into lechon in a city nicknamed Porkopolis?

You can find lechon at these places: