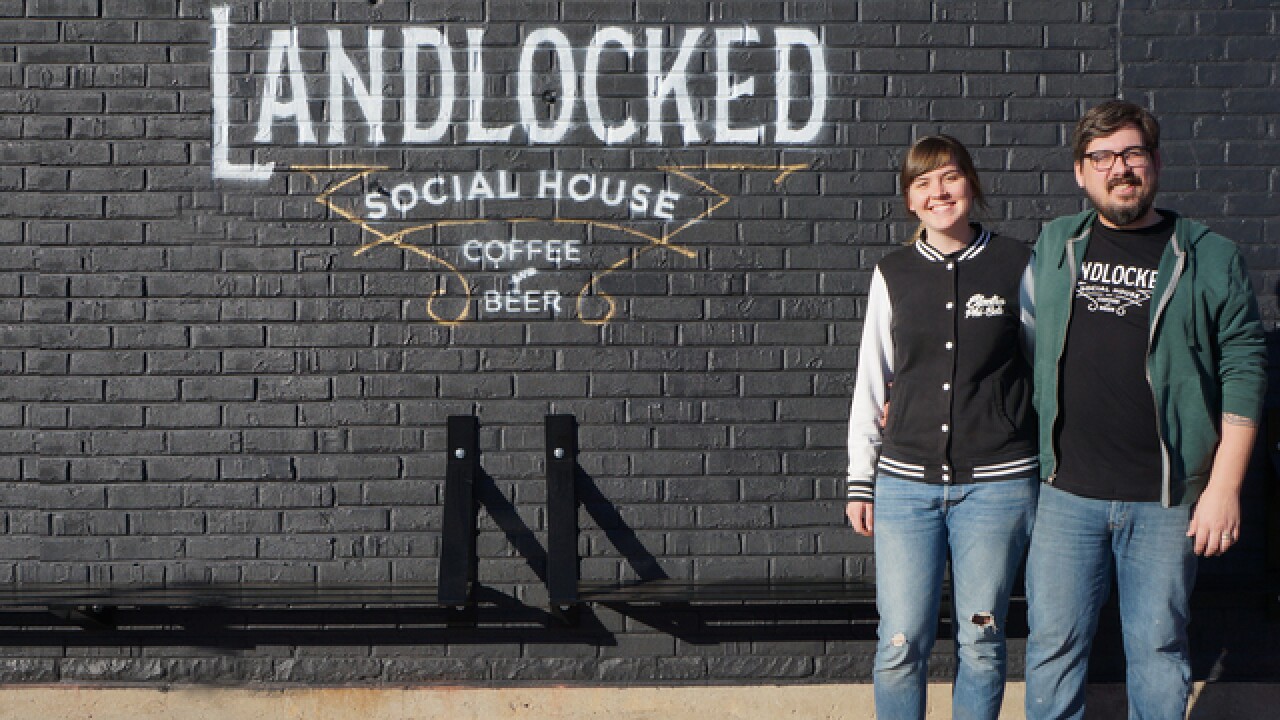 Copyright 2017 Scripps Media, Inc. All rights reserved. This material may not be published, broadcast, rewritten, or redistributed.
Garin Pirnia | WCPO contributor
<p>Anne and Andrew Decker pose in front of their new Landlocked Social House, which is scheduled to open in May or early summer.</p>

CINCINNATI -- Husband and wife Anne and Andrew Decker moved to Cincinnati in April 2016 from their hometown of Dayton, where she worked at Press Coffee for four years, and he was a manager at Eudora Brewing.

"We just knew that we always wanted to open a business together," Anne Decker said. "It was just figuring out where and when."

Pinewood Social in Nashville and The Great Lakes Coffee Roasting Co. in Detroit seamlessly mingle those elements together. However, there was no equivalent in this region.

Enter the Deckers' Landlocked Social House, a one-stop place in Walnut Hills for craft beer and coffee, geared toward tastemakers who like regional beers and third-wave coffee drinks. Landlocked officially opens June 7 from 6:30 a.m. to 5 p.m. on East McMillan Street just east of the Interstate 71 ramp.

The idea for Landlocked came from the desire to have both coffee and beer be the forefront of the business.

"I know plenty of bars that serve coffee, but it's a side thing or vice versa," Anne said. "We both are very passionate about each thing. Andrew is a beer nerd, and I'm a coffee nerd."

They initially considered opening their concept in Cleveland or Cincinnati, where Anne attended University of Cincinnati, but not Dayton.

"We didn't want to step on anyone's toes in Dayton, because we liked so many of the businesses. I didn't want to mess with any of that," Andrew Decker said.

Excited for tomorrow! See you bright and early! (Or like, later if you don't have to be up early ). • Open 6:30 am to 5 pm, 648 E. McMillan St. We are located right after the under construction 71 north on ramp. Where Boone Street meets McMillan. Plenty of street parking and a few spots behind the building as well. • Come say hello and grab a drink . #landlockedsocialhouse #cincinnati #walnuthills #coffee #beer #open #woodburlcoffee #donachai #lamarzoccolinea #mahlkonigusa #curtisbatchbrew #hariov60 #chemex #aeropress #coldbrew

A post shared by Landlocked Social House (@landlockedsocialhouse) on

As luck would have it, their friends at White Whale Tattoo owned their building. They suggested the Deckers move to Walnut Hills and rent the adjoining space.

To start, they will serve only Wood Burl Coffee, the roaster that Press Coffee created. They will make their own syrups and serve typical drinks like pourovers, cortados and cold brew on tap. Landlocked will serve espresso until 7 p.m. daily, but batch-brew coffee will be available until midnight, when the business will close.

Fifteen of the 20 taps will be dedicated to beer, while the others will be red and white wines, cold brew and sodas. Landlocked will sell its version of a breakfast stout, which will marry cold brew coffee and a low ABV stout, in the morning, giving new meaning to breakfast beer. It also will have an assortment of savory pastries and fermented veggies courtesy of across-the-street neighbor the Pickled Pig. Customers also will be allowed to bring in food from local restaurants like Gomez Salsa.  Curated cocktails also will appear on the menu board.

In February, the space appeared almost complete save for a window they needed to add in the front. They already had the La Marzocco espresso machine running, a beer garden built and the taps set up, but they needed $23,850 to add finishing touches such as completing the back of the bar and the window. That's why they launched a Kickstarter campaign, ending on March 8. (As of Feb. 23, they were almost halfway to their goal.)

While the Deckers wait for the results of their Kickstarter efforts, they're hosting occasional events. On Feb. 24, from 1-7 p.m., they brewed complimentary pourovers and espresso drinks, and they gave away Lil's Bagels. If people donate at least $25 to the Kickstarter, they will receive a private invitation to a March 4 party that will include complimentary beer, coffee, performances from bands and a dance party.

"It's just a matter of getting people in to check the space out and hear what we're about and what we're doing, and then hopefully once we open, they're interested in coming by and hanging out and getting some coffee and some beer," Andrew said.

When they aren't working at Landlocked, the Deckers want to travel the state's breweries in search of beers that aren't available in Cincinnati. They plan to visit Wolf's Ridge Brewing in Columbus and Platform Beer Co. in Cleveland and bring kegs to the shop.

"It still gets us to travel a little bit while owning a business," Anne said.

Andrew added: "The idea is to try and distribute beers that aren't necessarily hard to find but just maybe need to be brought down here to make it a little more accessible."

As for the name of the place, Anne and Andrew wanted something that was the opposite of White Whale's impression of the sea.

"We found a cool quote: 'When you're landlocked, you serve your neighbors.' I liked that a lot," Anne said. "It's the vibe we want to do here. We want people to come visit a place that's a destination spot, but we also want people that live right here to feel like it's their spot, too, and we're not opening this and shunning everybody in the neighborhood."

Anne loved working at Press, but she didn't love its monochromatic color scheme. ("I like color a lot," she said.) To rebel against it, she purchased a canary-yellow espresso machine.

Olive green is one of the Deckers' favorite colors -- "Most of our clothing is in that shade of green," she said -- so one of the walls is painted in that respect. A penny tile bar adds a clean aesthetic, as do the golden countertops and exposed brick.

"I want it to be comfortable, and I think the brick does that really well," she said. "I do like the clean minimal look, but I don't think everything needs to look like you can't touch it."