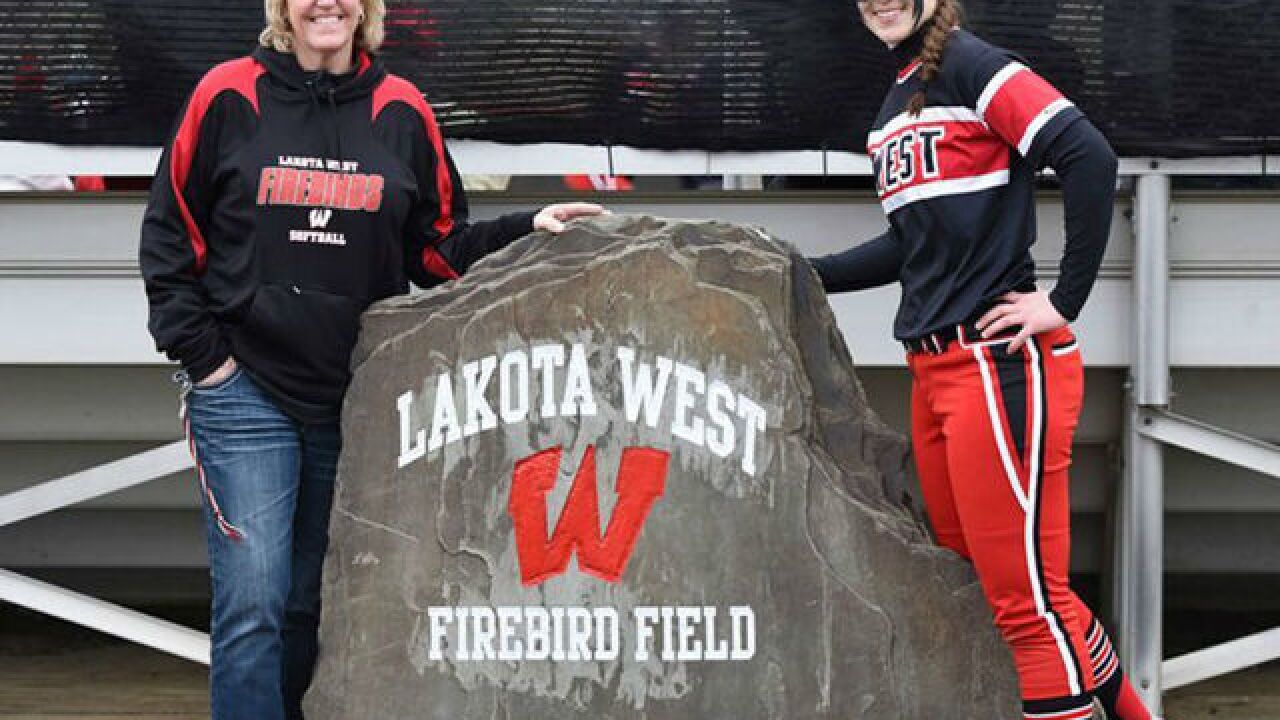 Copyright 2018 Scripps Media, Inc. All rights reserved. This material may not be published, broadcast, rewritten, or redistributed.
<p>Lakota West softball standout Allie Cummins credits her parents, Daryl and Shelly, for being a rock of support during her high school career. Shelly paints the rock at the Lakota West softball field before every season as a sign of team unity. (Jenny Walters Photography)</p>

It's more than a sport to the Lakota West senior shortstop and catcher. It's a way of life.

The two-time first-team all-state selection said she doesn't seek the accolades; she just wants to help her team.

"I love that you are set up to fail, and the feeling of overcoming that failure is what really makes the game exciting," Cummins said. "It teaches you that not all things in life are going to go the way that you want them to, but if you work and you push yourself to become better, then you can overcome those obstacles."

With so many significant statistics and program records , it's easy to forget the obstacles Cummins has overcome as a hitter.

The 18-year-old credits the West coaching staff with helping her earn a scholarship to the University of Akron. She has also received hitting lessons from area instructor and Ohio Hawks travel ball coach Wendell Hutchinson for five years.

Cummins admits her swing was "terrible" some years ago, but Hutchinson broke it down with her and rebuilt her approach. Now, Cummins' biggest challenge is maintaining a winning mindset. It's all about staying confident.

"He took me from a below-average hitter to a power hitter who also has a decent average," Cummins said.

However, it's her parents, Daryl and Shelly, who've given her the greatest support since she started playing softball 12 years ago.

"My parents are my rock, basically," Cummins said. "They taught me the basics."

Shelly (Klare) played softball and basketball at Reading High School before she had a standout hoops career at Western Michigan (1983-87).

Klare graduated second for points (1,459) and field goals (642), fourth for field goal percentage (.457), free throw percentage (.716) and assists (272). She was inducted into the Western Michigan Athletics Hall of Fame in 2015. She is also a member of the Norwood Sorrento's Greater Cincinnati Softball Hall of Fame .

"I couldn't be more proud of Allie's accomplishments on the softball field," Shelly said. "It's good to see all of her hard work and training over the years during the season and the offseason paying off."

Cummins, who plans to study Emergency Management and Homeland Security at Akron, said she is thankful for the support her parents have given her over the years. In turn, she likes helping other people in softball and in life.

"My parents have gotten me through slumps," Cummins said. "They have always been there. It's important they have my back because they are the ones that got me into it."

Starting in 2016, Shelly painted the red ‘W' on a rock at the softball field. It was Daryl's idea to get the rock.

"The rock signifies the strong foundation of the West softball program and every year new players build upon it to make it even stronger," Shelly said.

It was meant to be a decoration initially, but it soon became part of the Firebirds' pregame routine. The players touch the rock before every game.

"It's really an example of showing we have each other's back," Allie said Cummins said. "If the rock doesn't fall, then we can't fall. It's more like a mental thing for all of us. It really relaxes us and reminds us that it's just a game, and we need to give everything we have."

Though the weather has influenced the Firebirds' schedule like most area softball teams, Lakota West enters this week with a 3-0 record. Cummins was hitting .667 with four hits, a triple, two RBI, six runs and a stolen base through two games.

A glimpse of the Lakota West spring sports media guide exhibits how much Cummins has meant to this program.

Cummins already has the school career records for most hits, runs batted in and runs scored. She is tied for the most triples. Entering April 6, she was nearing the career records in stolen bases, home runs and extra base hits.

"Allie has been hitting the ball very well in the three scrimmages and the two games for us," Lakota West coach Keith Castner said.

"She knows the game very well. Allie knows when she needs to hit for power and when she needs to move baserunners over. She is confident when she goes up to the plate. Our team knows that Allie will come up with big hits throughout the season. She will help other players on our team with their hitting if she sees they are struggling. "

Cummins says the records are nice, but she is focused on the team whether that's getting a timely hit, getting down a bunt or stealing a base.

"I love the pressure situations," she said. "There is nothing more exciting than getting a big hit with the game on the line."

Ultimately, she wants the Firebirds to reach the state Final Four this spring. The team supersedes the individual recognition.

"She doesn't dwell on being a star," Hutchinson said. "She is very humble. She doesn't act like that she is the best player on the field. She is one of the kids doing her part to win."