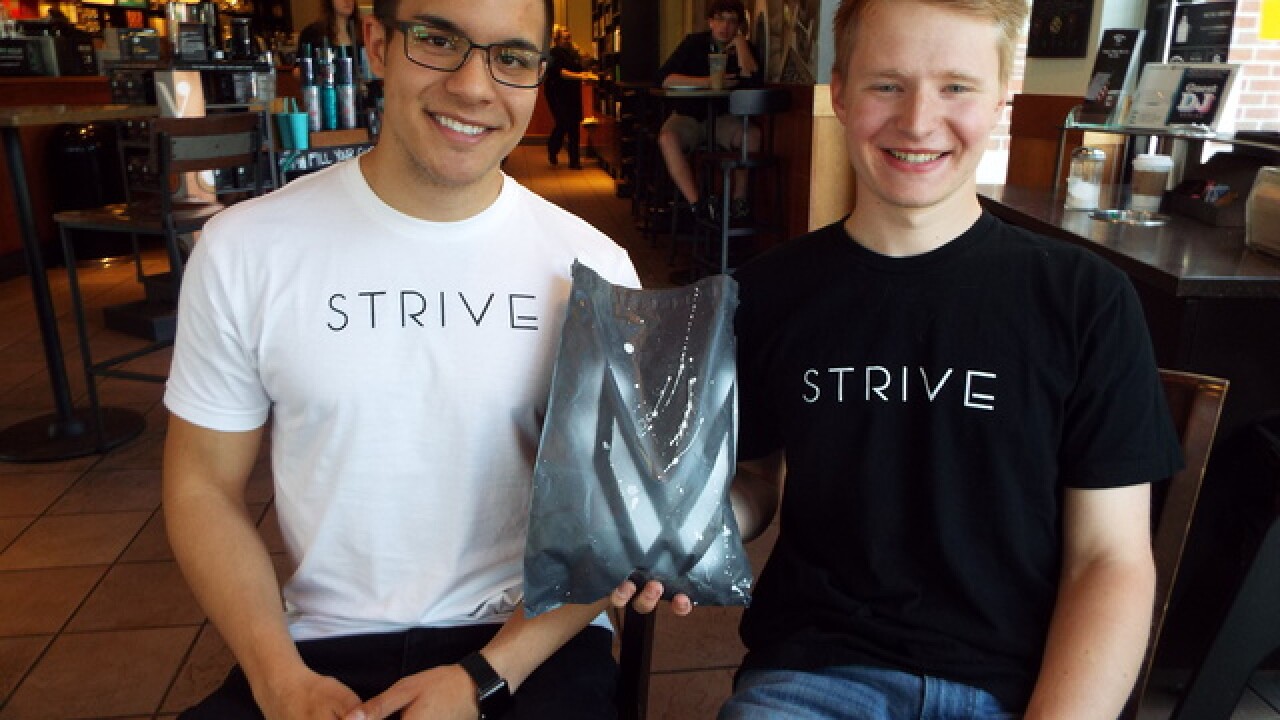 Copyright 2017 Scripps Media, Inc. All rights reserved. This material may not be published, broadcast, rewritten, or redistributed.
Kevin Eigelbach | WCPO contributor
<p>Andrew <span data-scayt_word="McEwen" data-scaytid="8">McEwen</span>, left, and Jackson Welch pose with one of their Strive T-shirts.</p>

It's the brainchild of Andrew McEwen, a graduate of Lakota West High School in West Chester, who'll be a sophomore this fall at Capital University in Columbus.

McEwen, who plays on the university's soccer team, loves soccer and loves to make videos. Over the summer of his junior year in high school, he and some classmates began making soccer videos that they uploaded to Instagram at @mcew_football , which now has more than 160,000 followers.

Last summer, at the height of the Pokemon Go craze, they filmed McEwen, dressed like a Pokemon character called Ash Ketchum, kicking a soccer ball, made to look like Pikachu, into a goal. It went viral, and even got a mention on Fox Sports.

McEwen posted videos of how he customized his soccer cleats. He posted photos of cleats, one of which had 242,000 views by 211,000 people. A video of him crushing an egg with a cleat garnered 776,000 views.

The team also posted videos about McEwen's life, which many viewers found inspiring. They started asking him questions about how to become soccer players themselves.

In January, he received an email from a mother who told him she'd enjoyed watching him grow up via video, and that he'd given her son a great example to follow.

"The moment I received that, I sort of just took a moment to realize the potential our (Instagram) account has to inspire people," McEwen said. "I thought, 'This needs to be something.' "

That something was McEw LLC, which McEwen created along with high school classmate Jackson Welch and college classmate Chandler Freeman.

"We had this audience, we saw this opportunity and built the company to sort of inspire people," McEwen said.

Its first product is a T-shirt of a simple design: the word "Strive" on the front, and a logo designed to look like a pair of wings on the back. They come in gray, plastic packages imprinted with the logo and splattered with white paint, like a Jackson Pollock painting.

"It's a piece of artwork on its own," Welch said of the packaging. "When you get it in the mail, you know it's something of quality."

They began selling T-shirts on their website on May 7 for $30 plus postage. Less than a week later, they had sold more than 100, shipping them to countries as far away as Indonesia.

They'd originally had 250 T-shirts printed, and were ordering another 250 because they had already run out of their supply of small and large sizes for men. That was in part because women were buying the small men's shirts, because they liked the wider shoulders and looser fit at the bottom, McEwen said.

Freeman fulfills the orders using the U.S. Postal Service station at Capital University. When he sends a T-shirt to a country he hasn't sent one to before, he includes a note letting the buyer know that they are the first in that country.

The T-shirts have made a profit -- McEwen wouldn't say how much. But it's enough to enable the founders to buy more T-shirts and keep the business going. So far, they've bootstrapped the business, whose expenses have been minimal, from their own funds.

They plan to continue to expand the business into other apparel. When you see someone wearing the wings logo, McEwen said, they want you to think, "That person's a striver -- they're being the best they possibly can."

But there's more to their business than selling stuff. With the idealism of youth, McEwen and Welch say they care about their customers, and want them to be strivers. They've created a community of like-minded people, many of whom have volunteered to help them spread the word about Strive.

"Follow the strive idea and you can keep building yourself … despite what life throws at you," McEwen said.