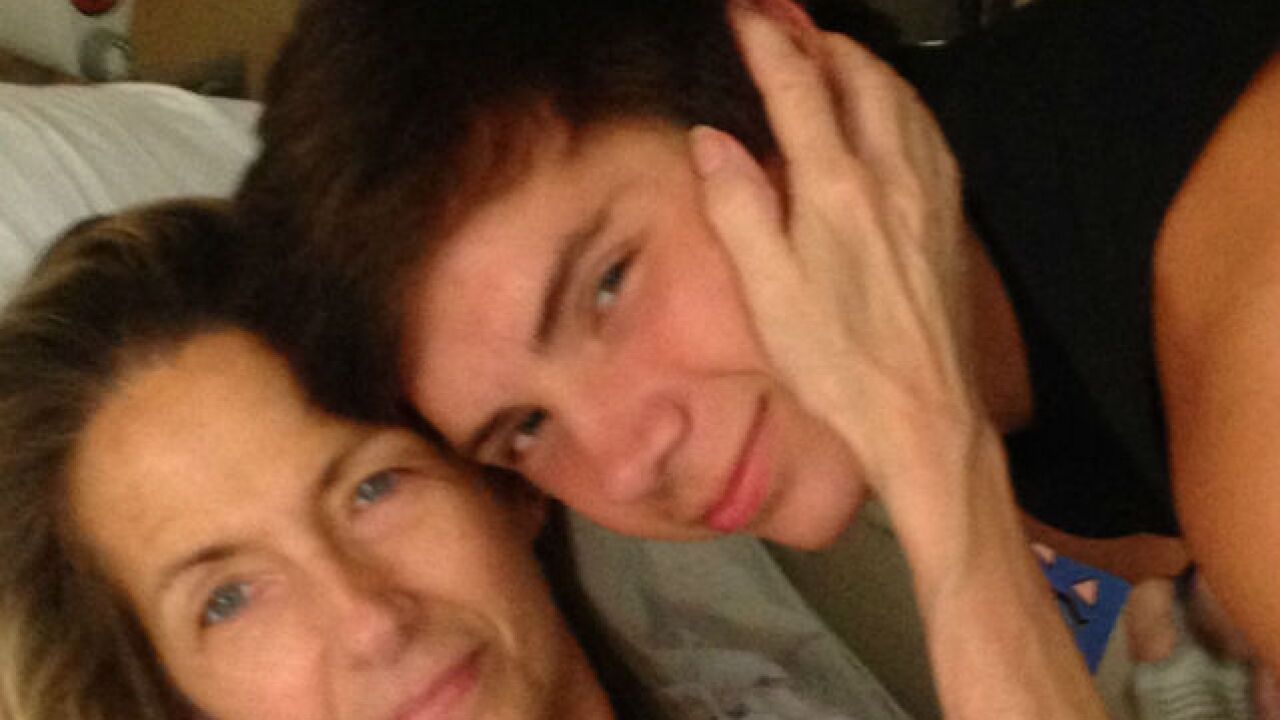 GREEN TOWNSHIP, Ohio – Each morning, Ethan Campbell says a prayer and reflects on his late mother.

A new dawn brings a new opportunity for Ethan to remember Twila Campbell's impact on his life. He is blessed with plenty of good memories.

One of those recollections for the La Salle senior defensive end is the breakfasts Twila usually prepared while he was in grade school.

Pancakes, waffles or cereal were the norm. The cinnamon rolls were something else.

Soon after breakfast, she drove her youngest son to school. Ethan attended the Northwest Local School District until the eighth grade when he went to St. John Baptist in Dry Ridge.

“I could talk to her about anything,” Ethan said. “We could be silly – it was like talking to one of your friends.”

This September will be two years since Twila died after a two-and-half-year bout with cancer. She was 53.

But, Ethan, a 6-foot-2, 220-pound Yale commit, finds inspiration in knowing how she battled, how she exhibited courage and how her Christian faith continues to be an example to the family.

“His relationship with my mom was a very tender relationship,” said Allie Nitzschke, the eldest of the four Campbell siblings. “She was very compassionate and tender toward him. She was his biggest fan.”

Twila and her husband, Kevin, a married couple of 26 years, took every effort to raise their children – Chris, Travis, Allie and Ethan with a togetherness that went past familial bonds.

Chris serves in the United States Marines while Travis works in information technology in Cincinnati.

When Twila was diagnosed in June 2012 with stage four metastatic cancer, her challenging journey only brought the Campbells closer in a time when all of them needed it most.

Twila's doctor told Kevin with the amount of cancer in her body in the summer of 2012, she would likely not be alive by the end of the year. Instead, she persevered for more than two years.

When Twila was in hospice at the family’s rural Colerain Township home, her condition impacted Ethan at his core.

“It was pretty hard because I would have to sit here and listen to her cry,” Ethan said. “That’s a pretty powerful and impactful thing for a kid when he is 13, 14 or 15 years old to get through that whole ordeal. You have to listen to that for 2 ½ years. It was pretty hard.”

For Kevin, there was no roadmap at that time. The now-retired Cincinnati firefighter couldn’t have expected such sorrow.

But, he was called upon as caretaker to lead his wife and children even in the hours of their most extreme emotion.

“My dad is the most dependable guy you will see,” Allie said. “My dad’s character was refined through fire. He is just a great man.”

Sometimes Kevin wondered how Twila would get through some nights. The family attended Whitewater Crossing Church in Cleves, but their faith was tested. Twila persevered anyway.

“She was always our momma bear,” said Allie, a youth minister in Lafayette, Indiana. “To see her suffering – I am not sure how to describe it. It breaks you a thousand ways.”

Twila spoke with each other children one-on-one in her final days in a very sad yet empowering conversation.

Even with cancer, Twila, a pediatric nurse of more than 30 years, exhibited gracefulness that family and friends still discuss.

She reached out to a child who had pediatric cancer for a sweet embrace. Her intuition allowed her to ask about others even when their problems may have paled in comparison.

Turns out Twila defined the cancer; it didn’t define her.

“Twila was a beautiful woman both inside and out,” said UC Health Barrett Center oncology nurse Debra Overly. “Her heart was just like gold.”

Ethan, 17, told his mom he wanted to play college football one day. Twila told him if he wanted the opportunity, he needed to go after it. And so he did.

Even in youth football when Twila may not have understood the entire rules of the Little Cards youth football game, she knew her son’s passion for playing. His parents' support meant everything.

“My dad is there for everything,” Allie said. “It doesn’t matter if Ethan had a game in Africa or Australia.”

Last week, Ethan committed to Yale after he considered multiple other opportunities in college football. He plans to study economics and finance.

“Man, could you imagine what momma would say if one of her babies was Ivy League bound?” Allie said.

“I just wish that I could see my mom’s face telling her I’m going to Yale,” Ethan tweeted last month. This week, Ethan reflected on what her reaction may have been.

Ethan knows how significant the opportunity is to attend Yale. But, he is focused on his senior season first and foremost. La Salle, the two-time defending Division II state champions, open the season Aug. 26 against Sycamore in the 19th annual Skyline Chili Crosstown Showdown at Nippert Stadium.

Kevin can’t say enough about how Ethan stayed on the correct path during the difficult times of his grief. Ethan created this opportunity to be a standout at La Salle. But, the story doesn't end his senior season.

“For him to stay focused, which was my goal and hope, to go from the darkness of those days to having the opportunity play football and go to school in the Ivy League. Two years ago that was so far from our thoughts. It was a struggle to get through each day. I am kind of overwhelmed and extremely proud because this is him and what he’s done. He’s the one who managed through the dark times.”

La Salle coach Jim Hilvert sees Ethan as a tough, hard-nosed player who seizes a leadership opportunity in the weight room and on the field.

Just like the 31 other seniors at the Greater Catholic League South division program, there is a sense of urgency. Ethan has taken a significant step from last season in his aggressive approach, according to defensive line coach Brian Heidorn.

Even though Ethan has been a part of back-to-back Division II state titles with the Lancers, there are days when practice is a grind. Football can be like that.

But, Ethan has perspective. He knows the physical and emotional toll his mom went through with cancer was a “thousand times” worse than any football practice in the hot or frigid temperatures.

“I can get through anything,” Ethan said. “I have pretty much been through one of the worst things in my life already. So anything else that comes at me is just tiny.”

And he has plenty of support from his family and the words his mother told him directly.

Twila wrote a letter to her son that Kevin gave to Ethan during a retreat at La Salle this past spring.

She never wanted her cancer to defeat Ethan. She wanted Ethan to graduate high school. She wanted him to be happy.

Twila couldn’t finish the handwriting so Kevin typed the remainder of the letter. Ethan keeps it in his car or his wallet.