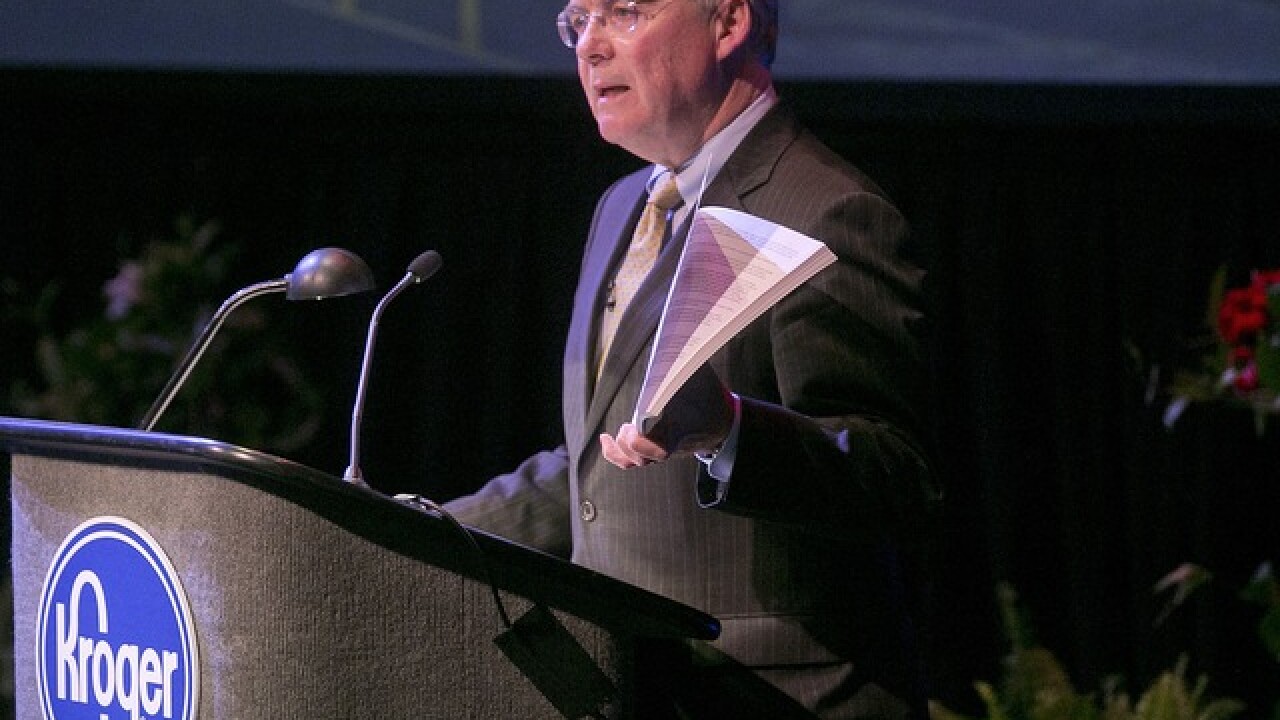 Copyright 2017 Scripps Media, Inc. All rights reserved. This material may not be published, broadcast, rewritten, or redistributed.
Jim Callaway
<p>Kroger CEO Rodney McMullin holds a copy of the Kroger 2016 Annual Report during the annual meeting of Shareholders Thursday, June 22, in Cincinnati. Photo provided by Kroger</p>

CINCINNATI - Is it a slogan or a mission statement? That’s not yet clear. But trademarked phrase, “Feed the Human Spirit,” is now officially part of the Kroger Co. lexicon.

Shareholders attending the grocery chain’s annual meeting in Cincinnati yesterday couldn’t help but learn the new mantra. It was used on banners and in a promotional video. It comprised much of the speech that CEO Rodney McMullen delivered in his annual report on business results.

“I often say that in the future, our customers will determine whether or not to shop with us based on how well we take care of our people, our communities and the planet,” McMullen said. “Across the country and every day in our stores, offices and facilities, we make the world a better place one associate, one customer and one community at a time.  This is Kroger’s purpose: To Feed the Human Spirit.”

Further defining the new mantra, Kroger opened its annual meeting with a one-minute “Year in Review” video at the School for Creative and Performing Arts in Over-the-Rhine.

It’s not the first time Kroger executives have used the phrase. McMullen debuted it in closing remarks to employees, when Kroger held its first-quarter earnings call June 15. And Chief Financial Officer Mike Schlotman used it in a conference call with Wall Street analysts Wednesday that the concept of feeding the human spirit differentiates Kroger from Amazon.

“Feeding the human spirit is more than just feeding the human belly,” he said. “Our associates get to help customers have a better day and it's through big things and little things … You can only do that with a physical connection with the customer. You can't do that by coming home and having a box on your front porch waiting for you.”

Asked whether it represents a new marketing campaign, Kroger spokeswoman Kristal Howard said more will be revealed “over the coming months.”

Campaign or no, the concept met with some dissonance when shareholders got a chance to speak.

One shareholder who declined to provide his name said shoppers want clean stores and well-stocked shelves, not the lofty goals presented in the video. That shareholder said Kroger should be more like Wegmans, a family-owned grocery chain that’s popular in the northeastern U.S.

Three additional shareholders spoke in favor of reform proposals, calling on Kroger to reduce its use of non-recyclable packaging materials, increase its use of renewable energy and make changes in its supply chain that reduce global deforestation. Shareholders voted against all three proposals by roughly three-to-one margins.

Two speakers called on Kroger to join the Fair Food Program , a workplace standards initiative that promotes better working conditions and higher pay for farm workers. Its backers have sought Kroger’s endorsement at eight straight shareholder meetings. McMullen told the speakers that Kroger has its own policies that require the fair treatment of farm workers and it doesn’t want a third party to be able to dictate contract terms for its produce purchases.

“I’m really baffled at Kroger’s refusal to join,” said Wendy Silivis, education director for Slow Food Cincinnati. “If Kroger’s written policies were enough to guarantee these rights, Kroger would not have purchased tomatoes from a grower who was fined $1.4 million last year by the Department of Labor.”

After the meeting, McMullen told reporters he wasn’t aware of that allegation, but vowed to look into the matter.

On the whole, however, it was a cordial crowd that greeted Kroger executives. They politely applauded as the company announced a dividend increase from $0.48 to $0.50 for the current fiscal year. The board also authorized a $1 billion share repurchase program that demonstrates some confidence in its ability to operate profitably in the months ahead.

Shareholders voted more than 93 percent in favor of Kroger’s executive compensation plan, which was less than the 95 percent approval rate last year. Another proposal, asking the company to promote board independence by separating the roles of CEO and Chairman, was rejected by 64 percent of all shares cast.

After the meeting, McMullen told reporters that he’s confident the company can navigate the rising competition between Kroger its discount-driven rivals, such as Walmart, Amazon, Lidl and Aldi. And he re-affirmed his support for a Downtown grocery store, saying nothing has changed in the last few weeks to shake his resolve that the store will connect with loyal customers.

“On Saturday, I was working and I walked up to Findlay Market to grab something, a hot dog for lunch,” he said. “And you know the vibrancy and excitement of the people just makes me increasingly feel good about the things that are happening in Cincinnati. And I think that store will do incredibly well and connect with our customers in a great way.”