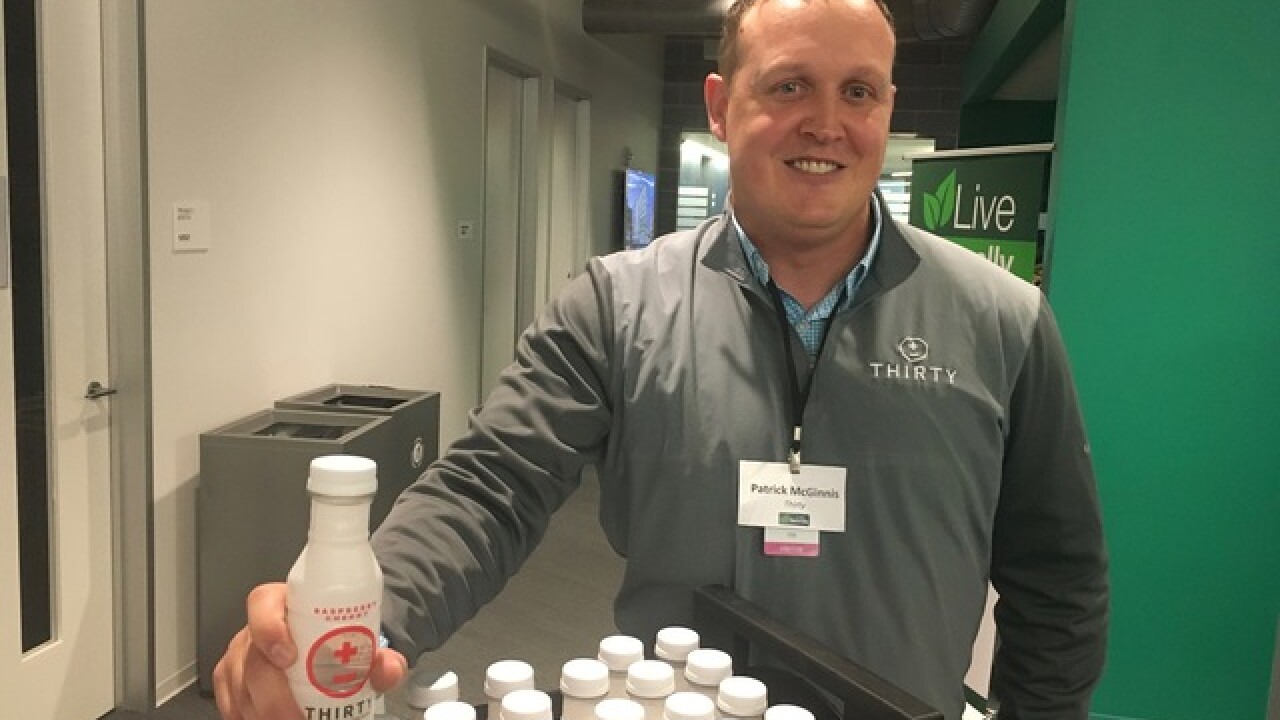 Hence, the Findlay Market startup was among more than 40 vendors invited to a natural foods innovation summit Thursday at the 84.51 building Downtown. Kroger and its data-mining subsidiary are looking for every edge they can find against the Amazon-recharged Whole Foods chain.

Robert Ryan is happy to oblige with his newest product: A calorie-free seltzer water infused with cannabidiol, a chemical compound found in marijuana. It’s a non-psychoactive ingredient, meaning it won’t make you high. But it might help with migraines and arthritis.

“CBD is a natural anti-inflammatory and also an antioxidant and neuroprotectant,” said Ryan. “So, not only does it boost your immune system but it’s going to help you combat disease.”

Natural foods and organics already represent a $16 billion business for Kroger, a roughly 2,800-store grocery chain with $115 billion in 2016 revenue. Kroger is enjoying double-digit growth in the category, partly by embracing small regional brands like Queen City Hemp and helping them grow.

Ryan offered samples of his carbonated beverage to Kroger vendors and buyers at Thursday’s innovation summit. He’s hopeful that the product will eventually find its way to Kroger store shelves. For now, he’s selling hemp tinctures and vape refills through health food stores in eight states.

Some of the vendors at Thursday’s summit already do business with Kroger. Others were just pursuing deals and learning about industry trends. Queen City Hemp was one of the few local firms in attendance. Kroger is hoping to continue the summits on a quarterly basis for other product categories.

“We love emerging brands because they’re at the forefront,” said Jill McIntosh, Kroger’s vice president of natural foods merchandising. “We can give them helpful advice on packaging, ingredients, go to market strategies. It’s important to us.”

That’s the kind of advice Patrick McGinnis got from Kroger buyers, when he first pitched them on Thirty, a fruit-flavored “recovery drink” with 30 calories and three times the electrolytes of other sports drinks.

McGinnis, founder and CEO of Recov Beverages LLC, said Kroger urged him to expand his flavor offerings. He went from two to five flavors and is willing to add more as distribution grows.

“It’s going to be a flavor-driven brand,” he said. “I’d love to see as many flavors as Gatorade and Powerade. There’s no reason that we can’t. As long as consumers keep demanding them, that’s a great opportunity for us.”

Thirty sells for $1.79 per bottle in local United Dairy Farmers stores and on Amazon. McGinnis is hoping to land on Kroger shelves by early next year. He was encouraged by what he learned at the innovation summit.

McGinnis and Ryan both said their companies could ramp up production if Kroger placed a big order. McIntosh said natural brands often start with a regional offering, expanding to other geographies over time. But both are competing in a hot segment: Beverages.

“We’re not only growing with new people, like people who’ve never shopped in natural foods, but we’re also growing with our current natural foods shopper,” said Alex Trott, 84.51's merchandising client lead for natural foods. “Both of those shoppers are growing their spend, which is why we’ve had this really incredible and sustained growth over several years.”

Although competition is intensifying with Amazon’s purchase of Whole Foods, Kroger is undaunted.

McIntosh said Kroger is developing “an e-commerce platform” so it can ship natural and organics directly to consumers.

And the just-announced “Restock Kroger” strategy will create new opportunities for natural and organics items because it will enable individual stores to use loyalty card data to optimize store shelves. That means the hottest products in every store will have plenty of shelf space, based on the buying behaviors of shoppers in that particular store.

But it also means new brands like Thirty and Queen City Hemp could find customers more quickly, if Kroger launches them in stores where natural and organic beverage products are already booming.

What that means for Queen City Hemp depends on Kroger’s willingness to be an early adopter of beverages with cannabidiol, or CBD. An August report by Tampa, Florida-based Brightfield Group estimates CBD products generated $170 million in revenue last year and it’s predicted to reach $1 billion in three years.

“CBD is a white-hot industry right now,” Ryan said. “Everyone’s talking about it but there’s a lack of education around it. So, that’s a majority of how we spend our time, educating about the benefits of it, the legalities of it. So, big-time grocery stores, I see it eventually coming to that but that’s going to take some time.”