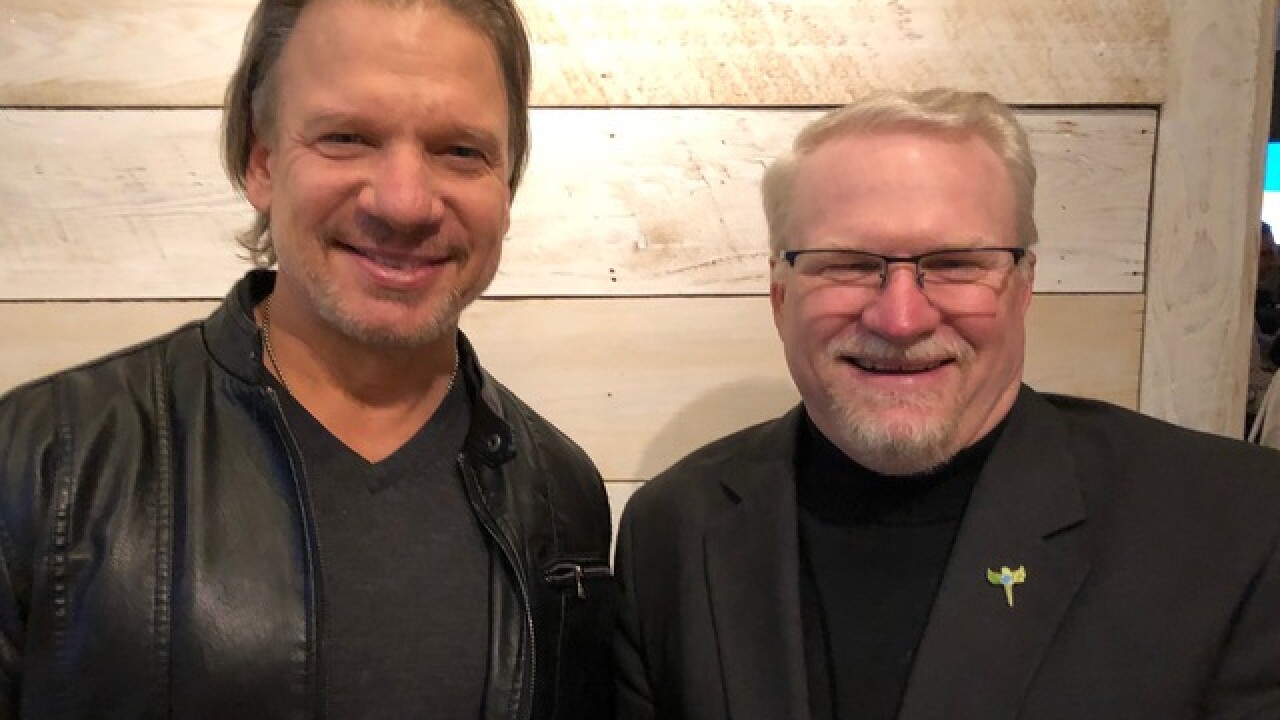 Copyright 2018 Scripps Media, Inc. All rights reserved. This material may not be published, broadcast, rewritten, or redistributed.
Courtesy of Jason Barkeloo
<p>Mark Pohlkamp, left, is the CEO of Knowbella Tech. Jason Barkeloo, right, is the company's founder and chairman.</p>

COVINGTON, Ky. -- At a time when the U.S. Securities and Exchange Commission is cracking down on companies trying to cash in on the bitcoin craze, a local business aims to raise $50 million through its own cryptocurrency offering.

Don’t understand bitcoin? You’re not alone. It’s a type of digital money that people use to buy and trade things, and it’s not connected to any type of central bank. Bitcoin was the first decentralized cryptocurrency, but now there are lots of others.

Knowbella Tech CEO Mark Pohlkamp said his Covington-based company’s offering will be different from those that are causing worry at the SEC because it seeks to raise money through Regulation A, a federal rule designed to allow smaller companies to raise funds while at the same time protecting investors.

“We haven’t seen any other company make a filing with the SEC that looks like this,” said Mark Reuter, a partner at the law firm of Keating, Muething & Klekamp , which is working with Knowbella Tech. “That’s what makes what these guys are doing so special.”

Knowbella Tech is an early-stage company that plans to use the money it raises to launch an “open science collaboration platform.” The company’s goal is to unlock the potential of up to $4 trillion worth of intellectual property and scientific research that isn’t currently being used productively. Pohlkamp likened it to the way Airbnb helps people make money from apartments and houses that aren’t being used.

Scientists that conduct research on the platform will get paid with the tokens that Knowbella Tech will be generating through its securities offering. The tokens will be named Helix, “The Currency of Science.”

Following the detailed requirements for Regulation A is the company’s way of making the investment opportunity open to everyone -- not just wealthy investors -- while at the same ensuring that smaller, mom-and-pop investors have some protections, said Jason Barkeloo, founder and chairman of Knowbella Tech.

“The opportunity was to balance and even the playing field,” Barkeloo said. “Most people that aren’t high net worth can’t participate in the upside of a Facebook. They’re excluded from the ability to generate wealth.”

The strategy is not the most conservative one available when it comes to what is called an “initial coin offering,” or ICO, said Christian Catalini, founder of the MIT Cryptoeconomics Lab at the MIT Sloan School of Management in Cambridge, Massachusetts.

The most conservative, he said, would make the offering available to only wealthy, “accredited” investors.

“It’s somewhat a middle-of-the-road approach,” he said of Knowbella Tech’s strategy. “The advantage is they’ll be able to more openly market.”

The other advantage, Barkeloo said, is that Knowbella Tech should be able to stay in the good graces of the SEC without any problem.

“It’s very expensive and very time-consuming. But, boy, does it take the risk out of the equation,” he said.

‘They want to be fully transparent’

Lots of other companies have gotten into hot water with the SEC in recent months after filing initial coin offerings without going through the Regulation A process.

A public statement from the SEC issued March 7  said some of the online platforms engaging in ICOs provide a way to trade assets that meet the definition of a “security” under the federal securities law without first being registered with the SEC.

That has federal officials worried, and Catalini said he couldn’t blame them.

“We’ve tracked about 1,500 of these offerings in a new research paper that will come out in the next few weeks,” Catalini said. “There’s a large share that seem to be fraudulent.”

Just like the days of the dot-com bubble, a lot of these companies have big ideas without the expertise or skills to build their businesses, he said.

But Barkeloo and Pohlkamp aren’t 20-somethings hoping to strike it rich. Both have decades of experience, and they said they want to build Knowbella Tech the right way. Pohlkamp is a mechanical engineer with more than 20 years experience in technology sales, startups and business development. Barkeloo is a U.S. Army veteran turned science teacher who then became serial entrepreneur with six other companies to his name.

“We’ve seen the SEC becoming very aggressive about going after ICOs that are either fraudulent or do not comply with the registration requirements of the federal securities laws,” Reuter said. “Our client has asked us to do the exact opposite. They want to be fully transparent.”

Pohlkamp said Knowbella Tech doesn’t need to raise the full $50 million in order for its ICO to be successful. Even raising half that amount would help the company continue to hire people, build its open science platform and expand marketing efforts to get more scientists interested in the platform.

A lot of people investing in ICOs are using wealth they have built by buying bitcoin and seeing its value grow, Pohlkamp said.

But Catalini said that investing in multiple cryptocurrencies doesn’t diversify an investor’s holdings in the same way that diversifying in different stocks does. That’s because the majority of the new cryptocurrency businesses will fail, he said, just like so many of the dot-coms did.

“People should not invest anything in this space that they cannot afford to lose today,” he said.

For their part, Pohlkamp and Barkeloo said they’re looking forward to building Knowbella Tech and its open science platform and watching scientific collaborations lead to breakthroughs that they believe could help people across the world.

“We’re going to benefit society, the environment and generate a good return for investors,” Pohlkamp said.

The SEC will provide the company with comments on its filing, which could take some time, he said, adding that he estimates the company will make the offering in between 90 and 120 days.

And to make sure Knowbella Tech is following all of the SEC’s rules, Reuter said he wanted to emphasize the following:

“No money or other consideration is being solicited for the Regulation A offering at this time and if sent in to the company will not be accepted. No offer to buy securities in a Regulation A offering can be accepted and no part of the purchase price can be received until the offering statement is qualified with the SEC. Any such offer to buy securities may be withdrawn or revoked, without obligation or commitment of any kind, at any time before notice of its acceptance given after the qualification date. Any indications of interest in the offering involves no obligation or commitment of any kind.”