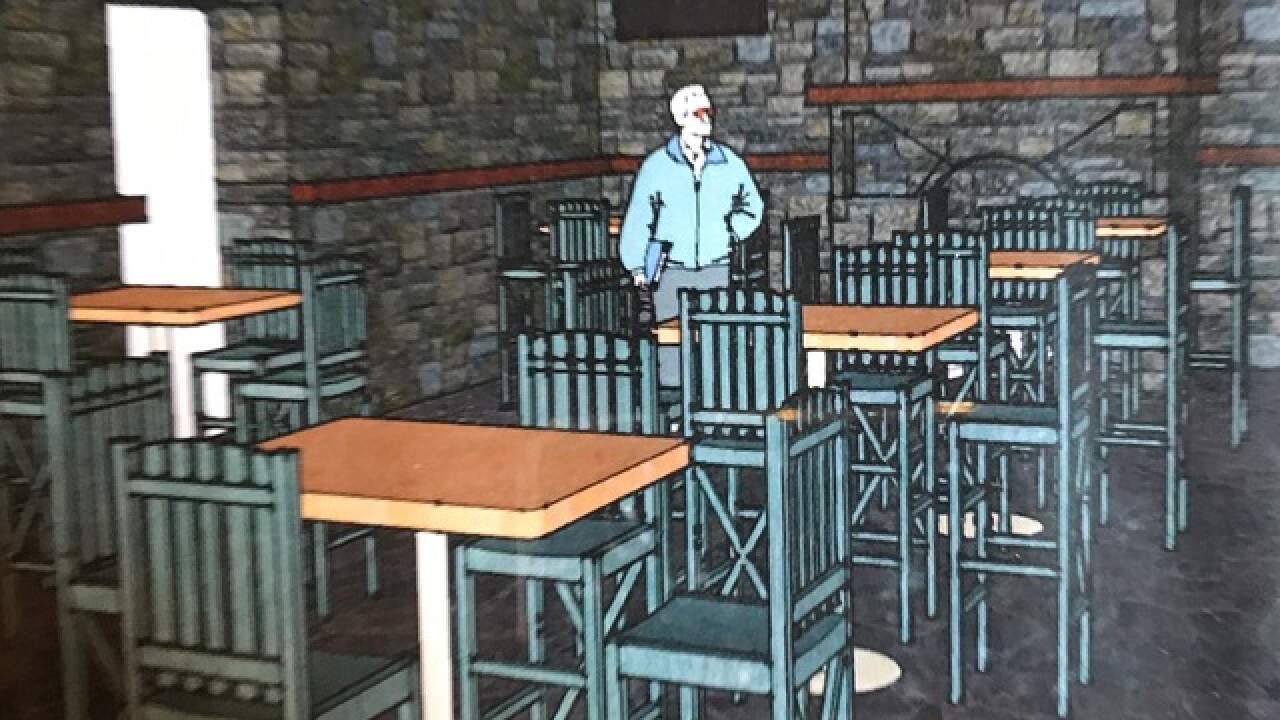 HAMILTON TOWNSHIP, Ohio -- It was a chance for students to have a real-life, out-of-college experience.

Except they aren't in college.

They are juniors and seniors from Kings High School in Deerfield Township who were offered an opportunity to design the interior and exterior as well as provide wall art for a nearby restaurant and bar.

The best part is their designs will actually be used for the Monkey Bar & Grille in Hamilton Township, owned by Mark and Amy Altemeier.

Click here to view a gallery of the students' designs.

"It's a win-win for everybody," said Mark Altemeier. "The community loves what we're doing, but I'm excited for the kids."

The students, teachers, parents and community celebrated the students' work at a presentation and open house Friday at the bar.

The building that is transforming into the Monkey Bar & Grille opened in 1841 as a hotel near the railroad and sits on the edge of the Little Miami River.

And, yep, the name is historical -- the story goes that once upon a time there was a real monkey on the bar – actually a chimp named Sam , who smoked and drank with the bar's patrons.

Or, that's the rumor, said Ray Warrick, Hamilton Township administrator. "It's a salty history." Folklore is that a previous owner -- likely in the 1960s or '70s -- won the chimp in a poker game.

The lower basement level also has a "speakeasy" peek-through window hidden behind a carving. Warrick said it's likely from Prohibition days.

When the Altemeiers bought the building last year, the basement was full of junk. It now houses a bar and highlights the original stone foundations and two stone fireplaces. A new structure of red brick mixes with the stonework, and two levels of patios give a view of the Little Miami.

The building also sits across from the Little Miami Scenic Bike Trail, and the owners hope cyclists will stop in for lunch or a beer.

Three students from Kings High's architecture class worked on the project. Isaac Chunn, a junior, Hunter Blair, a senior, and Clay Spivey, also a senior, worked as a team following professional protocols to work with their clients.

It was reality for them and "cool."

"Something I designed was used, and that's really cool to see," said Chunn.

Chunn, who wants to be an architect, worked on basement designs, including something like a wall railing separating the stones of the original foundation from the restored part.

The downstairs space had an existing bar, staircase and fireplaces, so Chunn had to work with those elements. Walkway and flow was important to his design.

The Altemeiers offered critiques, and were clear about their ideas.

"It was not just about making it pretty, but functional as well," he said.

Blair liked seeing his brick structures on the patios, and brought his ideas, including three outdoor fireplaces, to the design. He also pitched a retractable dock along the patio from which folks could drop their canoes into the Little Miami.

Kings High School fine arts and architecture teacher Angela Guilfoyle said this is the first year her classes have worked on projects that are actually coming to life.

"Mark and Amy came to me through a mutual friend," she said. "They wanted to get students involved."

Not everything will happen at once. Mark Altemeier said the retractable canoe dock, for example, likely will happen after other work is done, and it will be a project done with the township.

A bike path to a new housing development is also part of the discussion, said Warrick. The home developer, the township and the Altemeiers will work together to make that happen.

As for the teens?

The seniors will head off to college, but those still in school will likely work on the Altemeiers' next project -- a breakfast and coffee shop in a white house near the bar.

And Amy and Mark Altemeier both made a plea to the township and other local businesses Friday.

"We want to make this a working model for other businesses," said Amy. "It's about the community."