Kimmi's story: How this hard-working mom supports herself and her daughter

'I'm still trying to bounce back from things' 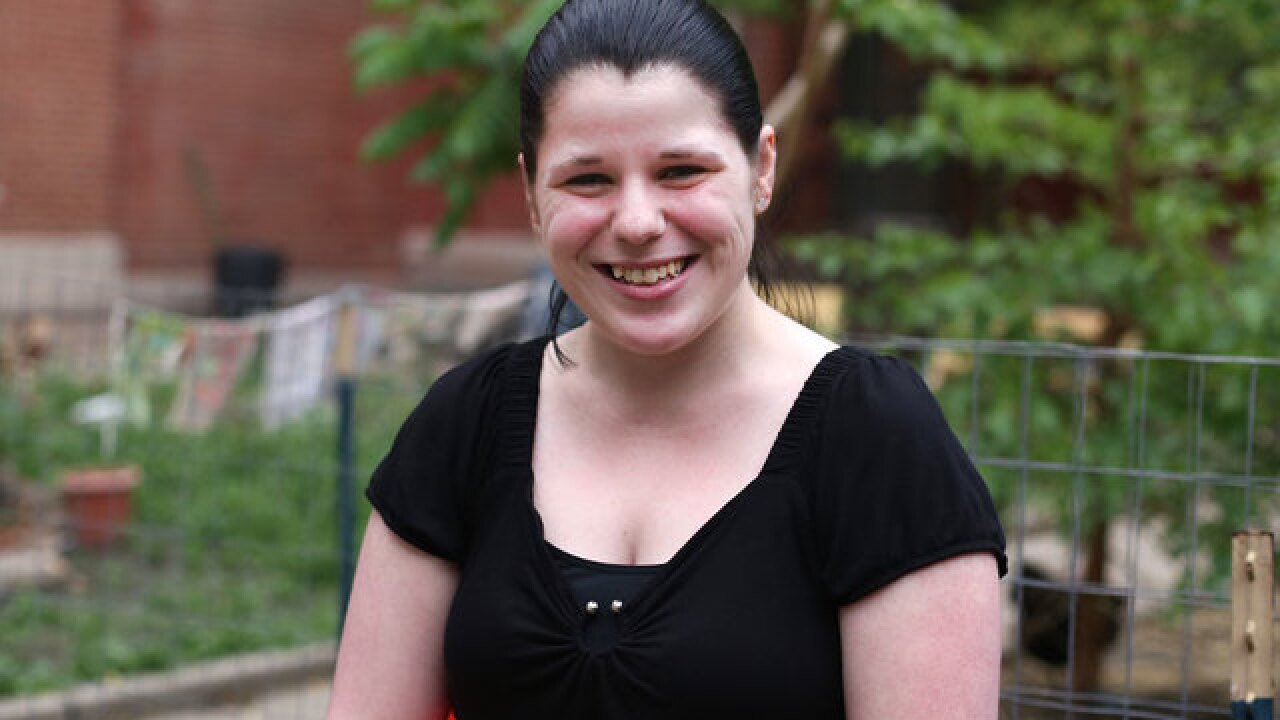 Copyright 2017 Scripps Media, Inc. All rights reserved. This material may not be published, broadcast, rewritten, or redistributed.
Emily Maxwell | WCPO
<p>Kimmi Washburn, 23, struggles to support her family on her $10 an hour in Lower Price Hill. Mary Delaney, executive director of the nonprofit Community Matters, has helped Washburn over the years and remains a vital support system.</p>

CINCINNATI -- Kimmi Washburn earns $10 an hour working full-time for a childcare center and works as much overtime as she can.

But she and her fiancé still struggle when it comes to supporting themselves and their 6-year-old daughter, Haylee.

Washburn lives in subsidized housing, paying 30 percent of her income for rent. The more she works, the more she earns and the more rent costs. She already makes too much money to qualify for much other government assistance.

Her fiancé is her biggest support system, Washburn said. But he didn't graduate from high school and has trouble finding long-term work. He mows grass and does odd jobs when he can around Lower Price Hill, where he and Washburn met and where she and her daughter now live.

"The overtime I work is really good, but sometimes I don't think it really makes too much," she said. "Sometimes it's what pays the bills. It's what buys the food. But sometimes when I look at my paycheck, I think … we could all use a raise."

Tens of thousands of children across Greater Cincinnati live in poverty. In the city of Cincinnati, an estimated two-thirds of them live in households led by single mothers. The majority of those mothers work.

That's not how Washburn sees herself, though.

Sure, she's supporting her family on one income. But Washburn, 23, has been with her fiancé for nearly eight years and doesn't think of herself as a single mom.

She works hard and pays her bills and has enough left over to buy Haylee the occasional bag of chips for a treat.

Kimmi Washburn, in other words, does not see herself as poor. As far as Mary Delaney is concerned, neither should the community.

"We're only looking at people based on what they lack or don't have," said Delaney, executive director of the nonprofit organization Community Matters in Lower Price Hill and a friend of Washburn's. "When we isolate people just on their needs, we're not looking at them as whole people. We're looking at them as poor people."

Washburn and Delaney will be featured speakers at an event called Women Work: Making Communities Better Together. The event will take place from 11:30 a.m. to 1 p.m. May 11 at The Sanctuary in Lower Price Hill. WCPO Insider, Impact 100, The Women's Fund of the Greater Cincinnati Foundation and Community Matters are partnering on the event. Registration for the event is available until 5 p.m. May 9.

'I still made it through'

To understand Washburn, it's important to understand how she grew up. She has lived in Lower Price Hill her whole life. She attended Oyler School every year except kindergarten, when she went to the former Washington Park Elementary School in Over-the-Rhine.

She was the middle child with an older brother and a younger sister. She remembers roller skating on State Street and riding around on her scooter in the summer.

Washburn got pregnant with Haylee when she was 16 and had her baby when she was 17. Washburn's dad died two weeks later, a loss she still feels deeply.

"He was my rock and the glue for the whole family," Washburn said of her dad. "I had to deal with going back to school and raising the baby. I still made it through."

She did more than just make it. She was the salutatorian of her 2011 Oyler School graduating class. She earned an associate's degree at Cincinnati State and has been working at her job for almost three years.

It hasn't been easy. Washburn didn't always get along with her mom, and things "went down hill" after her dad died, she said. She and Haylee moved into their own place right before Washburn turned 20. She had to learn how to apply for her apartment and collect all the documents she needed to prove her income.

She has to recertify every year, and she's getting a little nervous about this year. She's paying $349 a month in rent, but all her overtime might mean she will have to pay more.

She no longer qualifies for food stamps, which are now called the Supplemental Nutrition Assistance Program. She makes too much for government-funded health insurance, although Haylee still qualifies.

But things are looking up. Washburn is working with Community Matters to get a renovated house through Habitat for Humanity.

Once she gets her house, she said, she and her fiancé and Haylee all will be able to live together with some room to grow their family.

"She wants a sibling. I might give her one," Washburn said of her daughter. "I'm just trying to plan for the future and see where it goes."

Washburn said she dreams of being able to afford more "fun things" for Haylee.

"She does ballet sometimes in the after-school program," Washburn said. "She likes to help Mary in the garden. She's always going outside to the park."

"Mary's my rock. Both of her co-workers are my rocks. I can always count on them," Washburn said.

Delaney counts on Washburn, too. Washburn was the one who inspired Community Matters to fund a community laundromat so residents of Lower Price Hill would have a place to wash their clothes closer to where they lived.

And while Washburn's story is typical of other single moms in so many ways, she stands apart because of her optimism, strength and total focus on her daughter that drive her decisions in life, Delaney said.

"She's the one that did all the work," Delaney said. "She made the choice every single day to continue to push forward even though it was difficult."

Like thousands of other moms across the region, Washburn still is pushing.

She knows that people judge her for having Haylee at such a young age. But she doesn't regret it.

She wants people to know that it's possible to bounce back from anything life throws at them.

"I'm still trying to bounce back from things here and there," she said. "One of the Community Matters people told me, 'Fake it 'til you make it.'"

But Delaney knows that Washburn doesn't have to fake the things that matter.

"Kimmi knows better than I do how to address the issues," she said. "Our neighbors know how to navigate and succeed."