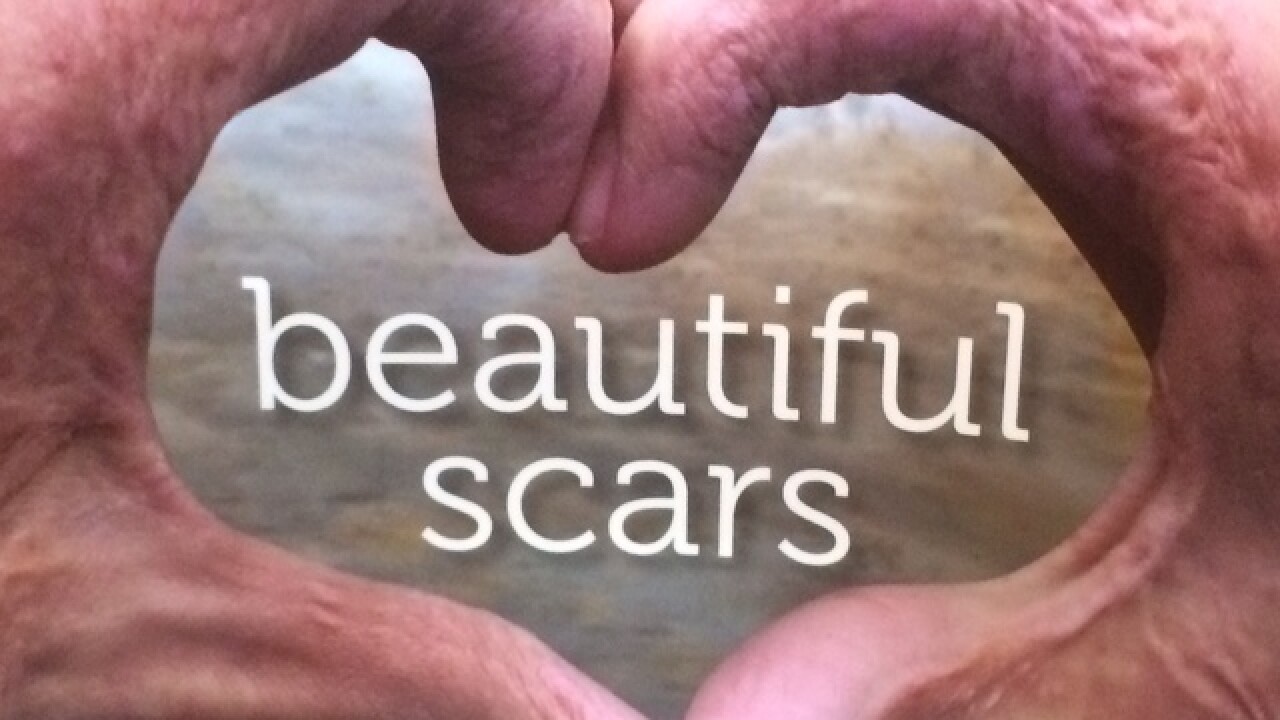 Tony Mirones | WCPO
<p>Kilee Brookbank holds her scarred hands in the shape of a heart — just like she did for the cover of her book "Beautiful Scars."</p> 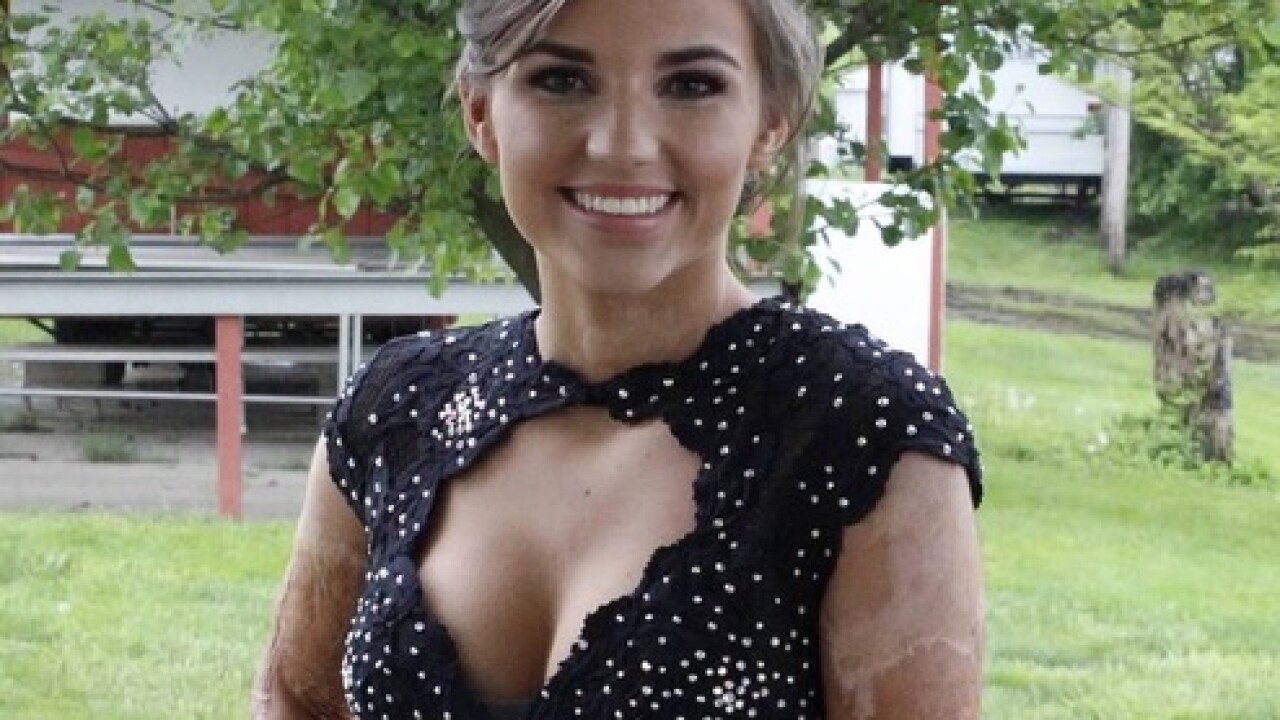 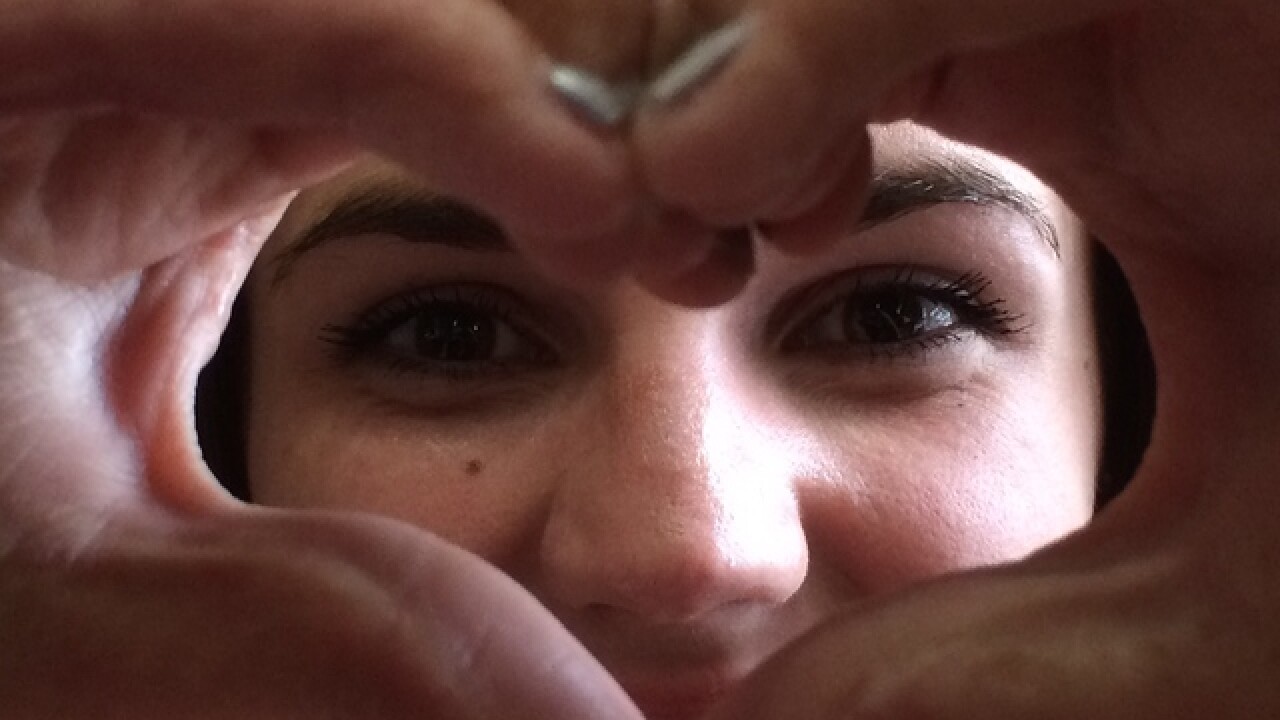 GEORGETOWN, Ohio — Kilee Brookbank smiled as she sat in her mom's Georgetown office, answering questions about her senior prom and college plans and final days of high school.

All she has to do, she said, is survive the last few weeks of physics.

That shouldn't be a problem. Kilee, 17, has survived much worse.

She was the only person home with her two dogs on a Monday afternoon in 2014 when she smelled a foul odor and lit a candle to try to get rid of it. An explosion in her Georgetown house — which investigators thought was possibly caused by a gas leak — knocked her to the floor. Kilee woke up to the frantic barks of Digger, her Chihuahua-Yorkie mix. Flames covered her arms, legs and back.

Kilee and her dogs got out of the house. But she was so badly burned that she had to stay at the Shriners Hospital for Children in Cincinnati for 38 days for a series of surgeries and skin grafts. Even after Kilee was well enough to leave, months of healing and painful physical therapy followed.

"Every day that I would wake up, I'd feel like this is never going to end. That I'm going to have to do this for the rest of my life," Kilee said of those awful days, weeks and months.

Now — a year and a half after the explosion — Kilee's skin has healed, her hair has grown back and her family lives in a new home built at the same address as the one where she almost died.

"People don't really see it on the outside," Kilee said. "They see scars, but they don't really understand what they're from or what they represent to me."

The scars have become part of Kilee's story, she said. It's a story she and her mom, Lori Highlander, tell in their new book, "Beautiful Scars."

Kilee and her mom spoke with WCPO during an exclusive interview to discuss the book, offer an update on Kilee's recovery and talk about how the explosion that burned 45 percent of Kilee's body changed her and her family in ways they never expected.

How Quickly Life Can Change

Georgetown is a close-knit place where it seems like just about everyone knows everyone else.

Ripley Union Lewis Huntington High School, where Kilee is a senior this year, has 300 students in all four grades. Kilee's graduating class has about 70 students.

So on Nov. 10, 2014, it didn't take long for word to spread about the explosion and Kilee's injuries.

"I was notified probably within an hour or so," said Susie Skinner, principal of Kilee's high school. "I kept in touch with people that were not family but were close to family throughout the evening. At that point, we didn't even know if she would survive the night."

Not a lot of teaching happened at school that next day, Skinner said. A substitute teacher who is a pastor at a local church held an assembly where all the high school students were invited to talk with him and ask questions.

"It wasn't faith-based," Skinner said. Students weren't required to go, but all of them did. "It really allowed all the kids in the building to talk about life and how quick it can change."

Kilee's friends and classmates mobilized right away to raise money for her family, who asked that it be donated to Shriners instead.

Long before Kilee was well enough to return to school, she was asking for homework and wondering how she would make up the tests she was missing.

Her first day back after the explosion was in January 2015, and her only special request was to be allowed to wear a hat, Skinner said.

"I made it free hat day for the next 10 days," Skinner said, so every student at the high school could wear a hat in support of Kilee.

Before long, Kilee's hair was long enough that Skinner suggested she didn't need the hat anymore, and Kilee agreed.

"She walked back in this building as a confident young woman," Skinner said. "She is fully at comfort in her own skin, literally. She's a stronger human being because of this."

Kilee had been back to school only a few weeks when her class voted for her to be a homecoming attendant. Skinner called Kilee's mom when she saw that Kilee's had a chance of winning in the vote to make sure Kilee would be comfortable walking onto the basketball court to accept the honor. She was.

That doesn't mean the rest of Kilee's junior year was easy.

She had lots of work to make up and continued to miss class for her many therapy appointments.

But by the end of junior year, she had maintained her status as a straight-A honor student. And she worked so intently at her therapies that she finished her rehabilitation three months ahead of schedule.

'Back On the Same Page'

Last summer and the start of Kilee's senior year offered her the fresh start she longed for.

"I was back on the same page as everybody else," she said.

Senior year has been packed with the tough classes, high school milestones and big decisions that so many teenagers face.

For Kilee, this year's homecoming was a chance to pick a dress that fit her personality without having to wear compression bandages under it. She chose a bright pink, sleeveless top and knee-length pleated skirt.

Her dress for prom was even more glamorous — floor-length, black, shimmery and sleeveless. Kilee didn't worry at all about the scars on her arms and whether they would show, her mom said.

The junior and senior classes rewarded her confidence and kindness by crowning her prom queen, an honor Kilee didn't announce on her Facebook page for fear of looking "conceited."

"It's remarkable," said Kilee's mom, Lori Highlander. "We say it was a miracle for her to be here today. Just watching her mature and grow into the young woman she has become has been really cool and neat."

But not everything this year has gone exactly the way Kilee hoped it would.

She applied to colleges in New York City and dreamed of spending the next four years there. But she didn't get accepted to New York University or Columbia University. She was disappointed, but still had options. Miami University of Ohio, Xavier University and University of Cincinnati all had sent Kilee letters of acceptance.

After working through her disappointment, Kilee decided that staying closer to home for college wasn't such a bad thing.

"I realized that I have so much that I would lose if I went that far away from home," Kilee wrote in a blog post.

She decided to attend Xavier University this fall and is looking forward to it, she said.

Kilee doesn't know yet exactly what her major will be.

"I'm still freaking out about it because I don't know what I want to do or what I want to be, and I feel like I should know," she said. "A bunch of my friends know."

In that way, Kilee is like any other teenager facing the next big step in life — worrying about college classes and majors and where all those decisions will take her.

But she's very different, too.

Kilee's injury and recovery have made her far more confident and outgoing than she used to be, said Loren Gast, Kilee's cousin and best friend.

"People probably get confused that she's such a happy person even though this happened to her," said Loren, who is a year older than Kilee and just finished her first year at Xavier. "She has kind of like made the best of it and uses it for good."

Kilee knows that dodging death the way she did makes her different from the typical teenager in Georgetown.

She has written a book, after all. She works for the Kilee Gives Back Foundation that she and her family started to raise money for Shriners in Cincinnati.

The drama that worries other high school seniors pales in comparison to the questions Kilee has had to ask herself since the explosion.

"Why me?" she remembers wondering during the most difficult parts of her recovery. "Why did this happen to me? And what did I do to deserve this?"

Kilee got past those questions after she realized she could get past her burns and found the answer that now drives her.

"I think I was meant to show other people how to handle situations like this or just to be kind of a person for them to look up to," she said.

Skinner, Kilee's high school principal, said she wouldn't be surprised if Kilee's college studies lead her to work with nonprofit organizations because of the passion she has developed for helping others. Kilee also would make a great counselor or social worker, she said.

"I can see big things happening for her," Skinner said. "This has opened doors for her in different areas that never would have occurred — writing a book, being on TV and national TV, hosting a charitable golf scramble last summer."

That golf scramble was a major fundraiser for Shriners, and the Kilee Gives Back Foundation raised more than $40,000 for the hospital through the event.

This summer, Kilee and her family will be busy helping to plan to next golf tournament. She also has book signings scheduled and will have all the chores that come with preparing for college.

It will be busy. But Kilee is confident she can handle it.

After what happened 18 months ago, Kilee and her family have come to realize she can handle just about anything.

Kilee and her mom will sign copies of "Beautiful Scars" at 6 p.m. May 18 at Shriners Hospitals for Children — Cincinnati.

The book is scheduled for release May 17. It's available for pre-order at KiCamProjects.com, and the e-book can be pre-ordered on Amazon.com for Kindle.

For more information about other book-signing events, click here.