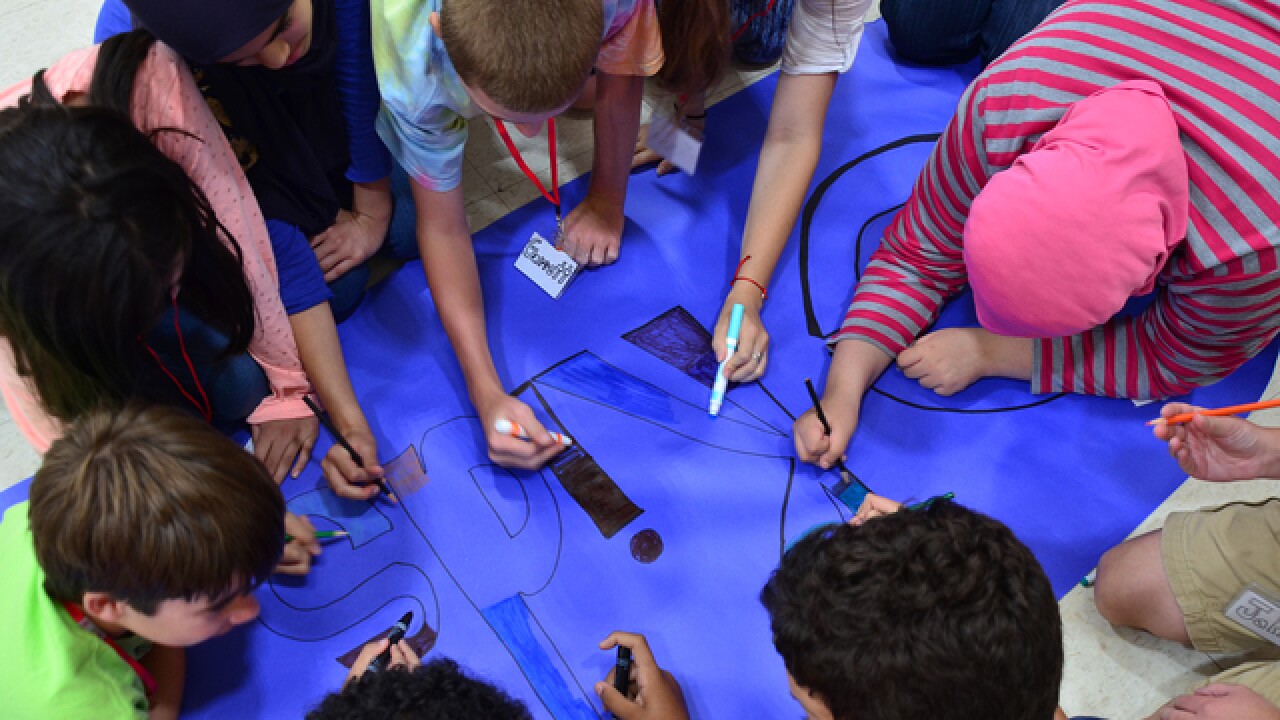 Copyright 2017 Scripps Media, Inc. All rights reserved. This material may not be published, broadcast, rewritten, or redistributed.
Contributed
<p>Participants in the 2016 Kids4Peace day camp in Cincinnati color a banner together.</p>

CINCINNATI -- It's the time of year when local churches host vacation Bible schools. These are typically one-week affairs, held for a few hours each day, in which kids learn more about their Christian faith.

For its school last month, the organizers invited the local chapter of Kids4Peace to make a short presentation.

Like local churches, Kids4Peace, a Jerusalem-based nonprofit, organizes summer events about religion for children. But kids at its camps don't just learn about Christianity. They also learn about the other Abrahamic religions, Judaism and Islam.

The Cincinnati chapter is one of only a handful in the United States, said chapter lead Judy Chamberlain, and was one of the first to offer a day camp.

The local chapter was invited to vacation Bible school to give the youngsters "a peak into other religions," said Judy Gardner, the director of children's spiritual formation at St. Timothy's.

Kids in Anderson Township are mostly white, she said, but they attend school with some Hispanic and Indian children. They often don't know about their fellow classmates' religious beliefs, she said.

Several members of St. Timothy's attended the initial Kids4Peace camp in Cincinnati last year, she said. The program itself began in 2002 in the Episcopal Diocese of Jerusalem with meetings between Israeli and Palestinian families.

That's where Chamberlain learned about it while on a trip to Israel with her parish, Christ Church Cathedral in Downtown Cincinnati. She learned how parents in Israel who wanted a better environment for their children brought them together and sent them to the United States for a camp experience.

It seemed to her if Kids4Peace could have an impact in Israel, it could also have one in the Tri-State.

"It seemed to me we had an increasing number of kids finding guns to settle their issues," she said. She wanted to offer them a better way.

When she returned home, she asked Kids4Peace to help her start a chapter here. She also talked with local religious leaders from hers and from other faiths to get their support.

Ten kids attended the first camp, said camp director Natalie Shribman. As of early July, 17 were registered to attend this year's camp, which is scheduled for July 31-Aug. 3.

Eleven of the registered campers are Christians, with the remainder evenly split among Muslims and Jews, Shribman said. Five are returning campers from last year.

One of them is Jack Fechter of Symmes Township. In an email he wrote with his mother, Earlene, he said that at camp last year, he learned that "we often judge people by how they look until we get to know them as a person." He also liked the fact that he learned directly from the other kids at the places of worship they visited.

"The kids could explain things, and taught each other," he wrote.

Another mother of a returning camper, a Silverton resident who asked that her name be withheld, said her son had a great time last year, learned a lot and made new friends. The program "has a special resonance this year, when the focus in the adult world is increasingly on highlighting divisions in religious and other areas of life," she said.

This year, the campers will spend the first day of camp at the Islamic Center of Greater Cincinnati in West Chester, the region's largest mosque. They'll spend the second day at St. Barnabus Episcopal Church in Montgomery and  the third at Adath Israel synagogue in Amberley Village.

They'll split the fourth day between the Clifton Mosque and Matthew 25: Ministries, a nonprofit Christian ministry.

At each house of worship, they'll learn more about what adherents believe, as well as some basic symbols of the faiths. They'll also have some bonding activities, in which they learn to trust people of other faiths, Shribman said.

The deadline to sign up for the camp is July 30. The cost is $150 per camper, Shribman said, but scholarships are available.

The day camp is for middle school students, who can remain a part of Kids4Peace until they are seniors in high school. Those who've completed the day camp can attend regional camps, where they meet their counterparts from Israel.

Chamberlain hopes to raise enough funds to have more activities throughout the year for the chapter members.

She had thought that the United States had made a lot of progress in terms of eliminating racism, she said, but lately she's seen that there's more prejudice out there than she knew about.

"We want to be able to encourage kids to make peace in their communities," Shribman said. "We hope that in the future, they will continue to be peace leaders and social activists."