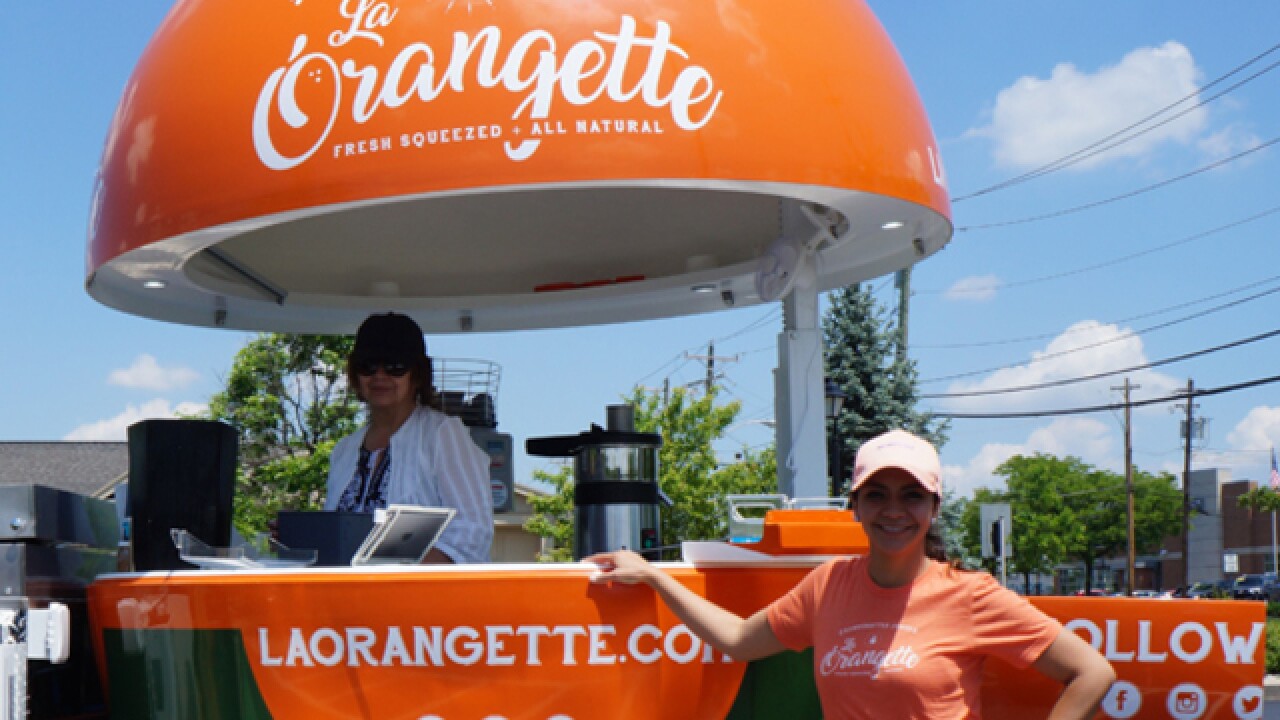 CINCINNATI -- If you spot a giant orange globe on the streets of Cincinnati this summer, don't be alarmed; that's just La Orangette , the city's first mobile juicery.

"It's neat to drive it around and see people's expressions as I'm going down the expressway -- 'What is that?' " said owner Tanith Smith.

La Orangette will offer about seven kinds of juices at festivals and farmers markets this summer, sold for $3-$5 per cup.

Smith conceived the idea in January after spending two months traveling around Mexico.

"I was born and raised in Mexico, and it's popular there to have fresh fruit juices on every corner," she said. "I wanted to show my kids my culture and where I grew up. When I came back, I really missed it. I wish I could go places where it's not just soda and tea. I want more for my kids.

"I thought, 'Hey, I'm going to make the juices happen and make it a mobile thing, so that everybody in Cincinnati can try it.' "

Until age 9, Smith lived in Juarez, Mexico, and then moved to El Paso, Texas. She attended college in Phoenix, but a job brought her to Cincinnati five years ago.

"Cincinnati is totally different from the Southwest," she said. "It feels like you can breathe better over here."

Smith ordered the Orangette from a company in Spain. She designed the graphics for the trailer bed, colorful pineapple and citrus images, and a company in West Chester worked with her to build the trailer.

Before she became a juice queen, Smith had a background in marketing, which helped in coming up with the name of the business.

"I wanted something that was cute and catchy and fruity but not too obvious," she said.

She taught herself how to juice, using her home Norwalk juicer.

"I started juicing everything, and it slowly became a lifestyle," she said.

She and her family spent the winter experimenting with different juice combinations and settled on about 15 different kinds of limonatas (lemonades), agua frescas and juices, such as the immune booster (orange, apple, lemon, ginger) and detox green (apple, celery, kale, lemon). Smith gave out free samples of her juices at the Queen City Brewery of Cincinnati -- her boyfriend, Mike Wofford, is a co-owner -- to get feedback.

"My whole family was trying different juices for months, to the point where they were like, 'Can we just drink water?' " Smith joked.

The Orangette made its debut May 13 at the Montgomery Farmers' Market . Smith said business was nonstop from open to close.

Most of the juices are made fresh to order on the Orangette.

"I think juicing is probably one of the best things you can do," Smith said. "You don't get enough of the nutrients that you're supposed to get even if you're eating what you're supposed to from your food groups. For example, the detox green juice -- you're getting seven servings of fruits and vegetables in one cup."

Except for the lemonades, she doesn't add any sugar, and her slogan is: "Squeeze what ya mama (nature) gave ya."

Smith and her family will spend now until the end of September traveling around Cincinnati and Northern Kentucky with La Orangette. They've booked the Blue Ash Farmers Market May 24 and the Covington Farmers' Market May 27, as well as Hocking Hills' Hippie Fest July 22 and Charm at the Farm , a vintage market in Lebanon, June 4 and Aug. 26-27. (Click here for a full list of events where La Orangette will be.)

The menus will change from venue to venue, depending what's in season. When cooler temps arrive, she'll pack up La Orangette for the winter and likely will return to her second job as an artist.

Smith said she has considered developing "little Orangettes all over town" and opening a storefront.

"We can't take (the vehicle) too far, because we have to take good care of it and make sure it's nice and shiny and not beat up," she said. "It's hard work, but it's a labor of love."