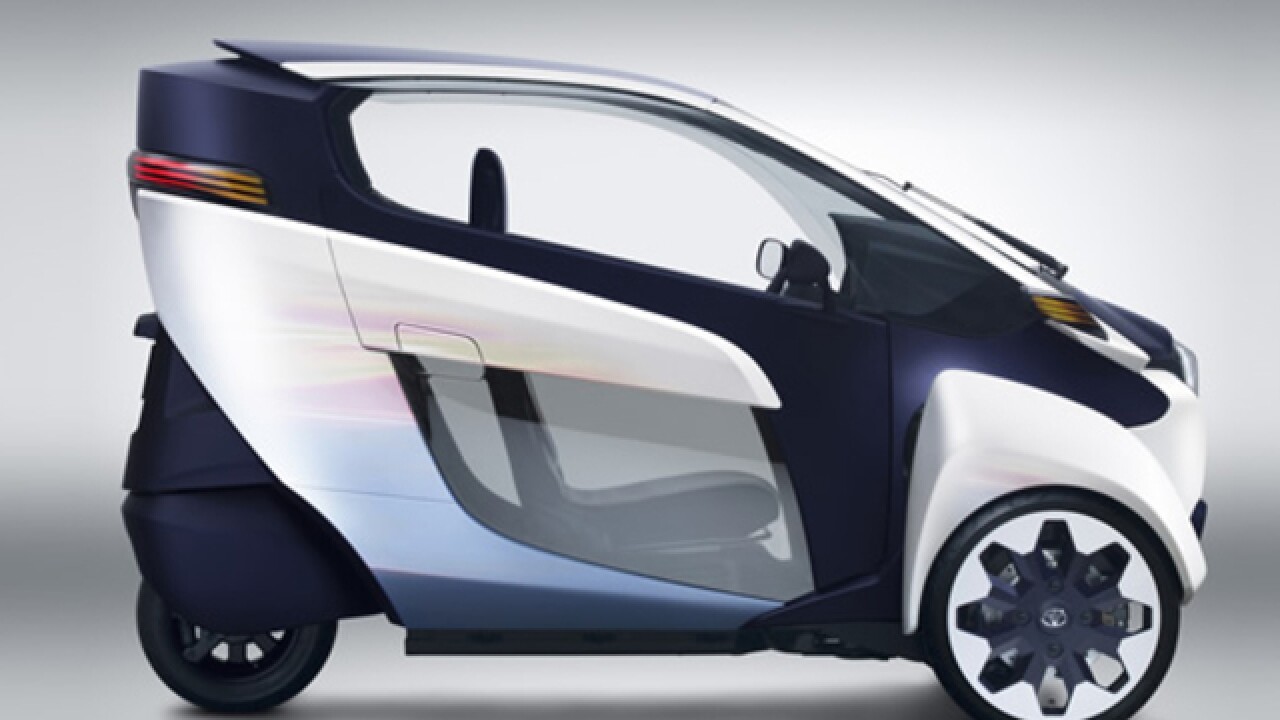 Copyright 2017 Scripps Media, Inc. All rights reserved. This material may not be published, broadcast, rewritten, or redistributed.
Provided
<p>The Toyota <span data-scayt_word="iRoad" data-scaytid="4">iRoad</span> is a three-wheel vehicle being tested in Japan. It's only a two-seater, but it's all-electric, and about four of the <span data-scayt_word="iRoads" data-scaytid="5">iRoads</span> will fit in a single parking spot. (Photo provided by Toyota)</p> 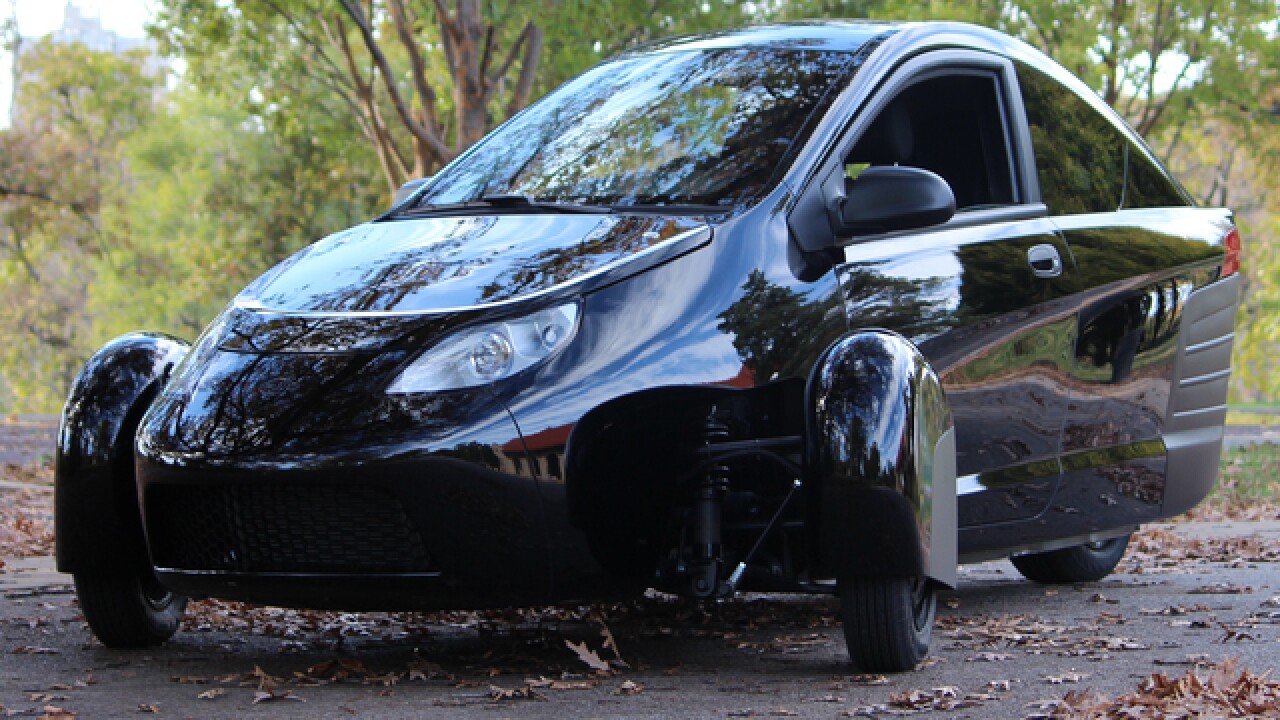 Don't be surprised if you see a three-wheeled autocycle, a UPS golf cart or a military-issued yet privately owned Humvee on Kentucky roads in the coming year.

That is, unless you've already seen one.

With the exception of the privately owned military Humvee, which became legal this month, autocycles and golf carts have both been allowed on state roads. The new laws, which go into effect this week (end of June), cover licensing, insurance and commercial use that could increase the number of these kinds of vehicles on the roads.

Autocycles are slowly but surely gaining popularity across the U.S., but they've been popular in Japan and Europe for a while.

Previously classified as motorcycles in Kentucky, autocycles are really more -- or at least different -- than that. They're enclosed, three-wheel vehicles that seat one to four passengers, depending on the manufacturer. Some brands appear to have one wheel in the back, and others use it as the lead wheel.

"We're really just getting statutes to reflect some of the new vehicles out there," said Huber, who lives in Florence. The autocycles are more like a car and need to be treated more like a car on the road.

Think helmets -- not needed in a car but required in some states for motorcycles. Kentucky only requires helmets for motorcylists under 21.

The law, Senate Bill 73, now clarifies an autocycle as a motorcycle, which matches federal laws. It also requires at least one door, a three-point seatbelt, a steering wheel and a top speed of 40 mph. And, like a car, insurance information must be carried inside.

But autocycle owners won't have to get a motorcycle license, and helmets aren't required for any age -- just a license.

The fun part is the autocycles themselves. Several small companies are making them, or planning to.

Elio Motors is one of those companies. It hopes to launch its three-wheel Elio Motors E1C in late 2018.

Elio's spokesperson, Mike DeVilling, said the car will be built in Shreveport, Louisiana. It's expected to get 84 miles per gallon with a less than $8,000 price tag. Elio has orders for 65,000 vehicles, but is still working on funding, DeVilling said.

The more likely autocycle to hit the U.S. in a big way is the electric Toyota iRoad, which is currently being tested in Japan and other markets, It's been shown in the U.S. in the last few years, most recently at the Chicago Auto Show this past winter. In Japan, it comes in multiple colors.

These are tiny, zippy cars -- think a very pared-down Smart Car – which are, at least the electric ones, only good for commuting.

And then there's the UPS golf cart

Later this year, you might see UPS drivers in golf carts instead of big brown trucks heading into subdivisions and neighborhoods with tight streets.

UPS got the backing of Rep. Sal Santoro of Florence to sponsor House Bill 404, which lets big delivery companies like UPS, FedEx and Amazon use this smaller form of transportation for deliveries. Small businesses aren't included.

Although the slower-moving golf carts are already allowed on some roads, this licenses the carts for commercial use and requires that commercial insurance be on file with the state. The carts can't go faster than 35 mph, and a UPS press release says the gas mileage (20 mpg) is an improvement over the trucks.

Boone County allowed the vehicles in a couple of neighborhoods last Christmas, but with the new licensing, the number is expected to grow. UPS also has used the carts in Bowling Green and Clark County, said Santoro. The carts are especially great on tight streets.

But Teamster Local 89 out of Louisville fought the use of the carts, listing safety and weather issues for the drivers.

James DeWeese, Teamsters Local 89 representative for UPS, said a golf cart doesn't protect employees from injuries in a car accident. He also said the cart service was started in places like Florida, where the weather was frequently nice.

"People aren't used to seeing golf carts on the road," he said.

Another issue is the salaries. Companies can clearly save money, said DeWeese, at the expense of the drivers.

Cities and counties can opt out of allowing the service, however, Santoro said.

And UPS drivers can opt out in bad weather, he added.

"One of the nice things about this is that UPS places a POD on a church parking lot or in a subdivision and pays the church or homeowners' association for the spot," he said. Packages are delivered to the POD, where they are retrieved by golf cart drivers.

The new licensing will be available for the holiday season, so you may start seeing UPS golf carts in your neighborhood by then.

UPS sent the following statement regarding its vehicles:

Increases in consumer demand driven by eCommerce are dictating that UPS adopt faster, more efficient ways to make home deliveries. In suburban areas in Georgia, Florida, South Carolina and other southern states, UPS has turned to golf carts in recent years to expedite the delivery process.

We began using golf carts in Kentucky in 2015, when we put 61 on the road in residential areas with speed limits under 35 MPH. The pilot went so well, we doubled our Bluegrass usage to 111 in 2016, all without any safety incidents.

Safety is always first at UPS, and we believe our golf carts are just as safe as our package cars. Every driver goes through OSHA's Powered Industrial Truck Operator training and rigorous golf cart driver training. In addition, the carts meet DOT slow-moving vehicle standards. Also, we set up the drivers' workflow to provide for human needs, such as bathroom breaks and relief from cold temperatures.

The carts have environmental benefits, as well: reduced noise, lower fuel consumption and fewer emissions than a standard delivery vehicle.

For all localities with golf carts in use, UPS has obtained the required permits. This brings us to the Kentucky legislation. The bill that was passed simplifies a cumbersome process for securing usage of golf carts. The new legislation allows for statewide usage, unless a city or county passes an ordinance banning them in their community.

The Teamsters have opposed this legislation, but the reality is, UPS is not trying to replace package cars with golf carts. This is about providing our customers with greater flexibility, speed, and capacity. In fact, we are supplementing our existing workforce during our busy holiday season by using golf carts. It's also important to understand that golf cart drivers are Teamster employees, just like our package car drivers and package handlers.

UPS receives positive feedback from customers and employees regarding golf cart deliveries within the communities where we use them, and UPS is law-abiding and respectful to the communities we serve.

They've been legal for law enforcement, but Kentucky has officially made privately owned military-grade Humvees legal.

SB 176 allows Humvees and other demilitarized vehicles to use public roads with the proper license.

The Pentagon started auctioning off the vehicles to the public in 2014, and while your neighbor might not have one (yet), this makes using one so much easier.

We couldn't find one in Northern Kentucky, but there are plenty for sale on the web ranging in price from $5,000 to $40,000. License plates were available starting July 1.