Just Hire Me: New company aims to tackle teen poverty one job at a time

Founder aims to change 'the mindset' 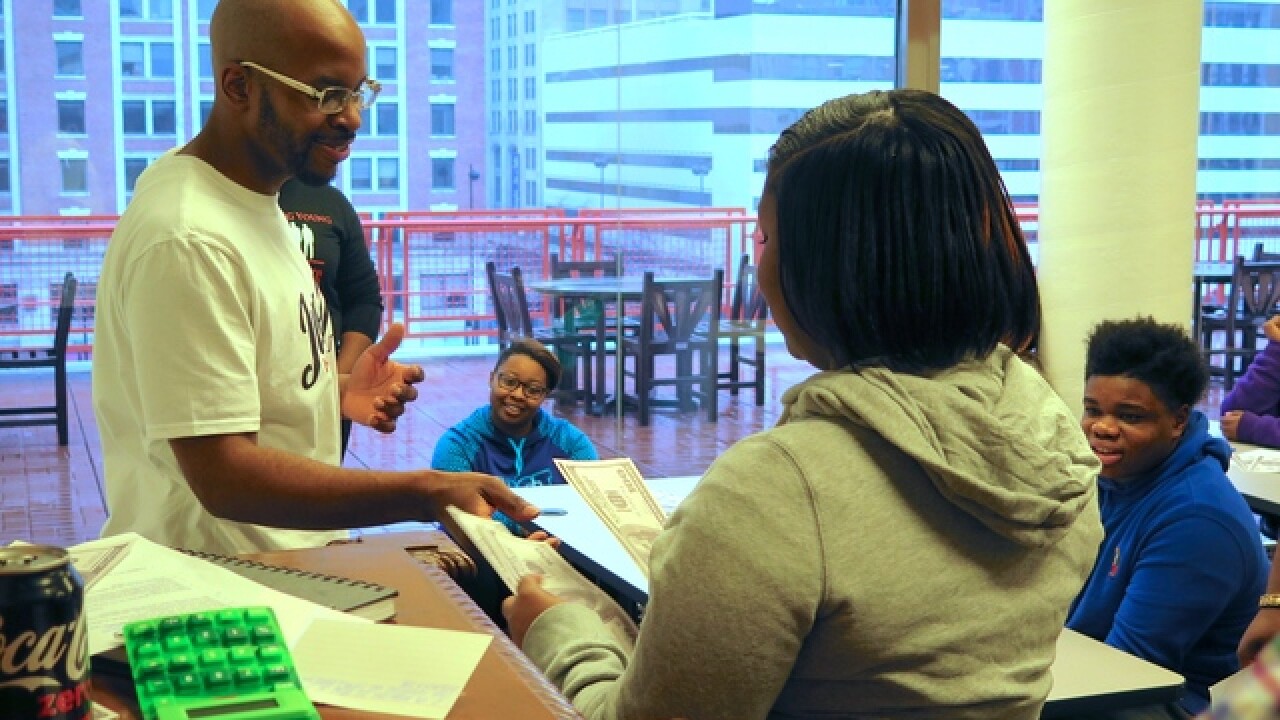 Copyright 2017 Scripps Media, Inc. All rights reserved. This material may not be published, broadcast, rewritten, or redistributed.
Lucy May | WCPO
<p>Just Hire Me founder Lawrence Jones, left, takes fake money from a teen during a role-playing exercise.</p> 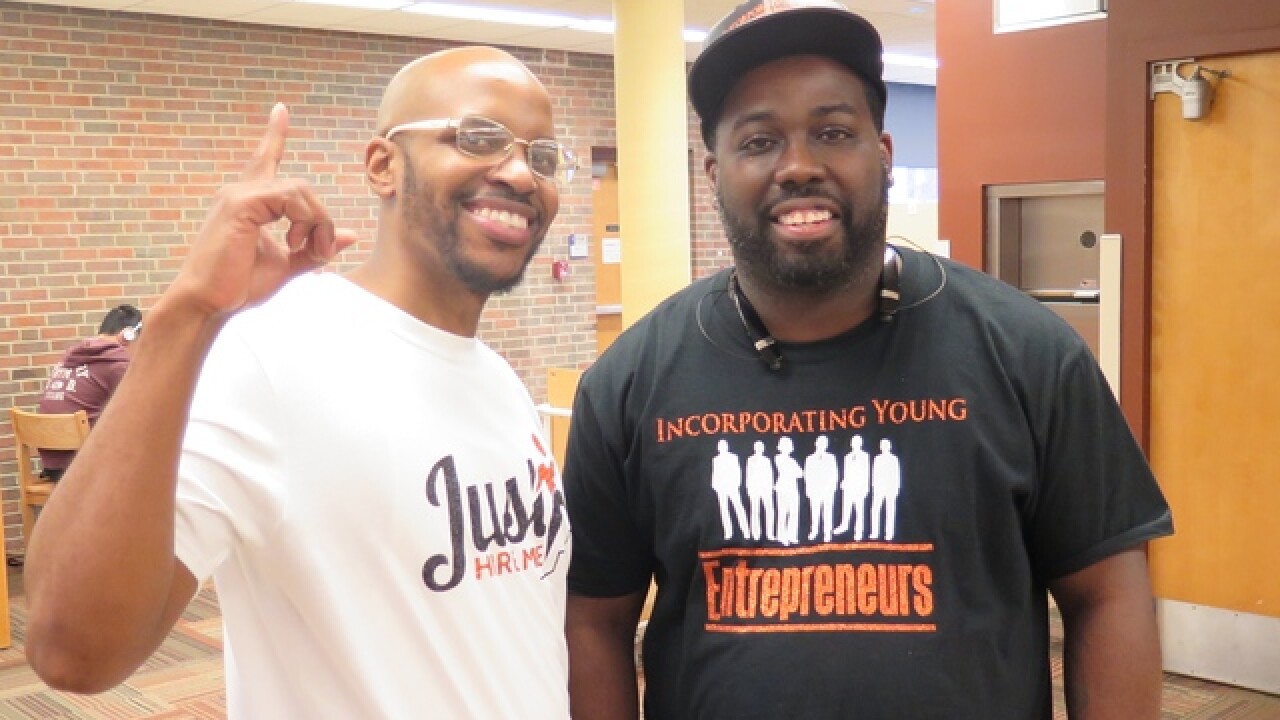 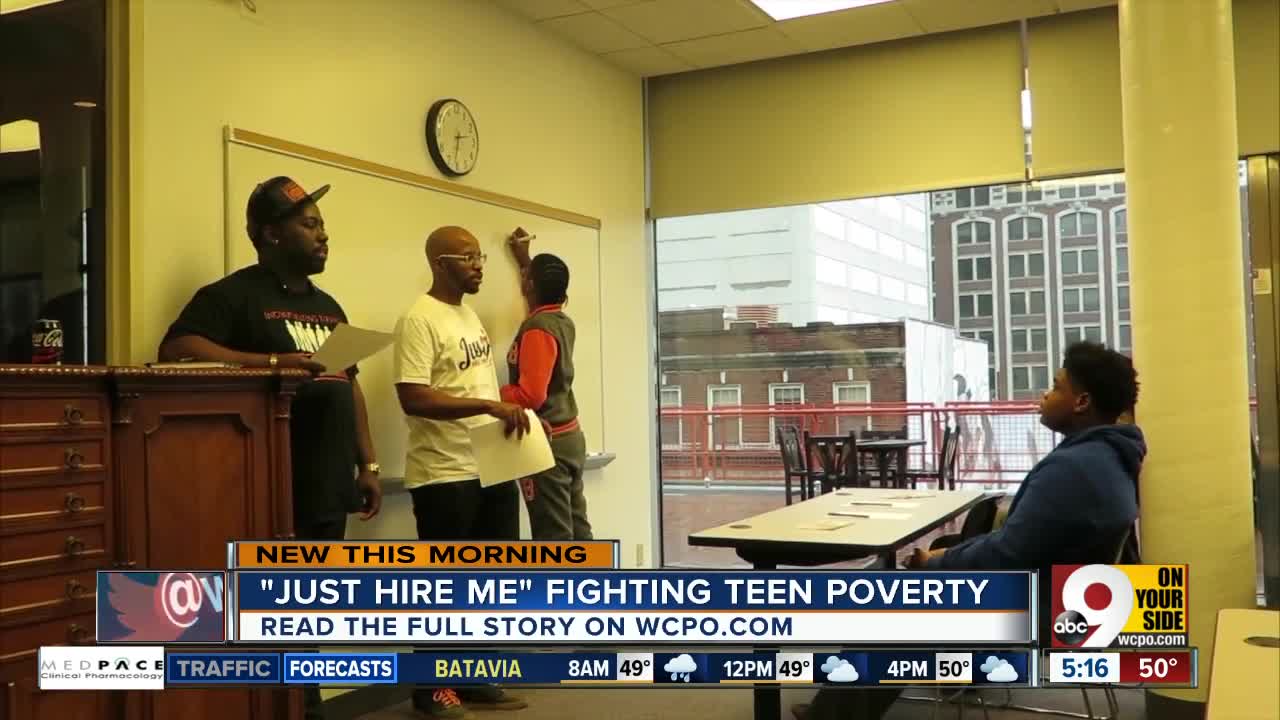 CINCINNATI -- At 16, Dy'Vontia Blackmon wants to be more independent. And he figures the first step is to earn his own money.

That's why he has spent the past three weekends in training for a new company called Just Hire Me, a temporary staffing agency for young people between the ages of 14 and 18.

"I know I need a job," said Dy'Vontia, a sophomore at Withrow University High School. "I want to be able to do stuff that I want to do without having to ask my parents."

Just Hire Me welcomes teens like Dy'Vontia who want to work for spending money. But company founder Lawrence Jones, who is Dy'Vontia's uncle, was inspired to start the business to help a different population: Teens living in poverty.

"There are millions of kids all over the world who are in poverty," Jones said. "The goal is to disrupt that and sort of get the community to bootstrap their way up."

Just Hire Me aims to match teen workers with neighbors or nearby businesses that want to hire them for small jobs or light chores. The neighbors and businesses fill out forms on the Just Hire Me website to explain what they need to have done. Teens that have gone through the company's training fill out online forms to explain their skills and availability.

Customers pay a flat rate of $15 per hour. The teens get paid minimum wage and the balance covers the company's overhead, such as training, payroll and insurance costs.

Jones likens the business to a program called "Rent a Kid" that was popular in the community but stopped operating when funding dried up, he said.

"My idea was, I don't want to reinvent the wheel," Jones said. "But I thought, 'How can I start connecting these teens to help out these neighborhoods and do these odd jobs?'"

Jones launched Just Hire Me as a for-profit business -- instead of a nonprofit program -- so he would not have to rely on grant money to keep it going, he said.

He began working on the business in 2015. Jones graduated from the Mortar entrepreneurship program last April and was one of the first graduates of the new Founder Institute Cincinnati chapter earlier this month.

Jones was one of them. He showed up to every class and always sat in front, ready to participate, Hiles said.

"Lawrence is very passionate about the problem that he's attempting to solve," he said. "It's that passion and understand of his community that's going to lend itself to his success."

Jones also knows how to hustle. He started making money as a teenager himself while growing up in Avondale. Back then he and his friend, Immanuel Lee, organized parties for other teens and charged a cover fee at the door.

He operated a nonprofit to encourage young entrepreneurs years ago. He also owns his own carpet cleaning business.

He has thrown his time and energy into Just Hire Me because of the need for the business and the potential he believes it has, he said.

"You have to have programs like this to say, hey, how can we get a 14-year-old out of poverty? How can we get that mindset to change? How can we put money in their hands," Jones said. "Twenty or thirty or forty dollars is going to go a long way with a teenager. We can help those that want to participate in the program and are willing to be helped. And that's what we think we're doing."

Lee is once again teamed up with Jones. Now the director of a nonprofit called Incorporating Young Entrepreneurs, Lee worked with Jones to design and provide the job readiness training that teenagers must complete to be part of Just Hire Me.

Learning the value of hard work

During the second training workshop, the two men had the teens role play with fake money to get a better sense for how much things cost and how much their parents have to earn and juggle to cover the basics of rent, utilities and food.

They also had the students break up into three groups, with one group trying to sell a product, one group acting as buyers for the product and the third serving as judges to determine which group did better.

The sellers tried, but the buyers asked lots of questions and wouldn't buy any of the products. The judges were harsh and decided neither the sellers nor buyers deserved to win because neither group had done a good enough job.

The lesson: Business can be tough, and success requires hard work and effort every day.

But as demanding as the world of work can be, Jones is confident that the teens of Just Hire Me will be the kind of workers that their neighbors and local business want to employ.

Jones tested the concept with a pilot program of 20 young people over the summer in his own neighborhood of North Fairmount.

"The neighbors really enjoyed it," he said. "They helped out with odd jobs at homes and just cleaning up the different streets."

As more teens get work through Just Hire Me and begin to experience success, Lee said he expects the company will impact the community in other ways, too.

"I think it's going to put a big curb in the violence that we see here," he said.

That's in part because Jones requires his young employees to think about their futures. Every teen that works for Just Hire Me will have a bank account and also will establish a long-term savings account, Jones said.

"The teens I'm targeting are not being taught financial literacy," he said. "People are really interested in making sure the teens understand finances early on."

Jones, in fact, has gotten interest and support from a variety of businesses and community groups since he began work to launch Just Hire Me, said Eric Fulkert, CEO of a company called Campus Suite and one of Jones' mentors.

Jones has found a partner to handle human resources and payroll functions for Just Hire Me, for example, Fulkert said, and that should be a big help to the company.

"People forget about HR," Fulkert said. "It's a huge beast on your back when you have employees."

The biggest challenge for Jones, Fulkert said, will be the regulations that surround hiring young people, insuring them and keeping them safe.

But Jones has demonstrated the determination that entrepreneurs need to overcome challenges, said Allen Woods, a founding partner of Mortar.

"He's driven, and he wants to get where he's going with Just Hire Me," Woods said. "And there's nothing or nobody that's going to get in his way."

Jones is such a believer in Just Hire Me that his own son is part of the first group of teen employees.

Lawrence Jones III, 16, is a junior at Roger Bacon High School. He has watched his dad work hard to create Just Hire Me, and he wants to work hard and be successful, too.

Lawrence plans to save money for college, and he likes the idea of a retirement account. But he has a more immediate financial goal, too.

More information about Just Hire Me is available online.