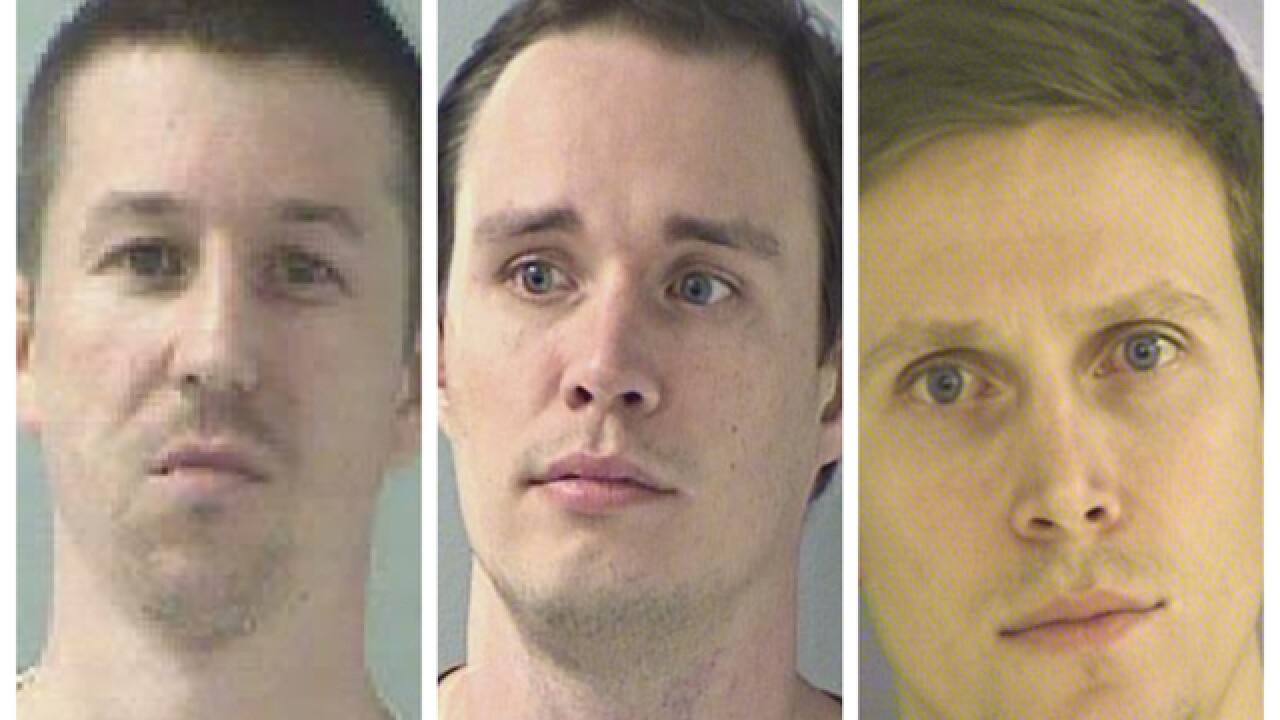 Copyright 2018 Scripps Media, Inc. All rights reserved. This material may not be published, broadcast, rewritten, or redistributed.
<p>Roman Iakovlev, Andrey Shuklin, and Vladimir Pestereanu are being held in the Butler County Jail on a federal racketeering charge for an alleged moving company scam. </p>

CINCINNATI - A federal judge may open six warehouses located across the nation – including one in West Chester – so that 163 victims of an alleged moving company scam can retrieve household belongings.

Federal prosecutors filed a motion on Tuesday asking U.S. District Judge Tim Black to lift a restraining order and allow them to return furniture and belongings to desperate families.

Black is likely to issue an order this week which would allow U.S. Department of Transportation agents to open warehouses in Illinois, Maryland, North Carolina, Connecticut and Ohio and return the belongings. The warehouse on Duff Drive in West Chester is housing the belongings of 32 customers.

“Agents believe that by working with customers and reviewing documents currently in the government’s possession they will be able to identify most if not all of the customer goods in the warehouses,” the motion states.

A federal grand jury charged 12 people tied to a nationwide moving company scam – including six who have not yet been arrested.

“This enterprise scammed people throughout the nation,” U.S. Attorney Ben Glassman said at a July 31 news conference announcing the indictment.

Moving company employees gave customers low estimates, but then bumped up the prices after they had loaded goods onto their trucks. They then held the property “hostage” and stole goods if the customers refused to pay, according to a federal news release detailing a scheme that spanned 10 states and began in 2013.

In order to draw customers, they lied about how long the companies had existed, claiming years of experience when they’d been founded just months earlier. They also created fake online reviews, officials said.

Some customer loads were never delivered. The scammed customers filed complaints and officials pulled the companies’ licenses. But the conspirators stayed a step ahead by forming new companies and hiding the identities of true owners in order to get new licenses, Glassman said.

The connected companies include:

The companies operated out of a business address in Hollywood, Florida.

Authorities arrested Andrey Shulkin, 31, of Miami; Phyllis Ricci Quincoces, 51, of Hollywood, Florida; Vladimir Pestereanu, 28, of Sunny Isles Beach, Florida; Roman Iakovlev, 31, of Charlotte, North Carolina; and Jessica Martin, 28, of Tamarac, Florida. Serghei Verlan is also charged in the indictment, along with six others whose names have been redacted because they have not yet been arrested.

On Tuesday attorneys for Iakovlev filed a motion asking a judge to release him from jail so he could live in Charlotte with his wife and daughter, who just moved there from Russia in July. He would also be willing to live in Cincinnati and receive electronic monitoring.

Iakolvev has no prior criminal record and is a legal immigrant from Russia, his attorney, Ed McTigue, wrote in the court motion.

"It should be noted that (Iakolvev) arrived in the United States in January 2015, after many of the moving enterprises referenced in the indictment were even created. He obviously had nothing to do with the creation of those entities," McTigue wrote in the motion. "It is not known what evidence the government has related to Mr. Iakovlev, but it is believed that any participation he may have had was very limited."

Glassman said investigators have identified more than 900 victims of the scam so far. He asked anyone who believes they may also be a victim to call 1-800-424-9071 or email hotline@oig.dot.gov.