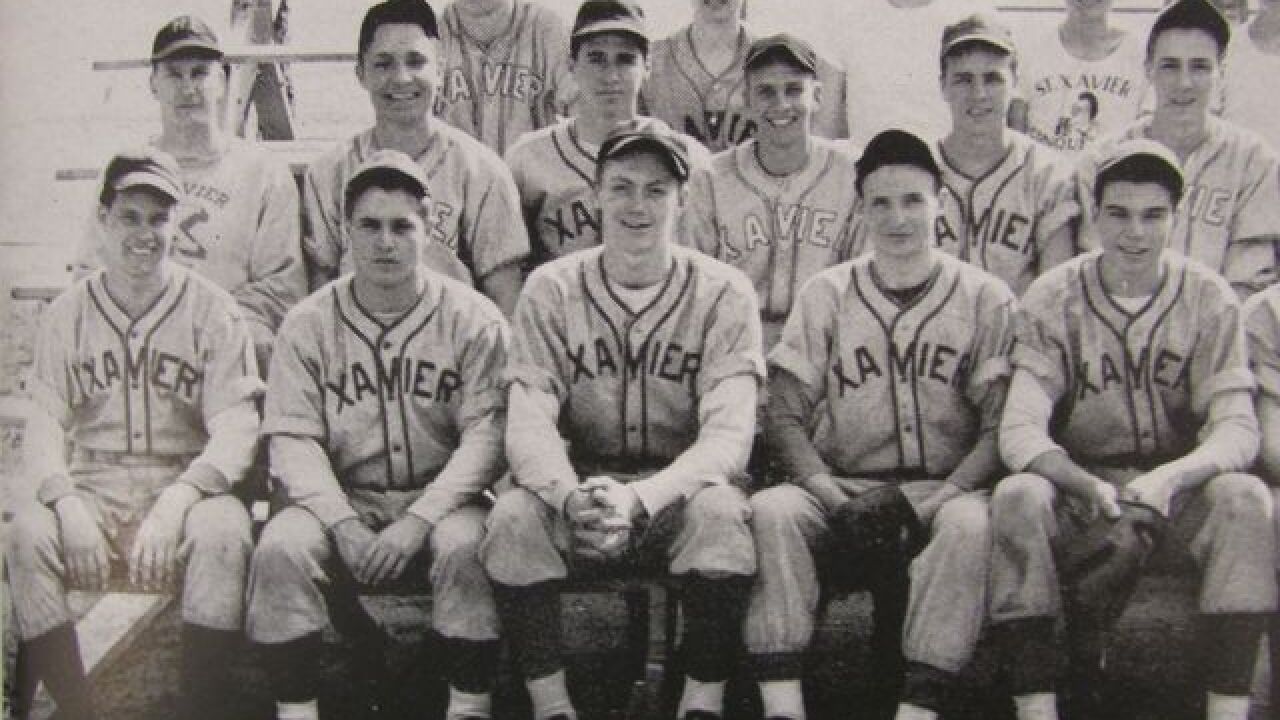 NEWPORT, Ky. — Jim Bunning remembers listening to the 1956 All-Star Game on the radio in Charleston, West Virginia, and wondering if he was ever going to get to play in the major leagues, much less on such a big stage.

The Northern Kentucky native was pitching for the Charleston Senators, a Class AA team. It was Bunning's sixth year in the minor leagues — a lifetime for a ballplayer — and his window for getting to the bigs was closing.

The Detroit Tigers rookie was on the American League All-Star team at Busch Stadium in St. Louis, shagging balls in right field an hour before the game, not expecting to play.

Yankees manager Casey Stengel sent his pitching coach to get him.

"Here comes Jim Turner and he says, 'What are you doing out here?'" Bunning told WCPO in a recent interview.

"He said, 'You're the starting pitcher.'"

WATCH: Jim Bunning talks about his baseball career with WCPO's Chris Riva and Greg Noble in 2015:

Bunning stopped himself for a moment to laugh. Stengel had not told him, he said. After the game, the wise old Yankee said he didn't want to make Bunning nervous.

"Then I go in to the bench and they call Curt Simmons (the National League starter) to home plate and they take a picture," said Bunning.

Just like that, the 24-year-old calmly took the mound and mowed down nine straight National Leaguers in three innings, including Hank Aaron, Stan Musial and Frank Robinson. He struck out Willie Mays looking.

And that was the beginning of one of the most impressive lifetime records in the All-Star Game, not to mention a Hall of Fame career.

Most baseball fans know about Bunning's perfect game, his other no-hitter, more than 100 wins in each league, the most strikeouts of any pitcher in his era and — the pinnacle — a plaque in Cooperstown.

But they might not know that the sidewinding right-hander from Southgate — who had grown up pitching for St. Therese parish, St. Xavier High School and Xavier University — had one of the best pitching records in All-Star Game history.

And yes, we're talking about the same Jim Bunning who became a U.S. congressman and senator.

"The perfect three innings is the thing I'm most proud of in the All-Star Game. Nobody had ever done that and I did it twice — in St. Louis and Boston (1961)," said Bunning, now 83.

But they didn't start picking an All-Star Game MVP until 1962 or Bunning might have won it twice.

Bunning actually had five perfect All-Star innings in 1961, retiring 15 straight batters. From 1959 to 1962, Baseball played two All-Star Games each summer. In the first game in '61, in San Francisco, Bunning relieved and set down six straight over two innings.

The nine-time All-Star pitched in a total of eight All-Star Games and started four. He had a sparkling 1.00 ERA with 13 strikeouts in 18 innings, giving up just three runs (two earned) and seven hits.

He might have pitched in two more All-Star Games after he was traded to the Phillies, but he passed rather than skip a start when his team was in the pennant race, Bunning said.

"Of course I'd rather get a win in the National League when we're battling for the pennant than go to the All-Star Game and sit on the bench," he said.

Bunning got his first All-Star start when Yankees great Whitey Ford was hurt and couldn't go, but that doesn't make it any less impressive.

"It was like night and day going from Charleston the year before. But I was 10-2 at the All-Star break, so they had to take me," Bunning remembered. "It was kind of scary to do it that fast after it took so long to get there."

It wasn't a miracle or angels in the outfield that got Bunning to the big leagues and made him an instant success. It was a slider.

Bunning had run into some bumps in the minors with the Tigers organization. The great Hall of Fame pitcher, Schoolboy Rowe, was the Tigers pitching coach, and he tried to change Bunning's delivery from sidearm to overhand. Bunning had two late-summer call-ups to the Tigers, but manager Bucky Harris used him as a reliever instead of a starter, and Bunning didn't like that, either.

After the 1956 season, Bunning had run out of options with the Tigers. If he didn't make the team the next spring, they had to release him. So when Bunning was asked to play winter ball in Cuba, he said he jumped at the chance.

"Cuba was the best winter league and I ran into a pitching coach by the name of Connie Marrero. He showed me how to throw a slider," Bunning said.

It was a "total, complete" transformation, Bunning said. The slider, which bent away from left-handed hitters when thrown by a right-hander, enabled him to get left-handers out and completed his repertoire, he said.

He went 13-4 in Cuba and when he got to spring training, the Tigers had a new manager, Jack Tighe, who had managed Bunning in the minors.

"He kept me in the bullpen about four weeks and then gave me a start against the Red Sox in Fenway Park, and I beat them 2-1." Bunning said.

The rookie went 20-8 and established himself as a big-league starter.

"Because I had that slider," he said.

A year later, Bunning came back to Fenway on July 20, 1958, and pitched a no-hitter, retiring the great Ted Williams four times.

"The only time I ever got Ted Williams out four times. Four pop-ups," Bunning said.

On June 21, 1964, Bunning pitched a perfect game against the Mets in Shea Stadium. It was Father's Day, and his wife and oldest daughter were there to see it.

"A perfect game is a freaky thing," Bunning said. "There were two balls that were normally base hits in that game that two of my infielders just made spectacular plays. Jesse Gonder hit the only changeup I threw all day, directly in the hole at second base. Tony Taylor, my second baseman, dove at the ball and knocked it down. And he threw Gonder out — and you know Gonder ran like molasses — in a (bang-bang) play at first base. Tony was still on his knees throwing the ball.

"And Dick Allen made a play at third base in the hole. It looked like a routine play because he just went over and picked it. Charlie Smith hit it. But it was a tough play.

His biggest disappointment was never making the World Series. In 1964, the Phillies blew a 6 ½-game lead in the last two weeks.

The Reds started the Phillies on a 10-game losing streak by sweeping three games in Philadelphia starting on Sept. 21. With one game left, the top of the standings looked like this:

All it would take to have a three-way tie would be a Phillies' win and a Cardinals' loss.

Bunning did his part. He shut out the Reds, 10-0, giving up just six hits and striking out five.

But the Cardinals beat the Mets, 11-5, and won the pennant by one game over both the Phillies and Reds.

It was a terrible blow to Bunning and the Phillies — as well as the Reds.

"The fact that you never got to the World Series is the biggest, most important thing," said Bunning, who finished that year with a 19-8 record and 2.63 ERA.

The Reds had hoped to give their beloved manager, Fred Hutchinson, another pennant before he died. Hutchinson had cancer and had left the club in August, turning it over to coach Dick Sisler. Hutch died that November. His retired No. 1 hangs today in Great American Ball Park.

At his Hall of Fame induction in 1996, Bunning gave a poignant speech thanking his family and managers and coaches — starting with his very first days in Southgate to Knothole in Bellevue to St. X and the local amateur leagues to XU and then the pros.

VIDEO: Watch Bunning's Hall of Fame speech in the player below

"Thanks to all the other heroes like all the managers and coaches of my early Knothole teams at the Bellevue Vets Knothole Field in Bellevue, Kentucky."

"I thank Bob Davis and Bonny Washer for their help and guidance. They were my coaches at St. Xavier High School in Cincinnati and they taught me the fundamentals.

"Thanks to Ed Neltner, Bob Zimmerman, Joe Heekin, Nolan Cruse, Bud Conners, Red Brown, my coaches and managers in the Holy Name League, and Buckeye Leagues and everyone else who helped with those teams. These folks took a skinny little guy and taught him to love the game and how to play it."

Of course, Bunning — nothing if not a family man — thanked his wife and children most of all.

"I owe a very, very special thanks to my wife Mary, the mother of our nine children, my childhood sweetheart from the fourth grade. We lived through the good times and the not-so good times. Mary was my rock and she prayed me to more wins than I ever thought I was capable of winning in the minor leagues, in the major leagues, and in life. She was my best fan and my best friend.

"Kids, I thank you for the understanding all the times I missed something you thought was important; a dance, a first date, a football, basketball, baseball game, a birthday, a prom. Your first driving lesson or even your graduation. Mom was always there, but I missed a lot of those special days. I hope you know I loved you then, and I hope you know I love you now."