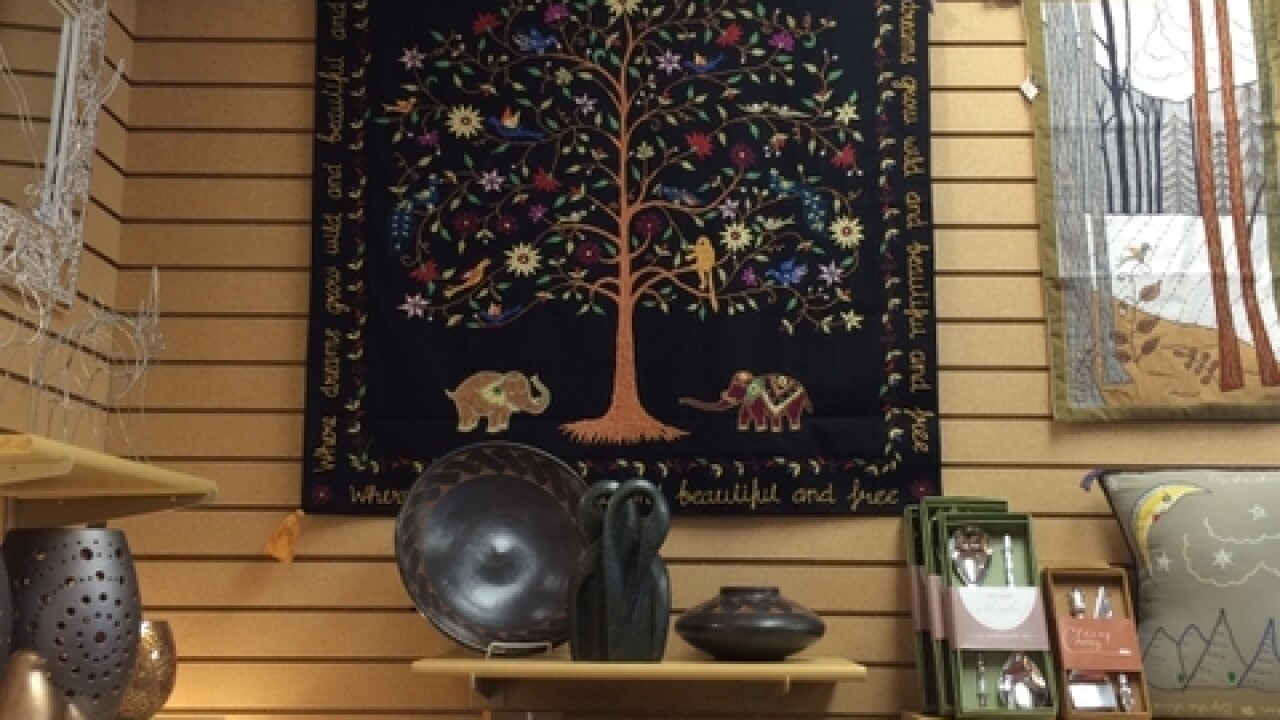 Sonia Chopra/WCPO contributor
<p>Wall art from Pakistan, where elephants are a popular motif, is on display at Ten Thousand Villages.</p> 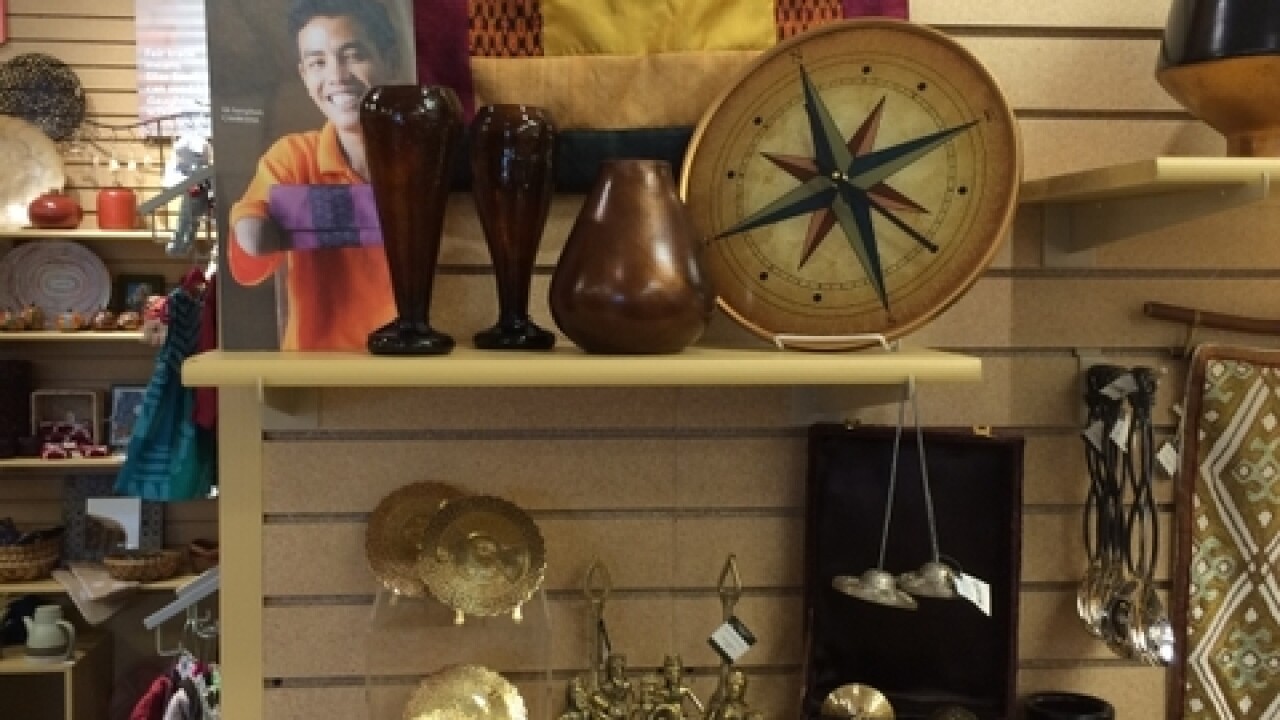 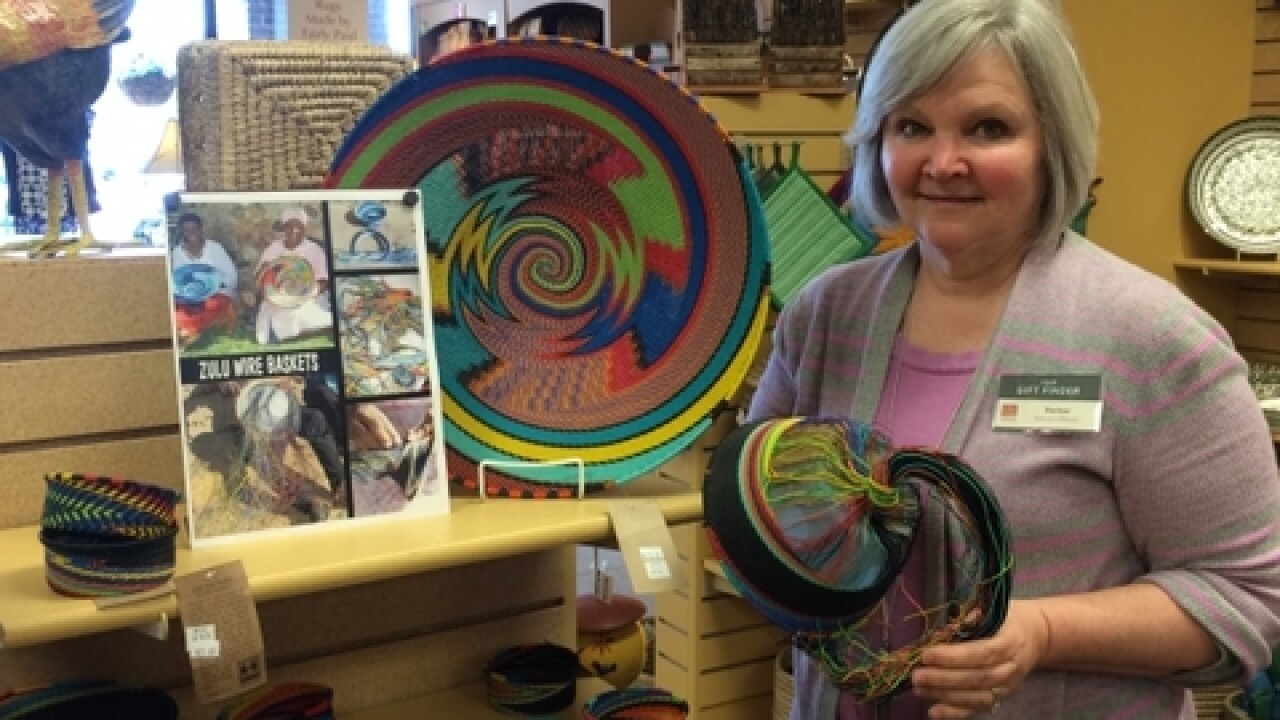 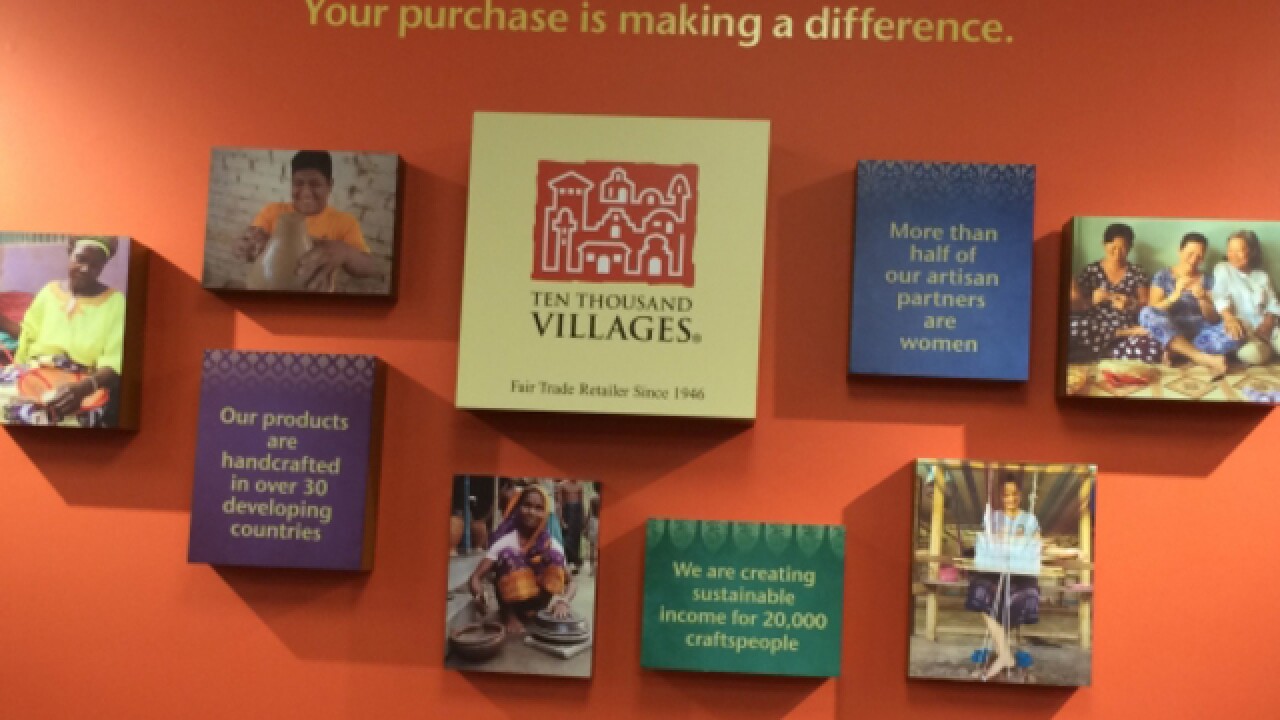 At the Ten Thousand Villages store, you can buy a hand-knotted oriental rug from Pakistan, a handwoven basket from Bangladesh or a wooden chessboard from India.

And behind each of these exotic novelty items lies a story of an artisan who is living in a faraway region, like Asia, Africa, Latin America or the Middle East.

Ten Thousand Villages is a nonprofit, fair-trade organization that seeks to empower and uplift the lives of thousands of disadvantaged artisans struggling to make a living in 38 countries. The group has stores in the United States and Canada — including O’Bryonville and Harper’s Point locally.

Darlene Rohrer-Meck, the nonprofit’s executive director in Cincinnati, recently showed off the innovative and unique handmade assortment of jewelry, home decor items, art and sculpture in the Harper’s Point store.

She explained that the mission of the nonprofit is not just to sell the products but also to change the lives of the artisans by granting them a chance to sell their work, earn a fair wage and live dignified, respectful lives.

“We help the poorest of the poor artisans, those who would not have had any other way of getting their products to market,” said Rohrer-Meck, a West Chester resident, who is a former social worker. She has been with the nonprofit for six years and in her current position for three years.

The store stocks items that are breathtakingly beautiful, skillfully created and heartbreakingly poignant. Among the colorful rugs, vases, pottery, blown-glass pieces, wall hangings, baby gifts, candles and clothing are also items that represent causes, such as art work from former sex workers in Pakistan, who stitch in a flower petal to symbolize that they have emerged from a life of “hopelessness and despair.”

She saw the formidable talent of the artisans and their debilitating poverty. She was convinced that if she could bring their handcrafted products to the United States, she would be successful at selling them and sending the money back to them.

In the beginning, she sold the items out of the trunk of her car to her family, her friends and her community. And then she began raising awareness of the artisans in various countries who are struggling to make a living.

Ten Thousand Villages quickly picked up on simple global truths: In villages worldwide, agricultural work is low-paid and seasonal, and if they have a bad harvest, workers have to borrow money from lenders, who charge such high interest that it can take several generations to pay back the debt. To supplement their income, the poor but creative villagers attempt to sell their products, but they often are badly exploited.

The answer to financial independence lies in self-sufficiency. And that’s the mission of Ten Thousand Villages: to help artisans in developing countries earn income by bringing their products and their stories to the world and building long-term trading relationships.

“I think Mahatma Gandhi said it best: “We are inheritors of a rural civilization. India does not live in its towns but in its villages,” and that’s true of many countries,” said Rohrer-Meck.

“We help artisans, especially women, earn their livelihood, and we also uplift all who are disabled and suffering from leprosy, HIV and AIDS.”

Ten Thousand Villages relies on volunteers, who travel to these countries and deal face-to-face with the artisans. The volunteers see firsthand how the money is used to build stable homes, schools and bridges. Entire villages are changed by the money the artisans bring in. The artisans get paid 50 percent before they start their projects, and 50 percent later.

But in many instances, when the artisans have been unable to deliver their products due to natural disasters or mishaps, they are still paid in full. On one such occasion, villagers in India were traveling on a bridge with their products for delivery and the truck overturned.

“Everything was gone, but we paid them so that they could continue their work,” said Rohrer-Meck.

After the recent earthquake in Nepal, the villagers accepted sympathy from their trade partner with a simple request: “Send more orders. We need the work,” they pleaded.

Ten Thousand Villages takes pride in the way it operates.

“We bring beautiful products to people at affordable prices. These are environmentally safe, often made with recyclable materials, and we never use any child labor,” Rohrer-Meck said.

“I am very passionate and excited about what we do daily. To make a world a better place, you have to give every life a fair chance. I want to live my life so that I create opportunities to have that happen.”

Others also give the nonprofit rave reviews.

Don Nofziger, a volunteer at the store, is a retired pediatrician who has been visiting Ten Thousand Villages for two decades now.

“I get an opportunity to learn about other cultures. I enjoy being here and telling people about different countries. I try to learn as much as possible so I can share the stories,” said Nofziger, who lives in Hyde Park.

Angie Pointer, 41, a Loveland housewife, was in the store shopping for a baptism gift.

“I buy special gifts and do all my Christmas shopping here, too. There is no place like this locally,” she said.

Ten Thousand Villages has two huge rug events coming up, at which classic, contemporary Persian and tribal rugs will be available: June 1-5 in Harper’s Point and June 8-12 at O’Bryonville stores.