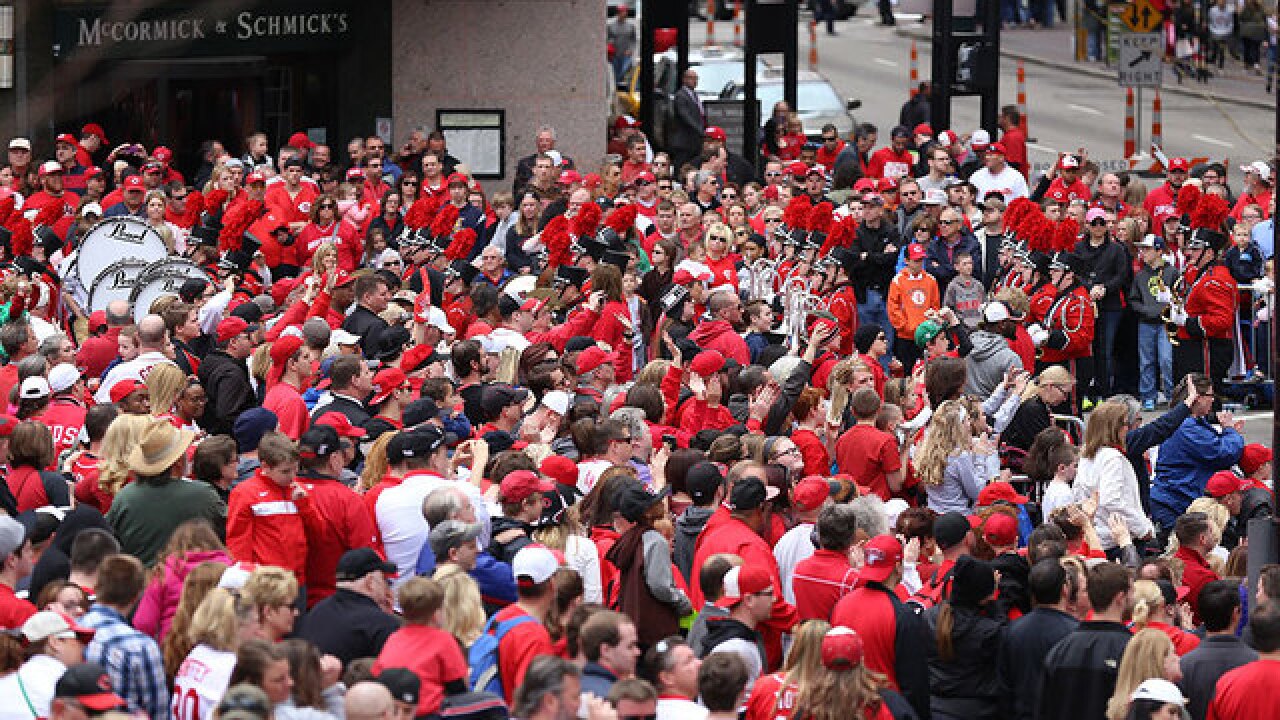 Emily Maxwell | WCPO
<p>Thousands of Reds fans packed Over-the-Rhine and downtown Cincinnati for the 96th annual Findlay Market Opening Day Parade on Monday, April 6, 2015. The Grand Marshals were The Nasty Boys — Norm Charlton, Rob Dibble and Randy Myers — a trio of relief pitchers who helped lead the Reds to the World Series in 1990. The parade began at Race and Liberty streets in OTR and ended on Fifth Street downtown.</p> 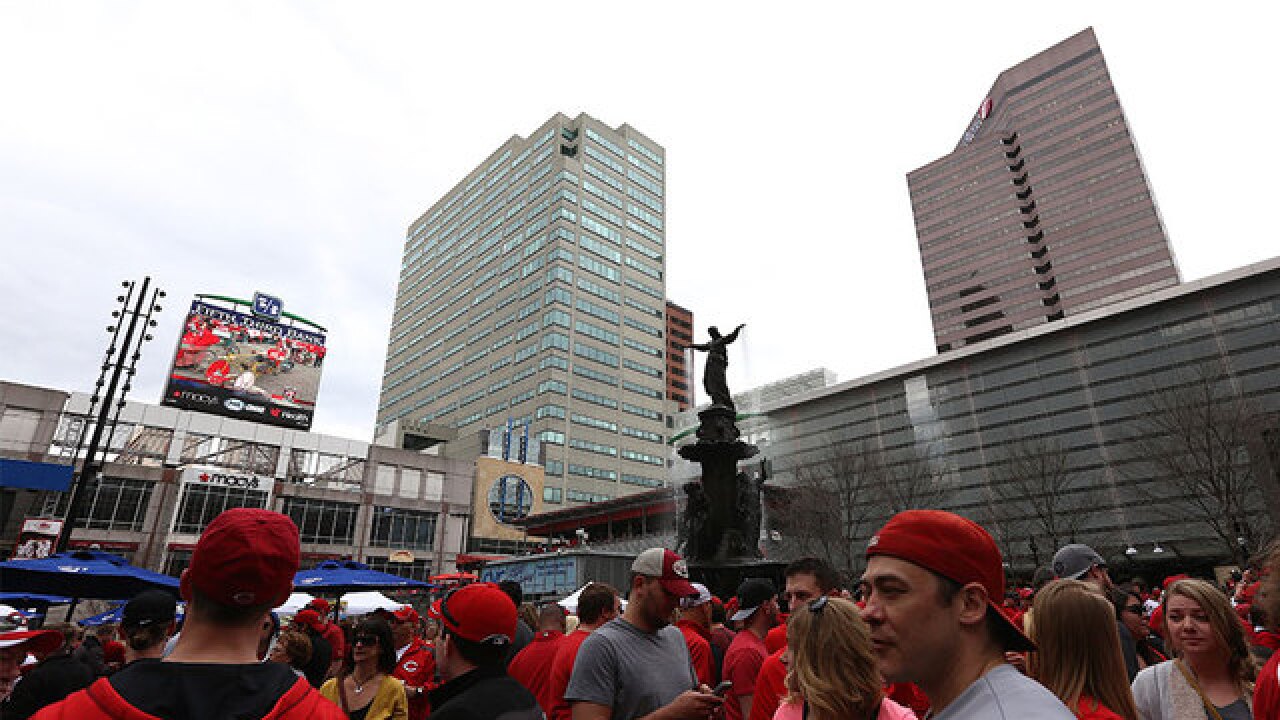 For those who actually have to work Downtown on Opening Day, it's a challenge. Though we probably don't need to tell you that.

Thousands of people who may journey Downtown just once a year. Closed streets. Packed parking lots. Heavy traffic. Long lines for burgers, brats, coneys and something to wash them down with.

And if you happen to know how many people call in sick, take a vacation day, or just plain vanish about 30 minutes before the first pitch, you may be the only one who’s privy to that information.

The Cincinnati USA Regional Chamber has assembled huge volumes of information on a Downtown workforce that numbers about 52,000. But one bit of information that it doesn’t have is an estimate of how many employees will be MIA on Opening Day, Chamber communications director Rich Walburg said.

But the day-long headache (two aspirin, not a migraine) for some will be offset by the unfettered elation for thousands of others who are convinced that Cincinnati’s unofficial holiday surrounding Game 1 of the Reds season ranks up there with Christmas, New Year’s and the day you landed the job you really wanted.

Interviews with people who work in retail or offices Downtown made it clear that Opening Day issues are best categorized as “Minor Irritants” rather than “Major Traumas.” It also was clear that Cincinnatians are hesitant to say anything critical of baseball in the hometown of the country’s first professional team.

“The only thing is that on Opening Day you’re stuck down here in a good way,” attorney Robert Karl said this morning about a block from his Downtown office in the Kroger Building at Court and Vine. “But it’s vibrant. It’s a nice experience and you don’t want to leave,” said Karl, who said he always gets out of the office long enough to watch at least part of the Findlay Market Opening Day Parade.

Jon Feldkamp said this morning he planned to get some work done at Fifth Third Bank on Fountain Square, although he acknowledged that it can be tough for die-hard Reds fans to focus on their jobs.

“A lot of people don’t get anything done on Opening Day. It’s just nothing but talk about the game all day,” said Feldkamp, a capital markets analyst who was working Downtown on Opening Day for the first time and also had a ticket for the 4 p.m. game.

Kevin Molloy, who was chatting with two friends in the mist of the Tyler Davidson Fountain this morning, said he had worked Downtown for about 25 Opening Days and now sells real estate for Huff Realty in an office north of the city.

Molloy said his wife Jennifer, who was working Downtown today at a market research company, was peeved because the daily parking rate for a lot at Eighth and Walnut doubled to $20 today.

Helen Webb said the fact that she’s not much of a sports fan means she can get a fair share of work done today and also watch part of the parade down Fifth Street. “It’s really not much of a big deal for me,” said Webb, who works in the Fifth Third office tower that overlooks Fountain Square.

“It’s changed a lot since they moved the game back later. The traffic leaving Downtown is much easier to deal with,” said Charissa Toole, who works in decision sciences for Fifth Third Bank.

In past years, when the game started at about 1 p.m., the end of the opener could coincide with the evening rush hour, creating some huge traffic problems for homebound commuters. But the later start today should guarantee that the game ends after the evening rush.

For the most part, a number of people who do business in the heart of the city acknowledged that huge crowds don’t always mean that they will wear out their cash registers.

“People who are coming Downtown to go to Richter & Phillips might not come Downtown on Opening Day,” said Matt Schloemer, who was behind the counter at an iconic Downtown jewelry store that traces its roots to 1896.

“They might be a little bit tentative because of the volume of people and the parade,” said Schloemer, who pointed out that the jeweler at Sixth and Main Streets is of the team’s sponsors for game broadcasts.

Alan Weiss, director of operations for Algin, an office furniture and supply store at 810 Main St., said he expects a heavier-than-usual influx of customers today even if they’re not really hunting for something for the office.

“For a lot of people who don’t come Downtown regularly, this is their day to be Downtown,” said Weiss, who plans to attend the Opening Day game as he’s done about 20 times before.

“It’s really fun. We don’t get in on a lot of the festivities, but it’s a feeling of hometown pride – Reds pride,” said Sarah McDermott Shell, who will be on the job when Weiss heads south to Great American Ball Park.

Jeff West, who works in cyber security for Great American Insurance Downtown and described himself as a serious baseball fan, said last Friday that he routinely avoids the Downtown crowds on Opening Day by taking a day off.

“I grill some hot dogs, watch the games all day and welcome in the baseball season,” West said.

Diane Weidner, a spokeswoman for Great American Insurance, suggested that it would be difficult for her to offer a detached and objective comment about Opening Day because of her company’s close ties to the team and a stadium that’s named for the company. She said employees are encouraged to wear red and that the company’s big screens will be tuned to the opener.

As might be expected, Procter & Gamble, the iconic consumer products giant that opened for business in Cincinnati in 1837, knows when to be upbeat.

“First off: We love Opening Day,” said P&G spokeswoman Tressie Rose. “It's a great tradition that instills pride in our city. It's good for Downtown businesses and exciting for the community. We expect some employees will take personal time or vacation to experience the day with friends or family.

“For our employees who are working Downtown on Monday, we are offering a cookout in the P&G Gardens where employees can watch part of the Findlay Market Parade and experience the Opening Day excitement,” Rose said.