Project's next phase: Making it the place to be 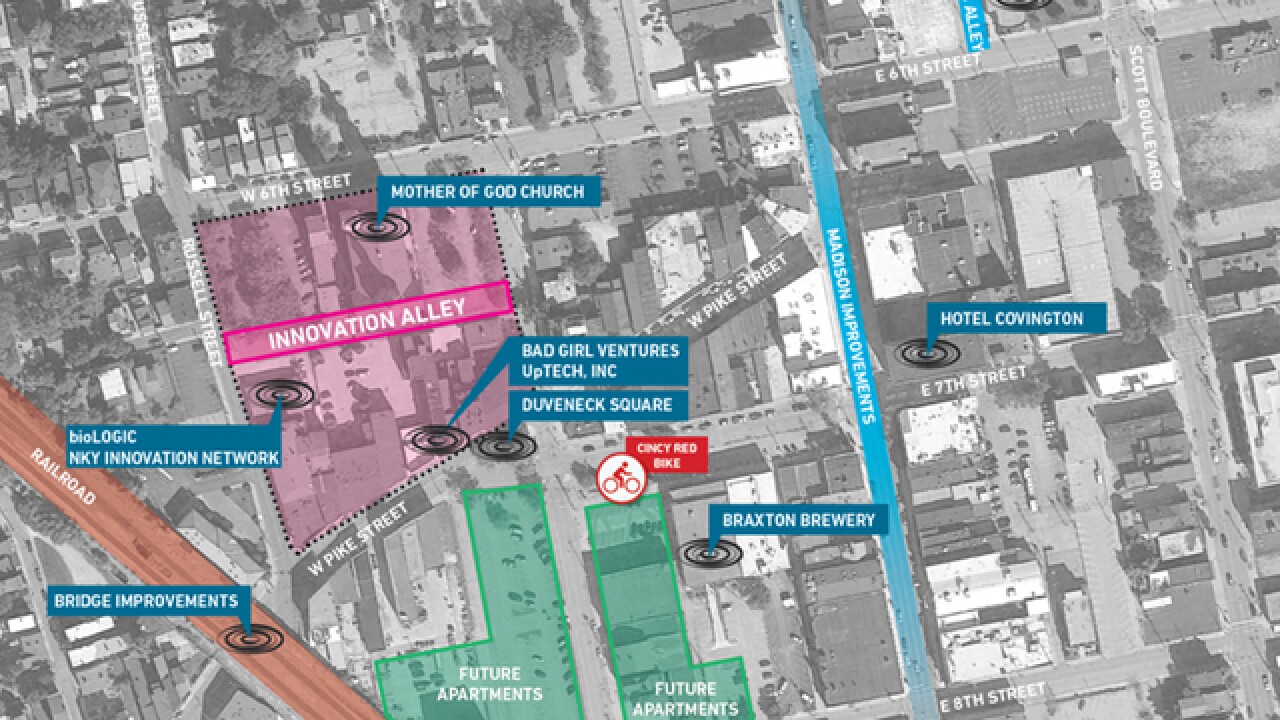 COVINGTON, Ky. -- Dig back far enough, and you’ll likely find that California’s Silicon Valley started with one street, populated by a handful of like-minded startups committed to making a big difference.

That’s a vision that excites the leaders charged with developing the rapidly expanding area now known as Covington’s Innovation District.

Within that district — which runs from the riverfront to 12th Street and east to west between Greenup and Pike streets — a one-block area dubbed “Innovation Alley” is now home to several established companies, as well as 19 early-stage businesses and hundreds of diverse professionals committed to growing the region’s entrepreneurial scene.

The alley is located between Mother of God Church on Sixth Street and several buildings fronting on Pike Street.

One Innovation Alley tenant is Bad Girl Ventures (BGV), a nonprofit organization that creates opportunities for female entrepreneurs through training and access to capital. BGV’s history in the neighborhood goes back to 2014, when the organization partnered with The Catalytic Fund and the city of Covington to build its headquarters at 114 West Pike St.

“I foresee this area becoming as vibrant an entrepreneurial scene as (Over-the-Rhine) has been,” Aichholz said. “The whole entrepreneurial ecosystem on both sides of the river partners well within itself and with local governments and with both big and small businesses. It is encouraging and a great time to be an entrepreneur in this region.”

Casey Barach is a driving force for growth in Covington’s business scene. In 2001, Barach set out to change the entrepreneurial climate in Northern Kentucky.

His team’s efforts culminated in 2013 with the introduction of UpTech, an accelerator program that would anchor ongoing expansion of the district whose streets are now home to coffee shops, restaurants, bars, yoga studios, design firms, breweries and the boutique Hotel Covington, which opened for business in late September.

Organizers are currently focusing their efforts within the outlined Innovation District, but Barach believes the coming years will bring similar progress across Covington’s 19 neighborhoods and beyond. He cited the Center for Great Neighborhoods’ recent renovation of the historic Hellman Lumber building on Martin Luther King Jr. Boulevard as an example of complementary development happening beyond the Innovation District.

“As far as I know, there was no official city plan to say, ‘This is how we’re going to do this,’” Barach said. “It’s all happening fairly organically, but with a focus on connecting highly traveled areas like the Innovation District with entertainment venues in (neighboring) Mainstrasse Village.

"Imagine if we could incorporate lighted pathways to get people comfortable walking between these areas. That’s another way these great assets can combine to grow the entire community.”

In addition to connecting Covington’s existing residents and businesses, the Innovation Alley project is focused on bringing jobs -- and thus more people -- to the area.

TiER1 Performance Solutions started with three employees utilizing UpTech office space on Madison Avenue. That company, which has since relocated to RiverCenter, is on track to employ more than 500 people nationwide, success that founding partner Normand Desmarais attributes to the company’s beginnings in Innovation Alley.

“We started out with three guys, two desks and one office,” Desmarais said. “Now we’re giving back to Covington in a lot of ways, by sitting on various boards and making investments of time, money and mentoring. Sometimes giving back is as simple as saying, ‘We started out here in Covington and we’ve done big things.’ Those words of encouragement are important, too.”

Last month, at an UpStart event that drew more than 500 attendees to Innovation Alley, planners introduced a three-phase plan for the area’s physical transformation. The project will begin in spring of 2017 and include installation of lighting, public art, movable outdoor furniture and food-truck staging areas, with eventual plans for a solar parking canopy, patio space, parking, awnings and the addition of trees and greenspace.

“Ultimately, we want this to be a place where people convene even when there’s not a special event going on. It needs to be a space that the entire community can share,” Barach said.