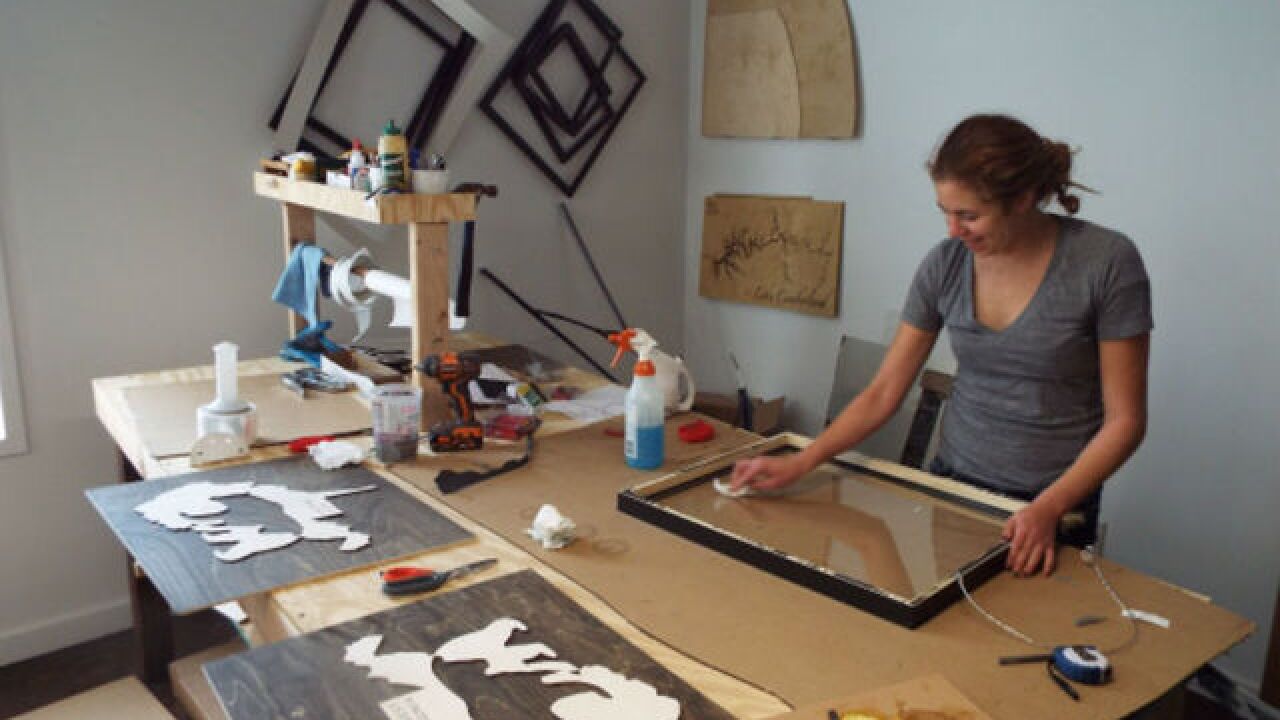 But entrepreneurship runs in the family. Their father, Ron Kirn, owns P&R Auto Repair in Covington. Their mother, a nurse, owns a promotional company.

And their brother, Brad Kirn, does business development for tech startup Astronomer.

“It didn’t scare us as much as it would other people,” Michele said.

How did they get started?

With Christine, who had learned to use a laser cutter in college. She made a sign for her father’s lake house on Lake Cumberland that brought tears to his eyes.

Soon, other lake house owners began asking for their own signs. The sisters created a website called Grainwell and began selling handmade signs, coasters and planters at local events.

Working out of their parents’ house and their father’s body shop, they sold $25,000 of goods for Christmas 2014.

Realizing they needed more space, they leased 316 W. Pike St. in February 2014 as a shop/production facility.

Last Christmas, they had more orders than they could fill, and sales have continued to grow. They’re on track to reach 100 percent year-over-year growth this year and 80 percent next year.

In June, they began wholesaling their products to nine boutiques in the Midwest, including Artichoke Curated Cookware Collection in Over-the-Rhine.

What about the products?

Any items that are personalized, such as a cutting board with the customer’s name on it, are also popular.

The sisters make most products by hand themselves, and if not, they make sure they’re made in America. They also use recycled wood, including wood rescued from trash bins.

“All of the items are so personalized, even if they produce 40 or 50 of them,” said Rebecca Volpe, director of the Northern Kentucky University Small Business Development Center.

“That’s the beauty in what they’re doing,” she added. “They’re so committed to producing in volume, in a way that’s still hand-crafted with the highest integrity in terms of product.”

How have they financed the business?

Initially, with a $10,000 line of credit to buy a laser cutter. Since then, they’ve bootstrapped using sales revenue.

This year, they also completed the LAUNCH course at female-owned business accelerator Bad Girl Ventures, and received a $12,500 loan from that nonprofit.

Sometime soon, they plan to relocate because they need more space.

“I think we will probably close the storefront by next year,” Melyssa said. “Having a storefront is almost a whole job in itself.”

They plan to push online sales, which now represent about half their business, so that wholesale and online sales will be their biggest sales channels.

They’d also love to travel the country in an RV to bring their products to more customers, but taking time off to do that is problematic.

What’s been their biggest challenge?

Sorting out their roles, which they did with help from personality assessments. Melyssa is head of design, Michele head of marketing/sales and Christine head of manufacturing/production, supervising two part-time employees. (The website also credits Dakota, their dog, who earned a degree in fetching from Kirn University, with being head of greeting customers.)

Whenever they have a disagreement they can’t resolve, they ask their parents for help.

“They are a triple threat,” Volpe said. “They are so well balanced, as far as an entrepreneurial team goes.”

Many who knew them thought that business would ruin the sisters’ close relationship, Melyssa said.

"But I think if anything, it has brought us closer together," she explained. “We’re very open and honest with each other, and I think that aids in our success.”