If you're running in the Turkey Trot, don't be surprised if 95-year-old Mike Fremont blows past you

Thanksgiving Day Race is 40-year tradition for him 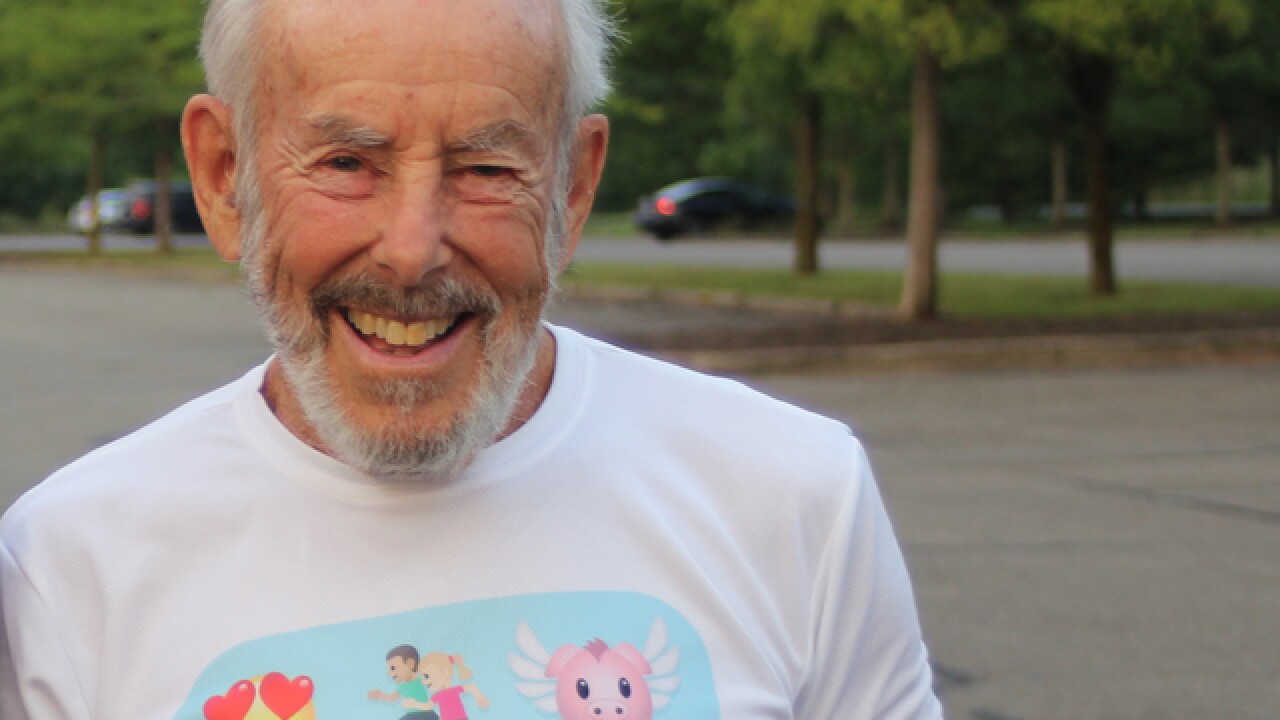 GLENDALE, Ohio -- If you're looking for inspiration to run or walk in this year's 108th annual Western Southern Thanksgiving Day Race, maybe this will help.

Ninety five-year-old Mike Fremont will again be hitting the pavement for the 6.2-mile trek. The Glendale resident currently holds national and world records for half marathons, marathons and canoe races. Fremont started competitively setting records after the age of 70.

For Fremont and family, the event has become a tradition.

"I'd say this year will make about 40 times," Fremont's son and Milford resident Thomas Fremont said. "Ever since I moved back to Cincinnati I've been running it, so that's been 39 years ago, and my father's run most of them with me."

Although the elder Fremont holds records for long-distance runs, he said he's not planning on setting any records for this year's 10K trot.

"It's more of a social thing because I don't need the exercise," he joked. "I don't usually race because the distance is a little short and I'm not that old yet."

It's Fremont's wry sense of humor and zest for life that sets him apart, ultra-runner Harvey Lewis said. The two running icons became friends after Lewis sent Fremont a congratulatory email following his record-setting Flying Pig Half run. He said he finds Fremont inspiring on three levels; first, his humanity for others; second, the unique pathway he's chosen to change the world for the better.

This year's been a busy one for Fremont in canoeing, breaking his own record for age in the 70-mile General Clinton Canoe Regatta as well as bringing home medals with other members of the Elderly Paddlers Association (EPA) at the USCA National Marathon Championships in Dubuque, Iowa.

"There was an interesting thing in that race that I've never seen before and I hope never to see again," Fremont said. "There was a table for runners at mile number six, and carefully arranged on the table were cocktail napkins on which were laid several pieces of bacon."

With mass quantities of turkey on the horizon, people may not want to hear that both Fremont and Lewis attribute their health and athletic ability to eliminating animal protein. Both have been vegan for 20-plus years. Fremont also credits the radical change in diet to eliminating metastasized tumors from his body after being diagnosed with cancer and given three months to live at age 72.

"I think we are, in effect, sort of machines," Fremont said. "I think given the right fuel and the right drink, which is water, we can go in indefinitely. If you look at Harvey, it's sort of shocking to be able to continue running that way day after day after day."

Lewis became vegan at the age of 19. He said as the second-heaviest kid in his middle school, he felt he needed radical change. After becoming vegan, he said, he saw a dramatic impact on his running, speed and his body's ability to recover. Ironically, he said, most people take better care of their cars than they do their own bodies.

"Mike is pretty idealistic for a young man at 95-and-a-half trying to get people to become vegan -- to inspire them in their own journey," Lewis said. "Me, I just encourage and try to shift people more toward that direction."

In addition to his athletic achievement, Fremont's well-known for his conservation efforts. In the early '70s he founded Rivers Unlimited, then later co-founded the national organization American Rivers. Locally, he helped pilot the Mill Creek cleanup as well as multiple waterway conservation efforts throughout the region. Given his reputation as a well-known activist, Lewis said, he asked Fremont to address his government studies class at the School for Creative & Performing Arts (SCPA).

"He's just so eloquent," Lewis said."The kids loved him. I've had lots of speakers, mayors, congress people, I've had really phenomenal folks, but I would say he's got them beat."

When it comes to his father, the younger Fremont describes his dad as an enlightened man. He thinks perhaps some ethereal thinking rubbed off from his grandmother, who kept company with the likes of Carl Jung, Claude Monet, Pierre Renoir and writer Somerset Maugham.

"My dad is a very noble person," Fremont said. "He wants to do well by his fellow man, he wants to help society, and I think that derives from a spiritual level he's achieved."

Lewis said that even now Fremont continues to be full of surprises, like when he noticed a pull-up bar in his house. After asking Fremont about it, Lewis said the 95-year-old was more than happy to demonstrate.

"Without hesitation, he just goes and does a pull-up and he holds it for literally like 15 seconds and he gently lets down. It was like walking across the room," he said.

When it comes to pull-ups, Fremont said his son Tom currently holds the family record. He said he challenged Tom by telling him he read an article about a mountain climber who could pull herself up the side of a cliff one hand at a time. Tom responded by training himself to do 25 one-handed pull-ups with each hand.

"It's staggering," Fremont said. "Just try do one and you'll see how hard it is."

The younger Fremont said fathers challenging their sons is just of rite of passage, and he's honored to earn his dad's respect.

"It's not easy to impress my dad, but he made me what I am in so many ways and I really appreciate it," he said. "He has an amazing will to live, he loves life and he enjoys people. He's just a brilliant guy."

Looking to upcoming events, Fremont said he'll again run the 10K in Florida,  where he and his wife, Marilyn Wall, winter with friends. The run will be in February, just after Fremont's birthday, so it will be his first event of the year, at age 96.

"Mike always says, 'At my age, you don't buy green bananas,'" Lewis said. "But I say, 'Mike, maybe you should buy them. You don't show signs of slowing down anytime soon.'"