I-Team investigation: Mental health a factor in 14 percent of police use of force incidents 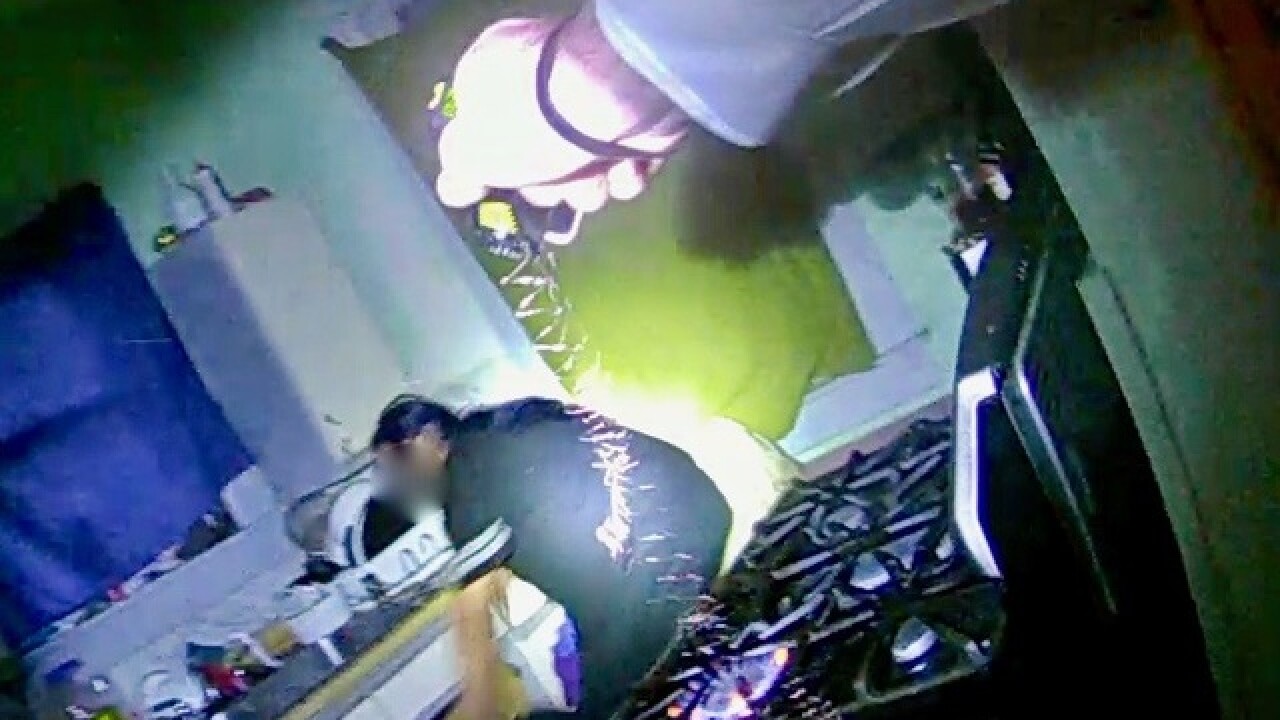 Editor's note: Although the mentally ill people in this report are identified in public records, WCPO has decided to shield their identity because revealing their names could exacerbate the mental health problems that brought them to the attention of law enforcement.

“You’re not under arrest, OK? We just had to do that ‘cause I didn’t want to shoot you,” Officer Robert Bernhardt told the 38-year-old man after the incident.

To which the man replied:

“Bullshit, you mother fuckers shoot people all the time. Why couldn’t you just fucking shoot me?”

It’s a scenario that has played out in our region dozens of times in the last three years: Desperate people in mental distress find themselves confronted by law enforcement. From Hamilton to Florence, police use of force records show officers are frequently the first responders for patients suffering a mental health crisis.

It’s not an easy job.

Atwell’s Covington-based agency provides crisis intervention training to police officers throughout the region, with the goal of improving responses to mental-health emergencies.

The Treatment Advocacy Center estimated in 2015 that people with untreated serious mental illness are 16 times more likely than the rest of the population to be killed in a police encounter.

Here in the Tri-State, mental health was documented as a factor in 361 use of force incidents since 2015. That’s about 14 percent of the 2,502 incidents that the I-Team has been analyzing in “ Forcing the Peace ,” a series of reports on how 32 local police departments regulate the use of force by more than 2,300 officers.

RELATED: Boone County reinventing how it regulates use of force

WCPO’s analysis of mental health-related incidents shows people are less likely to be injured, compared to cases in which mental health is not a factor. Police are also less likely to file criminal charges in mental-health cases and they’re more likely to use stun guns as a means of resolving such incidents.

That’s what happened in Hamilton on Jan. 23, 2018, when Officer Bernhardt joined a Butler County social worker in trying to convince a distraught man to drop a butcher knife in his kitchen. The conversation was caught on Bernhardt’s body camera, but the video is sideways and difficult to view. Here’s a partial transcript:

Subject: “Stay the fuck back. Because I will fucking make you shoot me.”

Subject: “Please back up. I don’t trust you.”

Officer: “Nobody’s here to hurt you.”

Subject: “I believe you are trying to hurt me.”

Subject: “I believe you are.”

Subject: “Then go in the other room.”

Officer: “We want to make sure you’re OK. You’re holding a knife. That’s not OK.”

Next comes the clatter of a knife, dropped on the kitchen counter. Seconds later, Bernhardt fires his stun gun, explaining his decision in his use of force report:

“I planned that if the subject put the knife down at any point and did not immediately comply with commands I would deploy my Taser in order to take him into custody without the fear of him falling on the knife … As the subject began to fall forward his arms went limp and fell and disconnected a wire from one of the probes.”

Because the man was still standing next to the knife, Bernhardt told a fellow officer to fire a second time. The man fell to the ground and was handcuffed. A supervisor reviewed the incident that night, writing that it “complies with departmental policy.” Hamilton Police Chief Craig Bucheit signed off on that assessment Feb. 5.

"We've made a lot of effort to work with our officers on mental health calls," said Hamilton Police Sgt. Brian Robinson. "This is a textbook example of how we like to see our officers react."

After watching video of the incident, Atwell declined to offer an opinion about whether officers were right to use stun guns because she was “not in the room and I’m not privy to all of the information.” But she noted that the situation could have ended worse and praised Bernhardt for explaining that he was trying to help.

“He was using his skill set,” Atwell said. “He was communicating and trying to get what he needed for this gentleman to do, which was to put the knife down.”

'We were able to keep his son safe'

Forest Park Police handled a similar incident without the use of stun guns in May, when a 30-year-old man called 911 threatening suicide. He ended up surrendering at gunpoint with officers ordering him to drop the knife at his neck.

“I opened the bedroom door at which time David was observed on the bed, kneeling, holding a knife to his neck,” wrote Detective Corey Hall in a use of force report on May 17, 2018. “I provided lethal cover with my hand gun as other officers covered him with the less lethal options until he was successfully removed from the residence.”

Forest Park’s Assistant Police Chief, Captain Rick Jones, said Hall was justified in pointing a gun at the suicidal man because they were unable to engage him in conversation from behind his closed bedroom door and didn’t know what weapons he had access to.

“What we wouldn’t want to have happen is us open the door and he’s standing there with a weapon pointed at us and then we’re unable to defend ourselves,” Jones said. “It’s not a way to threaten a person at all. It’s really just protection for us.”

Video of the incident was unavailable because Forest Park does not have body cameras. Jones said the man’s father thanked a Forest Park sergeant days after the incident and “expressed his sincere thanks that we were able to keep his son safe.”

'They typically don't trust us'

Gratitude is often not the response police receive when dealing with people in a mental health crisis.

“They typically don’t trust us,” Norwood Police Lt. Ron Murphy told WCPO. “We want to get them help, but they don’t understand that most of the time.”

“The police showed up and grabbed me, threw me on the ground and commenced hitting me,” he said. “I didn’t know why they were there.”

Norwood’s use of force report said the man was “withdrawing from drugs and attacking his son” that Sunday afternoon. When officers asked if he had a weapon, the man asked, “Are you going to kill me?” The man was “extremely difficult for all three officers to get into custody.” When he was taken into custody, he “made several strange statements about the antichrist” and asked “medics if they were going to shoot him.” The man's mother told officers her son was “under the influence of crack cocaine.”

He told the I-Team he was not using crack. He said he suffers from schizophrenia and was “on the borderline” of an acute episode that day.

Norwood Police Sgt. David Lewis deemed the use of force appropriate in a three-page review of the incident that cited drug use as an important factor.

“Individuals who are under the influence of crack cocaine are unpredictable and their threshold for pain is greatly increased making their apprehension much more difficult,” Sgt. Lewis wrote. “The officers knew he displayed violent behavior and continued the violent behavior as he interacted with officers.”

Lt. Murphy told WCPO officers didn’t know about his schizophrenia, but he’s not sure it would have changed how they responded to him.

“The call we got from 911, there was definitely an immediate danger,” Lt. Murphy said. “Sometimes, our tactics upon arrival are based on the information our dispatchers receive from a caller and sometimes that information is just not accurate.”

The lack of information is a problem that area law enforcement agencies are trying to address with Stepping Up, a three-year-old national initiative aimed at reducing the estimated 2 million people with mental illness who are booked into jails every year. The goal is to increase partnerships between law enforcement and mental health professionals.

“We’ve worked very hard in this region to upgrade law enforcement’s response to mentally ill persons,” said Al Gerhardstein, an attorney who represents victims of police misconduct. “It is a very dangerous run but it’s also one that we’ve learned a lot about in terms of how to handle it so we don’t have violent outcomes.”

Gerhardstein said the outcome might have been different for James Clay if police had known he was mentally ill when they attempted to serve a felony warrant on the 20-year-old Walnut Hills man in August. Police said Clay was shot after he pulled out a pellet gun and charged at Officer Ronald Schultz. Clay was killed. Schultz was injured.

“He was mentally ill but they didn’t know that,” Gerhardstein said. “If they had known that they might have sent the Mental Health Response Team.”

That’s a team with specially trained officers who learn how to defuse tensions with verbal communication instead of pointing or using weapons.

“The best practice now is to promote verbal de-escalation wherever possible,” Gerhardstein said. “I would hope that departments are moving more in that direction and away from going to their weapons so quickly.”

Even in cases where best practices are followed, interactions between police and the mentally ill can end in ways that are deeply troublesome to all involved. Tonight at 11, I-Team Chief Investigative Reporter Craig Cheatham will examine a Cincinnati incident that a mother described this way: "It was like a horror movie unfolding all of a sudden."