Inside the Hyde Park mansion used in 'Carol' 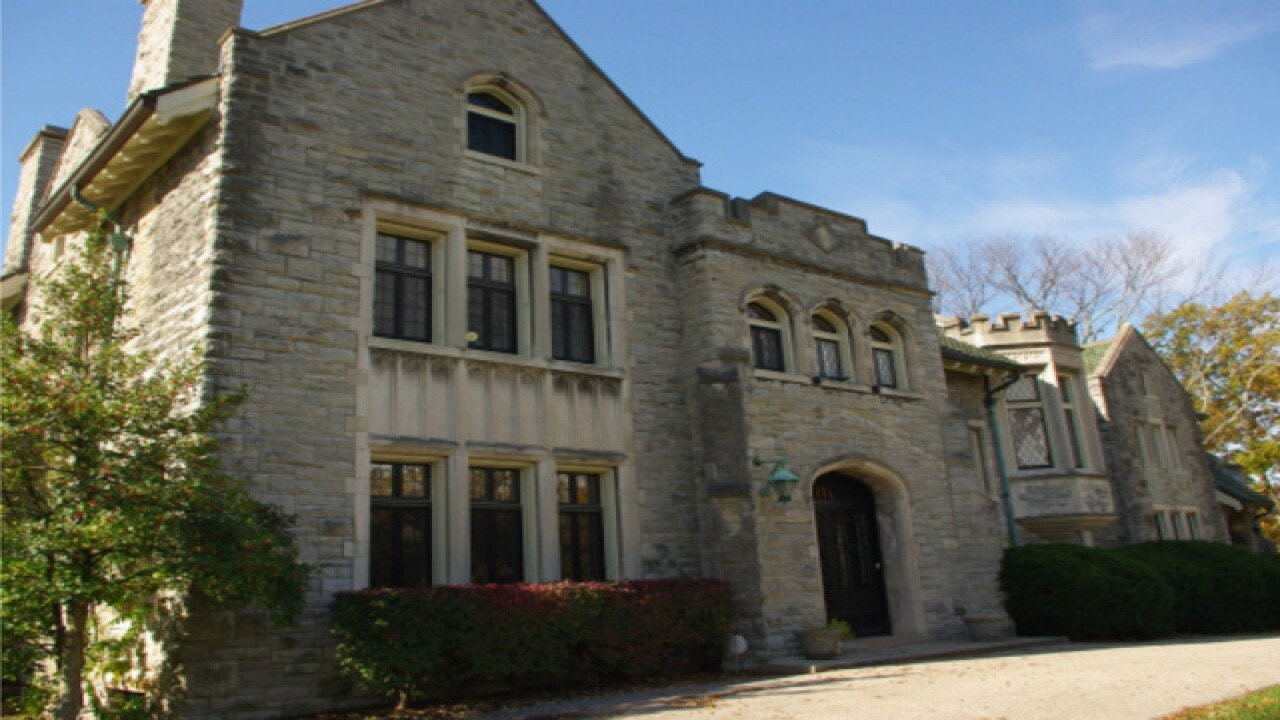 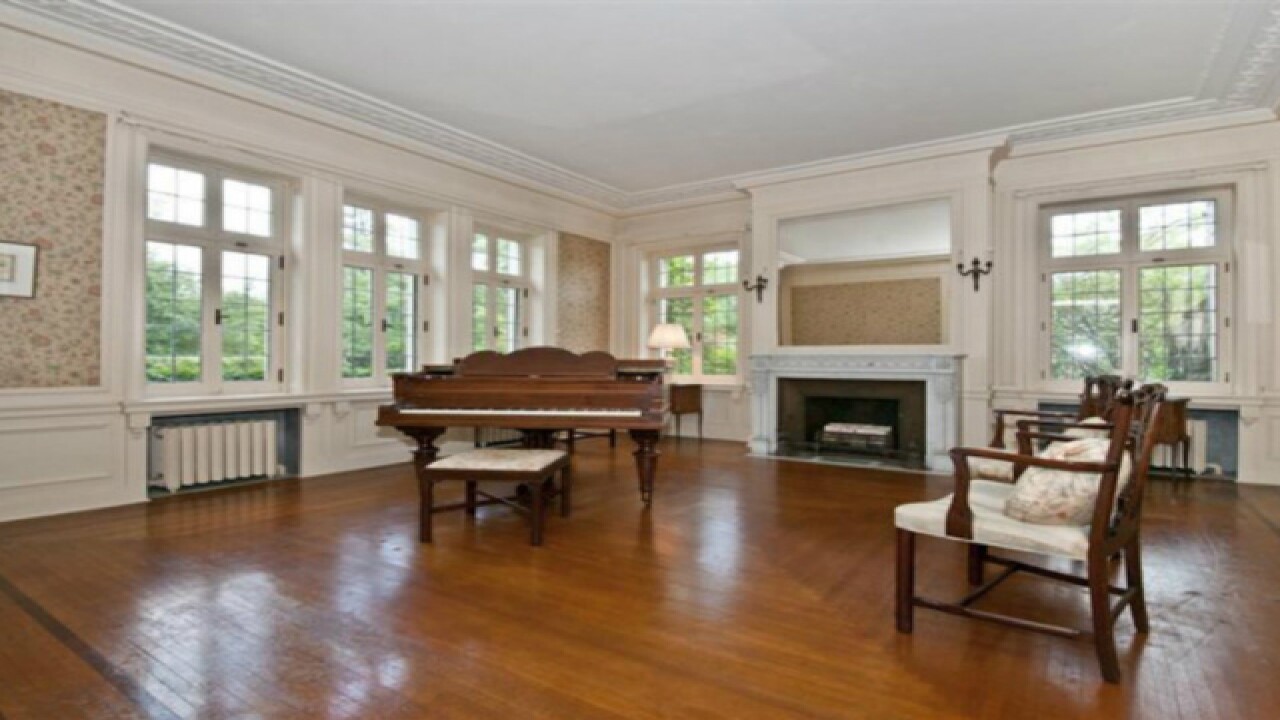 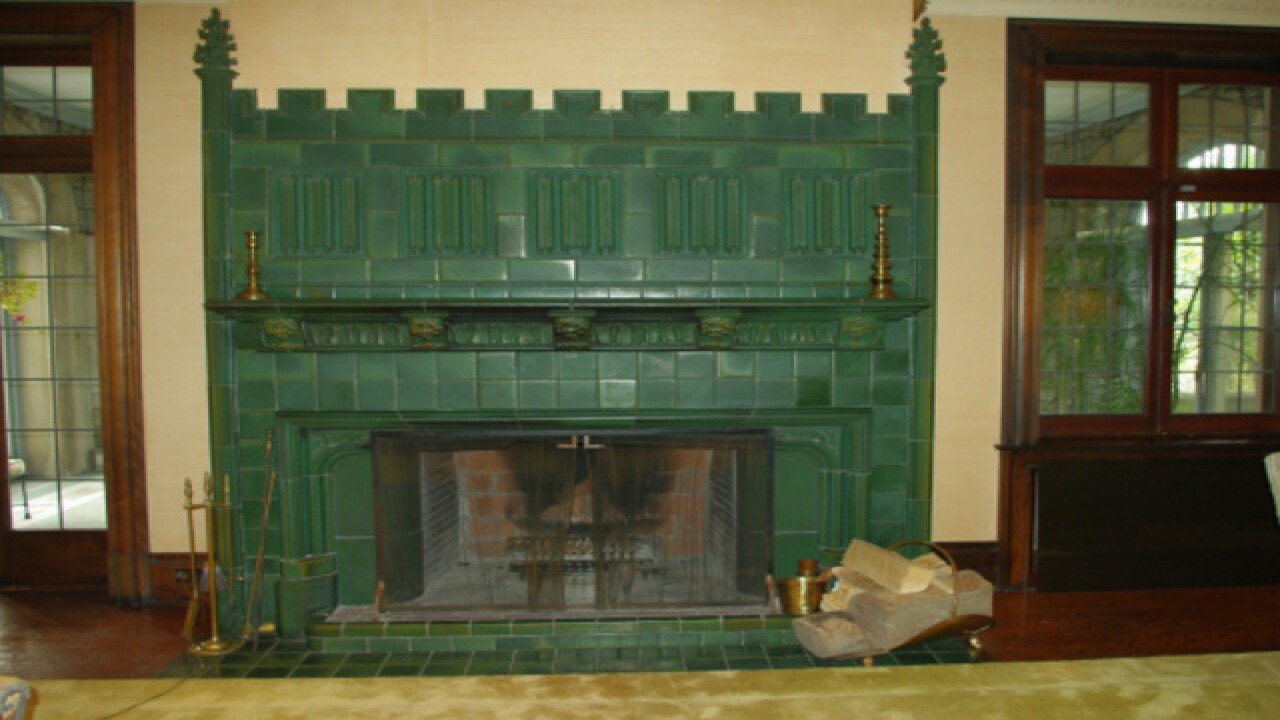 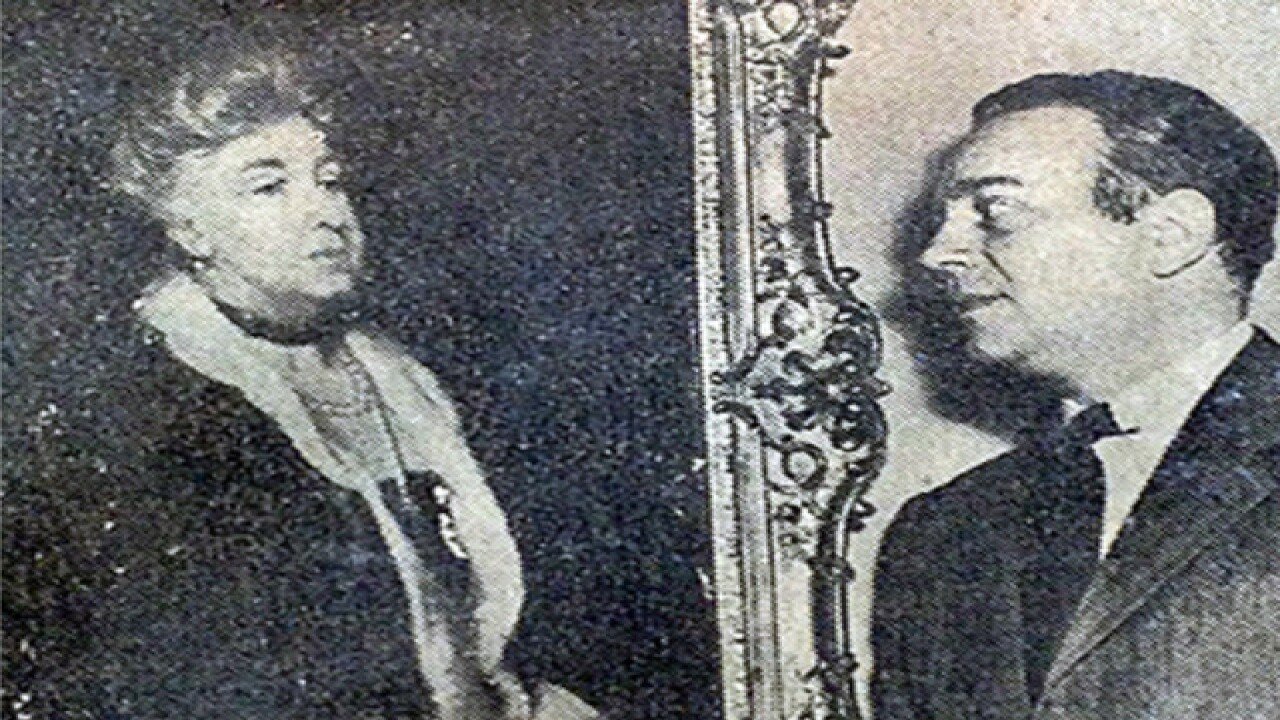 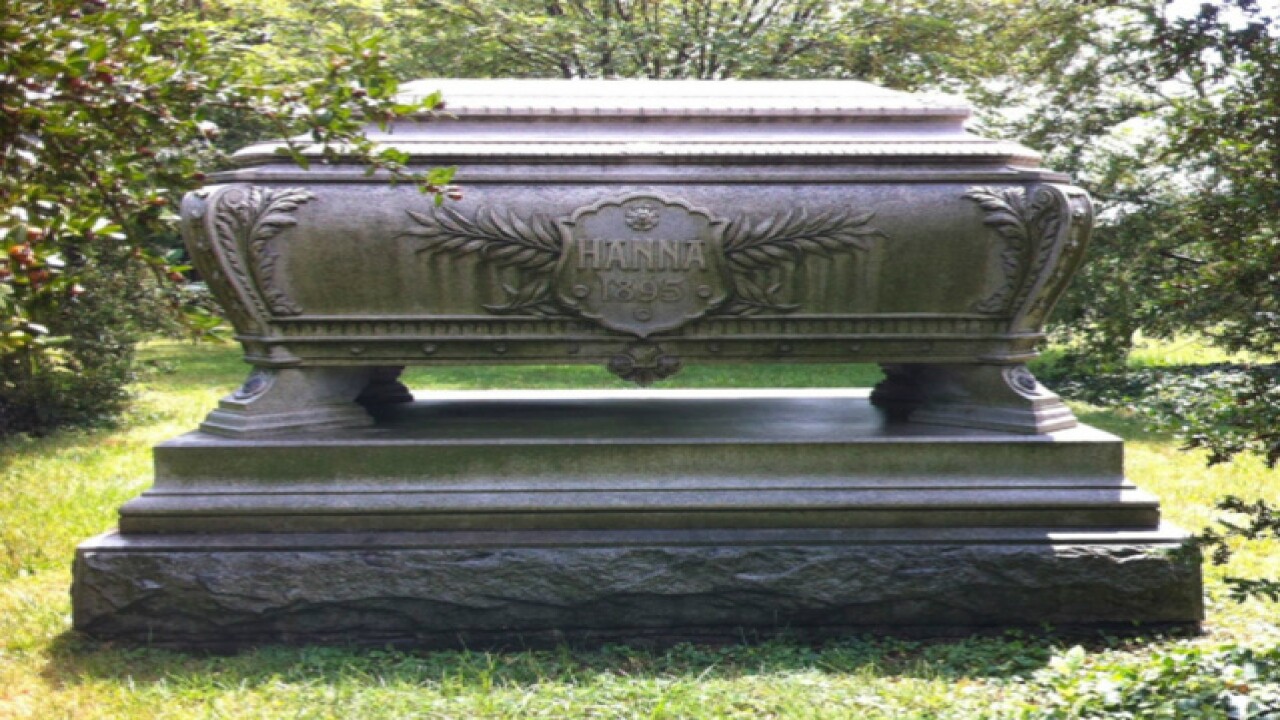 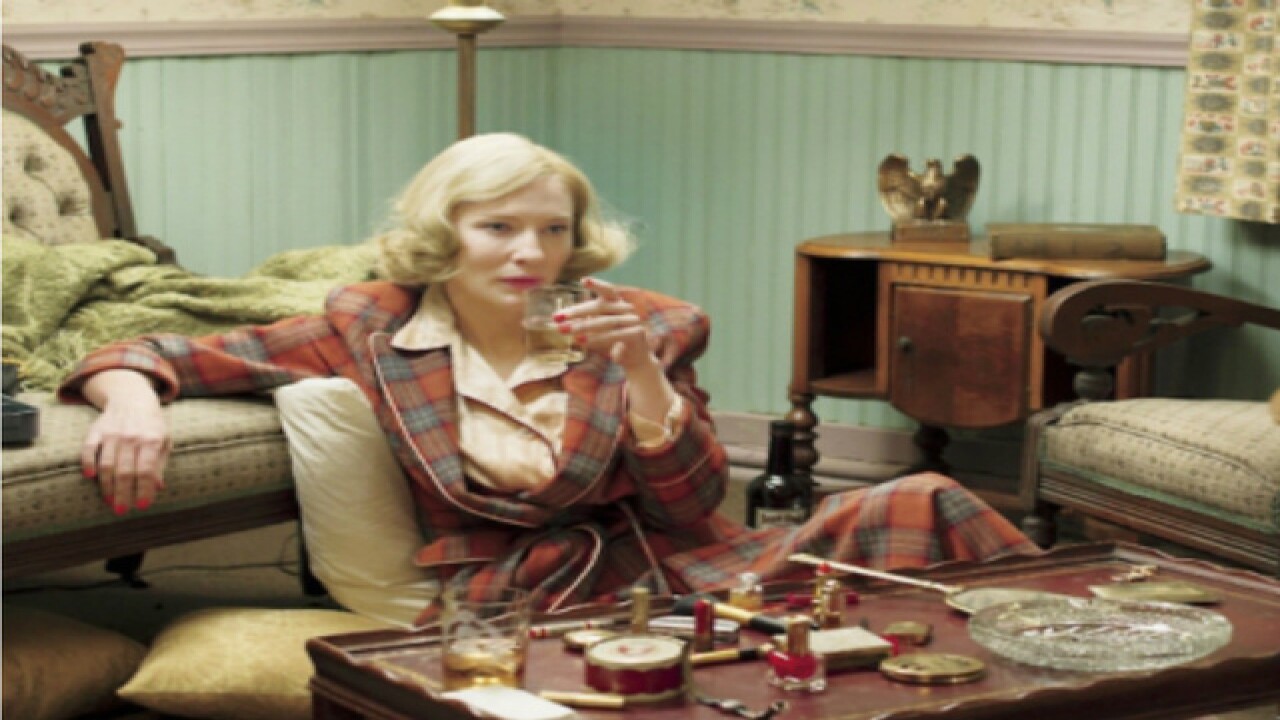 CINCINNATI -- The early awards season buzz over the new Cate Blanchett movie “Carol” is a testament to the beauty of Cincinnati, where director Todd Haynes shot most of the movie’s scenes during 34 days in spring 2014.

The buzz is heightened over how visually beautiful the film is thanks to the best cinematography award given the film’s Edward Lachman on Dec. 2 by the new York Film Critics Circle.

It’s also a tribute to Mary Hanna (1860-1956), the never-married, wealthy and publicity shy heiress who built and lived for 50 years in the 110-year-old Hyde Park mansion that Haynes used as the “Carol” family home.

What made Hanna’s mansion worthy of Hollywood? And just who was Mary Hanna? Read on.

“Carol” takes place in 1952 and is set in New York where a complicated sexual relationship begins between a married mother in the throes of divorce (Blanchett) and a Manhattan shop girl (Rooney Mara).

Not only is the Bedford limestone and green-tile roofed Hanna House a dramatic structure New York-worthy, it’s also trapped somewhat in the 1950s. After Hanna died in 1956, Dr. Charles M. Barrett and his wife, May Belle, purchased the house, and it became home to their six children.

The Barrett’s furnished it with high quality decor, mixing in traditional and 1950s styles. Little has changed since, according to Michael Kelley, who spent 200 hours in 2013 researching the mansion and the Hanna family in preparation of the annual Great Home Tour of the Architectural Foundation of Cincinnati, of which he was president.

“The home is in perfect 1950s condition,” said Kelley, director of interior design services at KZF Design in downtown Cincinnati. “It has been perfectly preserved and probably is the perfect solution for filming this movie. It’s cheaper than using a soundstage.”

Movie and Mansion a Perfect Match

A Hollywood director could not help but be drawn to the Hanna House’s stately gothic-revival façade, its spectacular park-like setting and its views of the Ohio River, Northern Kentucky hills and Cincinnati skyline.

In 1905, after inheriting what would amount to be about $20 million in today’s currency from her financier father, Mary Hanna hired renowned Cincinnati architects Alfred O. Elzner and George M. Anderson to design the house. Elzner & Anderson were a hot commodity at the time, basking in the groundbreaking success of the 16-story Ingalls Building at Fourth and Vine streets downtown, the first reinforced concrete skyscraper in the world.

Hanna House was built in 1905-06 on Grandin Road on a wooded, 7.82-acre lot. Elzner & Anderson gave it four large bedrooms and three bathrooms for the family and its staff as well as two servants’ rooms and a fourth bathroom on the second floor. Up a flight are two guest bedrooms, a fifth bathroom, a family room and a boiler room.

The true beauty and craftsmanship in the home are concentrated on the first floor, with its front-to-back, coved and carved entry hall being the jaw-dropper. To the east of the hall is a large music room with carved marble fireplace and a living room with a gothic-style Rookwood fireplace like no other.

The living room opens onto a large, covered sunroom with Italian terrazzo tiles and plenty of space for porch parties.

A third fireplace, also made of Rookwood tile, is the foundation of a massive, carved-wood mantel and over-mantel that dominates the dining room. The room is banquet-sized and looks out over the backyard where there is a fountain and Rookwood bench with swan-shaped arm rests.

Upon Mary’s mother’s death in 1909 of “the grip” (influenza), the Cincinnati Enquirer wrote this about the Hanna mansion:

“The house which Mrs. Hanna (the paper credited Mary’s mother) built is on the Grandin Road and is absolutely palatial. It is a gray stone mansion, and the grounds comprising many acres, slope down to the river. They are being converted into a most beautiful garden and park.”

Sounds like a good place to shoot a Hollywood movie, doesn’t it?

Kelley said it’s fantastic that “Carol” will cast a very positive light on Cincinnati and encourage other filmmakers to shoot here on locations such as the Hanna House.

“And it’s great that it brings attention to the woman who built it,” he said. “She did wonderful things for Cincinnati. She was a very quiet, reserved individual who did a lot of things for children, for the arts and for the progression of medical improvements.”

Researching Hanna, Kelley said, was made difficult by her private nature.
Kelley said Hanna often would make sure she was away from Cincinnati – Kelley documented 12 trips abroad, and Hanna had vacation homes in Maine and Florida – when her attorneys announced one of her largest philanthropic donations. She avoided the hoopla, of it all, disdaining the attention of the press.

She didn’t even attend the Dec. 12, 1946, press conference at which Cincinnati Art Museum board of directors president John J. Emery announced her no-terms-attached, “princely gift” to CAM of 34 European paintings by masters such as Gainsborough, Renoir and Degas that were valued at $1 million (about $12 million today).

Emery addressed the press while standing next to a portrait of Hanna: ”With Miss Mary Hanna’s munificent and typically generous gift, the Art Museum’s position among the major art museums of the country is powerfully enforced,” Emery said.

Mary Hanna died five days short of her 96th birthday in 1956, leaving behind an estate that would be worth about $47 million in today’s currency. She willed the equivalent of $4.3 million in the form of remembrances, gifts and annuities to her servant staff, friends, distant relatives and godchildren.

The rest of Hanna’s money, about $42 million today, was halved between two institutions she treasured: Cincinnati Art Museum, for which she financed an entire wing in 1929 that was dedicated to her parents; and the University of Cincinnati, which benefited from her gifts that often were earmarked for medical research.

Life Of Tragedy And Giving

The first half of Mary Hanna’s life was marred by tragedy, but the second half was marked by philanthropy and public service, both hallmark characteristics of many wealthy Cincinnatians reared in the Victorian Era.

Hanna was born on June 10, 1860, the youngest of nine children, whose family had moved to Cincinnati from Hanging Rock, Ohio, around 1850.

Five of Mary’s eight siblings died as infants or children, succumbing to scarlet fever, tuberculosis, measles or hydrocephalus, according to burial cards archived at Spring Grove Cemetery. But it was the loss of her three adult brothers – Charles in 1893, Ellison in 1894 and Thomas in 1895 – that cast a pall over the lives of Mary and her aging parents. All three brothers were in their forties.

Hanna’s father, Henry, was a multi-faceted financier with interests in banking, iron, coal, real estate, railroads and utilities. He used his riches – his estate would have been worth about $60 million today – to honor his lost sons by building and later equipping Hanna Hall on the University of Cincinnati campus.

Mary, at the age of 44, used the inheritance she received upon Henry’s death in 1905 to build her house that she shared with her mother, Mary Jane Ellison Hanna, whose relatives included the Tafts and the Sintons.

The 1940 Census shows that Hanna lived with five servants and Rebecca Larkin, a Dayton-area native who began her career as a seamstress, possibly of lingerie, Kelley said. Larkin lived on Broadway downtown until moving into the Hannah House in 1917.

Historical records on Larkin found on ancestry.com listed her as being a nurse, a secretary and a companion. Hanna left $250,000 to her “good friend and companion” in her will, but Kelley said Larkin ended up receiving an annuity that might have amounted to just $100,000.

Hanna died on May 5, 1956, just five days short of her 96th birthday. She was buried with her family at the sarcophagus-style monument she had erected in 1905 in Section 99, Lot 20 at Spring Grove Cemetery.

Michael Kelley penned this eulogy-like paragraph on Hanna for his Architectural Foundation of Cincinnati report:

“Miss Hanna was a notable patroness of the arts and education. She carried a fine tradition of turning back to the public, in carefully chosen ways, a large fortune obtained by supplying essential utilities to the public. She was, personally, a woman of great shrewdness and understanding, as well as beneficence, and her life enriched the city of which she and her family were so long and so solidly a part.”

A Screening Of “Carol”

“Carol,” which was nominated for, but did not win, the prestigious Palme d’Or award at the 2015 Cannes Film Festival in France, premiered in the U.S. on Nov. 20. It is in limited release with no set date to open at theaters here.

The Greater Cincinnati & Northern Kentucky Film Commission, however, will roll out the red carpet at 4:15 p.m. Dec. 12 for a screening of “Carol” at the Esquire Theatre in Clifton. A 7 p.m. gala will follow at the Cincinnati Club, downtown. Tickets costs $150 and can be reserved by calling 513-784-1744 or by emailing the film commission.

Peter Bradshaw of The Guardian gave “Carol” five stars in his Nov. 26 online review:“The writing and performances are superb, the production design and costumes by Judy Becker and Sandy Powell tremendous. And the effect is intoxicating.”

“It’s awesome material, and probably is going to be one of the more successful films this year,” said Kelley, who is “absolutely” excited to see it but won’t until it has been showing for a few days. “I don’t like crowds,” he said.

Status of The House

Recently on the market for $2.95 million, the Hanna House is no longer for sale. It was purchased in trust by First National Bank in 1987. A proposed development on the adjoining grounds would result in more than 10 new homes, but the existing Hanna House would remain.