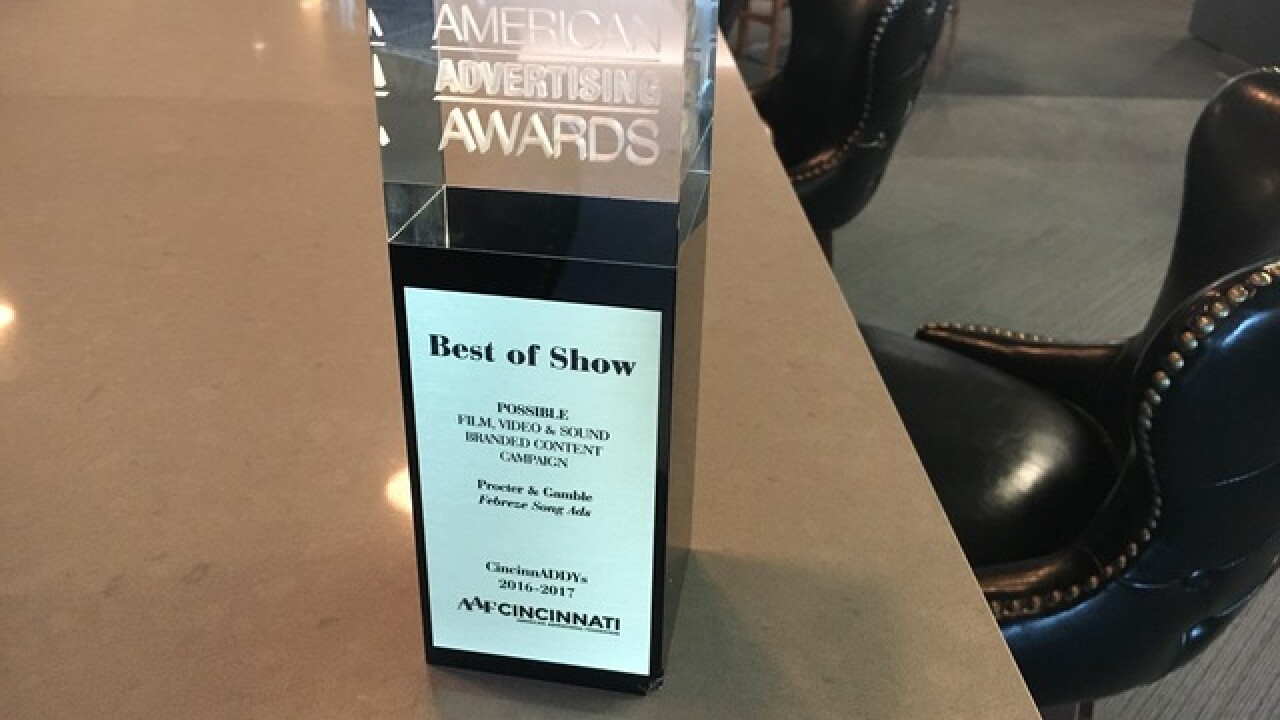 Copyright 2017 Scripps Media, Inc. All rights reserved. This material may not be published, broadcast, rewritten, or redistributed.
<p>Possible's campaign for Febreze "song ads" won local and regional awards from the American Advertising Federation</p>

“Music is the universal storytelling language,” said Russo, creative director at the Downtown advertising agency, Possible. “Music serves no purpose other than enjoyment. So I think there’s something at the core of it that connects you emotionally to the subject matter.”

The end result of that thinking is an ad campaign for Procter & Gamble Co.'s Febreze brand, which “tricks” listeners of music-streaming platforms with 30-second ditties that tout odor-elimination products for the home and car.

The campaign has attracted more than 350 million “listens” on Pandora and other streaming sites and about 2 million views on YouTube. Its up for a national Addy award on June 10, proving that Cincinnati agencies can still be relevant at P&G, even as the global advertising giant shrinks traditional ad spending and consolidates accounts as part of a $500 million cost-cutting strategy announced in 2015.

“The campaign has received incredibly positive feedback from consumers,” the Febreze brand said in a statement. “We are very excited Possible has been nominated for an Addy.”

The campaign is part of a comeback story for Possible, which eliminated about 70 jobs last year when it lost the J.M. Smuckers account. Local employment stands at 110. But its prospects are rising as the agency works on new assignments from Boston Market, Cincinnati Shakespeare Company and Standard Textile.

Possible has about 1,400 employees worldwide. It became a more important player in the Amazon universe recently when its parent company, the British advertising conglomerate WPP, announced the acquisition of Marketplace Ignition LLC . It’s a consulting firm that helps about 200 brands boost sales on Amazon.com.

All that aside, the campaign is an example of “great advertising,” said Greg Allenby, an Ohio State University professor of marketing and logistics.

“What they’re exploiting is a rich memory network associated with these sorts of songs,” Allenby said. “They’re tapping their brand into that network. That’s a great idea.”

Russo said the Eureka moment came when her team of branding experts and music nerds were brainstorming about ways to help the Febreze brand. She calls it a “keystone account” at Possible, which has worked on social media assignments for the Febreze team for about seven years.

Russo is a 2006 Xavier University graduate with degrees in English and vocal music. In 2009, she won the Cincinnati Opera’s first “Opera Idol” contest, landing a $3,500 contract for her talents as a soprano.

On the Febreze campaign, she’s played the role of producer, guiding a group of data analysts and New York-based musicians to pick music genres that match the personality of various Febreze products.

“This is a dream assignment for us,” she said. “The meetings are loud and fun and the people outside want to be inside brainstorming with us.”

The first ad was an iTunes radio spot that was crafted to sound like Taylor Swift, if she was somehow moved to croon about how “you can get it fresh with Febreze in Tide original scent.”

“(Taylor Swift) was a big inspiration point,” Russo said. “It started everything with this amazing melody that you can’t get out of your head.”

From the beginning, the Febreze songs generated social-media buzz.

There's literally no difference between that Spotify country song ad for Febreze and a regular country song.

@Febreze_Fresh when will you take down your country song ad on spotify? @Glade doesn't annoy me when I'm listening to music.

“People will tweet that, ‘I was tricked. It’s a Febreze song, but I love it.’ You know we all share those tweets. We love to hear that kind of feedback,” Russo said.

Possible’s renditions included a Country Music tune that extols the virtues of a Febreze air-vent clip for cars and, of course, trucks. Beatboxer Doug E. Fresh did a holiday song, “The #12Stinks of Christmas.” Febreze’s line of “small space odor solutions” got its own Rap song.

“It might be my favorite,” Russo said. “Small Spaces is this little tiny thing that you kind of put out for up to 30 days and it gives continual, always-on odor elimination and freshness. So, it’s small but it’s got attitude. So, we thought Hip Hop.”

P&G and Possible wouldn’t provide business results from the campaign, in terms of how much it cost and whether it led to sales surges for Febreze products.

But Russo said its social-media variations of the song produced 56 percent higher-than-average “click-through” rates, which measure the number of times people click on content for more product detail.

CEO David Taylor called out the Febreze brand last October as an example of how smarter retail strategies have enabled P&G to grow product categories, including the car and truck product for which Possible developed its Country song.

It’s a key part of P&G’s strategy as it struggles to reverse four years of declining sales from divestitures, global uncertainty and market-share losses to smaller, more nimble competitors. Taylor said Febreze achieved profitable growth by developing a superior air freshener for cars and convincing retailers not to sell them in the car aisle.

“It was a sleepy category” that P&G doubled in size to $500 billion over six years, Taylor said. “We led that. Today, we have almost a 45 percent share of that category.”