How an unfinished song led to Cincinnati's newest festival, Brandemonium 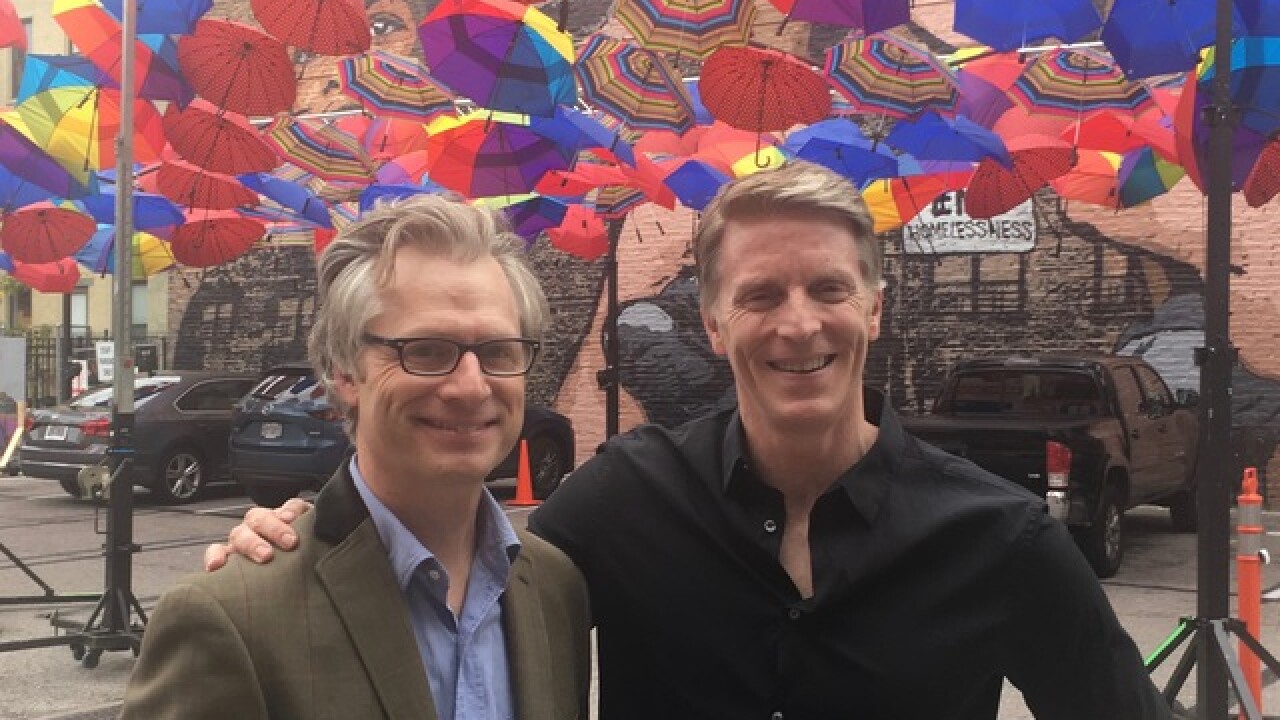 Bill Donabedian finished a song for Kevin Canafax in 2013, starting a friendship that could make Cincinnati the envy of the branding world.

Brandemonium is a four-day business event that includes speeches and networking sessions along with 15 public displays or “brand activations,” like the cluster of Totes umbrellas now hanging over a parking lot near 12th and Vine streets in Over-the-Rhine.

The event runs Wednesday through Saturday at Duke Energy Center Downtown. The founders hope their “international brand conference and festival” will someday reach the same stature as the Cannes or Sundance film festivals or the South by Southwest technology and music festival in Austin, Texas.

First-year attendance will exceed a thousand people. The founders say that’s good enough to guarantee that a second year can happen.

But that doesn’t explain the unfinished song.

“We were both invited to a music party hosted by Tim Schigel with Cintrifuse,” Canafax said. Donabedian is a drummer, Canafax a guitarist who was stuck on the bridge of a song he’d been writing. So, he gave Donabedian a CD at Shigel’s party and asked him to help finish it.

“That launched a collaboration and partnership where we wrote a couple of songs together and one of them actually has been published,” Canafax said. “And then we started to find out that we had a lot of mutual interests.”

Editor's Note: This is part of a continuing series about innovations having an impact on the Tri-State economy. Previous reports traced the origin of the Flying Pig Marathon , the Howl at the Moon Saloon concept and " undershirt entrepreneurs " Bob Dilts and Michael Droessler.

This is an origin story worth telling because it explains how an innovation effort launched in 2011 by Cincinnati business leaders gave life to new commerce in ways no one could have predicted at the time.

“Innovation doesn’t happen in straight lines,” former Procter & Gamble Co. CEO Bob McDonald told a Cincinnati USA Regional Chamber crowd in 2011. “What we need to do as companies is identify what those nodes are and provide the capability for connections. That’s what we’re going to try to do through our innovation task force ... We need an air traffic controller to keep these things buzzing between nodes.”

McDonald’s speech marked the debut of the Regional Innovation Task Force, which gave birth to Cintrifuse, which recruited Shigel as a venture-capital specialist in 2012. Canafax attended McDonald's speech and closely followed Cintrifuse's development.

By the time they met at Schigel’s music party, Canafax was well established as a vice president for public affairs at Fidelity Investments Inc. Donabedian enjoyed a stellar reputation as a successful event producer, with a resume that included the Midpoint and Bunbury music festivals and five years of planning concerts and other attractions at Fountain Square.

Canafax credits Jerry Kathman, CEO of the LPK design firm, with sparking his idea for Brandemonium. Kathman gave a 2015 speech about Cincinnati’s history as a branding hub. His thesis: Procter & Gamble, Kroger, Macy’s and all the marketing, research and design firms that serve those companies helped make this region one of the world’s most important centers for creating a brand.

Canafax had heard the speech before. But on the drive back to Fidelity’s Northern Kentucky campus, he had a Eureka moment.

“I had this idea for a South by Southwest for brands,” he said. “I type up four to five paragraphs on it, sent it to Jerry. He said, ‘I think you’re onto something.’ The very first person I called after Jerry was Bill.”

After a few hours of tinkering, Donabedian coined the term “Brandemonium.” Eighteen months later, Cincinnati is sending a message to Madison Avenue, Minneapolis, Chicago and Seattle: We are the center of your universe.

“Cincinnati really is a branding capital,” Donabedian said. “A lot of people don’t know that. We hope they start to understand that.”

Whether that happens will depend on – you guessed it – branding.

“The way that I’ve built brands for almost the last three decades is, you get the product in the hands of consumers and delight them,” said Kirk Perry, president of brand solutions for Google Inc. Perry is a keynote speaker at Brandemonium.

Perry, a former Procter & Gamble executive, planned a trip to Cincinnati because the P&G Alumni Network is hosting its global meeting here this week. Donabedian asked Perry to double dip, with a keynote speech that takes place Wednesday evening.

Perry thinks Brandemonium has a chance of developing a Cannes-like reputation if it consistently delivers value to attendees.

“I go to Cannes every year with Google,” he said. “We have almost every major brand builder in the world there. No one I know comes there for the celebrity. We come because we have a chance to talk about the future, to learn, to light the path out for the next six months or a year.”

Donabedian is trying to deliver value with a first-year lineup that includes ex-P&Gers like Perry, former Global Marketing Officer Jim Stengel and Alex Tosolini, a former senior vice president at P&G who now holds the same post at Kroger. Other keynoters include Seth Godin, a best-selling business author, and OK Go, an alternative rock band with a knack for turning out videos that go viral.

“In the long run, its consistency and quality that’s going to win out,” Donabedian said. “I think our conference lineup, it’s stronger than I thought it was going to be in the first year. We’ve got a tough act to follow.”

Over time, Donabedian hopes for bigger and better lineups along with “hundreds of activations taking over our entire city, cool, outrageous, different things happening everywhere. That’s the vision.”