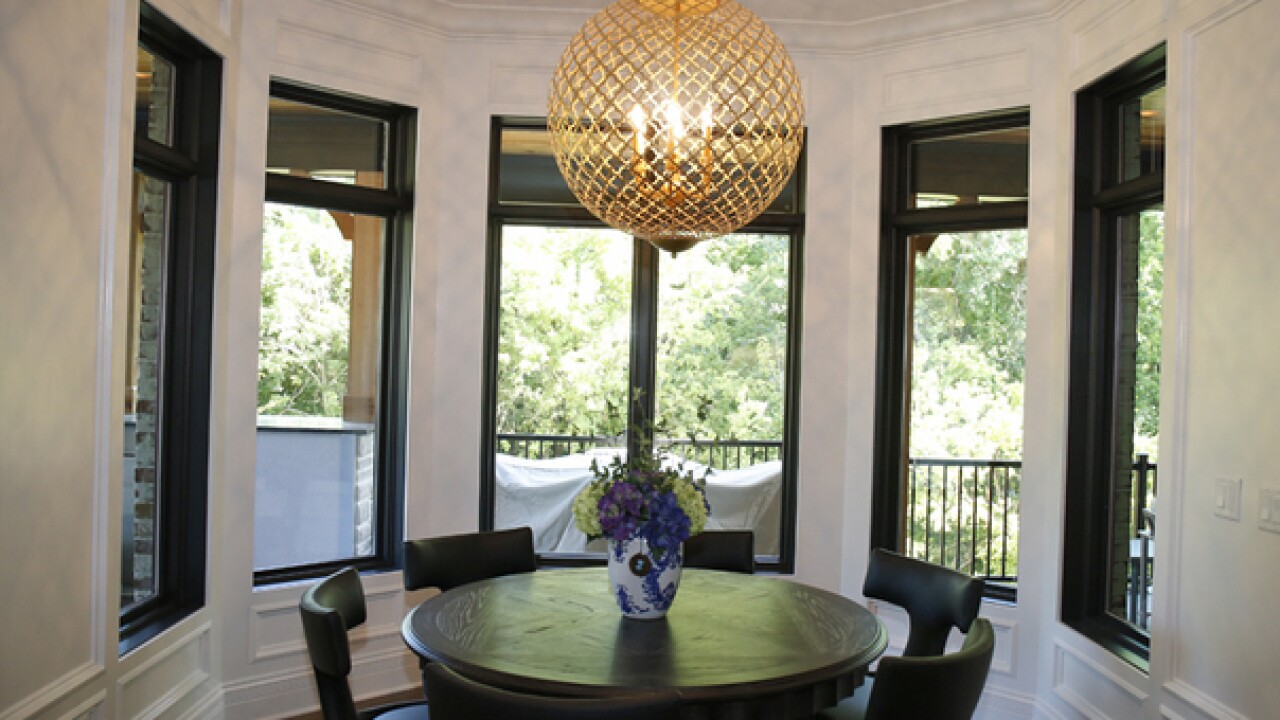 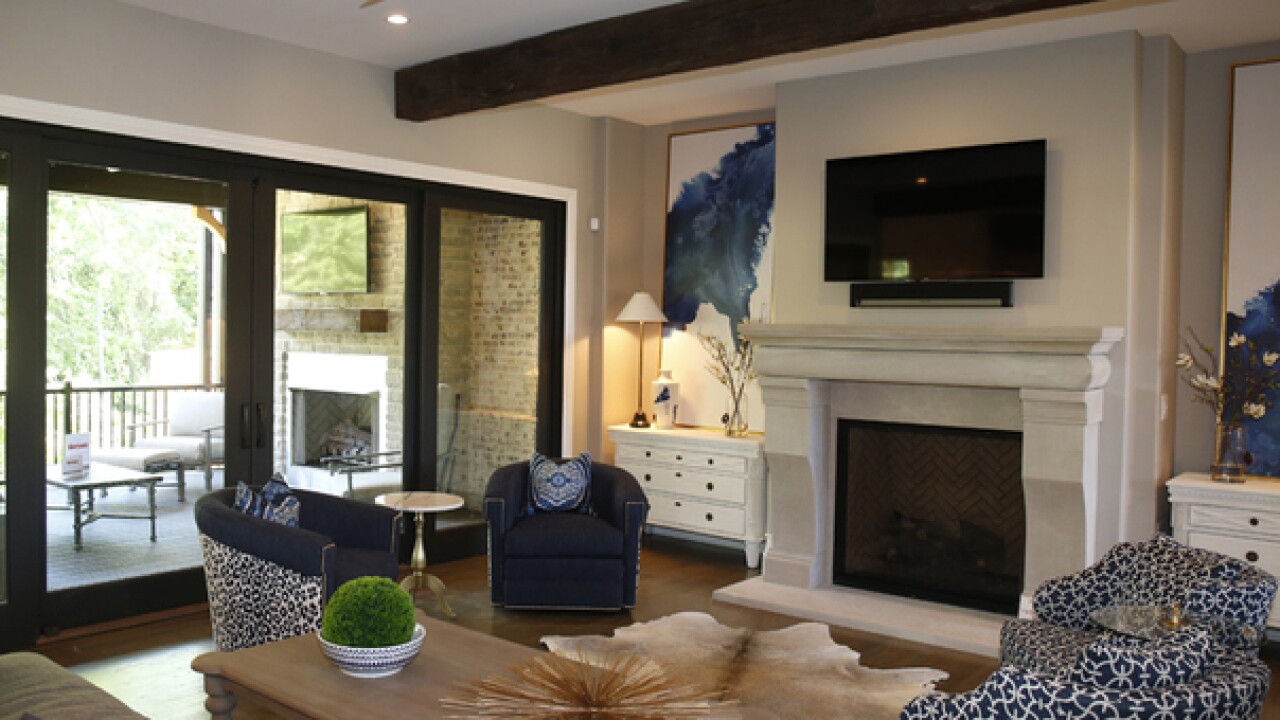 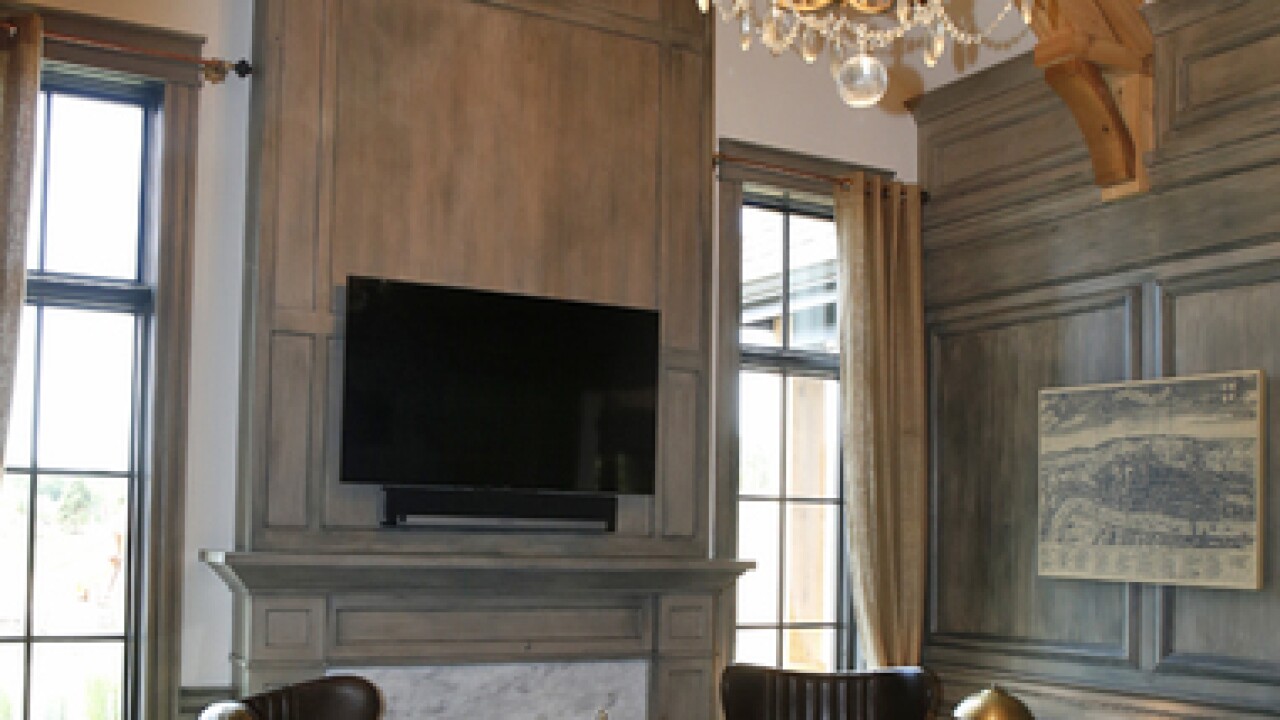 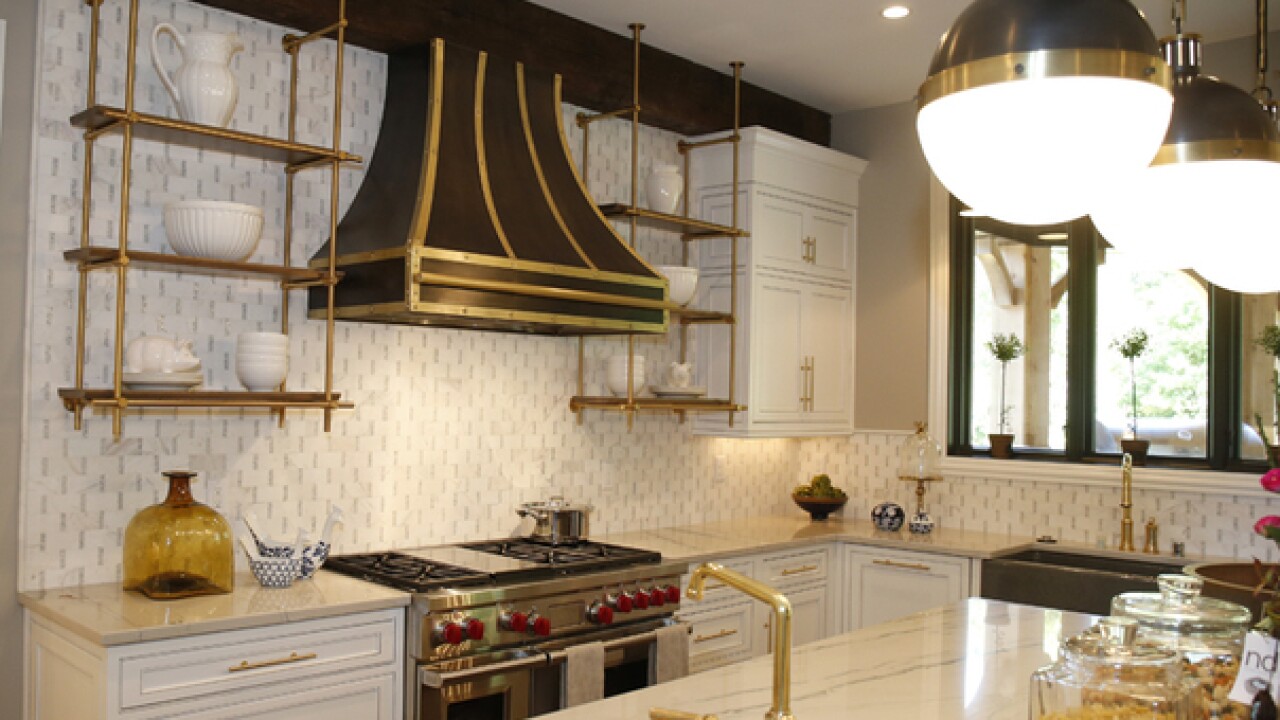 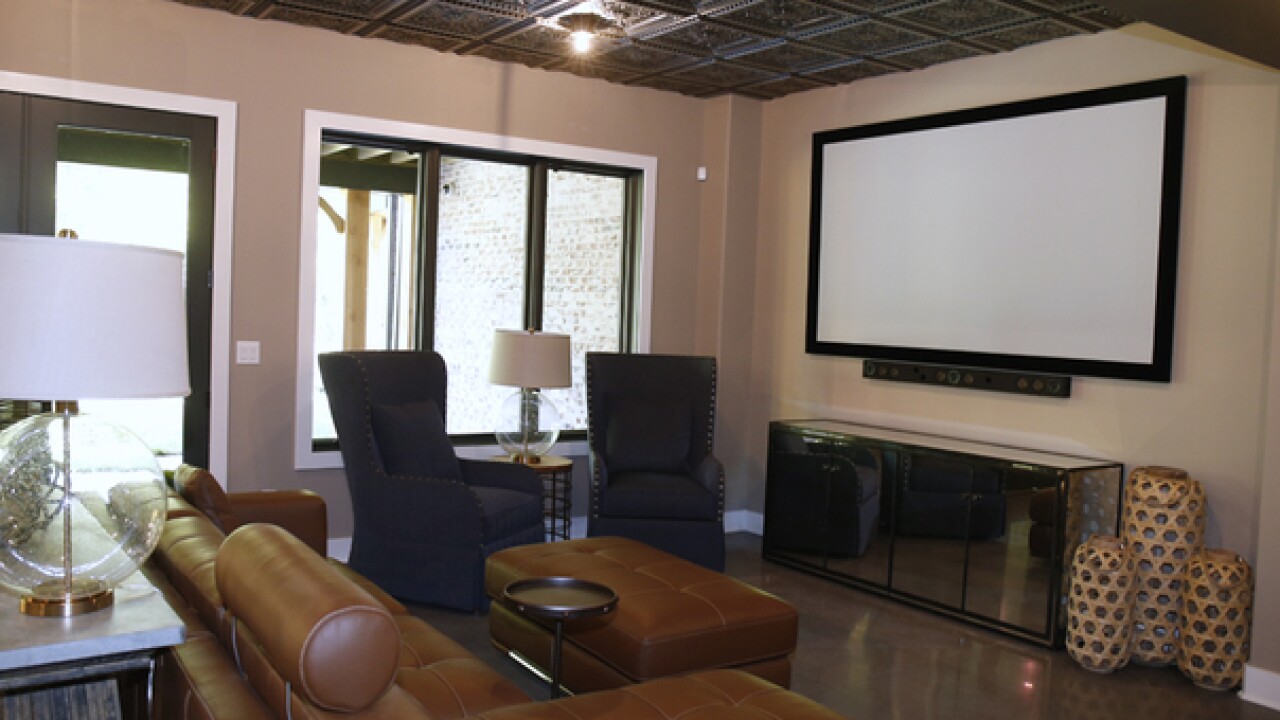 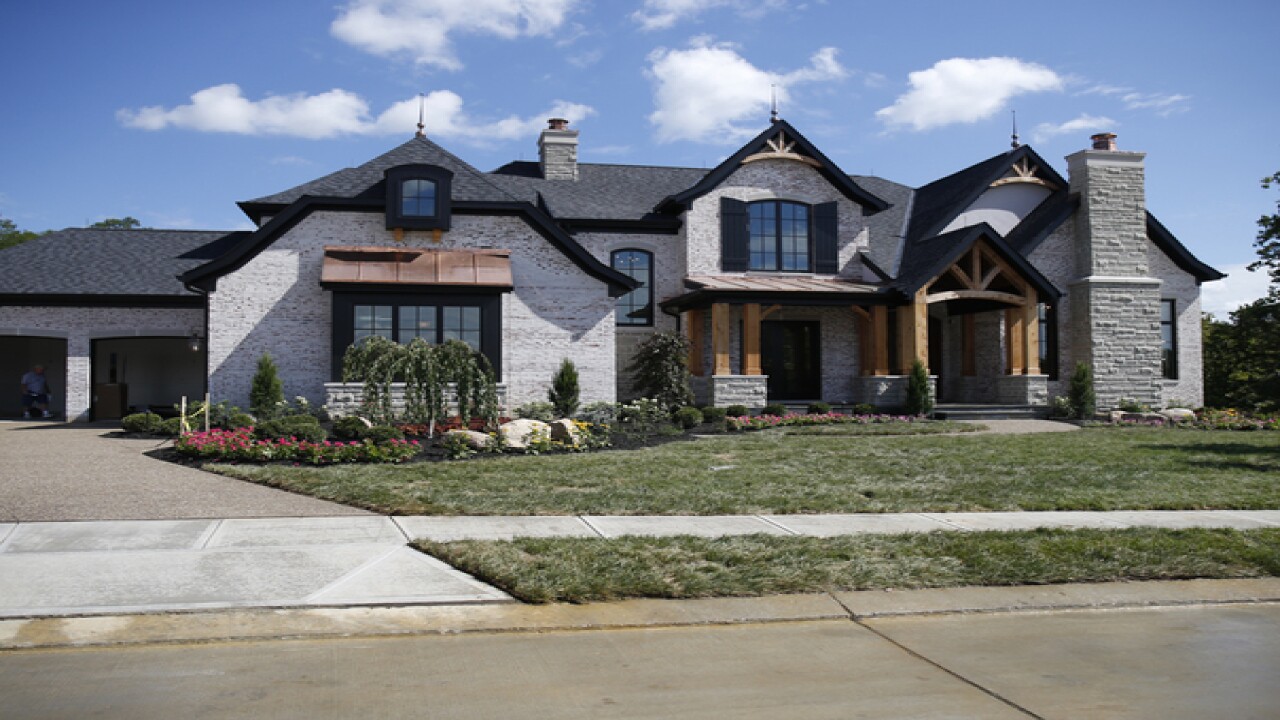 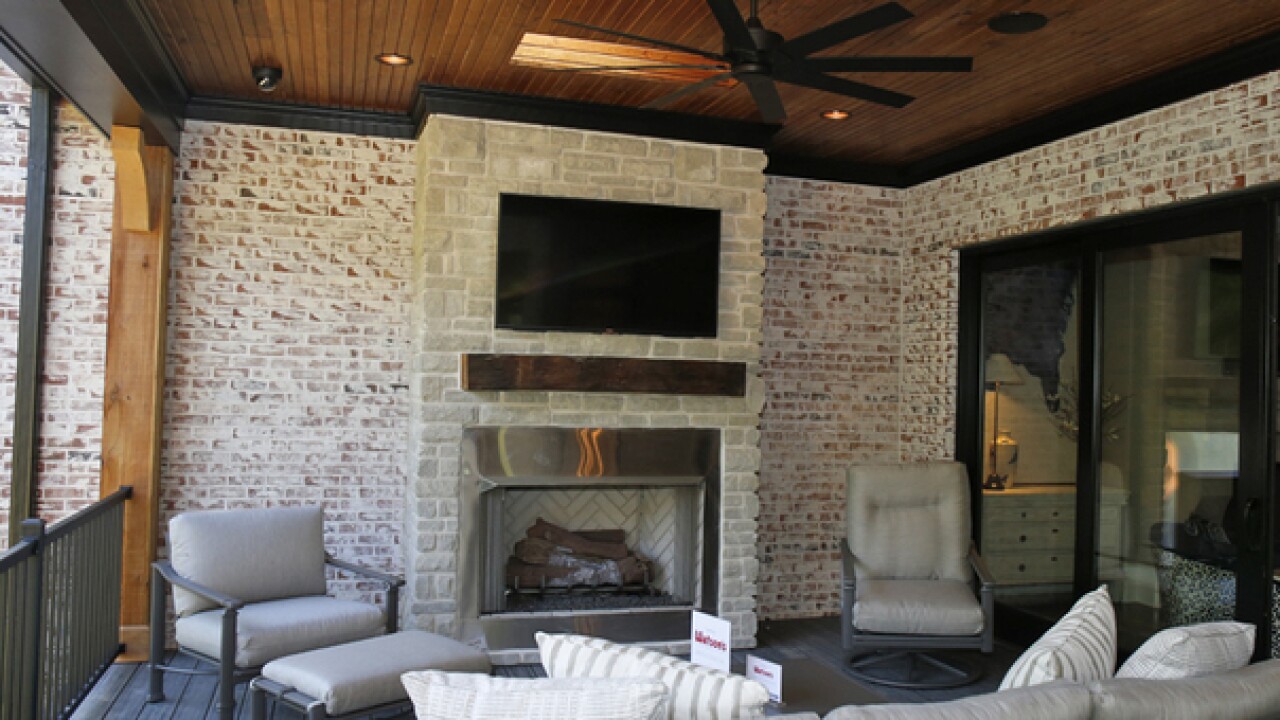 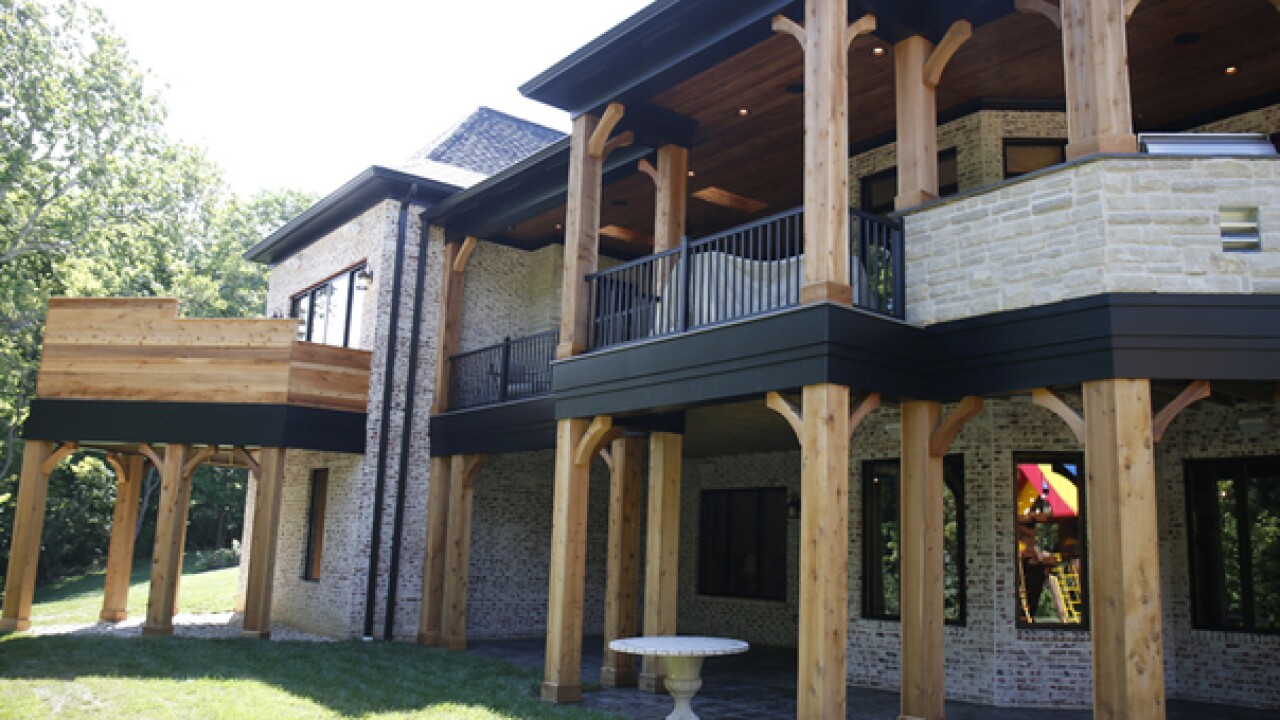 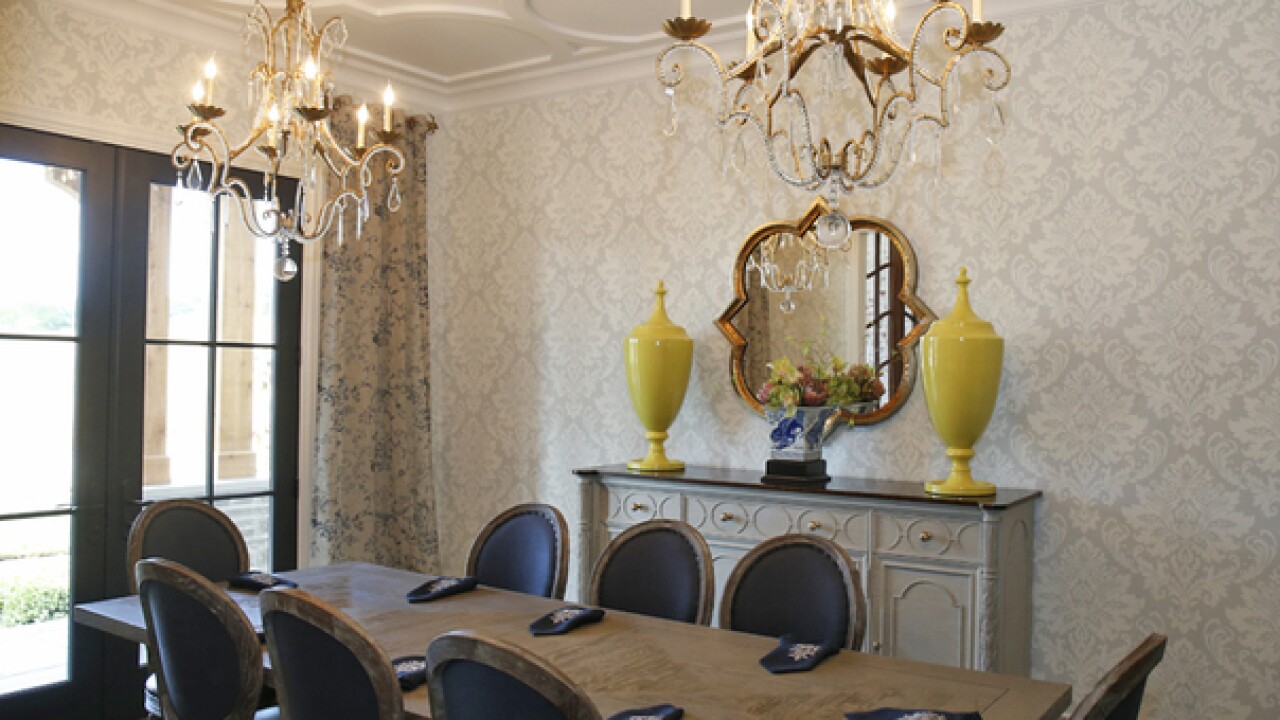 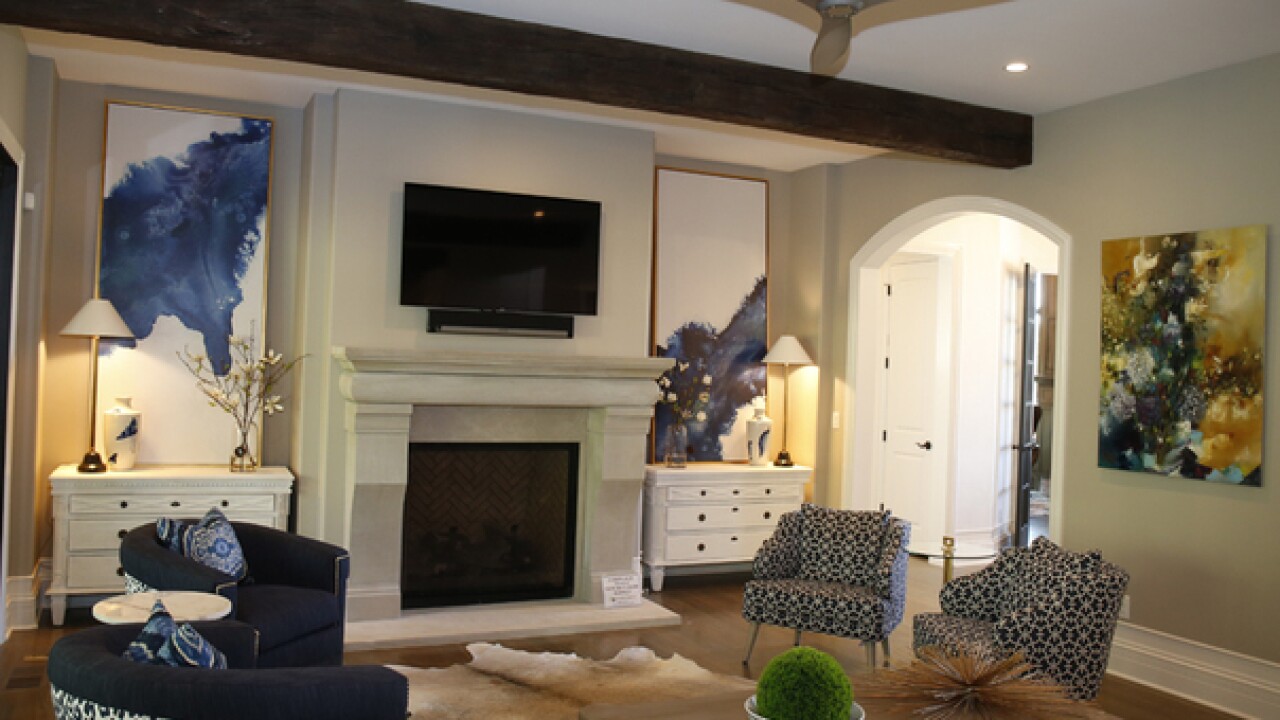 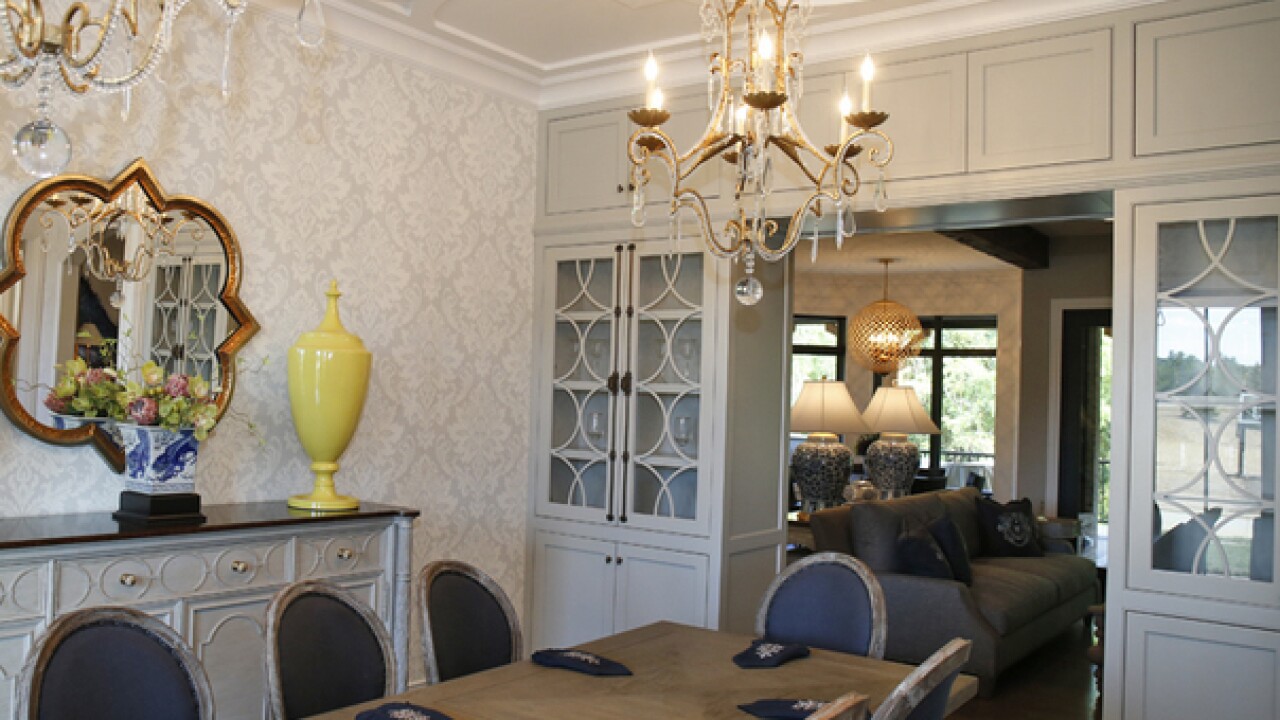 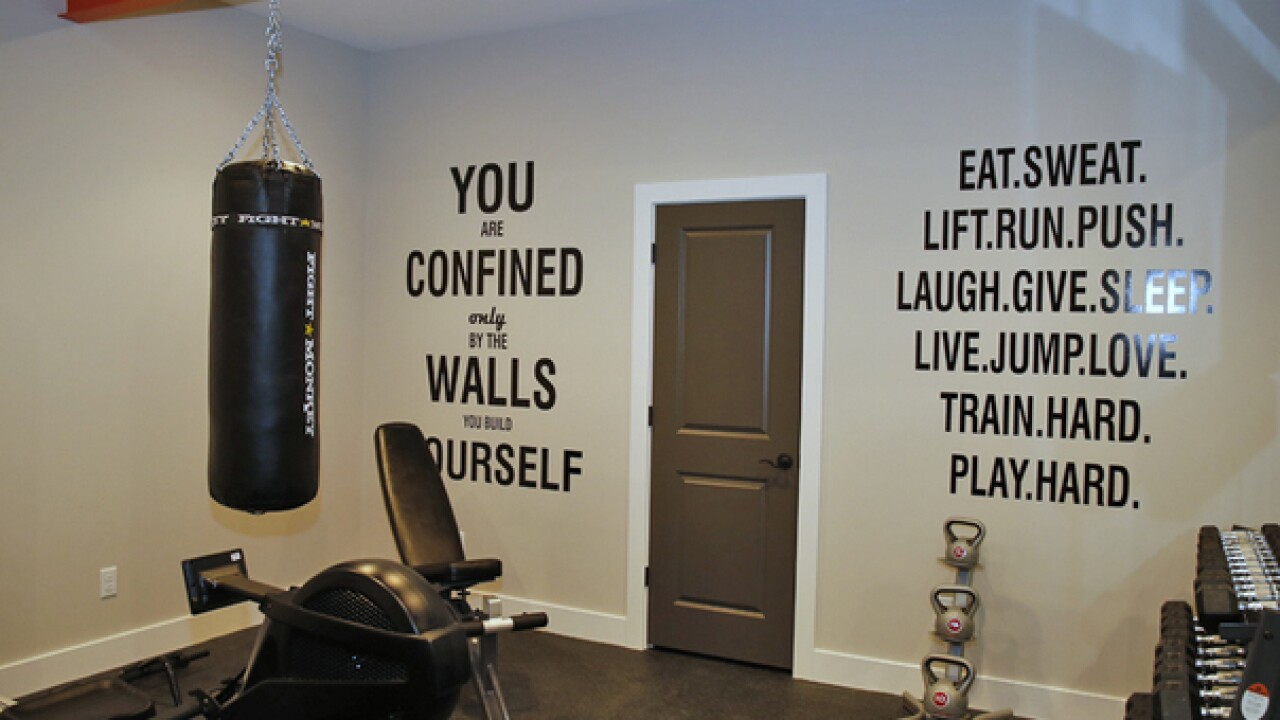 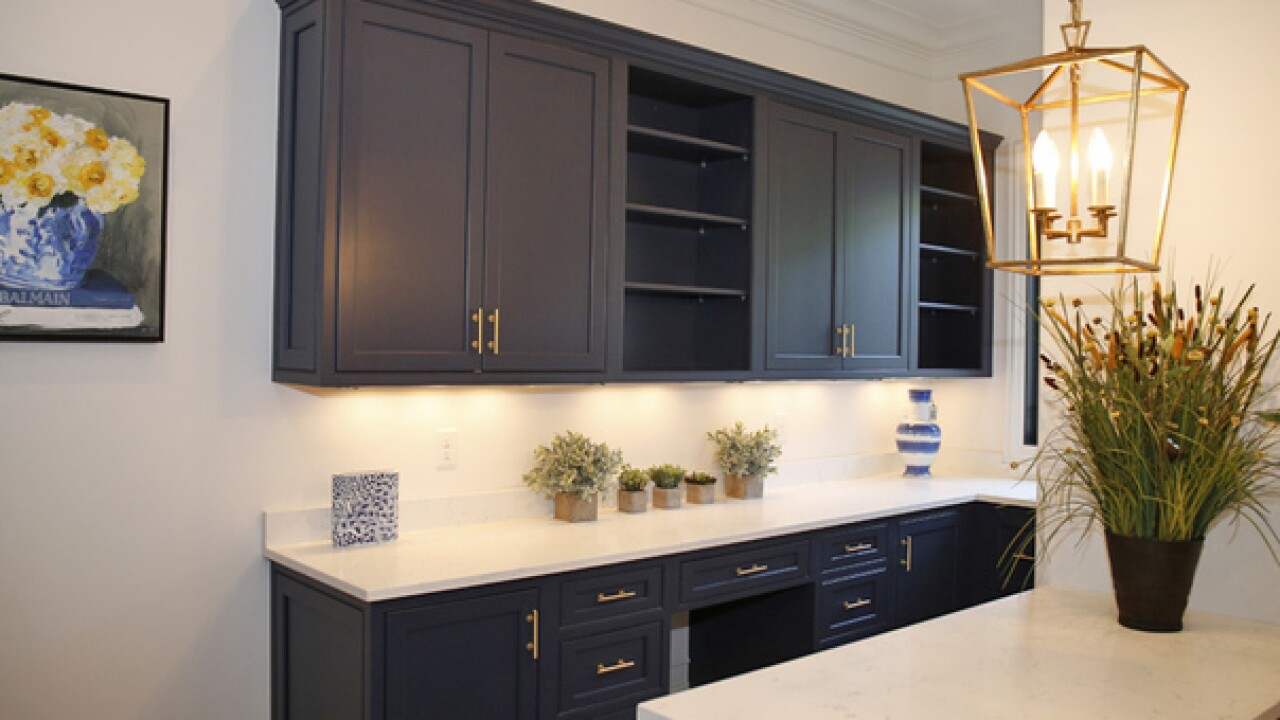 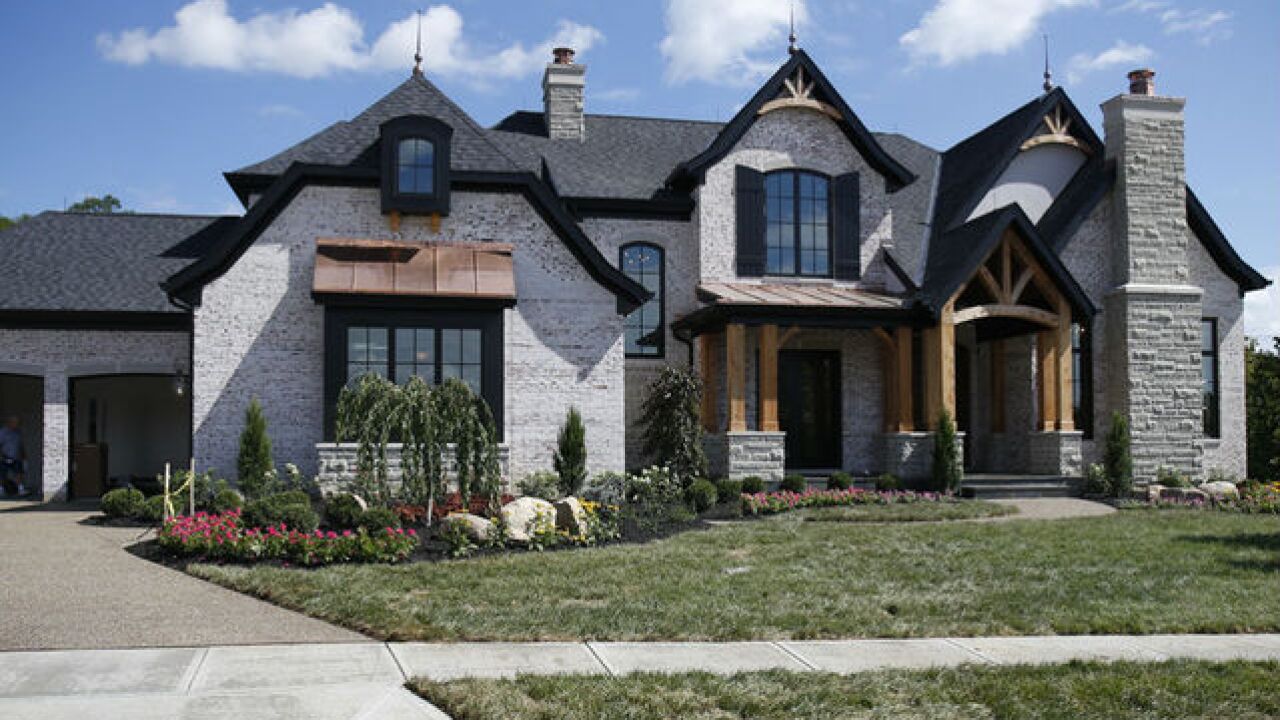 CRESTVIEW HILLS, Ky. -- If you go to HomeFest, the annual new-home showcase hosted by the Home Builders Association of Northern Kentucky Saturday through Aug. 28, be prepared to spend some serious time in Fulton Manor built by Gustin Construction and decorated by Grace Jones of Dwellings on Madison.

The massive first floor, especially its Morocco-themed master bedroom suite, and the industrial-themed lower level of similar size and panache are the kind of spaces that wow and inspire.

The upside is that the three-level, 5,500-square-foot, 5-bedroom, 5½-bathroom home is move-in ready, fully decorated with fancy chandeliers, eye-popping artwork and stylish modern furniture. The downside is it's off the market, having been custom designed for and sold to a young Northern Kentucky family at an undisclosed price.

Fulton Manor is like nothing Gus McKinley has built in his 13-year career in homebuilding. Its owners surprised him by requesting that most of the fixtures, including the 10 shower heads and eight control knobs in the master shower, be brass, a metal that has been out of style for decades. They went with white walls and ceilings throughout.

It might be an unknown term to most, but its impact is memorable. So as not to spoil it for those who will want to see the entire house, we’ve chosen only a handful of Fulton Manor rooms to describe, none on the second floor.

McKinley led us into the mud/laundry room through one of two attached garages that have faux-wood and metal-strapped doors and form a right angle on the house’s west side. Though not large, the laundry space features two sets of stacked washers and dryers, the noise from which can be muffled by closing a pocket door.

The adjacent mudroom -- with 10-foot ceilings like most of the rest of the first floor -- features extensive storage space made of custom cabinets painted charcoal blue. The room includes a bench with cubbies, an office desk and a quartz-topped island with sink. Even the floors are unusual: brick-sized ceramic blocks that look and feel like stone

Visitors step from the mudroom through an 8-foot-high door into the kitchen. Among other eye-catching and surprising features here are a 7-foot-square quartz-topped island, twin dishwashers that open with a knock-knock and flank a trendy Siligrant sink by Blanco, and one of eight refrigerators in the house. Off to the side and facing the backyard and woods beyond is a breakfast nook with a five-bay window, the twin of which is directly below in the recreation room.

This 18-foot vaulted room is to the right as visitors enter Fulton Manor’s foyer from the front door. Eyes are drawn immediately up to two curved, rough-cut cedar beams, each of which is wrapped by three iron straps.

The room’s showstopper, however, is its chandelier: one of just five like it made by Ralph Lauren out of real deer antlers and cut crystal. Those who take their eyes off this dramatic design choice might notice that the marble fireplace’s paneled over-mantel goes all the way up to the ceiling and that the oak floors are old-school herringbone pattern.

Fulton Manor’s master bedroom is centrally located on the first floor and features a tray ceiling with a applied wood pattern like that in the dining room. But it is the suite’s bathroom that drops jaws. A short hallway with his and hers walk-in closets on either side connects the 18-foot-square master to the bathroom through an opening shaped in a Moroccan motif.

Four features stand out here: the glassed-in shower with all the aforementioned brass heads and knobs; the free-standing, white soaking tub with heated head rest; a shabby chic, three-paneled French bakery door backed with mirrors built into the wall behind the tub; and a private home plate-shaped deck that hangs over the backyard and is accessible through sliding glass doors.

HomeFest takes place at the 22-acre Crown Point development on Crestview Hills land that once was a pay lake. It runs Wednesday-Sunday over the next two weeks and includes numerous special events (see schedule at www.hbanky.com).

Participating builders are Gustin, Tim Burks, Fischer and Drees. Four of the six houses featured are sold, and they vary in style from traditional to modern ranch.

Tickets cost $10 on site or $8 in advance at Remke stores. Attendees must catch a shuttle to HomeFest at Crestview Hills Town Center at Dixie Highway (U.S. 25) and Interstate 275.