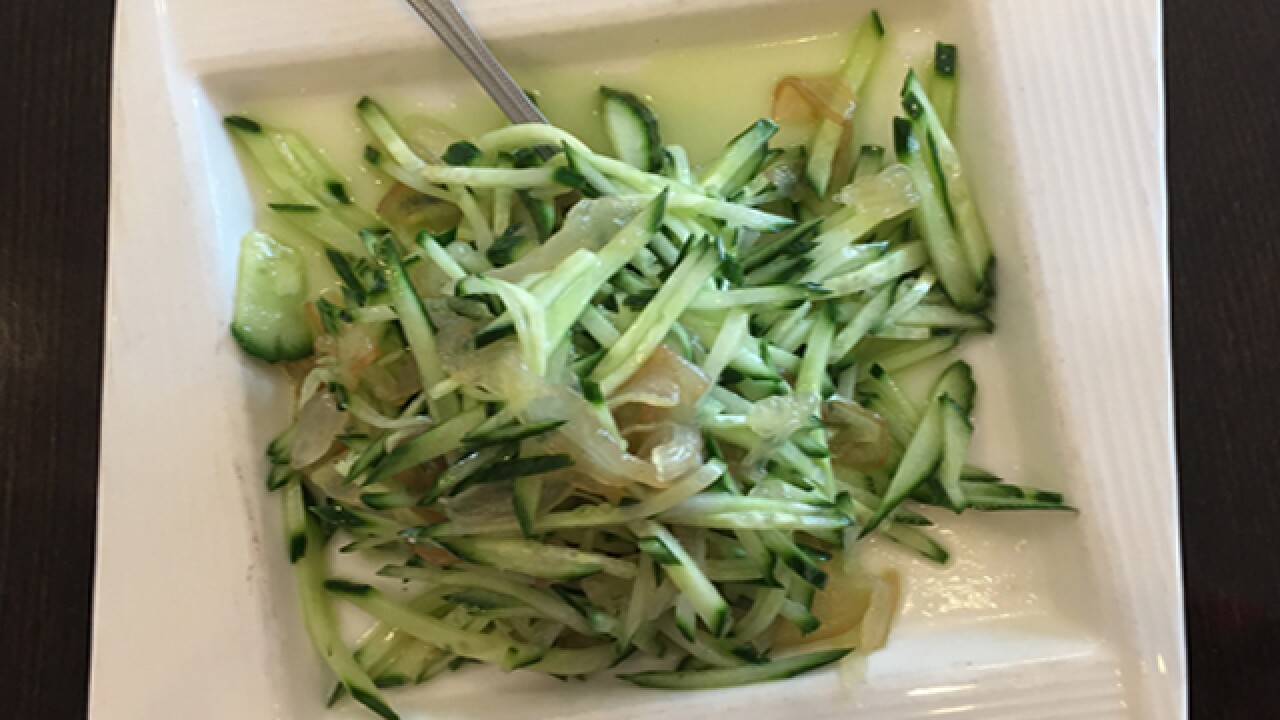 Copyright 2018 Scripps Media, Inc. All rights reserved. This material may not be published, broadcast, rewritten, or redistributed.
Joanne Drilling | WCPO contributor
<p>Sichuan Chili's cucumber and jellyfish salad is a refreshing start to dinner or a light lunch that packs plenty of protein with minimal fat.</p>

Holy grail. For some of us it conjures a much younger Harrison Ford looking excessively fetching in khaki. For others the reference is a bit more biblical, but for our dining purposes we'll stick with the pop-cultural connotation. In this case, it's a bite or a beverage that you just can't imagine living without -- or at least not chatting it up to all your friends.

EVENDALE, Ohio -- Ten years ago, octopus was the exclusive domain of sushi parlors and upscale Italian restaurants in the fair Queen City. Then Dan Wright and Jose Salazar ignited the trend locally, preparing affordable and delicious versions at Abigail Street and Mita's, respectively. Now, you'd be hard pressed to find a hipster who hasn't nibbled a tentacle or two.

What's next on the sustainable seafood horizon?

Allow me to plead the case for jellyfish -- specifically Sichuan Chili's cucumber and jellyfish salad. One bite and it's bound to be your holy grail summer salad of choice.

Owner Ai Lin describes the texture of jellyfish as "chewy and crunchy, almost like a rubber band." She explained that it's mostly adventurous diners who order the salad from the traditional Sichuan menu (as opposed to the American Chinese menu).

"It's very popular in China, especially on the coast where they serve it fresh," she said.

Jellyfish, a staple in many Asian cuisines, is also considered an integral part of Chinese medicine. Rich in iodine and collagen, it's believed to have a cooling effect on the body, reduce phlegm, clear toxins, lower cholesterol and potentially be beneficial for those suffering from rheumatoid arthritis.

Despite vacation horror stories, jellyfish fit for human consumption is processed with salt and alum to neutralize the venom responsible for those painful stings. The body and tentacles are completely dried and sold in shelf-stable packages.

Chefs then soak the jellyfish pieces repeatedly in baths of cold water (Sichuan Chili soaks theirs for 2-3 days) to remove the salt. The jellyfish is chopped into bite-sized pieces before being blanched very quickly in boiling water, then chilled in ice water.

From a foodie perspective, cucumber and jellyfish salad is a refreshing start to dinner or a light lunch that packs plenty of protein with minimal fat. Like octopus, jellyfish is incredibly mild and easily soaks up the flavors surrounding it. In Sichuan Chili's case, those flavors are sesame oil, scallion oil, cucumber, and scallions. The subtle chew of the jellyfish combined with the crunch of the cold cucumber is a fantastic foil for some of Sichuan Chili's fierier dishes, like the fish with chili oil, mapo tofu or sizzling lamb.

If you're ready to push the boundaries on your next Chinese takeout order, start the summer off right with a cucumber and jellyfish salad. Think of it as an edible "slip and slide" and introduce your friends to the next frontier in cold seafood salads.