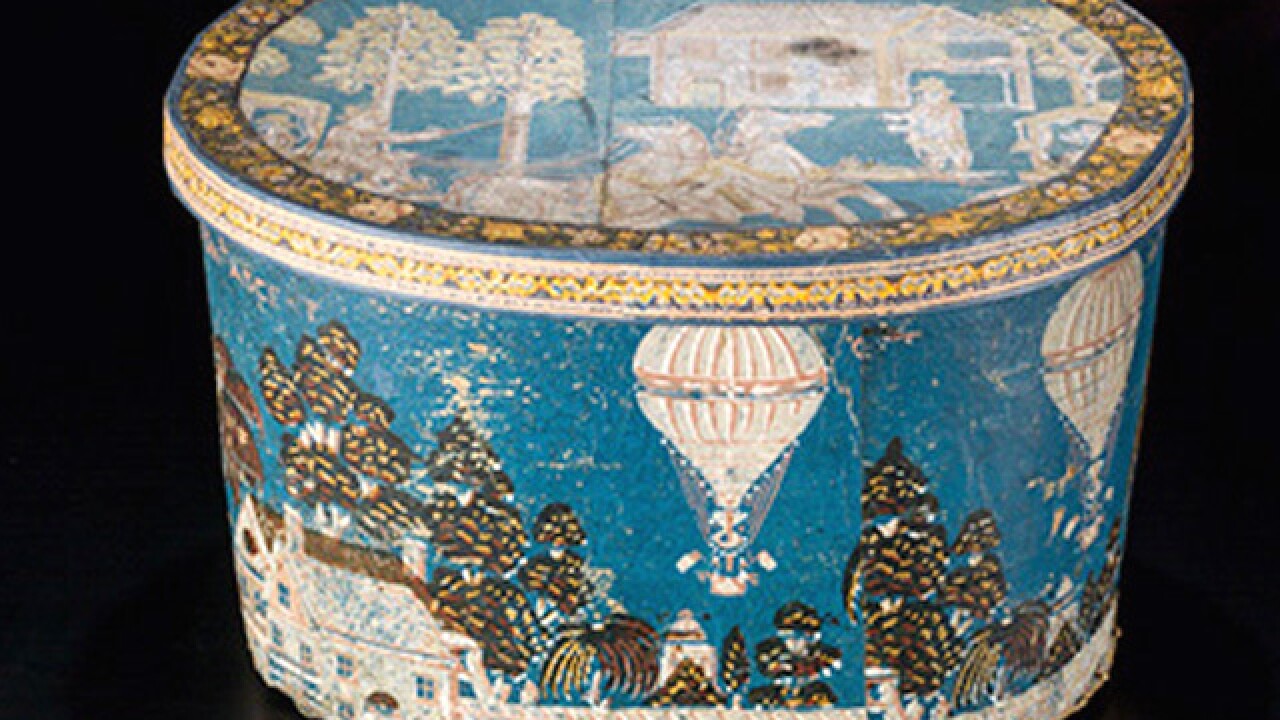 <p>This commemorative bandbox celebrating Richard Clayton's balloon ascent from Cincinnati in the Spirit of the West was part of a Cincinnati Art Museum show in 2014.</p> 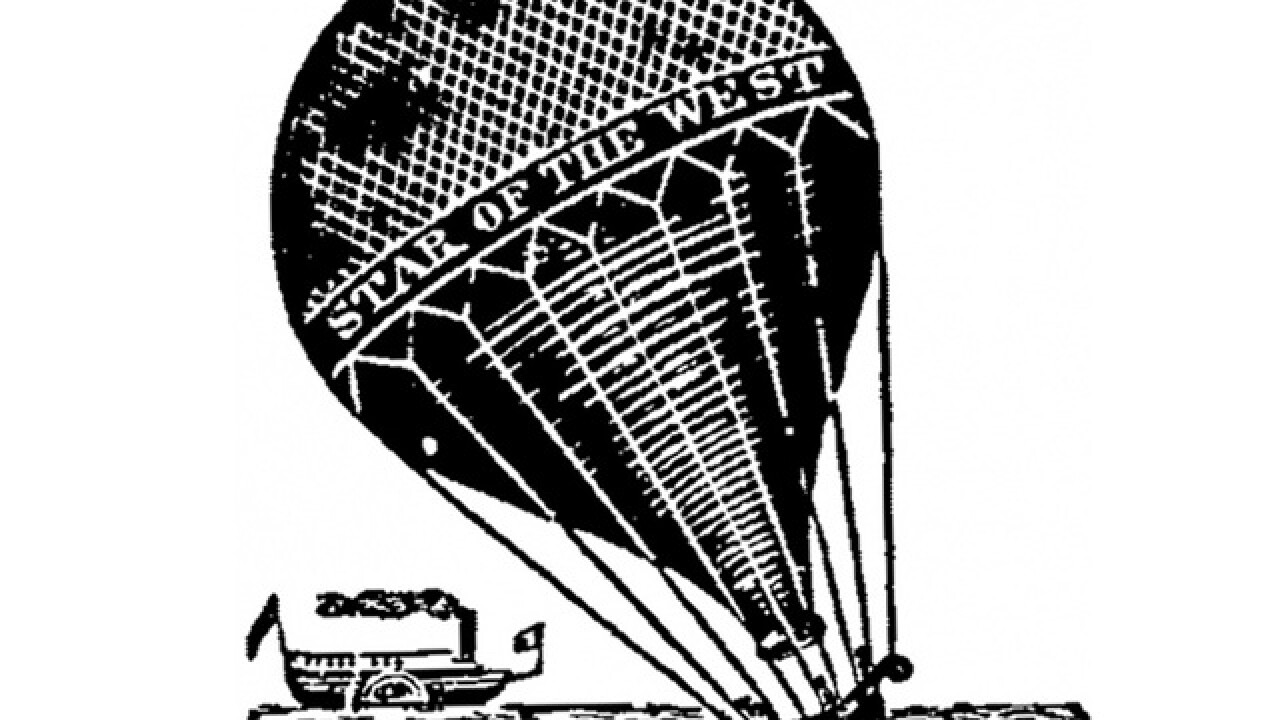 Richard Clayton became a national and international sensation 181 years ago when he flew in his balloon, Star of the West, for 9½ hours and 350 miles from downtown Cincinnati to the mountains of what was then Virginia.

It was a time and distance world record for the English watchmaker and silversmith, known as the first person to see Cincinnati from the sky, and his journey was quite a spectacle.

Balloonists, or “aeronauts” as they were called in 1835, were of two persuasions: scientists and entertainers. Clayton was the latter. He was P.T. Barnum before many knew who P.T. Barnum was.

Clayton was 28 when he made his famous flight. He manufactured and sold watches and silver wares at Clayton’s Wholesale House on the southeast corner of Second and Sycamore streets. He advertised his pending flight in Cincinnati newspapers, offering to sell tickets through local hotels to those who desired to watch his “grand aerial voyage, in the most splendid balloon in the U.S.”

Tickets to the inaugural launch of the 50-foot-high Star of the West from a Court Street amphitheater between Elm and Race streets cost 50 cents (about $11.50 today).

What a sight it must have been.

Although the balloon could carry 1,000 pounds, Clayton boarded it with a single passenger: a 20-pound dog. The Star of the West lifted off from Court Street at 5 p.m. on April 8, 1835, and floated to the altitude of about a mile before Clayton — forever the showman — tossed the dog overboard. It reportedly parachuted safely back to the city.

How far and exactly where Clayton intended to fly his hydrogen gas-fueled balloon isn’t known — probably as far as the wind and the balloon’s 4,500 square feet of sturdy silk could take him. That turned out to be a 3,000-foot mountain in Virginia, a virtually uninhabited place called Keeney’s Knob (near present-day Alderson, West Virginia.).

The Star of the West landed safely in a tree at roughly 2:30 a.m. on April 9, 1835. Clayton used ropes to climb down and fell asleep at the base of the tree, according to the Cincinnati Aviation Heritage Society & Museum. He climbed to the top of the knob in the morning. He must have thought, “Where there is a river, there is civilization,” and he set out to find help.

He got it. Locals helped Clayton search for his slightly damaged balloon and found it on the second day of their search. They packaged the Star up and took it and Clayton to the Ohio River, where he boarded a steamboat back downriver to his home. Cincinnatians greeted their hero with great enthusiasm.

The Aviation Heritage page reads: “It is said the news of the balloonist spread rapidly, and for the next day or two people came for miles to view this strange unheard of monster of the air. Many thought it impossible to make the trip from Cincinnati in nine hours, and condemned the whole story as a fake.”

It was no fake. It was the beginning of an aeronautical career that Clayton, the great balloonist of the West, milked for at least 10 years before returning full-time to his business, which he had aptly renamed Clayton’s Balloon Store.

Few details of Clayton’s personal life can be found on Internet history sites. He was born in England in 1807 and saw several early balloon flights there as a boy. The aeronautical technology first introduced successfully by French aeronauts in 1783 fascinated the young Clayton.

The hot-air balloon craze came to America in 1793, and that year a balloon flight was witnessed by President George Washington. Clayton didn’t arrive in the United States until the early 1830s, choosing the western outpost of Cincinnati as his home.

There were a number of balloonists in the Northeast at that time, and Clayton, by then in his 20s but still fascinated with flight, yearned to one-up them. He built the Star of the West.

He followed up his record flight with several others in 1835. Gusty winds knocked out his May 13 flight, but Clayton landed on a Cincinnati rooftop, safe in his balloon’s basket. Its silk, however, was damaged beyond repair.

On July 4, in a new balloon financed by fans and friends, Clayton delivered the first unofficial air mail package in United States history with a flight aimed at the Atlantic Ocean. Freezing temperatures and leaks in his silk balloon, however, forced him to abort the flight. He landed safely and deposited the mail after walking to a post office south of Chillicothe in Waverly, Ohio.

Another 1835 flight ended when his balloon exploded, but its silk acted as a parachute, and Clayton was unharmed.

Pals With the Press

Clayton made about a dozen other flights in his career as a balloonist, taking off from cities such as New Orleans, Pittsburgh, Lexington and Louisville. The press covered his exploits, and he often wrote letters to editors that they published.

Being the first person to see Louisville from the air, Clayton described to the press what he saw shortly after taking off from that city on Aug. 16, 1837:

“My situation now was truly delightful, I could sit at ease and view the city and its thousands of inhabitants who were collected in groups in streets and on the tops of buildings. I could see the ferry boat and other steamboats puffing along, and I could clearly see and hear the Falls of the Ohio River.”

An 1837 letter from Clayton to the Pittsburgh Gazette shows his keen sense of safety. He wrote it after aborting his short flight from Pittsburgh and landing at 7:30 a.m. on Sept. 12, 1837: “I should have continued in the atmosphere during the night, but the cold and damp were so severe that I was afraid of the fever and ague (shivering).”

Possibly the last published account of a Clayton flight from Cincinnati — his first after a two-year hiatus — appeared June 5, 1844, in the Daily Enquirer and Message:

“I rose to the altitude of a mile, passed in a north east direction, floated over a richly cultivated country, interspersed with numerous towns and villages, and, after remaining in the air two hours, landed without injuring myself or the balloon, near the farm of Mr. E. Ogletree, of Anderson’s Fork, Clinton County, eight miles from Wilmington, twelve from Xenia, and about sixty miles from Cincinnati.”

Clayton owned Somerset Hall, an 1845 mansion in Ludlow, Kentucky, that earned state historic landmark status in 2014. The 1860 census listed him as a retired merchant living with a 15-year-girl, possibly his daughter, named Charlotte. No wife was listed, but his personal and real estate wealth was estimated to be $100,000 (about $2.6 million today).

What became of Clayton after that census is unclear. A Craftsperson Files document on ancestry.com lists Clayton as being born in 1811 — not 1807 as the census showed — and as dying in 1878. But Clayton does not appear in the 1870 census, and Internet searches for his gravesite produced no hits.

Louis Daguerre’s photographic technique, first made available to the public in 1839, likely arrived in Cincinnati too late for anyone to use to capture an image of Clayton or his balloons. But the West Virginians from where Clayton’s historical flight ended on Keeney’s Knob have not forgotten Clayton. A small, unincorporated community in Summers County bears his name: Clayton, West Virginia.

An indication of Clayton’s lost fame lives on as well in an occasional watch or silver piece that pops up in online auctions. There also are treasured antiques that bear the image of the Star of the West in flight, two of which, a commemorative bandbox and stoneware jug, the Cincinnati Art Museum exhibited in 2014.