Jimmie Dodd really was the leader of the club 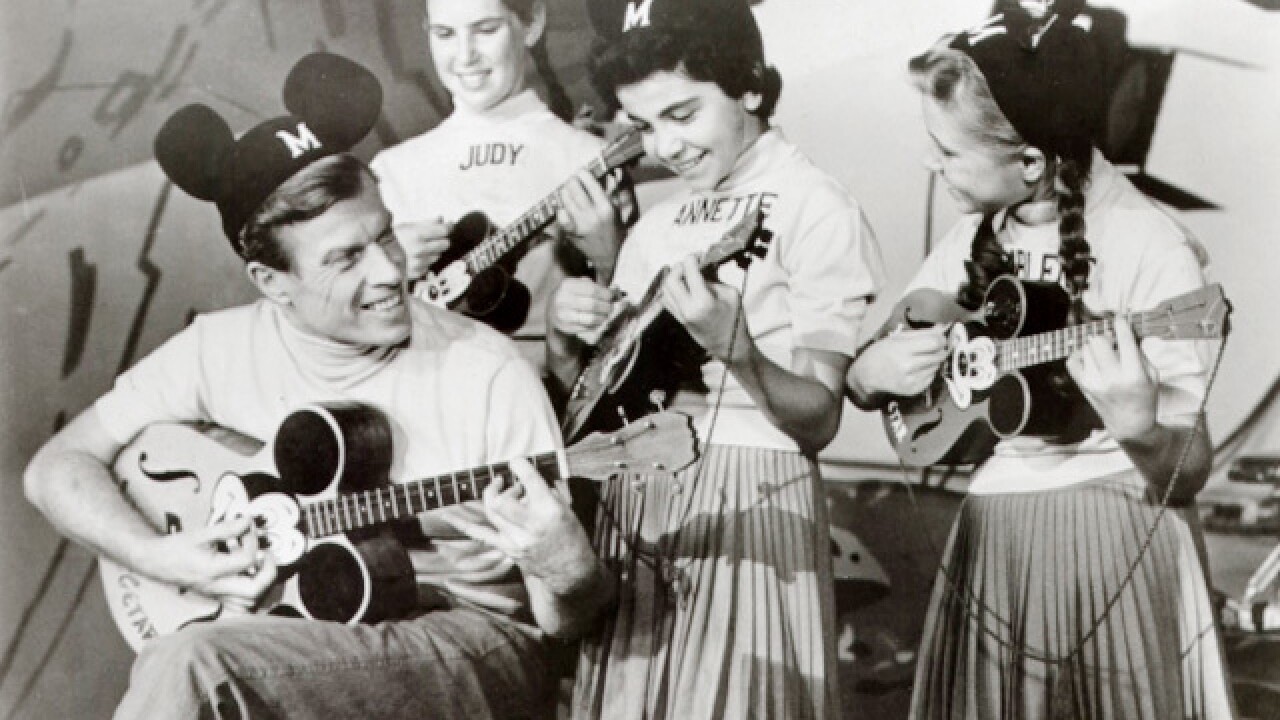 <p>Jimmie Dodd leads a "Mouse-getar Music Lesson" on an episode of the "Mickey Mouse Club." The show ran live for five seasons, from 1955 through 1959.</p>

Had 1927 Withrow High School graduate Jimmie Dodd been a less humble or more accurate songwriter, he might have ended his famous introduction to the marching theme song of the 1950s “Mickey Mouse Club” television show with “J-I-M … M-I-E … D-O-D-and-D.”

That’s because Jimmie Dodd really was the leader of the club. He was its songwriter, its singer, its host and its soul — the man Walt Disney rubber-stamped to emcee his variety show (1955-59) for kids after hearing just one composition by the Cincinnatian: “The Pencil Song.”

Dodd’s ride with the Mouseketeers lasted 10 years (1955-64), five on a live show on weekdays; two as a Disney promoter and leader of two live Mouse Club tours in Australia, and two as host of syndicated “Mouse Club” reruns. It was a grand ride for a man described as quiet, genuine and sincere in a tribute online at OriginalMMC.com.

Within months of the end of that ride, the leader of the club died while producing the first episodes of “Jimmie Dodd’s Aloha Time,” a new show for kids being shot in Honolulu. Secrecy surrounding his death at age 54 was so tight that its cause was unclear. Sources said it was either a heart attack, staph infection or cancer.

No matter how he died, Dodd left quite a legacy: 332 episodes of the “Mickey Mouse Club”; 77 bit and mostly uncredited parts in Hollywood movies; numerous Christian music recordings and radio and TV appearances, and 525 songs, including “Washington,” the official song of the District of Columbia. The song was chosen from 3,628 contest entries received by the Washington Post.

Dodd had many brushes with greatness through his career. He danced in classes with a teenaged Tyrone Power at Cincinnati’s Shouster Martin School of Dramatic Arts. As a singer, he toured with Louis Prima, sang with Roy Rogers and entertained World War II troops in North Africa, Southeast Asia and the Aleutians. As an actor, he appeared in movies with the likes of Ronald Reagan, Judy Garland, Mickey Rooney and Fred Astaire, and he took a blood bullet to the forehead from John Wayne in “Flying Tigers,” a scene that required seven takes.

Jimmie was born Ivan Wesley Dodd in Cincinnati on March 28, 1910. He started going by James as a boy and, at age 39, changed his name legally. His parents — John Wesley Dodd and Luella Thede — shared a modest life in Evanston near where Interstate 71 cuts through the neighborhood today. Dodd’s father worked in a music store, played the violin, sang and performed on WLW-AM radio for 10 years.

He and his wife, a stenographer, divorced when Jimmie was a boy but lived doors from each other for years. With easy access to instruments through his father, Dodd developed a love for music as a boy. He also witnessed what it took to be a good salesman by watching his father work, a skill he would use to build his career as an entertainer.

The 1920 census shows Luella and Jimmie lived with her two older sisters, Emma and Alma, on Clarion Avenue. She married Alfred Brauer when Jimmie was 12, but she was listed as widowed by 1930.

At Withrow, Dodd was known as “Red.” His 1927 senior-class yearbook noted the musical young man was a member of the Astronomy Club and was known for being “jauntily decked.” Dodd then attended the University of Cincinnati and the Cincinnati Conservatory of Music for three years, where he played banjo in a band and began getting gigs to sing on the radio.

After chasing work in St. Petersburg, Fla., and Nashville, where he attended Vanderbilt University, Dodd and his mother moved to Los Angeles. He found work in nightclubs and landed his first acting job in 1940’s “Those Were the Days!” starring William Holden.

By then, Luella had taken in a boarder, Cincinnati-born Ruth Wolfenden. She graduated from Harrison High School, more than 20 miles from Dodd’s Withrow, but it is possible the two had met through family or social circles.

Dodd and Wolfenden became a couple when Dodd returned to Los Angeles after touring with the Louis Prima Orchestra. They were married in 1940 and became a professional entertaining team. Ruth used the last name Carrell, possibly so the troops they sang for would think she was a single woman.

According to OriginalMMC, Dodd and Carrell struggled financially in the years before his “Mouse Club” days. Dodd was hospitalized with a “grave illness” in 1951 and took months to recover. Nevertheless, they cracked the TV scene with small roles in 1952, the year both became born-again Christians.

Dodd and Carrell co-wrote many songs for the “Mickey Mouse Club,” but her only big onscreen scene was in a production called “Cooking with Minnie Mouse.” “Do What the Good Book Says” is considered their signature song.

Jimmie Dodd left his imprint on many things besides the songs he composed for the young Mouseketeers. The uplifting remarks — spiritual but non-denominational life lessons — that he made at the end of each show became known as Doddisms. One of his regular singing segments was called “Proverbs, Proverbs, They’re so True.” He played them on his “Mousegetar” while wearing Mouske-ears.

Despite his movie, radio, recording and touring career, Dodd will be remembered as the smiling, cheery, always congenial host of the “Mickey Mouse Club.”

“It was Mickey’s club and Walt’s studio, but it was Jimmie’s show,” reads an OriginalMMC website article titled “The Leader of the Club.” “He was the indispensable cast member who tied everything together, day to day, season to season.”

The producers of “Jimmie Dodd’s Aloha Time” asked Carrell to keep his demise secret for a month so they could finish the show. It never aired. Carrell returned to Los Angeles, married an accountant four years later and left show business for good. She died in 1992 at age 82.

Dodd is buried at Forest Lawn Memorial Park in Los Angeles; Carrell is buried beside him. Her marker quotes Proverbs 31:11: “The heart of her husband doth safely trust her.”

Jennifer Armstrong’s 2010 book “Why? Because We Still Like You: An Oral History of the ‘Mickey Mouse Club’” chronicles behind-the-scenes activities of the Mouseketeers and the man who wrote the “Mickey Mouse Club March,” Jimmie Dodd. In her closing remarks, Armstrong wrote:

“There could have been no surer way to mark the official ending of the ‘Mickey Mouse Club’ era than the death of the Mousketeers’ folksy, Christian hero, Jimmie Dodd. As (former Mousketeer and future ‘My Three Sons’ star Don Grady) says, ‘We represented wholesomeness. Those were the times. We represented the ’50s, the wholesomeness we thought most kids were aspiring to.’ ”

Surely, Grady included Jimmie Dodd in that “we.”