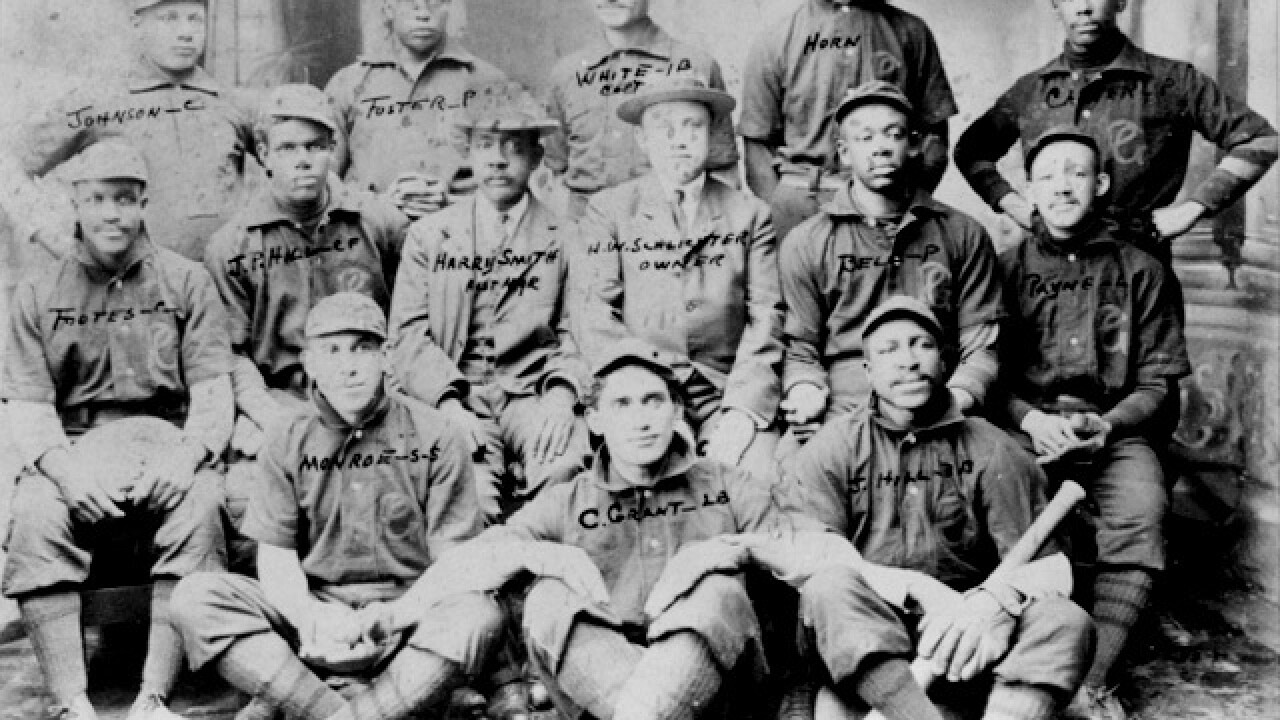 <p>After his failure to pass as an Indian and crack into the major leagues, Charlie Grant, front row second from right, spent 15 years with barnstorming teams such as this one in Philadelphia. (Public domain photo)</p>

Cincinnatian Charlie Grant was one train ride away from becoming the first African-American to play major league baseball — 115 years ago this month.

Had Baltimore Orioles future Hall-of-Famer John McGraw gotten away with his scheme to pass the light-skinned Grant off as the American Indian “Tokohama” during spring training in 1901, Jackie Robinson would have gone down as the second black to play in “the bigs” after the “color line” was drawn.

To be honest, Grant was no Jackie Robinson. They both played second base and were slick fielders and fast runners, but Grant didn’t have Robinson’s bat or his dashing good looks. Nevertheless, his story — though mostly forgotten — is compelling.

First there’s the fuzziness of his exact date of birth in Cincinnati to Charles Grant Jr. and Mary Grant. The 1880 census lists it as 1876. Grant’s draft registration papers read 1877. His marker at Spring Grove Cemetery says he was born in 1874.

The family lived their early days in Winton Place, now Spring Grove Village. Grant’s father was a hostler, a defunct term for a horse groomsman or stableman. Grant learned to play baseball in the Queen City and would end his career there playing for the Cincinnati Stars. The right-hander grew to be 5-feet-8-inches tall and weigh a solid 175 pounds. Unsubstantiated reports have it that he was a pitcher and invented the screwball before settling in as a second baseman.

Grant started his career in 1896 with the Page Fence Giants of Adrian, Mich., one of the first professional barnstorming black teams. How they got around the Midwest was part of their appeal and success, according to Brian McKenna, a biographer for the Society of American Baseball Research.

In his biography of Grant on the SABR website, McKenna wrote that, according to the Negro League Baseball Players Association, the Giants “traveled around the country in a custom-made railroad car which featured sleeping quarters, a cook and a porter.” The players drummed up support by riding bicycles around towns while dressed in full uniform.

A little more than 10 years into his two-decade career, Grant married Cincinnati telephone operator Eva May Irvin, but they divorced sometime between 1911 and 1918, according to McKenna.

After winning several championships in the days before the Negro League organized formally, Grant retired in 1916 and returned to Cincinnati to live with his parents at 802 Blair Ave. in Avondale.

Both he and his father, census records show, worked as apartment building janitors, and it was in front of the one in which he lived on July 9, 1932, that Grant was killed.

Wrote McKenna: “Charles Grant was sitting and relaxing on the sidewalk outside his apartment when a passing motorist, whose tire blew, jumped the curb and slammed into the ex-ballplayer.”

Grant was buried in Section 68, Lot 417 at Spring Grove Cemetery. His simple stone marker includes his name, his birth and death years and two crossed baseball bats with balls set in the top and bottom angles.

Grant caught the eye of John McGraw, who was one of the biggest-name managers in the brand new American League. In those days, there was a lot of “tampering and contract jumping,” McKenna wrote, and managers like McGraw pulled out all the stops to put together the best teams possible.

The resorts in Hot Springs, Ark., were a big draw for white players and managers during the off season. Many African-American players worked in the town’s hotels and bathhouses, according to McKenna. Grant was known to have been a bell hop in the Eastman Hotel and was part of a general player tryout held on the hotel’s lawn in early March 1901.

The black players, Grant among them, organized their own games and drew the interest of ruthless recruiters like McGraw. Grant, with his light skin and high cheekbones, as well as his fielding and base-running ability, caught McGraw’s eye, and the scheme to pass Grant off as an Indian was hatched.

Baseball banned blacks, but not Indians, in March 1901, and so McGraw began touting his new find as “Tokohama,” a Cherokee Indian. His plan gained momentum in late March — possibly too much. Baseball writers, some of whom had seen Grant play for black teams in such cities as Chicago, were dubious and shared their concerns in newspaper columns from Baltimore to Chicago.

Nevertheless, several Oriole players, Grant among them, were due to board a train from Hot Springs to Baltimore on March 29, 1901. But McGraw’s ruse had been revealed. Grant never got on that train. Instead, he boarded one to Chicago, where he began to play with the Chicago Union Giants on April 6, 1901.

The Baltimore Orioles posted a 68-65 record and finished fifth in the American League’s inaugural 1901 season, 13½ games behind the champion Chicago White Stockings. The Windy City, embraced “Our boy, Charlie Grant” upon his return, McKenna wrote, but the second baseman defected to Philadelphia and played out his successful career with the Giants there and on several lower-level teams that included the Cincinnati Stars.

His age was never an issue in his career, but fans' fascination with his stint as “Tokohama” was. Wrote McKenna:

“This is an early instance in which men of darker skin had to pass themselves off as someone acceptable to white baseball executives and fans. In the case of Grant, that was as a Native American.... The stunt came to define Grant’s career. From 1901 through the end of his career, he was a major attraction because of it.”