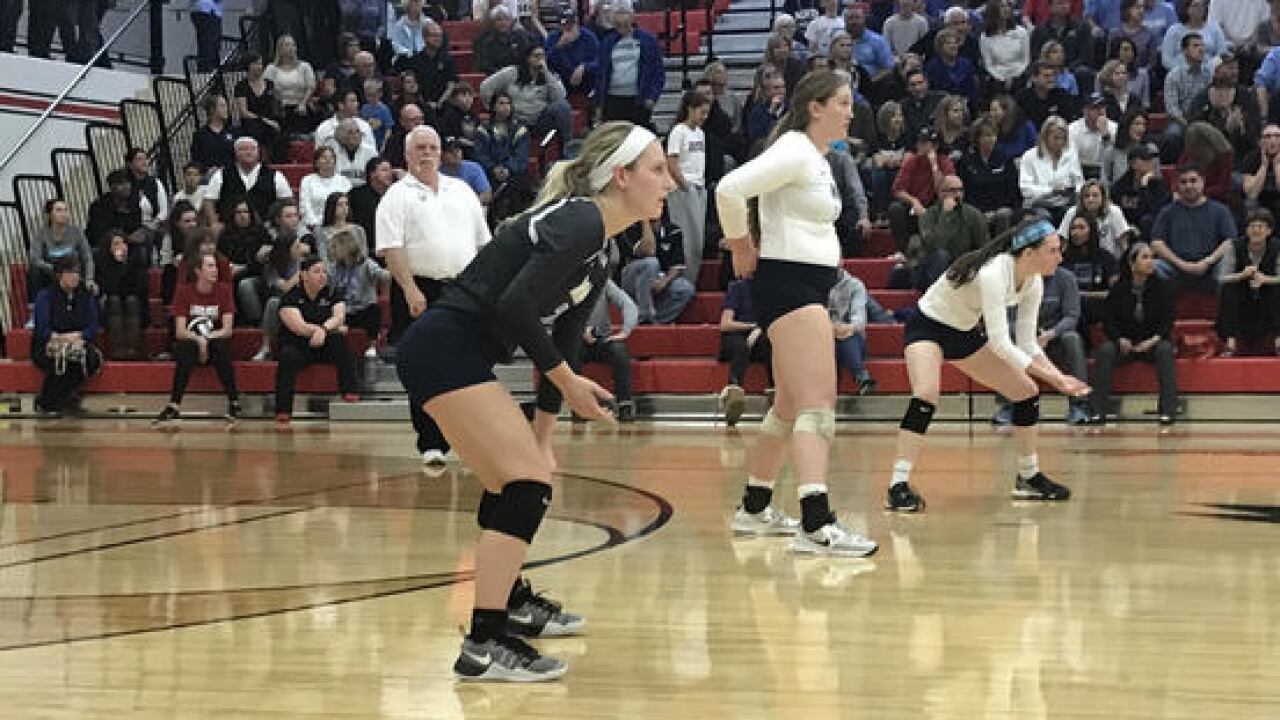 “Nope,” said King, a senior defensive specialist for the Cougars, with the trophy still firmly in her hands.

Not a chance. She had been waiting to get ahold of that trophy for quite some time.

It’s not as though she hadn’t been a regional champion before.

Mount Notre Dame will attempt to win its fourth straight state title next week and will meet Dublin Coffman — the team the Cougars bet in the state final in 2015 — at 4 p.m. Thursday at Wright State in a Division I state semifinal.

But this was different for King.

“I wasn’t on the court once last year,” King said.

“It’s the coolest feeling in the world. I’ve been watching this since my freshman year and since my sister (Danielle) played here. All I’ve wanted was to be on that court and to play in a big game, and I got that tonight.”

Not only did she get to play in the big game, she made a big difference when she seemed to take over defensively after the Cougars dropped the first two sets to Ursuline.

“Last year she didn’t play at all, and obviously we came into the match and she didn’t start the match,” Mount Notre Dame coach Joe Burke said. “When we put her in, she played incredible. We gave her the libero jersey as well to kind of go back to getting her more touches. She played great, the team played great and we’re really happy."

“Everybody else stepped up their defense, and we stepped up our offense as well,” Burke said. “(King) was certainly a big part of it, but everybody kind of started to get in a rhythm and we started to play a lot better.”

King also served the final two points in the match for the Cougars.

“She was dialed in,” Burke said. “It’s fun to watch a player when they’re dialed in like that. She was absolutely dialed in. She passed great, she played incredible defense. She served great and she really did everything.”

King’s facial expressions never changed throughout the match. The occasional subdued fist pump after a big point quickly gave way to icy calm for the next serve. She had a job to do.

“I learned from my past and my mistakes that I can’t get down on myself or get too high on myself. Just don’t be negative. That’s my motto.”

Ursuline cruised to an eight-point win in the first set, 25-17, winning the final five points and 10 of the last 13. The Lions then won Set 2, 25-19, and looked primed for their first regional title since winning state in 2012.

But Mount Notre Dame stayed alive with a 25-20 win in the third set.

“We told these girls that this was going to be a really tough match, regardless of which way it went,” Burke said. “We have so much respect for Ursuline and know they’re a great team. I told them after the first set that we didn’t expect this to go three.

“I’m really proud of how they came out and fought.”

The Cougars were all over Ursuline in the fourth set and surged to a 12-2 lead before cruising to an 11-point win to force the fifth. The final set was more of a back-and-forth game. Ursuline won three straight points to tie the fifth at 13-13, but the Cougars won the final two points and the trip north.

King was a big part of it all.

“You’ve got to go,” King said. “That’s all that was in my mind. You’ve got to put your all in. Those first two games? Who cares? Our season was on the line. We went out and played our hearts out. We played well, and we were composed the whole time.

"That’s what you’ve got to do. You can’t freak out, and you can’t give up on your teammates.”