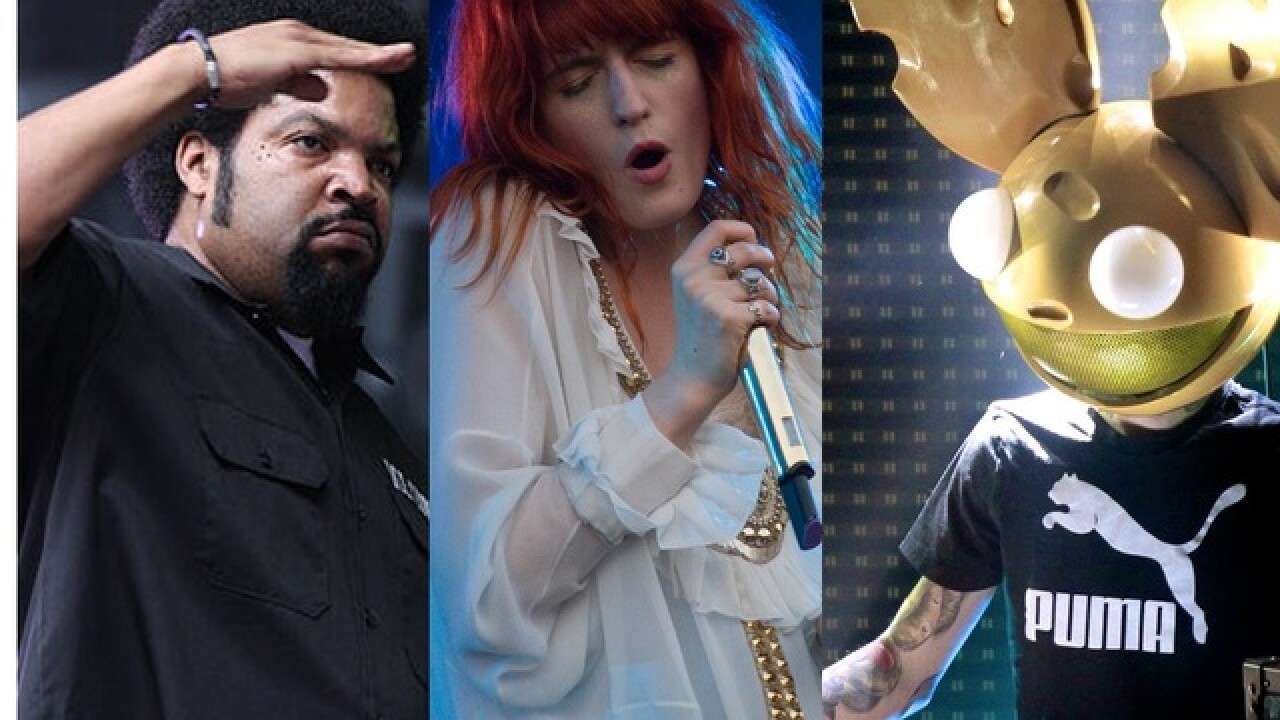 We're here to help, though.

The Bunbury Music Festival has a cornucopia of musical goodies in store, including the 5-year-old fest's first-ever legitimate EDM headliner in the recently added Deadmau5.

There are two kinds of festival aficionados: those who only see the bands they already love and don't care at all about missing out on the rest, and the samplers who live for the chase of moving stage-to-stage and gorging on as much music as possible. Luckily for you, Bunbury's footprint is relatively small and the scheduling leaves way fewer conflicts than the typical fest.

The bottom line is you can't see it all, but with careful planning you can see a lot and, hopefully, not miss out on the best bits.

And so, here are our humble suggestions for the ultimate Bunbury experience. No disrespect to any bands we leave out, but, as we said, you can't have it all.

1:15 p.m. Friday, Sawyer Point Stage: Being the first band on the first day of a three-day festival is one of the toughest draws you can get. So, if for no other reason, you should try to see local pop/punk trio Leggy. Between their recent deal with the same British label that works with fellow hometown faves Wussy and overseas dates with Shonen Knife, they're riding a real high.

2:30 p.m. Friday, Yeatman's Cove Stage: It makes sense that Los Angeles' The Shelters are on the first day's bill. The shaggy California melodic indie rockers' upcoming debut was co-produced by Tom Petty, with whom they're touring this summer.

3:15 p.m. Friday, CVG River Stage: Who doesn't need a little prog rock from a former member of emo band The Receiving End of Sirens? Casey Crescenzo's The Dear Hunter packs an emotional punch via dramatic rock tunes that trace a character's life from the dawn of the 20th century through World War I and beyond.

5 p.m. Friday, CVG River Stage: If you're way-jacked for the Killers later in the night, whet your appetite for super-catchy indie-pop dance rock with Liverpool, England's The Wombats.

5:45 p.m. Friday, Yeatman's Cove Stage: We can't guarantee much, but we can assure you that latecomer soul sensation Charles Bradley and his band the Extraordinaires will give you an excellent taste of what it was like to see R&B legends like James Brown and Otis Redding in their heyday.

6:30 p.m. Friday, Sawyer Point Stage: The closest this year's Bunbury has to a certified chart-killer is Ithaca, New York, electronic pop sensations X Ambassadors. Surely you've heard the single "Renegades" by now, or any one of their other hits in Beats By Dre commercials, "The Blacklist," "Orange is the New Black," "Pitch Perfect 2," "Sons of Anarchy" and Madden NFL 16.

7:30 p.m. Friday, Yeatman's Cove Stage: Los Angeles sister act Haim are officially part of Taylor Swift's squad, and, not for nothing, a killer live act whose show combines breezy California pop with some great indie rock grooves. Plus, you'll be one of the first to hear a few songs from their upcoming second album.

8:30 p.m. Friday, Sawyer Point Stage: It's not Tom Petty and the Heartbreakers, but if you want to hear how Petty got his Southern rock start, mosey over to the Sawyer Point stage for Mudcrutch, which features Heartbreakers Mike Campbell and Benmont Tench and Petty's Gainesville pals guitarist Tom Leadon and drummer Randall Marsh.

9:30 p.m. Friday, Yeatman's Cove Stage: Unlike most festivals, Bunbury doesn't make you choose between headliners, so if you got a dose of Mudcrutch you still have time to stroll to the main stage for Las Vegas glitter rockers The Killers. They will rock you and you will sing along. Repeat after me: "I've got soul, but I'm not a soldier!"

1:30 p.m. Saturday, CVG River Stage: It's a rough spot, opening the day, but you will thank yourself for showing up early to catch Cincinnati's own sitar-and-guitar duo Dawg Yawp.

2:30 p.m. Saturday, CVG River Stage: What the hell, let's make it a hometown three-fer! Automagik have been getting tons of attention lately for their swinging 1960s/'70s Queen-inspired pop racket.

3:45 p.m. Saturday, CVG River Stage: To be honest, I'd never heard of Conner Youngblood, but after discovering his hazy, beat-spiked folk pop, I was instantly won over. This Dallas songwriter is definitely worth a walk-by.

5 p.m. Saturday, Sawyer Point Stage: If you have time, hit the main stage to see some White Stripes-style psychedelic blues from The Worn Flints (4:30 p.m., Yeatman's Cove Stage). But definitely plan on visiting the Sawyer Point Stage for California alt rockers The Neighbourhood. Rock bands don't typically release rapper-heavy mixtapes, but these guys are happy to mix smooth R&B with Weeknd-like dream pop and a touch of rock attitude.

9 p.m. Saturday, Sawyer Point Stage: The first truly tough call of the weekend is punk maniacs Diarrhea Planet (CVG River Stage) vs. Rock and Roll Hall of Fame rap icon Ice Cube. In this case, though, we're going to have to recommend you "Bow Down" to the West Coast microphone legend.

10 p.m. Saturday, Yeatman's Cove Stage: Like its recent dip into hip-hop, Bunbury has pretty much stayed away from Electronic Dance Music (EDM) in the past. But with the late addition of mouse head-wearing international superstar Deadmau5, it's all in. If you don't dance for this one, you're doing it wrong.

2:30 p.m. Sunday, CVG River Stage: Local rockers Mad Anthony are in the midst of an ambitious one-song-a-week project, "Mad Anthology," that is blowing minds. Get on the train before it races out of the station.

4:30 p.m. Sunday, Yeatman's Cove Stage: Lany is one of those bands that feel like it could/should be the next big thing. The Nashville trio plays super-chill R&B that belongs on an '80s synth-pop compilation … in a good way.

5 p.m. Sunday, Sawyer Point Stage: If you need to kick it up a notch (or 20), than Queens, New York, melodic punkers Bayside have the pop-kissed punch you're looking for. And don't be surprised to see a bunch of their hardcore fans crowding the front of the stage and freaking out.

6:15 p.m. Sunday, Yeatman's Cove Stage: One of the must-see sets of the weekend has to be Vancouver's Grimes. The enigmatic synth-pop art punk with the arresting visual style to match her cut-and-paste musical anesthetic is guaranteed to entertain.

8 p.m. Sunday, Yeatman's Cove Stage: Traditional American folk via Iceland? Must be Of Monsters and Men. If you've heard "Little Talks" you know what they're about and you're already planning to see their set.

9 p.m. Sunday, CVG River Stage: We were going to make you choose between the 97X nostalgia time machine that was a reunited British new wave duo Tears for Fears and jokey dress-up funk band Here Come the Mummies (9:15 p.m.), but Tears for Fears dropped out. Decision made.

10 p.m. Sunday, Yeatman's Cove Stage: On a day with plenty of girl power, there is no better topper than fierce vocal powerhouse Florence + the Machine.