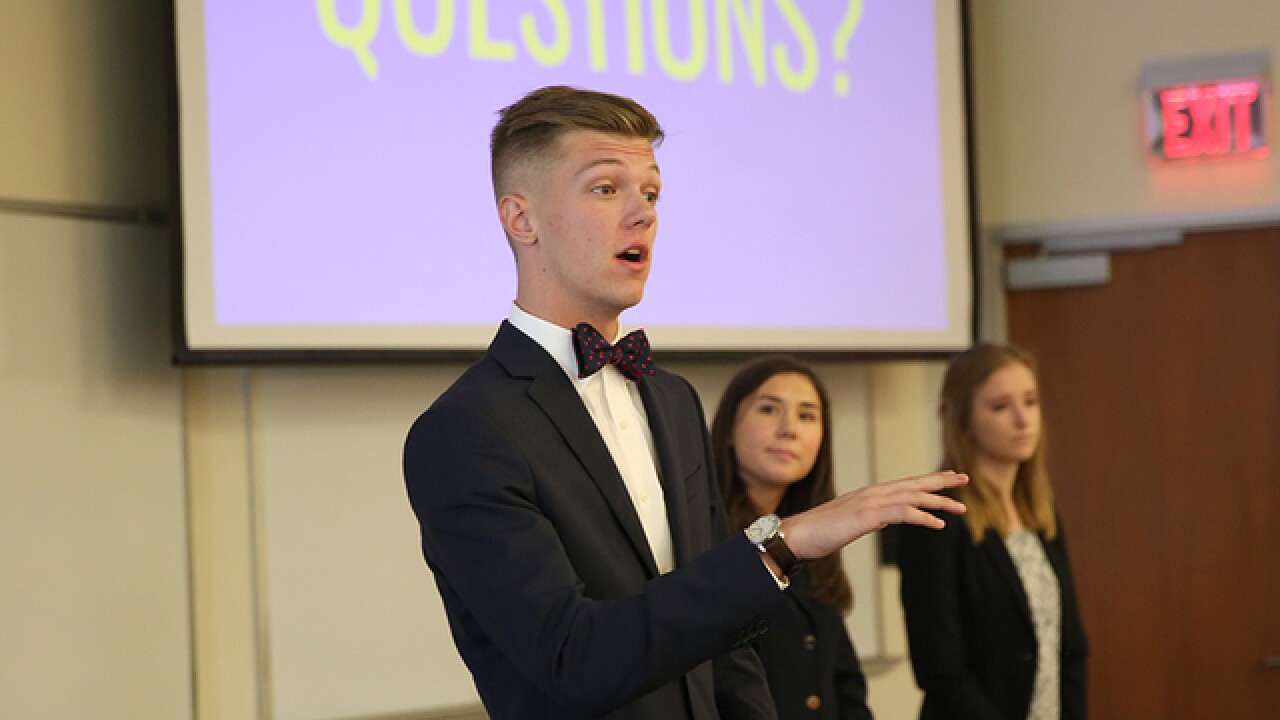 Copyright 2017 Scripps Media, Inc. All rights reserved. This material may not be published, broadcast, rewritten, or redistributed.
<p>Peyton Byrne and his classmate give a presentation on Cincinnati city council woman Amy Murray during a mass Media and Politics class at Xavier University on Thursday, October 26, 2017.  Photo by Leigh Taylor</p>

CINCINNATI -- Each year just before Election Day, I visit a college classroom to hear from the next generation of political strategists.

This year, I asked: Who will be the city’s next mayor? And who will win the nine seats on Cincinnati City Council?

I decided to take these questions to 22 students in Sean Comer’s Mass Media and Politics class at Xavier University because their insight isn’t just youthful wisdom. Each of these students worked as an intern this fall for one of six City Council candidates.

In past years, college students have been proven to be pretty accurate prognosticators of Election Day outcomes.

In 2015, a University of Cincinnati elections class was merciless in their criticism of “Buddie,” a superhero-esque mascot with a green pot bud head who visited college campuses to promote the legalization of marijuana in Ohio through Issue 3. Days later, Issue 3 lost with Ohio voters by 28 points.

In 2016, I visited UC again to ask a roomful of mostly freshmen about the presidential election. This sad, frustrated group didn’t like Donald Trump or Hillary Clinton. They worried more about paying off student debt than who would win that election.

The class overwhelmingly supported Clinton. But when I asked if any of them actually liked her, only one gray-haired woman raised her hand.

“This is the kind of result that makes the Clinton campaign weep,” their professor David Niven said in what now seems like prophesy.

So needless to say, I had some pretty high expectations from Comer’s students when I visited last week to hear about their experiences interning for city council candidates.

Comer assigned his students in groups of three and four to work for one of six candidates – Councilwoman Amy Murray or Councilman Christopher Smitherman, who are seeking re-election, or newcomers Greg Landsman, Ozie Davis, Henry Frondorf or Tamaya Dennard.

The candidates are vastly different, from their political affiliation to their access to campaign dollars. Comer just wanted to ensure each student had a memorable experience with a good campaign.

“Engaging in local politics can overcome partisan divides," Comer said. "They (students) may have disagreed with a candidate’s policy, but they could work with them because they developed a personal relationship. And they recognized that generally the issues of the city are nonpartisan.”

After months of working on these campaigns – from speaking to voters on doorsteps to honk and waves on street corners – the students seemed to genuinely like their candidates. So much so that each student predicted their own candidate would win a seat on council, even underdogs such as Davis and Frondorf.

Their enthusiasm was, frankly, a relief. The last two years of classes I visited had very little to like, and nothing nice to say, about who or what was on the ballot.

The student excitement was the good news.

The students found that city voters crave authenticity. They want the candidate on their porch stoops to ask for their votes.

“If they don’t see your face, they’re not going to vote for you,” White said. “This is something I heard when I was out canvassing, people would say, ‘Well then where is he, where is your candidate? I want to hear him talk.’”

Sam Peters, who worked for Frondorf, encountered the same thing on the campaign trail.

“A lot people just aren’t motivated, especially in an election this small,” she said. “You do need to connect with people on a personal level, you can’t just send them a mailer.”

When Miles Tieghmeyer was on the campaign trail for Davis, people told him they would vote. But he isn’t sure they actually will.

When he asked what kind of city issues voters cared about, “no one could really think of any, or either they didn’t want to tell me,” he said. “But no there’s not one issue. There’s no 2013 streetcar that everyone is focused on.”

“Everyone is just kind of, ‘I’ll vote for who I like,’” Tieghmeyer said.

Which is why this election may be very neighborhood specific.

“We’re far enough removed from any big controversies on city council that no one is thinking, ‘we need to fix this,’ Tieghmeyer said.

That’s why the class predicted all six City Council incumbents win re-election, with David Mann and P.G. Sittenfeld as the top vote getters.

The class also predicted Landsman and Dennard win two of the three open council seats. But they were divided on who wins the third council seat between Frondorf, Davis, Michelle Dillingham or Laure Quinlivan.

All of the students believe the mayoral race between Mayor John Cranley and Councilwoman Yvette Simpson will be very close.

“Who will win the mayor’s race?” I asked the 19 students who attended class on Oct. 24.

“Who do we think will win, or who do we want to win?” one student asked.

With the question clarified, I tallied up the votes: 11 students for a Cranley win; 8 for a Simpson win.

When I got back to the office, I was so proud of my reporting technique that I shared the tally with a colleague. I told her about how the students wanted to clarify my question.

“So who did they want to win the mayor’s race,” she asked.

“I don’t know, I didn’t ask them,” I said, suddenly aware that I had perhaps made a mistake.

I had flashbacks to a year ago, and the class who promised 21 votes for Hillary Clinton, while simultaneously admitting that none of them liked her.

Now, I wish I could go back to that same class to ask who actually showed up at the polls on Election Day 2016.

Because then, maybe, I really would know who will win the mayor’s race tomorrow.

Paula Christian writes about politics and government. To read more stories by her, go to www.wcpo.com/christian . To reach her, paula.christian@wcpo.com . Or follow her on Twitter, @paulachristian_