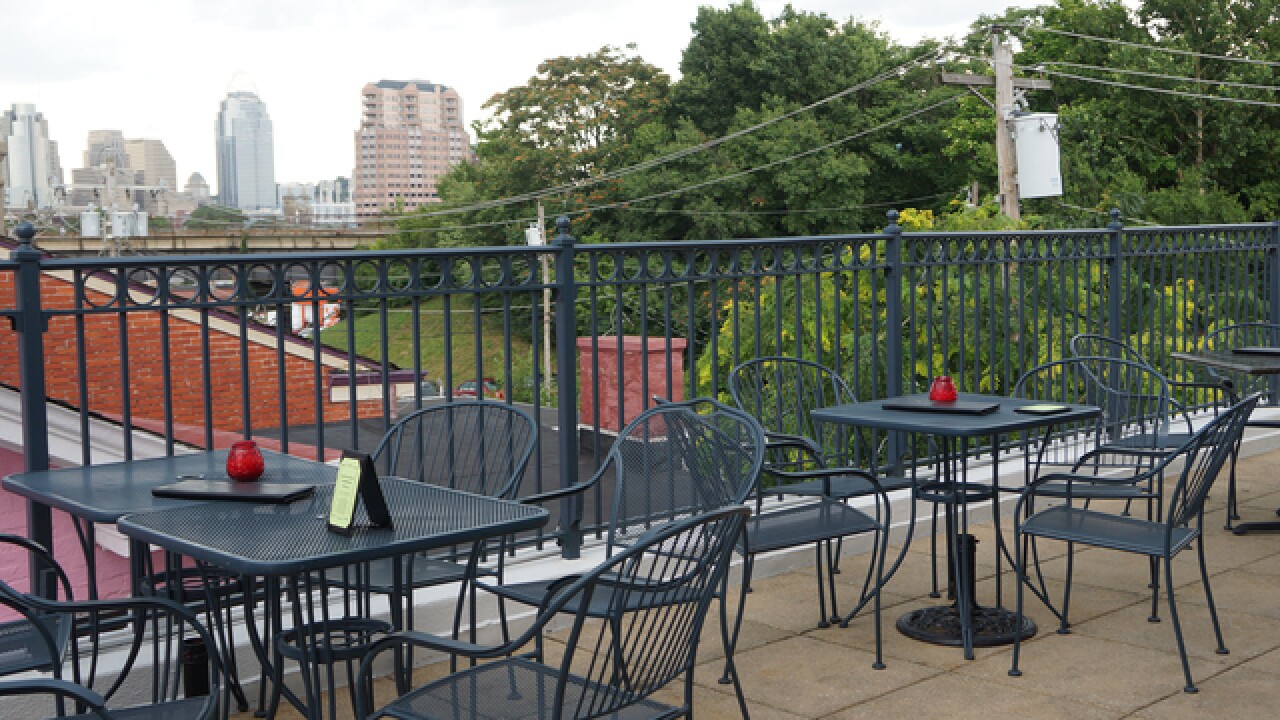 Copyright 2017 Scripps Media, Inc. All rights reserved. This material may not be published, broadcast, rewritten, or redistributed.
Garin Pirnia | WCPO contributor
<p>Lisse's terrace has a spectacular view of Downtown.</p>

It might be hot outside, but don't let the humid temperatures deter you from drinking a few beers or cold brew coffee al fresco.

Since last summer, a bevy of new breweries, bars and restaurants have opened around town. Brave the heat and grab a cool cocktail at these nine new-ish establishments with exceptional patios and beer gardens.

Since opening in November, Mecca has been steadily adding to its outdoor oasis, which now includes a covered bar that serves boozy slushies. The roomy enclave shows off a Love Over Hate mural; strewn ferns hanging above; barstools carved out of metal trash cans; and picnic tables that dot the graveled terrain. It feels like you're in the Southwest, not Over-the-Rhine.

Co-owner Joe Creighton introduced the Chunker (a mini bottle of liquor poured into a can of San Pellegrino) as a way to keep the drink menu simple. During happy hour, all beers are a dollar off, and Mecca offers a $5 beer can and shot deal. So crack open a cold one and chill.

Chez Nora closed in 2014, and it took until last summer for Dutch steakhouse Lisse to take over the space. Lisse finally opened the rooftop terrace for service this spring. Diners can spy downtown's skyline and watch trains traverse the tracks.

Summit Park in Blue Ash completed Phase I of its development when restaurants Brown Dog Cafe, Senate and Tahona Bar + Kitchen moved in earlier this year. Tahona and Senate's patios overlook the 130-acre park, garnished with petunias, the multi-colored Glass Canopy, a huge grassy space, a playground and a looming observation tower.

Inside or on the patio, sample Tahona's tacos, salsa bar, margaritas and a mezcal cocktail called the Oaxacan Buck (lime juice, ginger syrup, Jarritos club soda and Illegal Mezcal Joven). After a dram of tequila, explore the park.

What could be better than spending the summer watching classic '80s movies from your childhood while sipping on Tarantino-themed cocktails? Probably nothing. All summer long, the Bon Appetit-approved video store/bar in Walnut Hills will screen movies -- on DVDs, not VHS tapes -- on its patio every Saturday night, weather permitting.

So far the bar has featured "Caddyshack," "The Goonies," "Back to the Future" (with real DeLoreans on hand) and "Raiders of the Lost Ark," and each event brings different drink specials. The bar shares the courtyard with Just Q'in, so throw some beef brisket into the mix, too.

The courtyard of Coppin's Restaurant & Bar is perfect for drinking slushies , playing a round of cornhole and munching on Southern vittles like blistered pimento cheese. Half of the area contains faux grass, a partially covered lounge area and an outdoor bar (that's where you can order sangria slushies); the other half is delineated for more formal dining. Spend a day in the sun increasing the Vitamin D -- and your warm-weather drinking prowess.

Even though it opened in the seasonably warm late fall, Second Place patrons (and their dogs) didn't get to capitalize on patio weather until recently. The sprawling Northside space connects to sister restaurant The Littlefield's deck, making it easy to shuttle between both places.

Over-the-Rhine's Queen City Radio opened in September, situated away from the bustling Washington Park and Vine Street's restaurants and bars. With an assist from a blazing fire pit, some days this winter were warm enough to sit at one of the picnic tables in its beer garden. When the garage doors are up, the garden feels even more spacious.

On July 1 the beer program will start flowing, centering on a lot of hard-to-get regional brews. Transport the coffee and beer to the remote and peaceful beer garden -- surrounded by marigolds and some shade -- to cool off on a hot day.

In February, MadTree finally launched its new facility, MadTree 2.0, in Oakley. The previous location didn't have an outdoor area, but 50,000-square-foot MadTree 2.0 more than makes up for it with a 10,000-square-foot beer garden that features a bar, barstools, tables and cornhole. The space is huge, but on a weekend night people still pack it in.

Also in February, College Hill's Brink Brewing opened but on a much smaller scale. The microbrewery's garage doors lead to an intimate patio where customers can drink seasonable beers like Down Time Summer Ale and Debbie Jean Blonde.