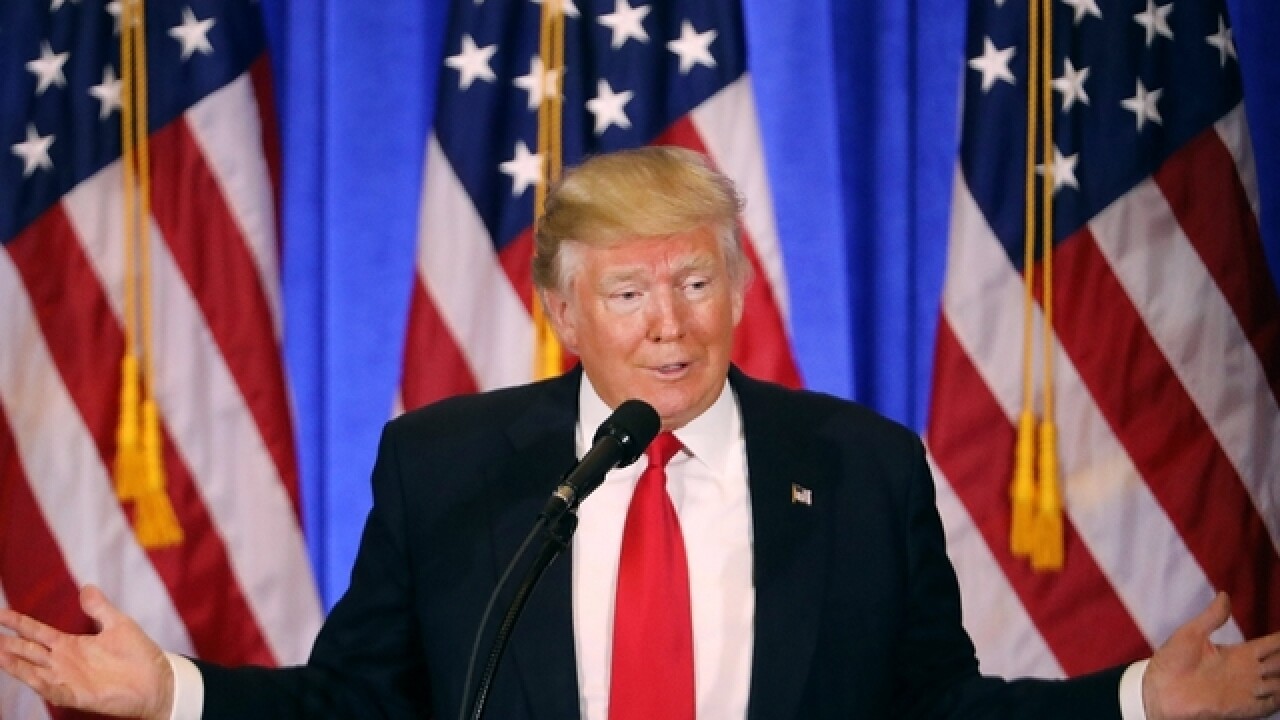 There could be some big changes coming to the Tri-State as Donald Trump prepares to be sworn in as the 45th President of the United States on Friday.

If Trump delivers on his campaign promises, Cincinnatians could see more jobs, a repeal of the Affordable Care Act, fewer business regulations and perhaps a new Brent Spence Bridge. Here are 9 changes to watch for:

Meanwhile Trump is putting the finishing touches on a healthcare replacement plan to provide "insurance for all," he told the Washington Post in a Jan. 14 interview.

Also, he will demand that drug companies negotiate directly with Medicare and Medicaid and lower their prices, saying they will no longer be "politically protected."

The House on Jan. 13 followed the Senate in approving a budget resolution that would repeal major portions of Obamacare. Now committees in both chambers will work out the details.

One of Trump’s biggest campaign promises was to revitalize U.S roads, bridges, tunnels and airports.

He vowed to replace the aging Brent Spence Bridge, which is functionally obsolete, when he spoke at a campaign rally in Wilmington just days before the election.

The big question about Trump’s $1 trillion plan to upgrade the nation’s infrastructure and employ millions of workers: How to pay for it?

Using tolls to pay for improvements to the Brent Spence corridor -- which would include the bridge itself as well as down Interstate 71/75 to Dixie Highway in Fort Mitchell and up I-75 North to the Western Hills Viaduct in Cincinnati's West Side -- has been one of Northern Kentucky's hottest political potatoes in recent memory, a discussion that Louisville's newly opened bridges have re-ignited here.

"It's a structurally sound but functionally obsolete bridge," said Bob Yeager, chief district engineer for the Kentucky Transportation Cabinet."Something has to be done."

Don’t book a vacation to Cuba just yet.

Trump could easily undo some of the executive orders Obama worked on with foreign countries. Obama made several foreign policy changes – lifting embargoes and restrictions on Cuba, an international climate agreement, and a nuclear deal with Iran – that Trump has criticized. It wouldn’t take much for Trump to void those deals once he’s in charge, said Lee Hannah, a political science professor at Wright State University.

“He can change our foreign policy very quickly,” Hannah said. “Most of that is held together with executive orders.”

Given Trump’s rhetoric, Hannah predicts that China will give the new president a chilly reception. And, reversing decades of history, Russia could soon become a friendly ally.

How those two partnerships shake out under President Trump could change everything from the Syrian war to international trade deals, Hannah said.

“Those are the two most pressing,” Hannah said of the U.S. relation with China and Russia. “He could have a very quick effect in how he directs our relationship with those two countries – really, flipping them.”

The next four years could be a boon for Cincinnati’s economy – unless Trump starts a trade war.

With Republican majorities in the House and Senate, Trump is in a position to cut corporate taxes, reduce regulations, replace Obamacare and fund an infrastructure program that could create jobs, said Miami University Professor Rich Hart.

Related: Local companies could learn to like President Trump. Unless he starts a trade war

Hart is a professor emeritus in economics who is one of House Speaker Paul Ryan’s intellectual mentors. Some of those things could help Trump follow through on his promise to bring jobs back to the U.S. and, in turn, help middle-class families.

“He’s going to end this war on fossil fuel,” Hart said. “Energy is one of the largest costs in the production of manufactured goods, second only to labor. If we can bring the cost of production down, I think it could help bring some of this manufacturing back home.”

The National Labor Relations Board could re-visit many recent pro-employee efforts, and a Trump administration may repeals or revise executive orders that added restrictions to government contractors, predicts Brian Dershaw, a partner at Taft Stettinius & Hollister in Cincinnati who specializes in labor and employment.

Some unintended consequences: If the government becomes less aggressive in its enforcement of labor laws, it could prompt more individual lawsuits and give fuel to the labor movement.

“The potential growth in jobs coupled with decreased employee-friendly regulations could prompt a spike in the labor movement as employees seek to take control of their wages, terms and conditions of employment,” Dershaw said.

With job creation as Trump’s top priority, experts predict a rollback or lack of enforcement of environmental laws that are costly to business.

“The big thing we can expect is to move away from is President Obama’s real focus over the past six to eight years on climate change,” said Chase Dressman, who specializes in environmental law at Taft.

Dressman predicts change on two key regulations: the Waters of the United States rule, which defines which rivers, streams, lakes and marshes fall under the jurisdiction of the Environmental Protection Agency and Clean Water Act rules; and the Clean Power Plan, which reduces carbon pollution at power plants in order to combat climate change.

“Companies that have been subjected to higher levels of regulation recently … hope a Trump presidency will be a more favorable and business-friendly environment for their business,” Dressman said.

These include companies involved in coal, power plants and fossil fuels.

He will take to Twitter to criticize just about anyone, from actress Meryl Streep to Boeing.

Even members of Trump's own party won’t be immune from insulting tweets.

Earlier this month, Trump used one tweet and 132 characters to chide Congress after House Republicans passed a plan to gut an independent ethics office that investigates complaints against Congress.

Within hours, Republicans dropped the plan.

With all that Congress has to work on, do they really have to make the weakening of the Independent Ethics Watchdog, as unfair as it

“You’re going to see a president that’s not afraid to take on his own party,” Alex Triantafilou, the Hamilton County Republican Party Chairman said. “People don’t see him as part of the internal party structure.”

President Obama was able to nudge the Supreme Court to the left with two appointments: Justices Elena Kagan and Sonia Sotomayor.

Conservatives who voted for Trump want to see a shift in the court when he takes over.

He’ll be able to start on that work right away given that that Justice Antonin Scalia’s seat remains open, following his death last February. Republicans refused to give Obama’s pick, Merrick Garland, a confirmation hearing.

With Republicans controlling Congress, a Trump-backed pick for the Supreme Court is likely to move quickly.

Conservatives hope Trump might have a few more chances, too, to name a few more appointments, given the ages of the court’s most veteran justices.

“That’s the thing that excites Republicans the most: this idea that we will have people who will honor the constitution and not be activists,” Triantafilou said.

During a visit to Cincinnati last month, Trump promised thousands of supporters he would develop a paid maternity policy and offer tax credits to families paying for child care.

“We’re going to make sure no one is penalized for the decision to have a family,” Trump told the Cincinnati crowd in December.

One of his closest and most trusted advisers, daughter Ivanka Trump, routinely stumped on the issue during the campaign and helped him write the policy proposal.

“He will focus on making child care affordable and accessible for all,” Ivanka Trump said at the convention in July.