Here are 9* liquid brunches to know and love (though it's good to add some food, too) 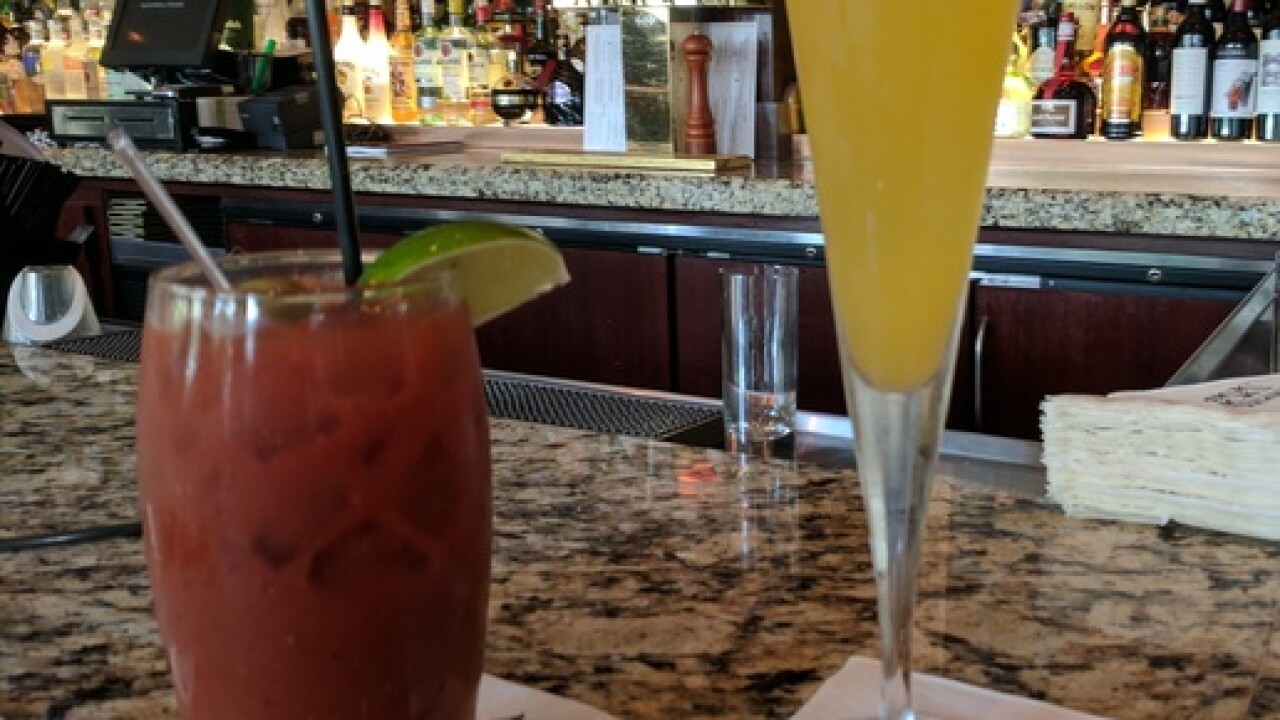 Copyright 2017 Scripps Media, Inc. All rights reserved. This material may not be published, broadcast, rewritten, or redistributed.
Garin Pirnia | WCPO contributor
<p>McCormick & Schmick's does not skimp with $3 bloodys and mimosas.</p> 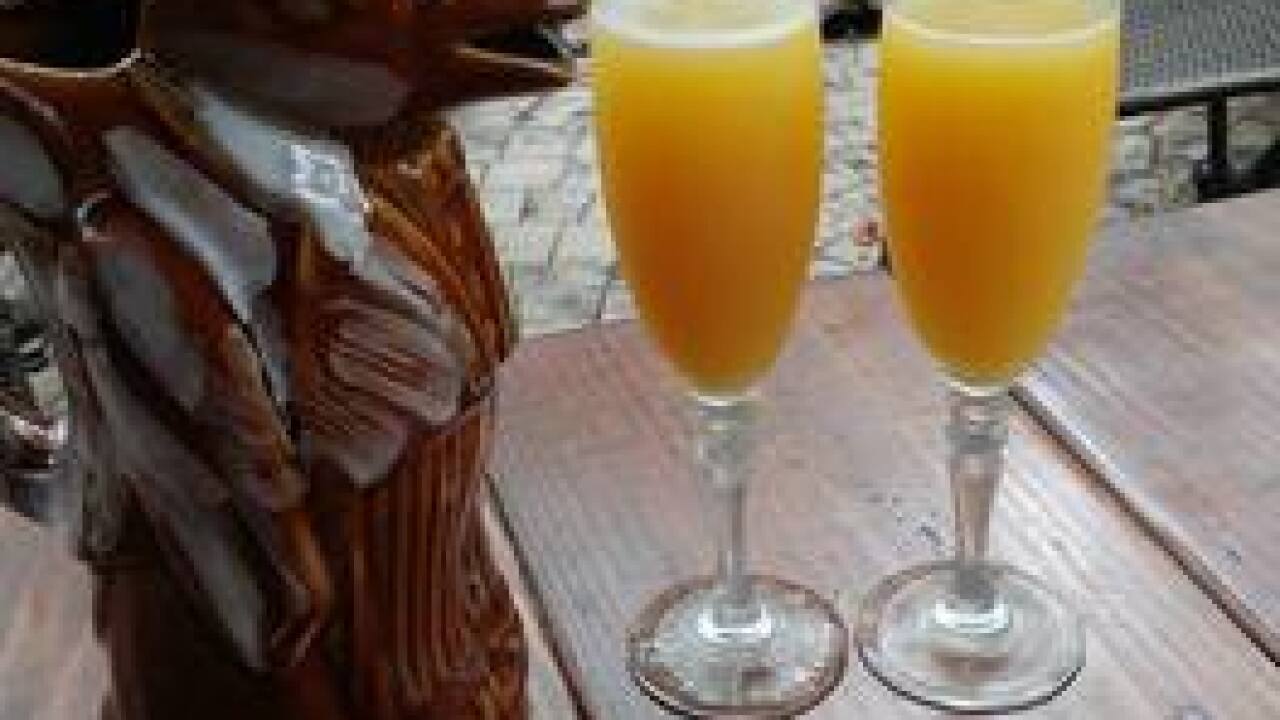 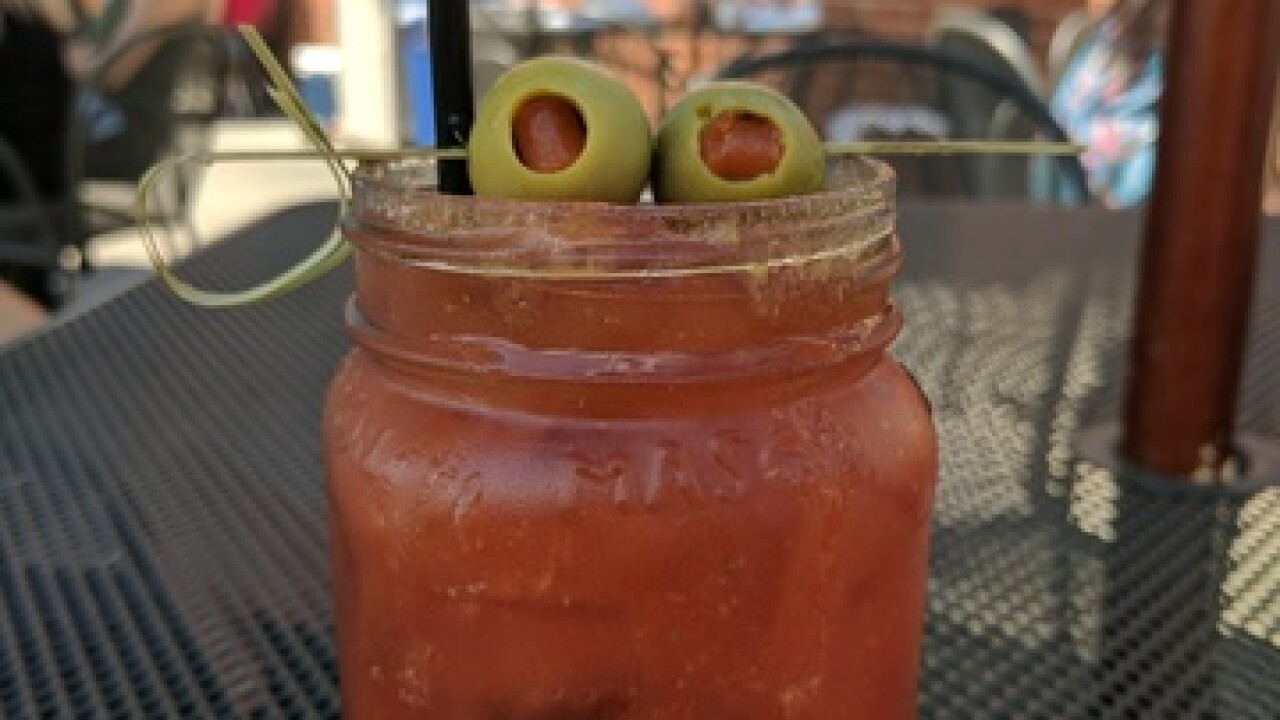 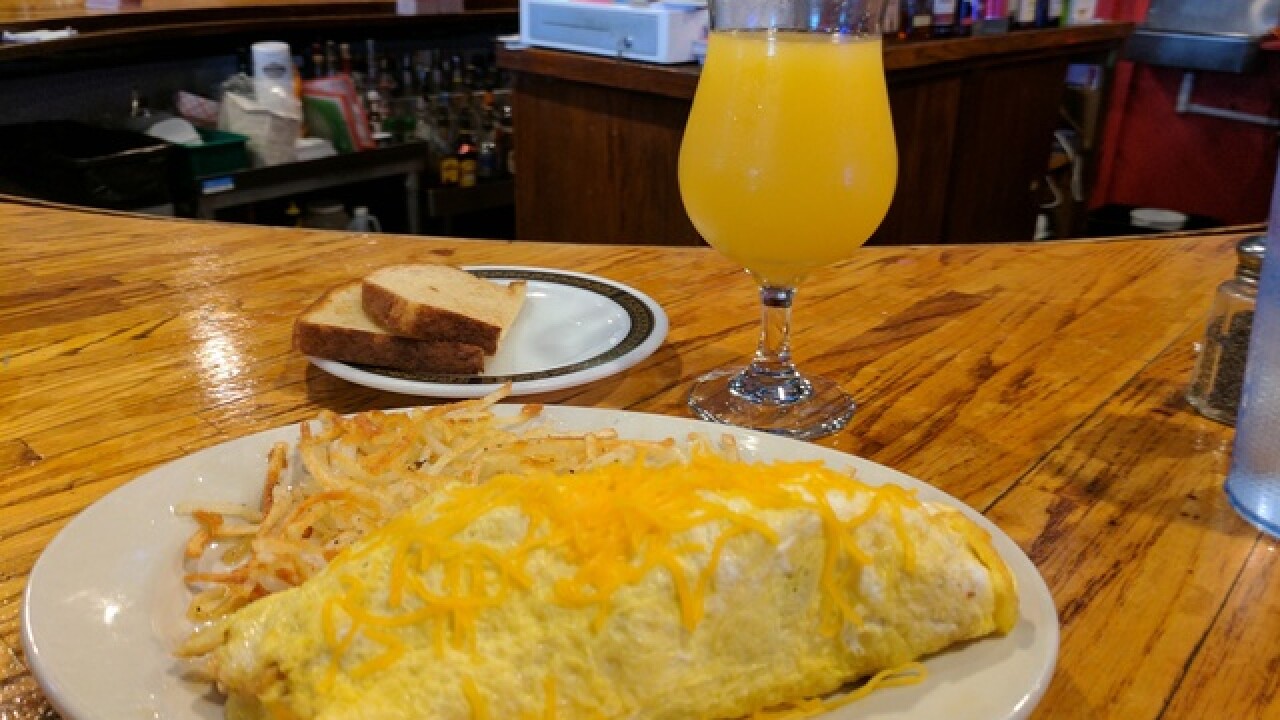 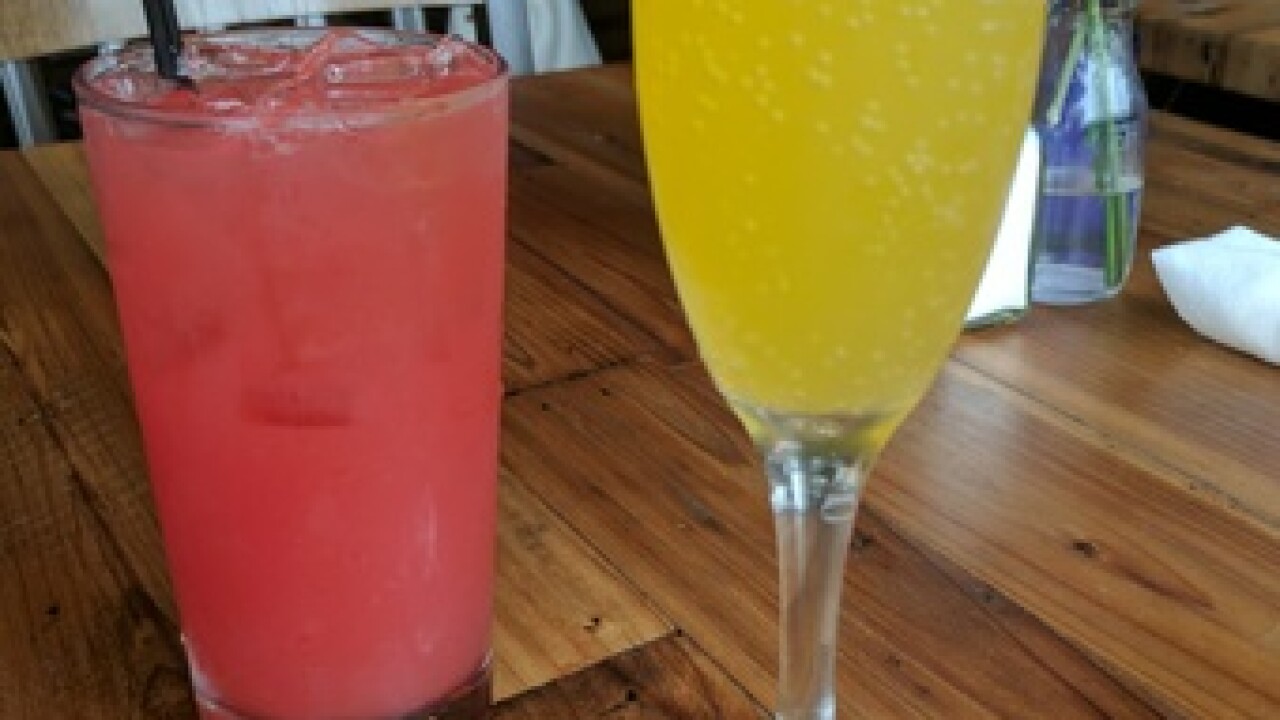 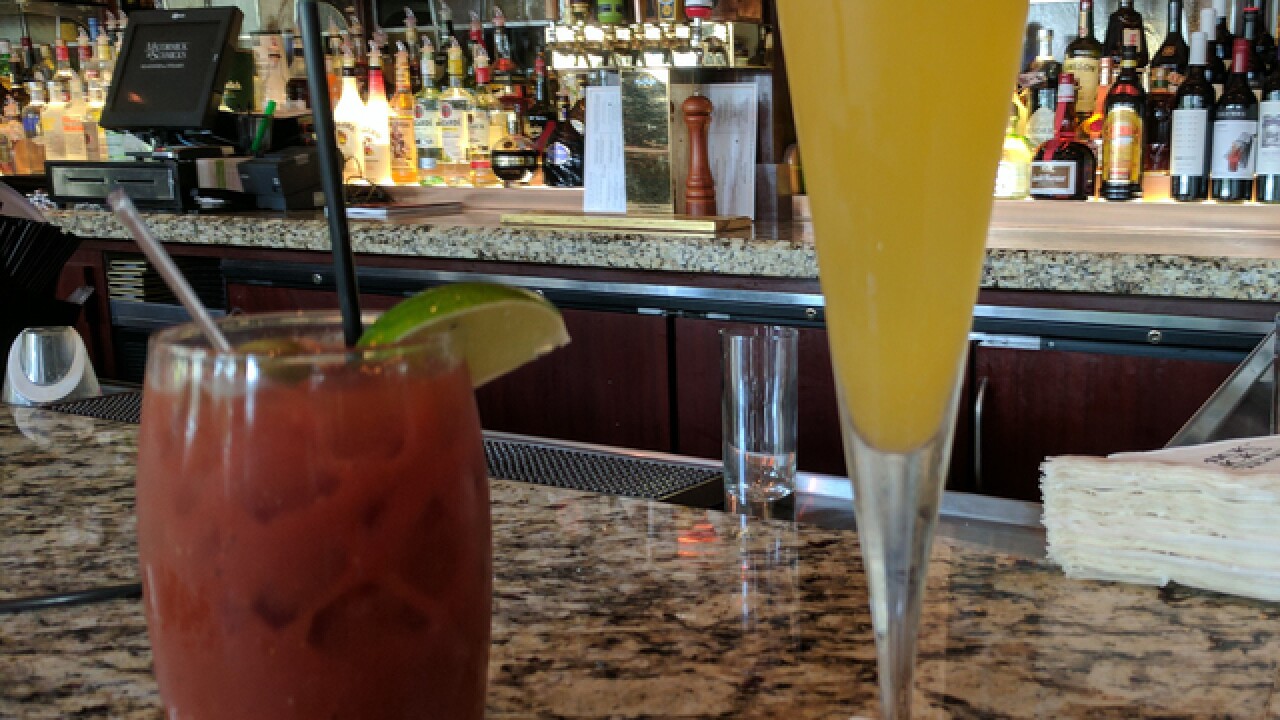 CINCINNATI -- Liquid brunch arrives on the weekend, a time to invest in bottomless and by-the-pitcher cocktails.

A few restaurants in town offer bottomless mimosas -- Nation, Chapter Mt. Adams, Ladder 19, Revolution Rotisserie and Kitty's Sports Grill among them -- but several others serve mimosas by the pitcher and dirt-cheap libations by the glass.

From bottomless blueberry mimosas to spiked lemonade, here are nine places that take liquid brunch to the next level. Remember: Even if ordering food with the deal isn't required, it's in your best interest to eat something, too.

This popular Sunday brunch destination boasts one of the best views of the city, and it has a variety of boozy drinks to go along with the experience. Try a glass or pitcher of Incline's tart spiked lemonade. First, choose the fruit puree (raspberry, strawberry or blueberry). Then the restaurant pours Stoli vodka, lemon juice, simple syrup and Sprite over the puree.

Also consider a glass or pitcher of sangria or fruity mimosas. Get a little adventurous with Incline's $12 Ultimate Mary (spicy mix, vodka, bacon, shrimp) or the Moscamango, which consists of sparkling Moscato infused with mango pulp ($9 per glass, $36 per bottle). It's slightly sweet and effervescent -- like life itself. 2601 W. Eighth St., Price Hill. Brunch: 10 a.m.-2 p.m. Sunday.

Ensconced near Paul Brown Stadium, Kitty's doesn't receive much traffic on non-game days (especially Reds games), but it still should be on your weekend brunch radar. When it opens for brunch -- at either 11 a.m. or noon, depending on what's happening Downtown  -- Kitty's offers $12 bottomless mimosas and bloody marys for three hours on Saturdays and Sundays. The one rule is you must purchase a food item, whether it's a basket of wings, a $4.99 grilled cheese, an omelet or an appetizer. (Kitty's established the rule so people would stop overindulging on booze on an empty stomach, thus needing to be carried out.) The offer is valid only on non-game days; on game days mimosas are available for $4.50 per glass. 218 W. Third St., Downtown. Brunch: 11 a.m.-2 p.m. or noon-3 p.m. Saturday and Sunday.

Keystone does not supply a bottomless deal, but it does have $14 pitchers on weekends that you can split with a group of people (or drink by yourself). Five different mimosa flavors can be poured into the pitcher: peach, mango, guava, strawberry or orange juice. Besides mimosas, Keystone has a nice selection of bloody marys -- ranging from Angry (spicy) to Irish (a pinch of stout beer) -- and cocktails, such as the John Daly (Firefly sweet tea, vodka and lemonade) and Bourbon Breakfast (bourbon, orange juice, Ale-8, simple syrup and lemon). 313 Greenup St., Covington; 3384 Erie Ave., Hyde Park; 249 Calhoun St., Clifton. Brunch: 10 a.m.-2 p.m. Saturday and Sunday.

Nation's bottomless weekend brunch is so popular there is sometimes a line out the door. For $28, brunchers get one entree (included in the price) and unlimited Bloody Carries (Nation's version of a bloody mary, named after its namesake, the hatchet-wielding Carrie Nation), screwdrivers (vodka and orange juice) or mimosas. Pick the breakfast tots (tater tots smothered in cheese, sausage gravy and a fried egg), 6 for 6 (two fried eggs, two slices of bacon and two pieces of toast) or the Hangover burger (goetta, ham, cheese and a fried egg on an English muffin). 1200 Broadway St., Pendleton. Brunch: 10 a.m.-2 p.m. Saturday and Sunday.

Enjoy unlimited mimosas at this Over-the-Rhine haunt. The deal costs $20, with no food item included (but also no need to purchase food to get the deal). However, you should probably eat something, so we suggest the rotisserie chicken and waffles. The mimosas are available 10 a.m.-3 p.m. Sunday, but you're allowed to stay as long as you want to drink as many mimosas as you want. But if drinking sparkling wine with orange juice isn't your thing, Revolution also has craft cocktails. The Super Cereal synthesizes with Cinnamon Toast Crunch soaked in almond milk, Ancho Reyes (chile liqueur) and bourbon, and it's finished with a toasted marshmallow. Mimosas are available by the glass ($7), as is a bloody mixed with chimichurri and tequila ($9). 1106 Race St., Over-the-Rhine. Brunch: 10 a.m.-3 p.m. Sunday.

On weekends Che offers an Argentine brunch, replete with empanadas, steak and eggs, Spanish coffee (Tia Maria coffee liqueur and Bacardi topped with whipped cream) and $4 mimosas ($20 for pitchers). The mimosas come in a penguin wine pitcher, a.k.a a pinguino. You know you want mimosas poured from a penguin, so get on it. 1342 Walnut St., Over-the-Rhine. Brunch: 11 a.m.-3 p.m. Saturday and Sunday.

Unlimited $3 mimosas and bloodys? And they don't skimp on the quantity? Yup. During weekend brunch get a mimosa served in a fancy champagne flute, or try a Fuzzy Sparkler: peach schnapps, orange juice and sparkling wine. Brunch isn't just $3 mimosas, though. Order one of the restaurant's five other kinds of bloodys ($9-$11), including one mixed with pineapple juice; blueberry mimosas, sangria and bellinis are other boozy options. Although the brunch menu has a lot of seafood on it -- such as a crab cake Benedict -- M&S also offers cinnamon rolls, chicken and waffles, and biscuits and gravy. 21 E. Fifth St., Downtown. Brunch: 11 a.m.-3 p.m. Saturday and Sunday.

Of all the places in town that do mimosas, Chapter (formerly Next Chapter) wins in offering the most flavors -- nine. For $18, order an array of bottomless pitchers, ranging from flavors like basic orange juice to blood orange, watermelon, huckleberry and pomegranate. Or simply get a mimosa or bloody by the glass. Pair the liquids with French toast, wings, a goetta grilled cheese or an "Only on Sunday" (hand-breaded chicken and pickles on a brioche bun). 940 Pavilion St., Mount Adams. Brunch: 11 a.m.-3 p.m. Saturday and Sunday.

E+O Kitchen and Via Vite

E+O Kitchen takes a different approach to boozy brunch. Instead of offering pitchers of drinks, for $26 it has a "build-your-own bellini." Customers receive a bottle of Kila Cava and a carafe of fresh orange juice, peach or guava puree. By-the-glass mimosas and a drink called Batida de avocado (cachaca rum, lime, vanilla coriander syrup and avocado) are also on the menu. 3520 Edwards Road, Hyde Park. Brunch: 11 a.m.-3 p.m. Saturday and Sunday.

Via Vite also eludes bottomless liquids with make-your-own mimosas. It entails a bottle of Prosecco and a carafe of orange juice for $36. If that's too fancy, sample a single mimosa ($6), bloody mary ($8) or the signature drink, a Sgroppino: grapefruit vodka, Madisono's ruby red sorbet and Prosecco. 520 Vine St., Downtown. Brunch: 10 a.m.-3 p.m. Saturday and Sunday.