Comedian performing at Aronoff in February 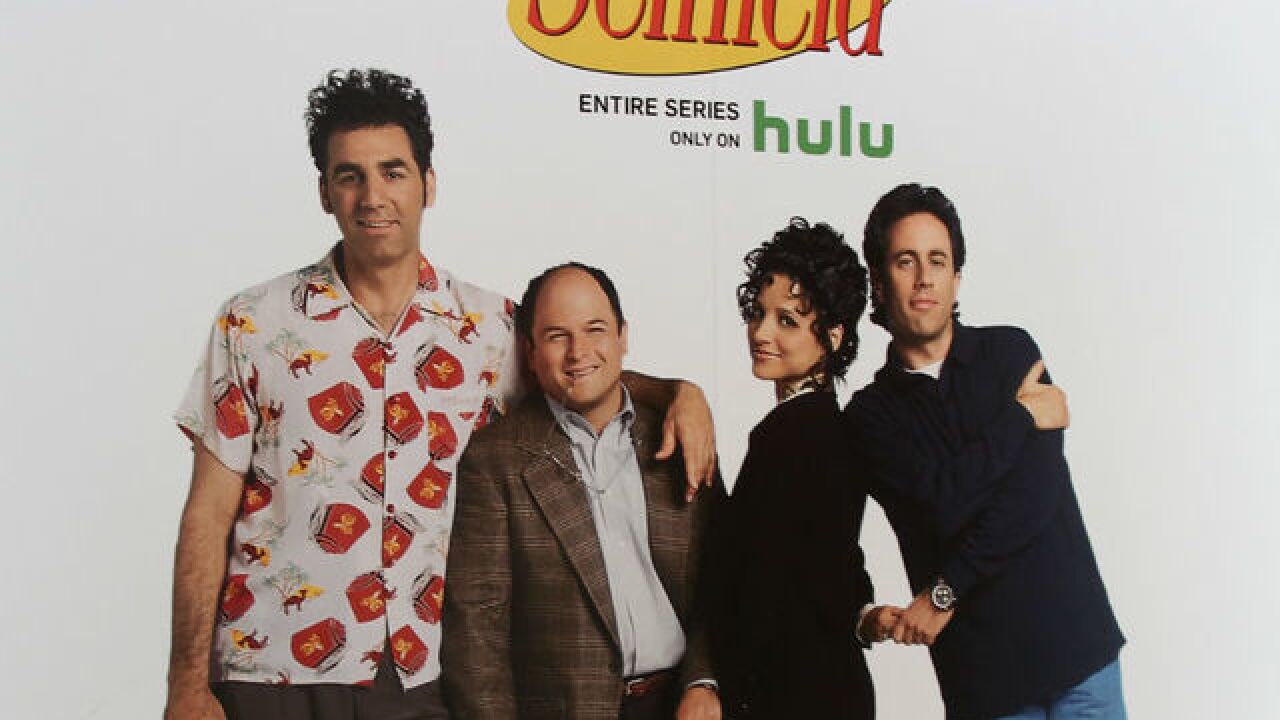 CINCINNATI -- Want to feel old? Well, this should do it -- 2018 marks 20 years since “Seinfeld” concluded with a two-part episode that finished with Jerry, Elaine, George and Kramer in jail essentially for being heartless jerks. But man, they were funny heartless jerks.

Jerry Seinfeld coincidentally will be in Cincinnati on Feb. 3 for a stand-up performance at the Aronoff Center, so what better time to link his iconic show to the Queen City? It might not seem like "Seinfeld" yielded a lot of connections to Cincinnati, but they exist -- though some are not as obvious as others.

A mere mention of our great city is worthy enough to make the list, even if it was in anger.

"The Serenity Now" episode hilariously showed what happens when people bottle up emotions and when they release them. Kramer found this out after vandals destroyed his Anytown, USA setup in the apartment hallway. When he snapped, he destroyed several computers George was hiding in his apartment as part of a scam to become his father’s best computer salesman.

Meanwhile, Jerry’s then-girlfriend told him he didn’t get mad enough. So when he got a call saying a flight had been changed, he let the person on the other end have it:

Jerry: Hello? Yeah, this is Jerry Seinfeld. No, no, no, I do not want to stop over in Cincinnati. Well, then you upgrade me. That's right, you should thank me. Goodbye. (Hangs up) Hey, I'm flyin' first class.

Elaine: Where did that come from?

Jerry: Patty showed me how to get mad. You gotta problem with that?

Not a huge mention, but we’ll take it.

Sports provided a number of "Seinfeld" connections throughout its nine seasons. A big connection was Paul O’Neill, a member of the 1990 Cincinnati Reds World Series-winning team who was later traded to the New York Yankees.

After a misunderstanding caused Kramer to sell off an important baseball card signed by the whole Yankees organization that was intended for owner George Steinbrenner, Yankees employee George demanded Kramer get it back. It had been gifted to a sick boy in the hospital whose favorite player was O’Neill. Kramer cut a deal with the kid that if O’Neill hit two home runs, he could have the now framed card. O’Neill was none too pleased with the tall task:

O’Neill appeared to have gotten the second home run, but it was ruled an error, resulting in Kramer and the boy debating whether the deal was complete.

A trade for Junior

The Yankees offered more than one reference with a Cincinnati tie; in fact, one episode had two in the same statement.

In "The Caddy" episode, George locked his keys in his car and it was stranded at Yankee Stadium. He realized it looked to his bosses that he was the first to arrive and the last to leave every day. He decided to take advantage and make a trip to his fiancee’s family’s cabin during work hours.

During their stay, he told her his plan to bring two big stars to the Yankees.

George: I think I got it. How 'bout this? How 'bout this? We trade Jim Leyritz and Bernie Williams for Barry Bonds, huh? Whadda ya think? That way you have Griffey and Bonds, in the same outfield! Now you got a team! Ha ha ha.

The Yankees weren't the only New York baseball team to make a Cincinnati connection.

In "The Boyfriend" episode, Kramer and downstairs neighbor Newman revealed that they despised Mets first baseman Keith Hernandez, whom Elaine was dating and on whom Jerry had a man crush. They claimed Hernandez had spit on them after a game.

However, Zapruder film-like footage of the incident revealed that it was Mets pitcher Roger McDowell on a grassy knoll who had delivered the "magic loogie."

McDowell, a notorious prankster in the major Leagues, is a Cincinnati native and graduate of Colerain High School.

One more Yankees connection involved a local product as a key member of the episode's cast.

In "The Secretary" episode, George, still employed by the Yankees, fell for his secretary because he was turned on by her efficiency. In a moment of passion, George shouted that he was going to give her a raise. He wound up persuading Steinbrenner to give her the raise but was shocked to find that it pushed her salary higher than his. George being George, this became a dilemma.

The librarian-like secretary Ada was played by Anderson High School and University of Cincinnati graduate Vicki Lewis. Lewis, who is best known for her role on the NBC sitcom "NewsRadio," has appeared in numerous movies and television shows.

Mr. Kruger could be best described as apathetic. He didn’t care about his company and was unfazed by any of the buffoonery happening there, including his own. He also had several great interactions with George, for example, nicknaming him Koko after a signing ape, questioning George’s fake Human Fund charity and participating in the Costanza family’s bizarre Festivus activities.

Von Bargen also had a role in Fox sitcom "Malcolm in the Middle" and appeared in several movies. Sadly, he died in 2015 at age 64.

Mr. Kruger wasn’t the only one of George’s bosses who had a Cincinnati tie. Gordon Jump played Mr. Thomassoulo, a good-natured boss who hired George at PlayNow, a playground equipment company.

Jump was not from Cincinnati -- though he was born in Dayton, Ohio -- but he does have a link via another sitcom. He played Arthur Carlson, the dim-witted station manager on "WKRP in Cincinnati." The man who swore turkeys could fly as he bombed them on the fictitious Pinedale Shopping Mall was also part of "Seinfeld" lore.

Mr. Thomassoulo went above and beyond to accommodate George when he believed he had a disability, but once he learned George was faking, he did everything possible to get him to break his contract and quit. George’s weaselly resolve to stay drove the former "Big Guy" nuts.

Reporting from the scene

This reference is pretty obscure.

In "The Limo" episode, George posed as someone else at the airport to get a limo for himself and Jerry. What he didn’t know was the limo was for a neo-Nazi leader holding a big rally in Manhattan. After picking up Kramer and Elaine for what they thought was a basketball game at Madison Square Garden, the gang arrived to an angry crowd who believed George was the controversial "O’Brien."

A television reporter describing the scene was none other than Jodi Baskerville. That name might ring a bell to anyone who watched Cincinnati TV news in the late '80s. Baskerville was an anchor at WKRC-TV at that time.

A look at Baskerville’s Internet Movie Database page shows she has built an impressive resume as a TV show producer over the years.

Aced out for Elaine

OK, this final one isn’t something that was actually on the show, but come on, you have to admit the first eight were impressive.

Among the actors who auditioned for the role of Elaine was Amy Yasbeck, according to Internet Movie Database. Yasbeck is a Blue Ash native who attended Summit Country Day School and Ursuline Academy. She is probably best known for her role on the NBC sitcom "Wings" and was married to the late John Ritter.

Others who were up for the part of Elaine, according to IMDB, included Rosie O’Donnell, Patricia Heaton and Megan Mullally.