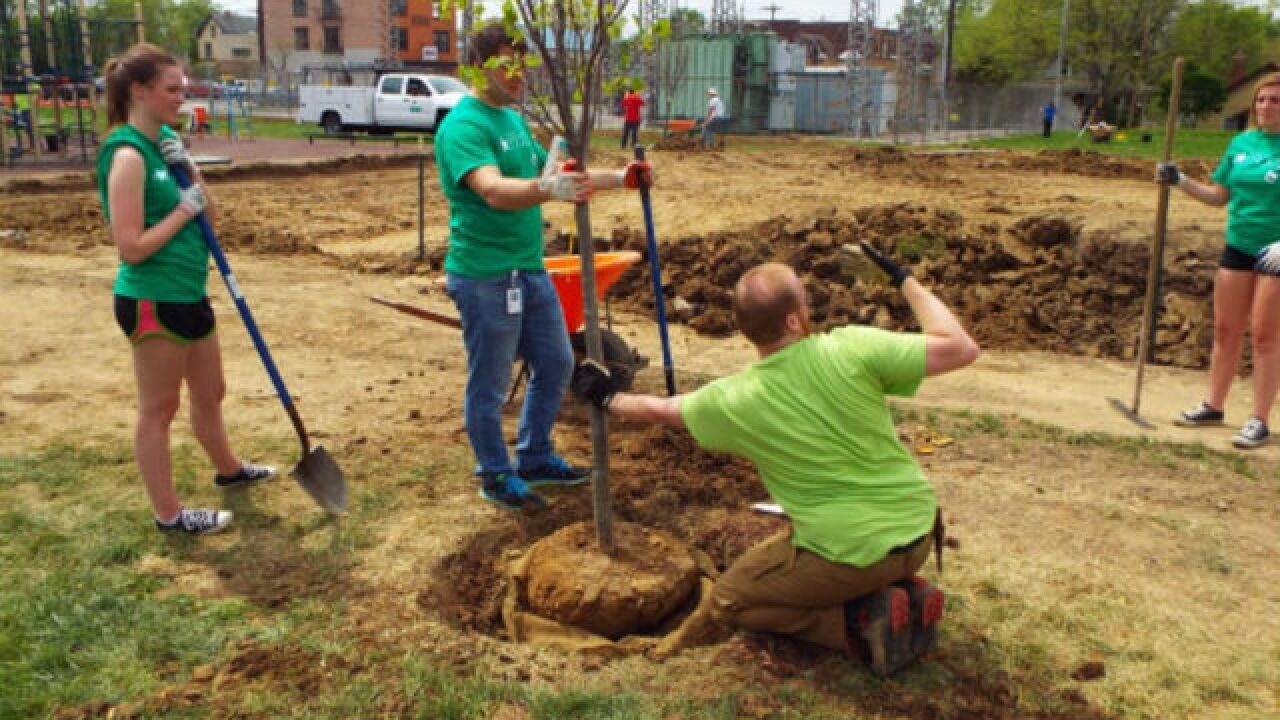 <p>McKenzie Martin, right, lets the rest of her crew know when the tree they are planting is standing up straight. Also pictured are Matt Stenger, executive director of Taking Root, kneeling; Nik Uryupin, holding tree; and Lydia Leytze, leaning on shovel Kevin Eigelbach</p>

CINCINNATI -- As he supervised the planting of 10 trees in East Price Hill’s Olden Playground on April 19, Matt Stenger also gave his volunteer tree-planters from Macy’s the do’s and don’ts:

It’s all part of the job for Stenger, the executive director of Taking Root, a nonprofit dedicated to seeing that 2 million trees are planted in the Tri-State before 2020. The Olden Playground project is typical of one way Taking Root does that.

Taking Root takes applications for tree projects from organizations that don’t have the money to pay for them – in this case, the Cincinnati Recreation Commission. Stenger asked Macy’s to contribute $1,000 for the Olden Playground project, which it did, along with giving employees time away from the office to help. Taking Root put up another $1,000 of its own money and purchased the trees from one of its partners, Holscher Hackman Garden Center.

Ten trees planted – only about 800,000 to go. Fortunately, any tree planted by anyone in the Tri-State counts.
Taking Root asks Tri-State residents who plant trees to register them at its website, and 188,000 have been registered since September 2013, when Taking Root was created. Stenger suspects that most who plant trees don’t register them, but he’s working with local nurseries to help make that happen.

The main objective isn’t meeting the goal, he said, but to get people thinking about the local tree canopy. Compared with other cities, Cincinnati can be proud, he said, that as of the most recent Cincinnati Parks survey in 2010, trees and forested areas covered 39 percent of the city, a slight decrease from the 2000 survey.

That’s better than cities such as Chicago (17 percent), Boston (29 percent) and Milwaukee (21 percent), but not quite as good as Cleveland (41 percent).

The 2010 survey showed that 16 neighborhoods lost at least 1 percent of their canopy, most of them in the eastern part of town, said Dave Gamstetter, natural resource manager for Cincinnati Parks. He attributed most of the canopy loss to the emerald ash borer, an Asian beetle whose larvae eats the inner bark of ash trees, which has devastated ash populations in the Midwest and East.

Because of the ash borer, Cincinnati Parks has spent more time and money removing dead trees from city parks and streets than it would like, Gamstetter said, but it’s still planting more than it removes. Over the past six years, it has planted 13,705 street trees and removed 6,165.

Another pest, the Asian longhorned beetle, is killing trees in Clermont County. The U.S. Department of Agriculture has quarantined 61 square miles there, restricting movement of logs, firewood and all parts of the trees. According to the USDA, more than 80,000 infested or high-risk trees have been removed since 2011, and 36,000 high-risk trees have been treated with insecticide.

When these pests kill trees, they leave holes in the forest canopy that should be filled by saplings, Stenger said. Instead, they are being filled by invasive plants such as honeysuckle, which smells nice but is a very aggressive grower. That makes it impossible for native forests to recover.

He also had harsh words for the flowering pear trees that subdivision builders love because they’re cheap and grow fast, calling them brittle and invasive. He asks residents to “see what your neighbors have and plant something different,” because diversity is key to fighting disease and insects.

Of course, another huge threat to the trees is people. Thousands of trees will be removed for the new Interstate 71 ramp in Avondale and the widening of Interstate 75, which will basically create a hole in the canopy from Carthage to the Ohio River, Gamstetter said.

It’s not clear if those trees will be replaced. Cincinnati Parks typically doesn’t have money for highway plantings, he said, and the Ohio Department of Transportation doesn’t typically plant trees by the highway either. ODOT will allow the city to plant trees if it agrees to pay for and maintain them, and the city is looking into that, he said.

Trees planted beside a highway do a great job of intercepting vehicle emissions before they get to residents, he said. They also have value in helping to slow stormwater runoff – the Cincinnati Parks report put the value of the city’s existing urban forest at $32.4 million – what it would cost to provide the same amount of stormwater protection and air pollution mitigation through other means.

Communities can help preserve trees simply by adopting ordinances that prevent developers from bulldozing them, Stenger said. “A lot of communities are already doing well,” he said. “You can tell when you walk through them – there are just loads of gigantic trees.”