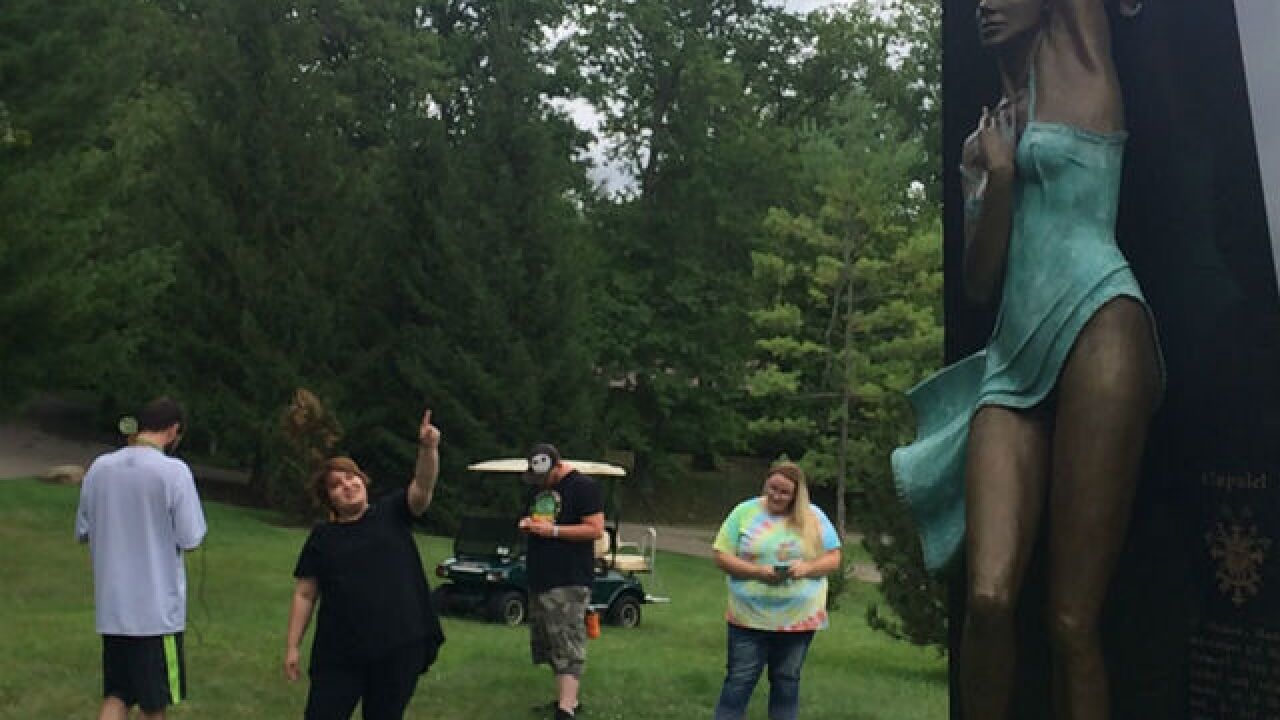 HAMILTON, Ohio -- Jeni Barton can’t say quite how it happened, but she's certainly not complaining.

Pokemon Go quickly became a global craze, and it's also made Hamilton's Pyramid Hill Sculpture Park one of the hottest game stops in the state.

The Hill, an attraction known mostly around the Tri-State for its holiday lights display and funky outdoor monuments, is now also home to hundreds of Pokemon creatures, seven Pokemon Go gyms, or battle arenas, and around 60 PokeStops, places where players can go for supplies, said Barton, the park's director of programming and administration. The latter is more than some whole towns. It's also considered the most at any one place in Ohio -- an unconfirmed claim, but one that's also gone undisputed outside these 300-acre grounds.

Although some museums and places of business have banned or discouraged the game, Pyramid Hill has overwhelmingly embraced it. And for good reason. Attendance -- about 32,000 visitors come and go annually -- jumped 18 percent during the first week and has held steady. The park is attracting a whole new demographic. Although their wheelhouse is young families and senior citizens, Pokemon Go is bringing in more 20-something youths, a target market officials have been working hard to attract. And most of those are first timers.

"That's been great, because we didn't do anything for this to happen," Barton, the park's director of programming and administration, said. "We got lucky. We didn't have to do any planning, we didn't have to throw any funding at it. We just woke up and people started showing up to play Pokemon."

Count friends Shaun Walker, AJ Hutch and Jamie Freels, all Hamilton residents, among those people. They heard Pyramid Hill was a hot spot, so they came out on a recent Thursday afternoon. And they came prepared, too, equipped with large, portable battery chargers in hand, in case their cell phones got low.

For Walker, it was his second time at Pyramid Hill, but his first time inside the park's Ancient Sculpture Museum, where a handful of Pokemon were caught. A few more were captured at "Wherefore Art Thou," a Romeo and Juliet-inspired piece outside its doors, one of roughly 60 outdoor sculptures scattered throughout the park.

"I've been playing since like day one; I played the original game when I was a kid," he said. "There's a bunch (of Pokestops here), and they're usually not that concentrated."

To Barton, the sculpture museum, built in 2007, is really the only area of concern when it comes to Pokemon Go. The 10,000-square-foot building houses a careful collection of Greek, Roman, Etruscan and Egyptian sculptures -- the oldest of which dates back to 1550 BC -- and most of the antiquities are displayed uncovered in accordance with founder Harry T. Wilks' wishes.

The park keeps a docent on staff to give an extra sense of security. So far, there haven't been any issues.

"Outside, you can't really hurt the sculptures, but in here, we don't want anyone backing into a 3,000-year-old sculpture trying to catch a Jigglypuff," Barton said.

Although a few have scoffed at Pyramid Hill's admission price ($8 for adults; $3 for kids), Barton is hoping an upcoming free event will wrangle a few more Pokemon players. The park's next museum gallery series, an artist meet-and-greet, is scheduled for 5:30-8:30 p.m. Aug. 19, and in conjunction, Pyramid Hill is holding a Pokemon Safari competition for interested players.

"We want to change what people know about the park. It's a little hidden gem, and my job is to get rid of the hidden part," she added. "Once they come, it sells itself because it's amazing -- it's always more than people expect."

In time, all fads fade, but for now, Pyramid Hill is enjoying its recent spike of success. It's likely Walker, Hutch and Freels will be back -- and they'll tell their friends about it, too. The three help moderate a Facebook page for fellow Hamilton Pokemon Go players. And, that day, they left the park on a high note.

Hutch caught a Charizard, considered one of the more rare characters, at the Triumph statue. For Barton, the fact he could ID the art means mission accomplished.

"The great part about the game, and the part I like most, when you go up to a PokeStop, it shows you information about it," she said. "I get excited when they know the names of the sculptures, and that makes me really happy."